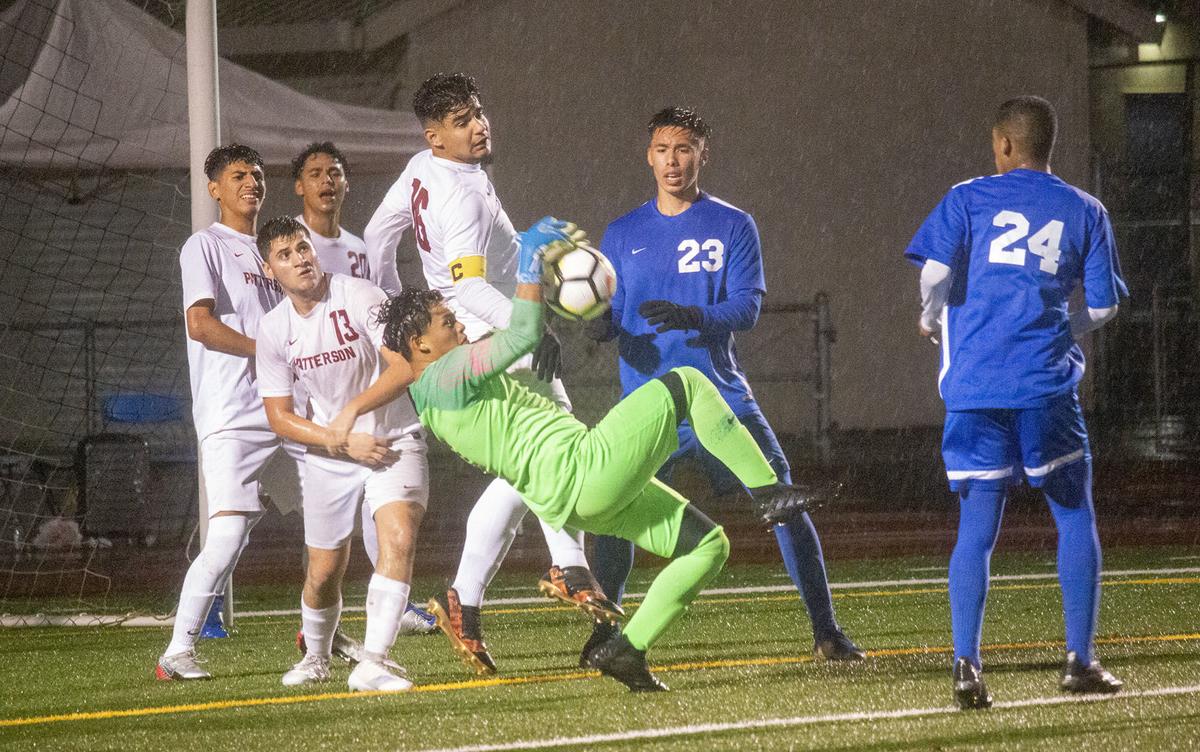 The Patterson offense forces a save from the Turlock goalkeeper on Dec. 2 at Turlock High. 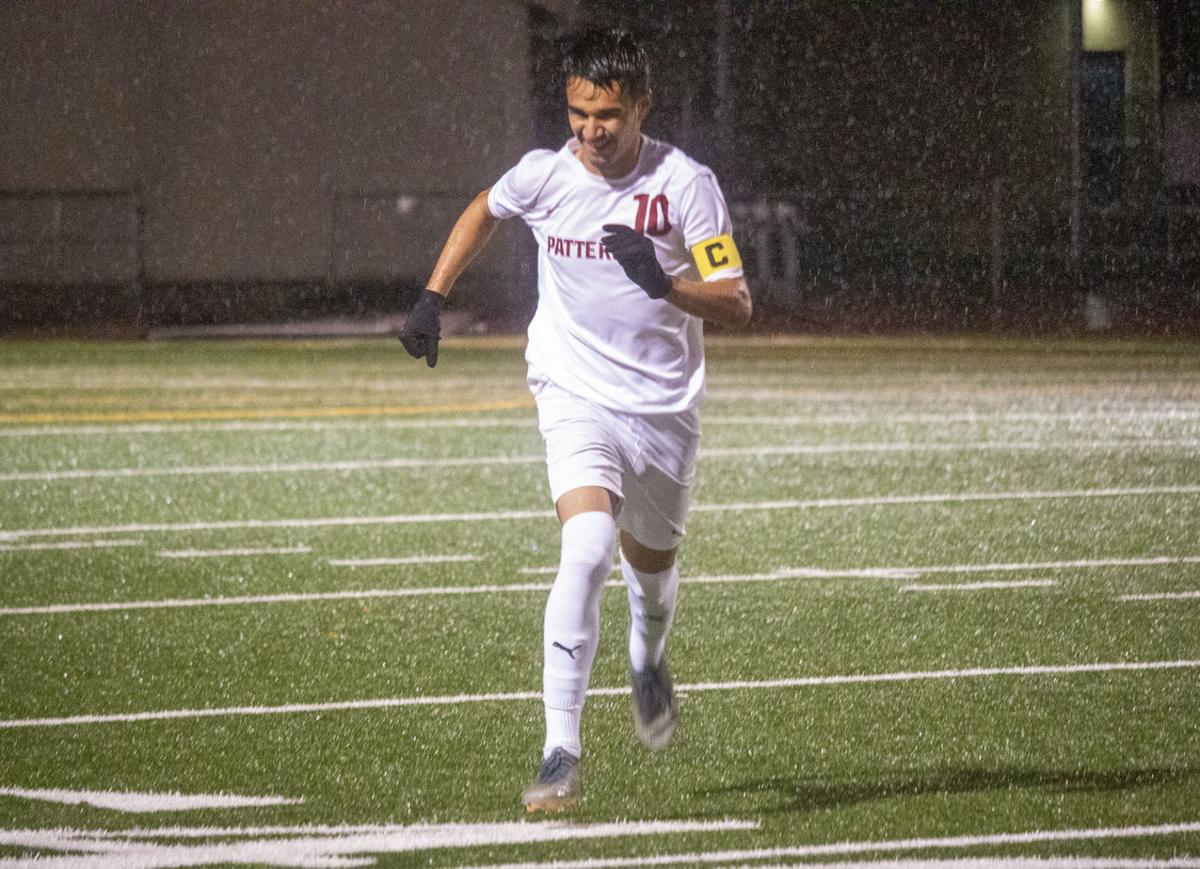 Sophomore Jonathan Gallardo runs towards the ball during the opening minute of the match on Dec. 2 at Turlock High. 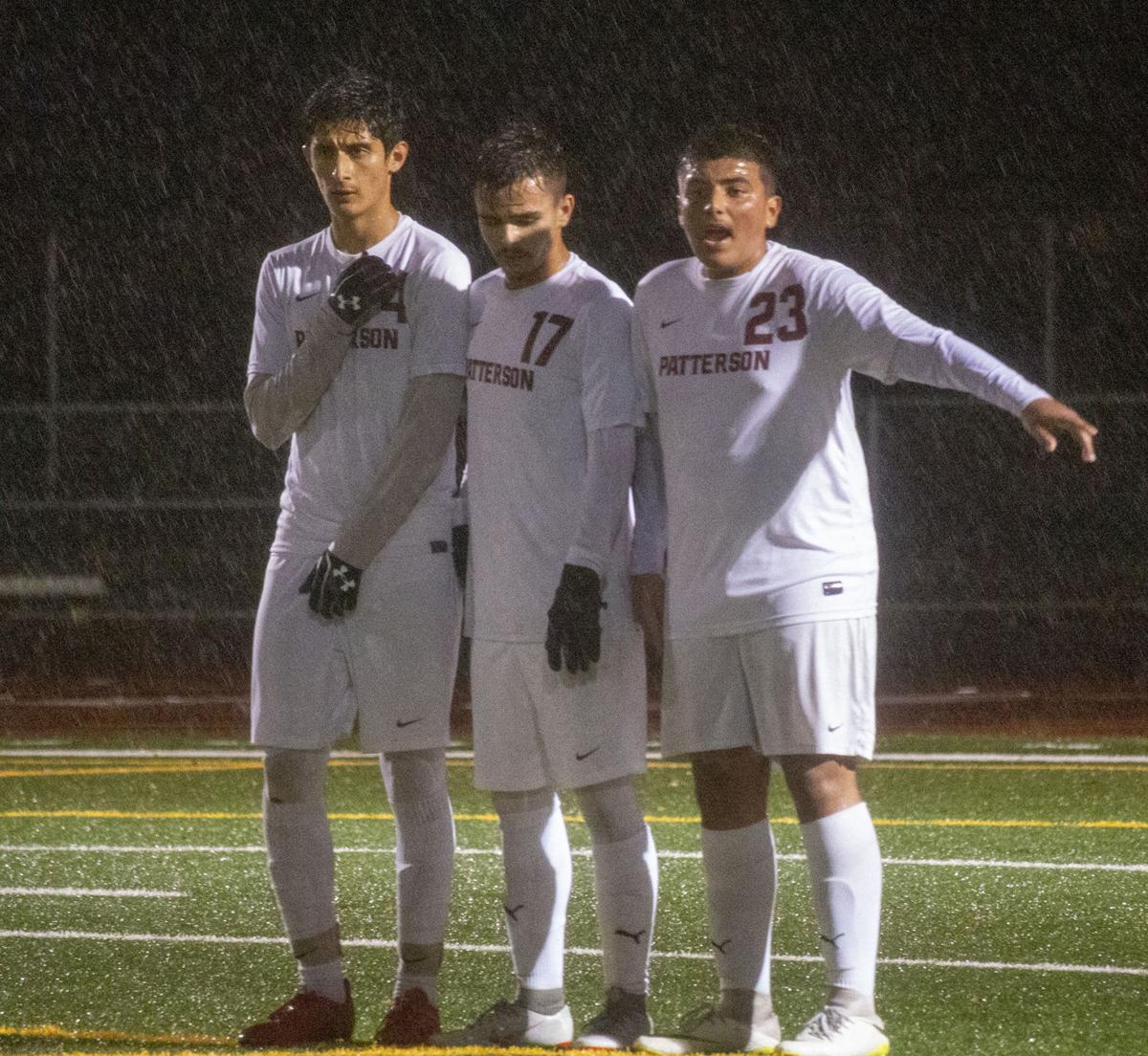 From left to right: sophomore Rafa Villasenor, junior Nathaniel Farah and senior Cesar Casillas form the wall during a free kick on Dec. 2 at Turlock High. 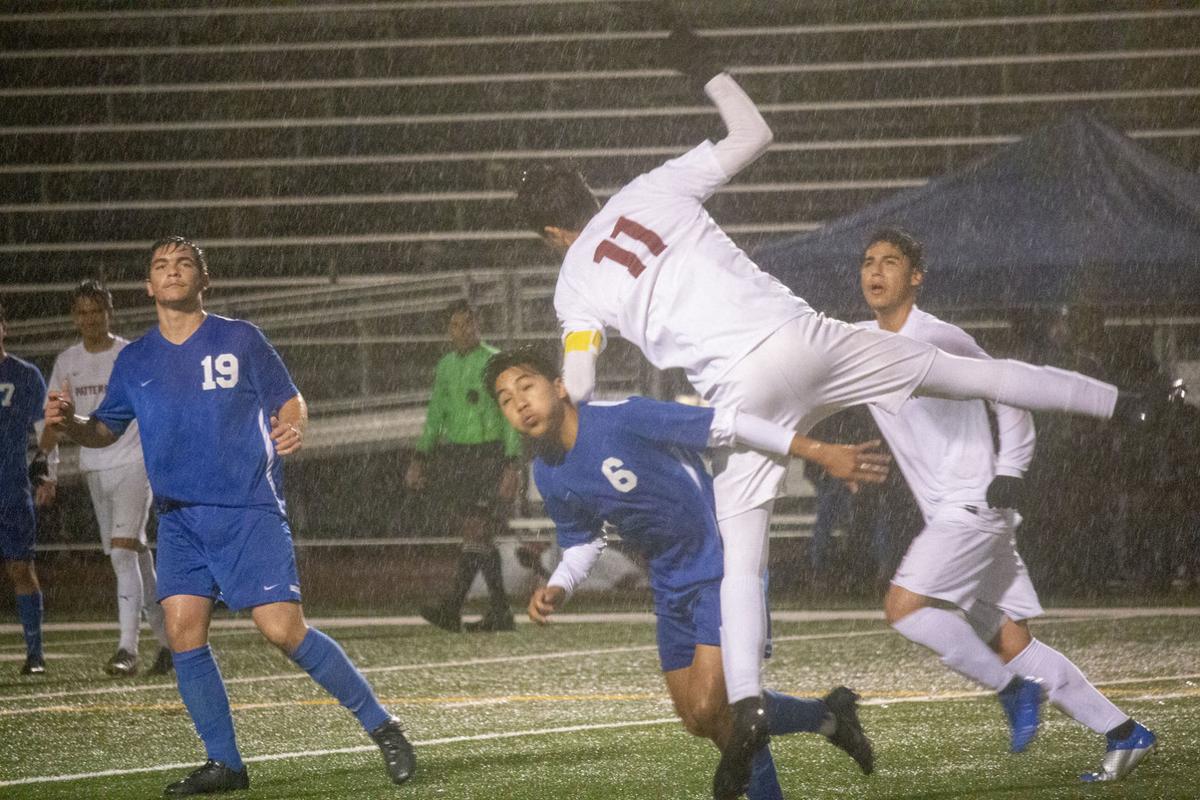 Sophomore Antonio Gallegos leaps up for a header attempt on Dec. 2 at Turlock High. 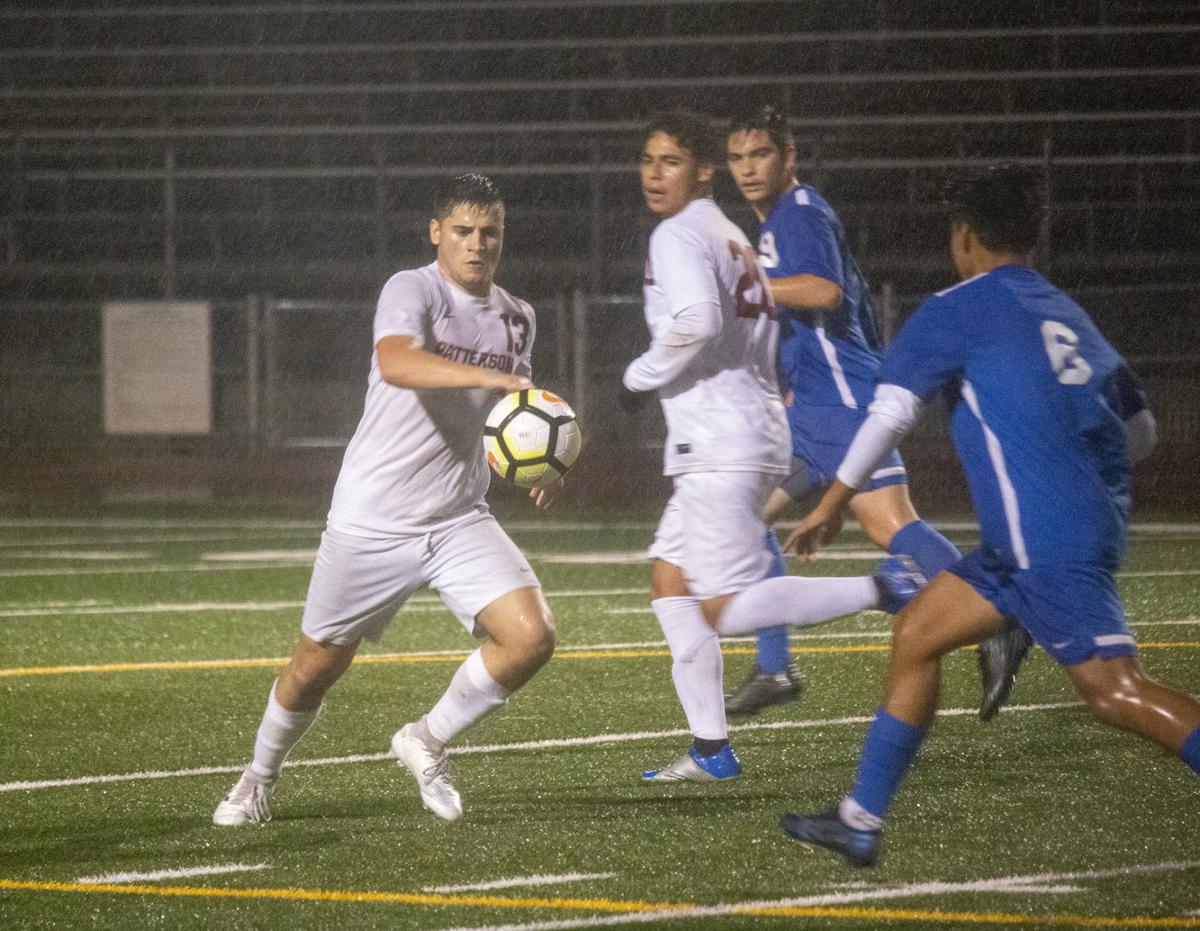 The Patterson offense forces a save from the Turlock goalkeeper on Dec. 2 at Turlock High.

Sophomore Jonathan Gallardo runs towards the ball during the opening minute of the match on Dec. 2 at Turlock High.

From left to right: sophomore Rafa Villasenor, junior Nathaniel Farah and senior Cesar Casillas form the wall during a free kick on Dec. 2 at Turlock High.

Sophomore Antonio Gallegos leaps up for a header attempt on Dec. 2 at Turlock High.

Dark clouds and heavy rain has been the setting of the last couple matches for the Patterson High varsity boys soccer team, but despite suboptimal conditions the Tigers came out the gate with a hot start this season.

Four goals in the second half helped push Patterson past Downey High on Nov. 27, before the Tigers overcame Turlock with a pair of goals in the final 15 minutes to defeat Turlock 3-2 on Dec. 2.

With wins over Downey and Turlock, the Tigers have improved to 3-0 to start the 2019-20 season. This mimics last year’s 5-1 start to begin the 2018-19 season, but head coach Luis Torres shared that he hopes his young returning players build on that start and use the experience from last year’s campaign.

Although the rainfall factored into everything the players were trying to do on the pitch, from how the ball came off the foot, insecure footing, and loosening the grip on throw-ins, Torres explained that in some regards the wet conditions could aid his squad.

“Our current team is talented. We are good technically, that playing under the rain can be an advantage; it allows us to move the ball faster,” Torres said.

Patterson had an out-of-conference game against old Western Athletic Conference foe in Ceres High on Dec. 4 after press time.

The Tigers are then set to host returning CIF Sac-Joaquin Section Division II runner-up Central Valley High on Dec. 10. The Tigers split the season series against the talented Hawks team last season. With 17 players returning from the 2018-19 roster, Central Valley will be a formidable challenge for anyone in the Central California Conference. That game is scheduled for 6 p.m. at Patterson Community Stadium.

The clock continued to tick away, and yet Patterson was unable to produce with the same offensive intensity they created in the first 25 minutes of the game. But the Tigers did not give up on a match that was an easy one to let slip by, given the rain consistently pounding the players and field throughout the match.

Yet despite the conditions and deflating comeback from Turlock the Tigers hung in there, and with 15 minutes left in regulation found a spark when sophomore Jonathan Gallardo placed a corner kick well, giving junior Adrian Melesio the chance to leap up and strike a header that slipped past the Turlock defense and in for a goal to tie the affair up at 2-2.

Patterson seized on the momentum and continued to press the Turlock defense. Three minutes later that perseverance was rewarded, when junior Isael Medina received a great cross from senior Oscar Rodriguez. Medina took full advantage of the well-placed pass by striking it in for a goal, to give Patterson a 3-2 lead with 11 minutes left.

Turlock attempted to build several attacking plays over the course of the final minutes of the match, but the Patterson defense came up strong when needed to cling to the 3-2 victory.

“We came back the last 15 minutes with two goals that were key! We need to learn to keep composure under pressure. We were able to shake it off (back-to-back goals from Turlock) and keep playing how we have the last games, and win. Our ultimate goal is to keep the intensity and stay consistent for 80 minutes,” Torres said via email.

Just as the match against Turlock featured pouring rain, the Tigers were equally as drenched at Downey High on Nov. 27.

The two squads played to a 2-2 draw through one half of play, but the Patterson offense exploded with four goals in the second half, to topple the Knights 6-2.

This was the first time the two teams have played each other since 2014, when the Tigers defeated the Knights 2-0.

Gallardo was big for the Tigers, with two goals and an assist last Thursday.

Senior Ricardo Jimenez also scored a pair of goals. Junior Nathaniel Farah scored one goal, while Medina put up one goal and one assist in the win.