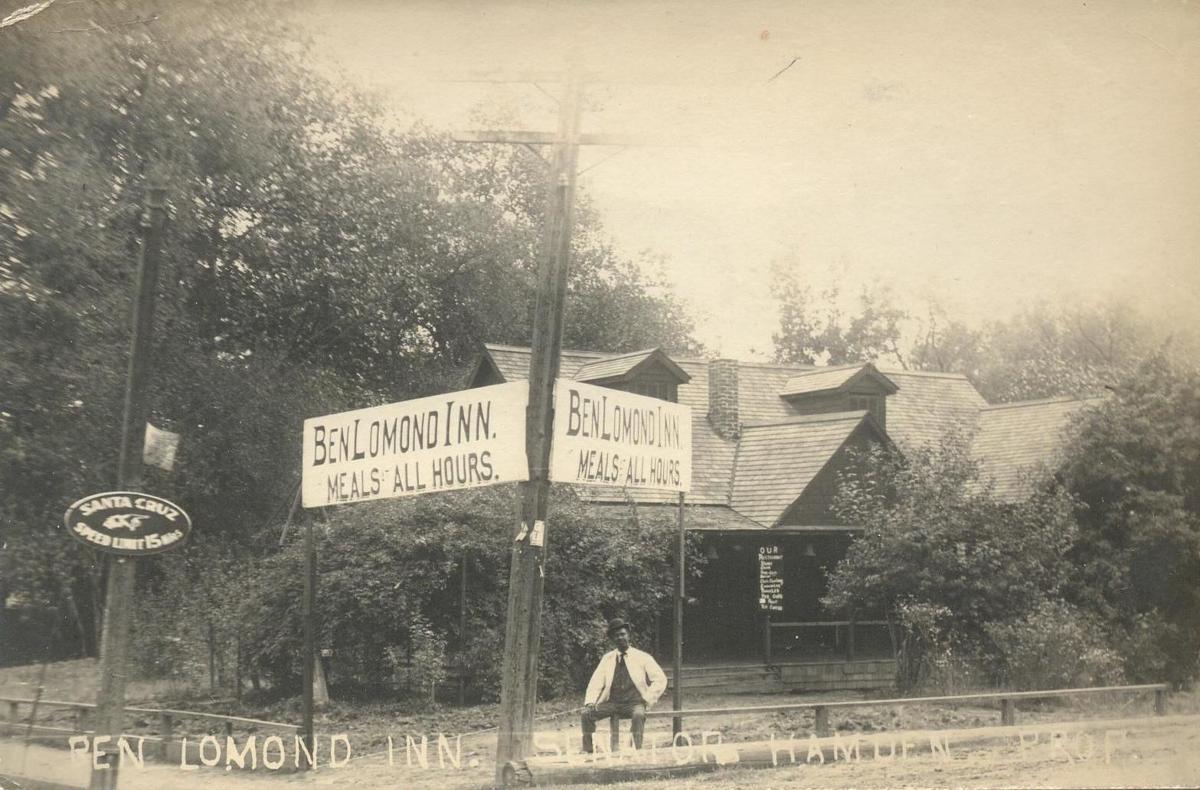 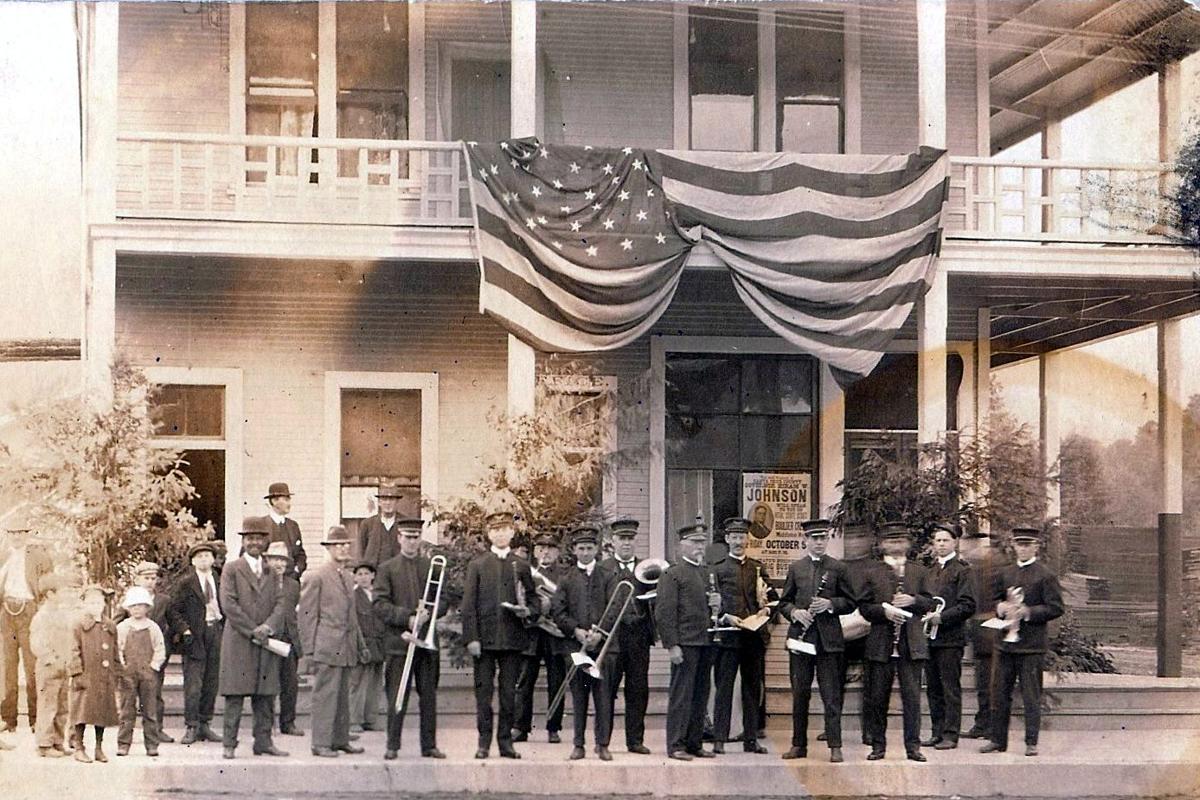 A photograph taken in Boulder Creek on the occasion of Governor Hiram Johnson’s visit in October 1914 shows a crowd in front of the old Commercial Hotel, now the site of Johnny’s Market.  One individual—a well-dressed Black man in a derby hat—seemingly well-aware of the camera, stands out.  Who was he?  His identity is revealed in another photo in which he poses in a white coat and the same hat, advertising the “Ben Lomond Inn.  Senator Hamden, Prop.”

His given name was James Adolphus Hamden, but several generations of audiences knew him as “Senator.”  At times he claimed to have served a brief term in a Southern legislature, but in reality, his stage name originated as a joke—a play on the name of racist Southern Senator Wade Hampton.

Hamden first paraded into Santa Cruz in June 1883 along with a brass band, one of “25 Legitimate Colored Artists” in Scott’s Jubilee Singers and Black Burlesque Opera Troupe.  It is likely that his fellow performer, ballad singer, and cornet player Miss Georgia Chester, whose father worked at the Santa Cruz Opera House, showed her friends the town.

The popularity of blackface minstrel shows, as obnoxious as they were in many ways, provided an opportunity for talented young Blacks.  After arriving in San Francisco from his native Barbados during the 1870s, Hamden became a member of various “colored minstrel” companies.  His “splendid barytone voice” contributed to the rendering of plantation songs and hymns, but his forte was comedy, especially “stump speeches,” mocking the oratorical style of the day, which frequently brought down the house.

In the summer of 1889, after a tour of the West, including Denver, Omaha, and Los Angeles, Senator Hamden returned to Santa Cruz as one of a “Consolidation of Black Stars!”  After appearing at the Opera House, the minstrel show played Boulder Creek where, before entertaining a full house, they advertised their arrival with “a Grand Uniform Street Parade, Headed by the World’s Greatest Drum Majors.”

During the 1890s, Hamden was involved in a wide variety of entertainment ventures, many of them successful.  In San Francisco, several thousand spectators paid to see a cakewalk, applauding couples strutting to tunes including “Ta-ra-da-boom-de-re.”  In San Jose he partnered with Bert Williams and George Walker, a comic duo on their way to national fame.  His performance of the titular role in “Uncle Tom’s Cabin,” won critical acclaim in a production that added songs and “a voodoo scene.”

As the century turned, Senator Hamden formed his own company, known as the “Black Kentuckians.”  Big city audiences wanted newer forms of entertainment—vaudeville, melodrama, and motion pictures—but minstrel shows were still welcome in smaller venues, including Boulder Creek.  After half a dozen years of travelling throughout California and other Western states, box-office receipts dwindled steadily, as the original 25-member troupe shrank to a handful of performers.  Once-friendly newspapers increased Hamden’s woes.  After what proved to be the final visit of the Kentuckians to Boulder Creek’s Fireman’s Hall in February 1906, the Sentinel hoped “that such a poor show will not last till the next town is reached.”  Hamden’s minstrels gave up at the end of the year, after a frustrating visit to Colorado and Utah.             The Senator’s next public appearance garnered considerable publicity, much to his regret, as his wife won a divorce on grounds of cruelty: “Mrs. Hamden testifying that her spouse called her bad names.”  Several weeks later, her ex-husband landed in the Marysville city jail on a charge of vagrancy.

Before 1910, Senator Hamden moved to Santa Cruz, where he rented a room in the local Chinatown and staged “what might be termed a black and white minstrel show,” featuring local talent.  The event may have been an artistic success, but it failed financially, generating more bad press.

Fortunately, the entertainer’s friends helped him find a new niche.  In June 1911, the Mountain Echo of Boulder Creek, noted that “The original Senator Harry Hamden is with us once more—and this time for keeps.  He has rented a place for a short order, up-to-date Restaurant, at reasonable rates.”  His organizational skills were also valued by the proprietors of the town’s Commercial Hotel, old friends from San Jose. When the San Lorenzo Valley Board of Trade held its annual dinner in March 1912, Hamden’s catering drew positive reviews.  “Senator Hammond, once of Santa Cruz,” noted Sentinel editor Duncan McPherson, one of the guests, “was in charge of the banquet Saturday night, when all went merry as a marriage bell.”  The Mountain Echo reprinted the item, misspelling and all, under the heading “Of Such is Fame.”

Prohibition was a major issue in Boulder Creek, where hotel men were only allowed to serve liquor with meals.  When one local accused his friends of violating the ordinance, Hamden appeared on the witness stand, where his comical testimony brought down the house.

When the Senator’s associates left Boulder Creek in 1913 to take over management of the Redwood Park Inn at Big Basin, they recruited him to help.  When that contract ended, Hamden was able to open another restaurant in Ben Lomond, where he posed proudly in front of a sign offering “Meals at All Hours.”  An added attraction of his new location was the town’s recently opened theater, where his skills were once again in demand.  “Park Hall was crowded on Wednesday evening,” reported the Mountain Echo after one show, “to witness the performance given by Senator Harry Hamden and his troupe of amateur minstrels, who kept the house in a gale of laughter for two hours.  After the show an all-night dance was enjoyed.”