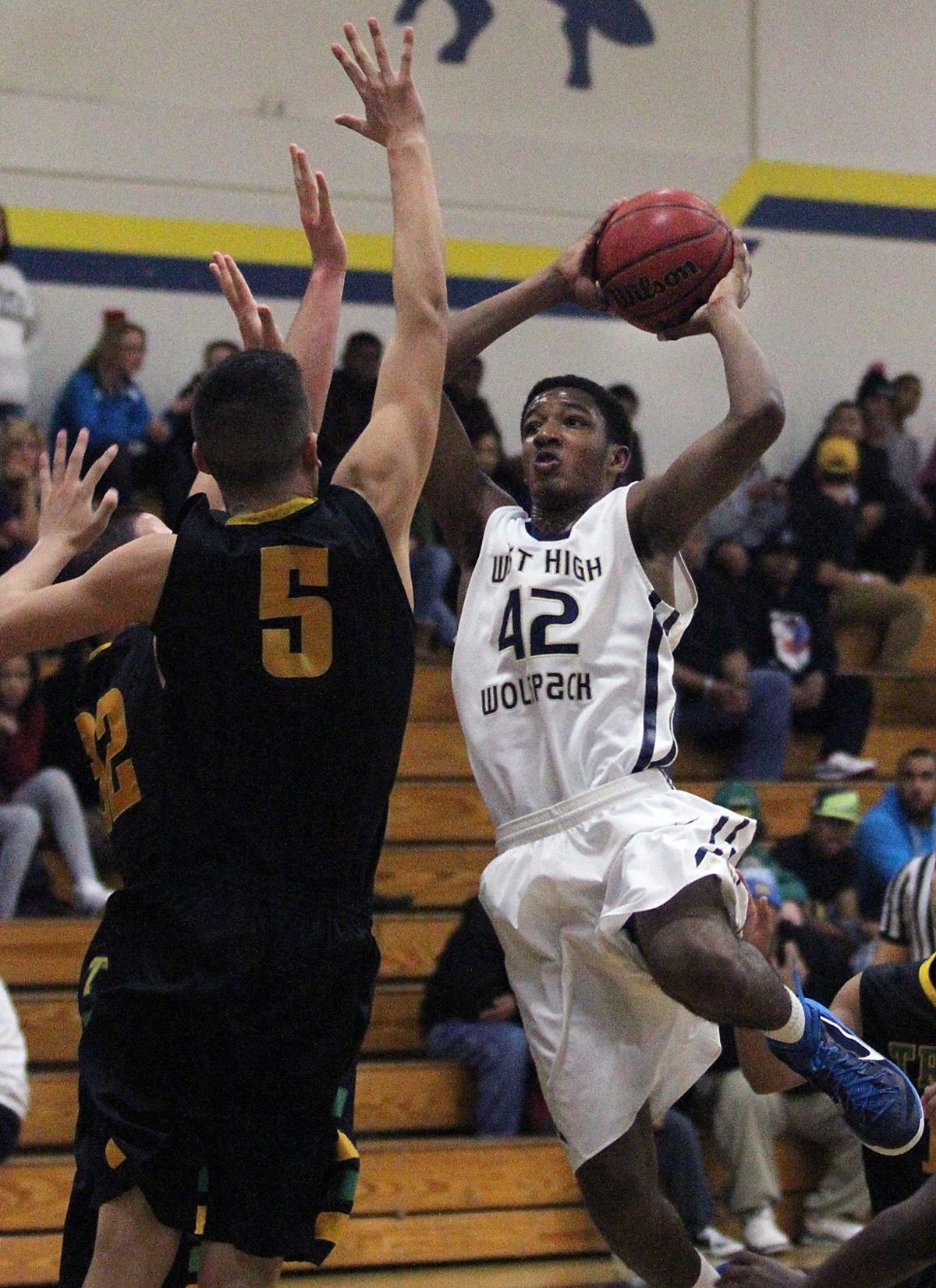 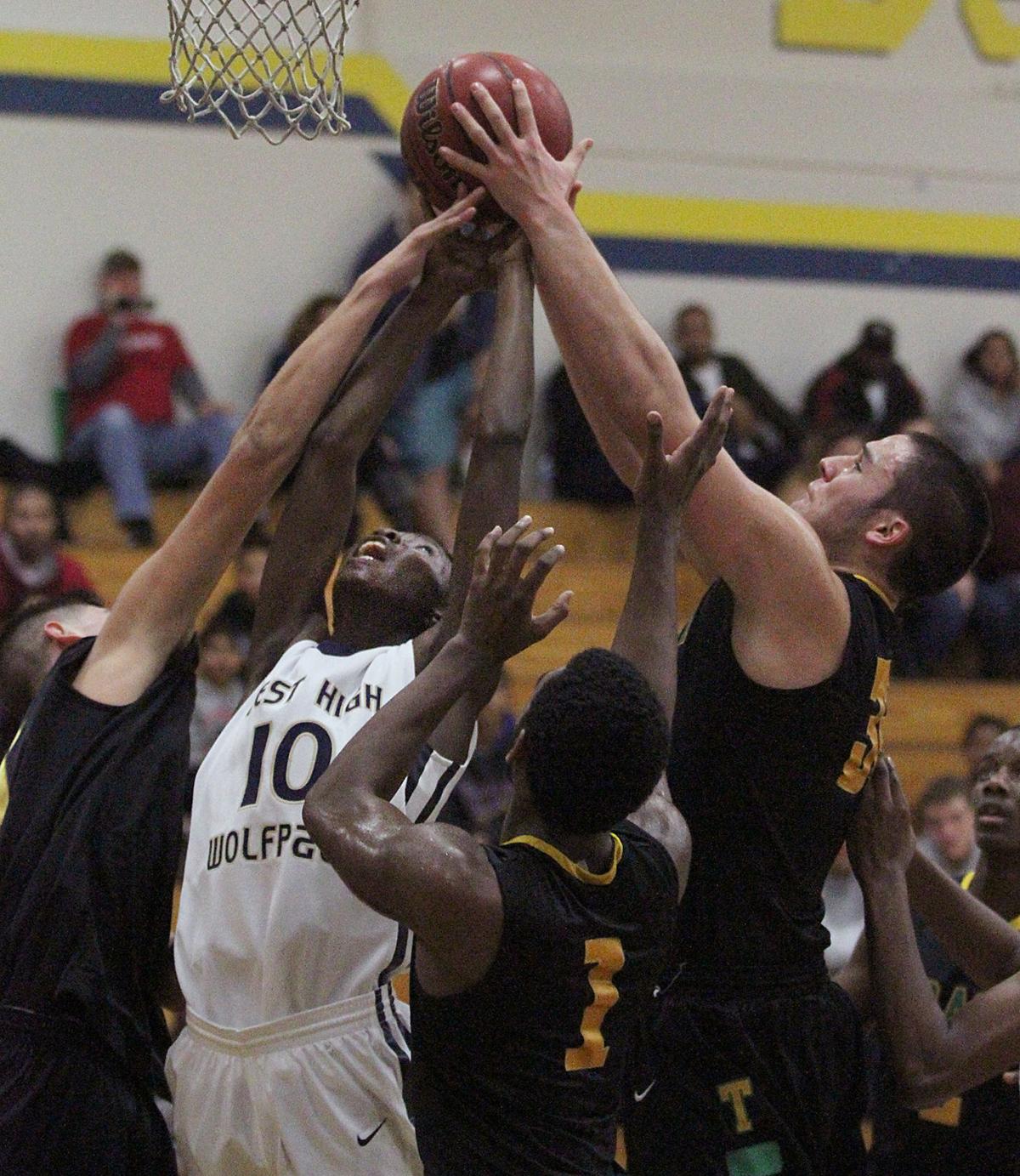 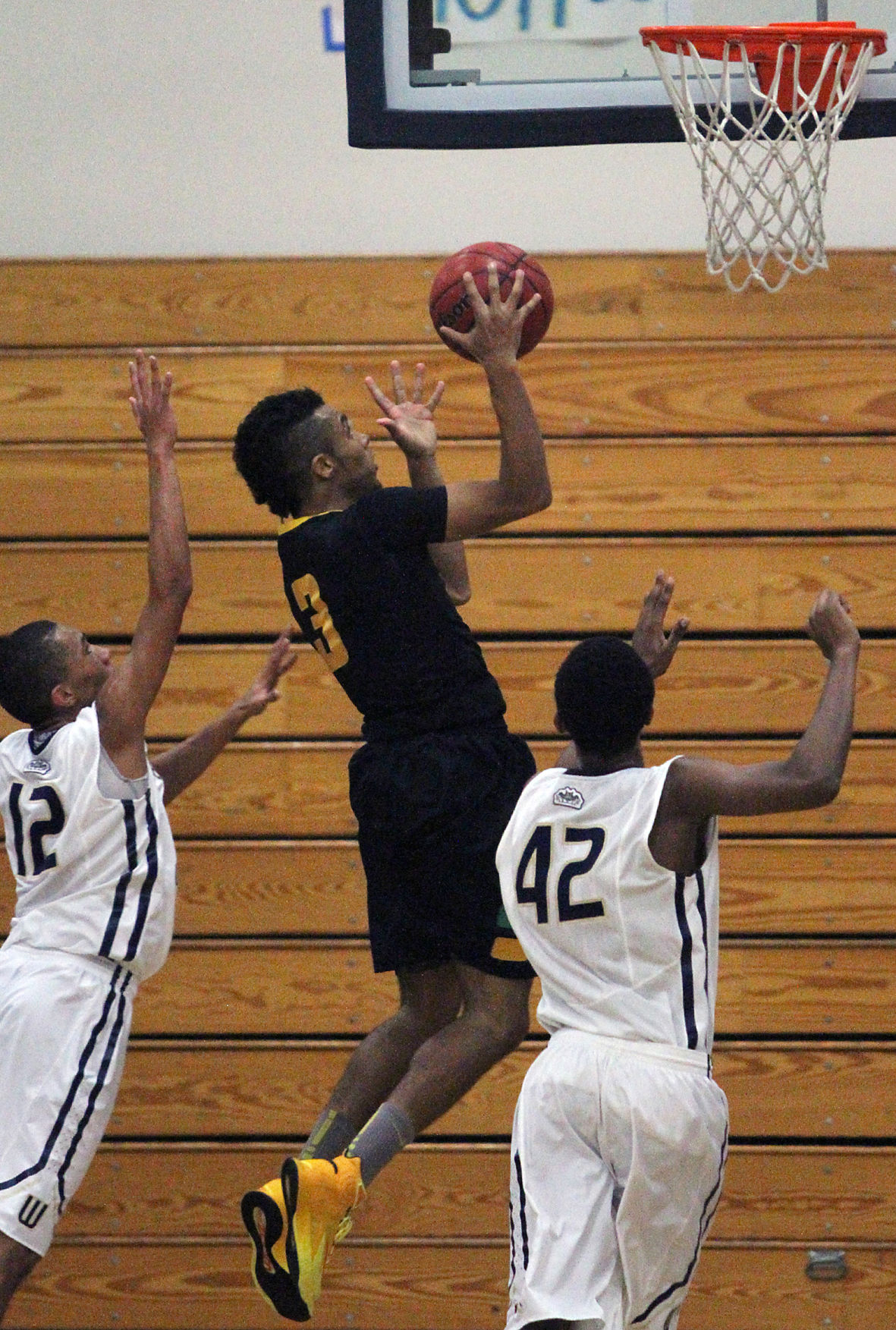 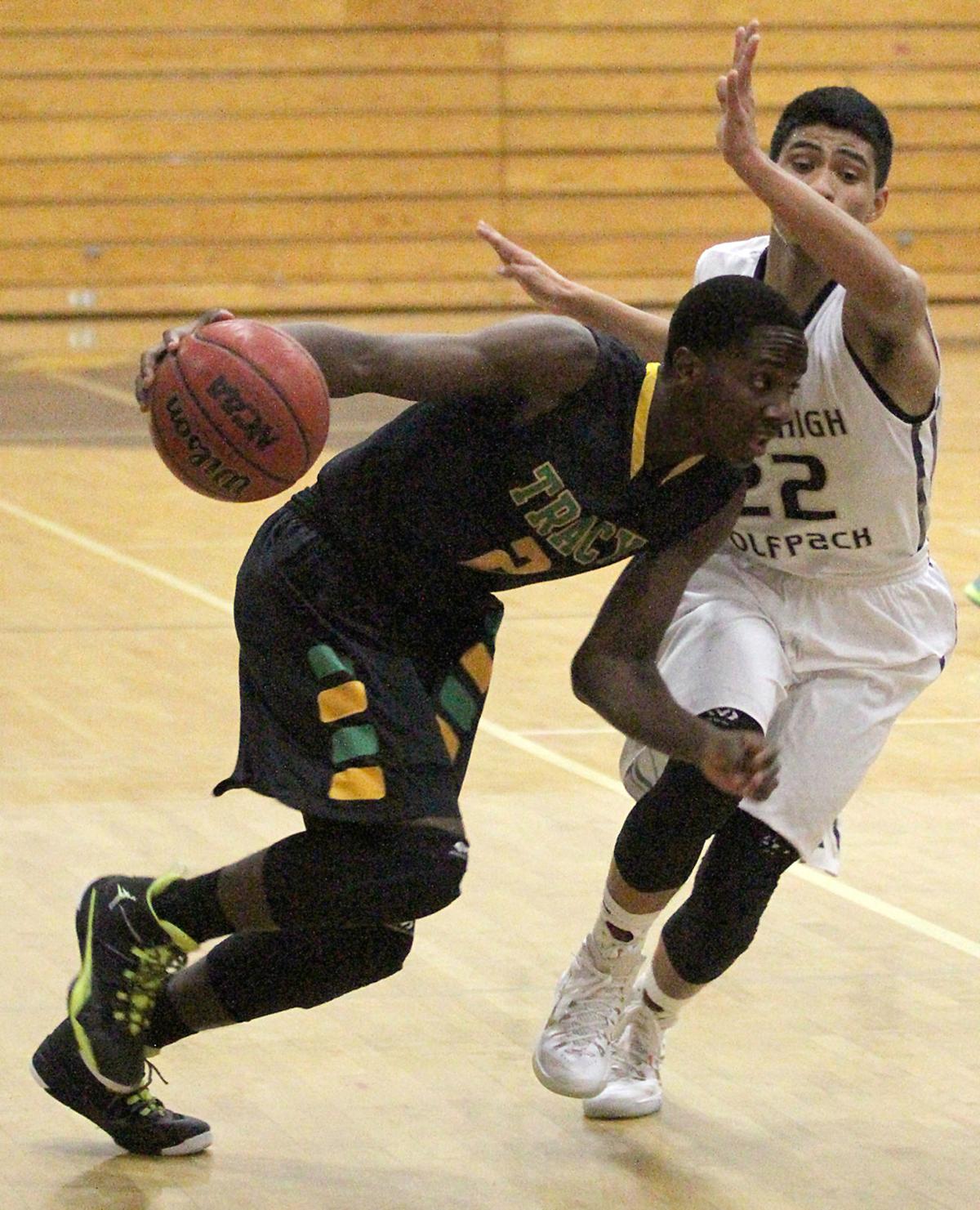 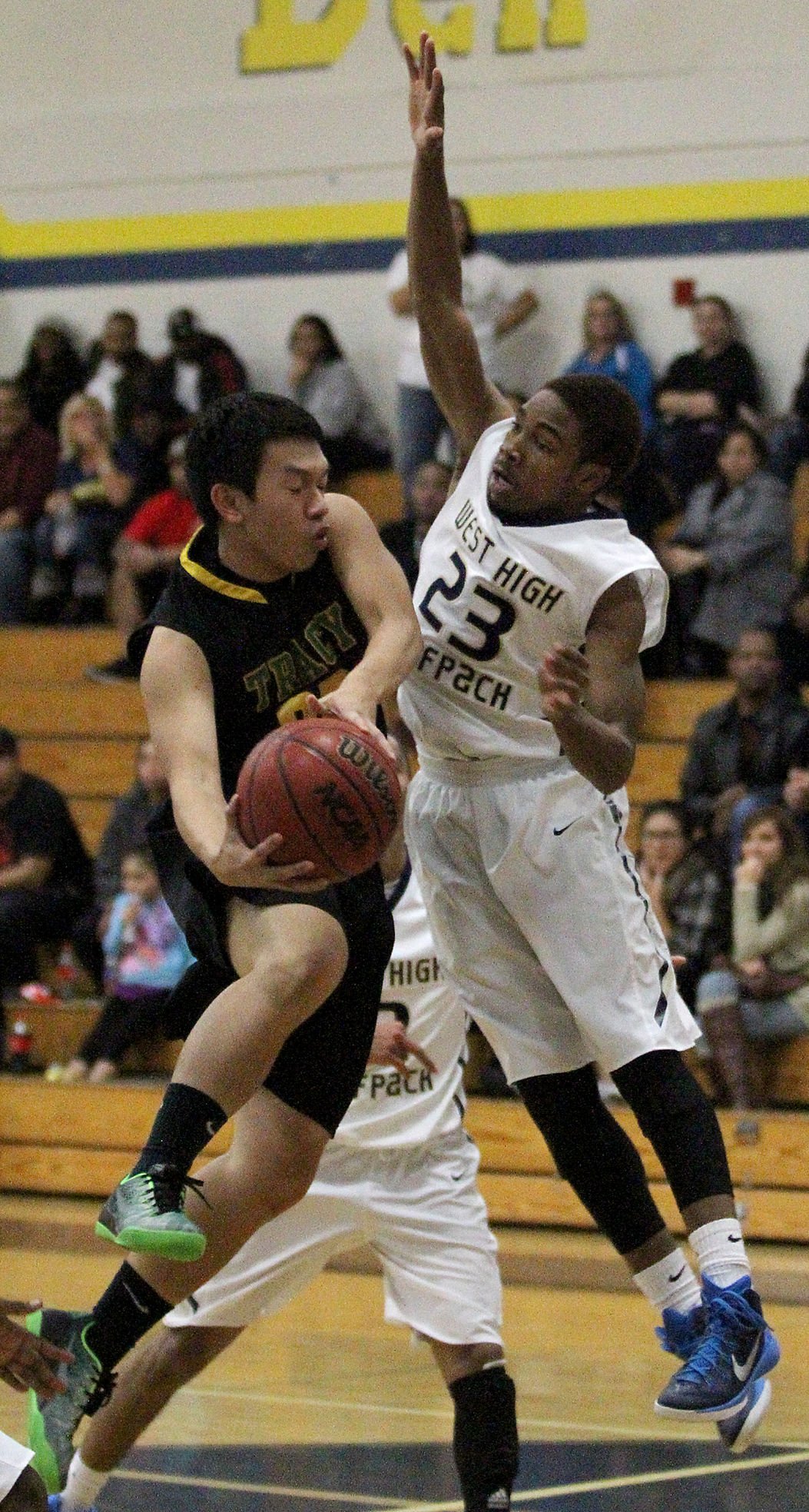 Tracy High senior Jeffrey Nguyen (left) heads to the basket as he is defended by West High senior during the championship game of the Tracy/West Winter Holiday Classic tournament Saturday at West High. 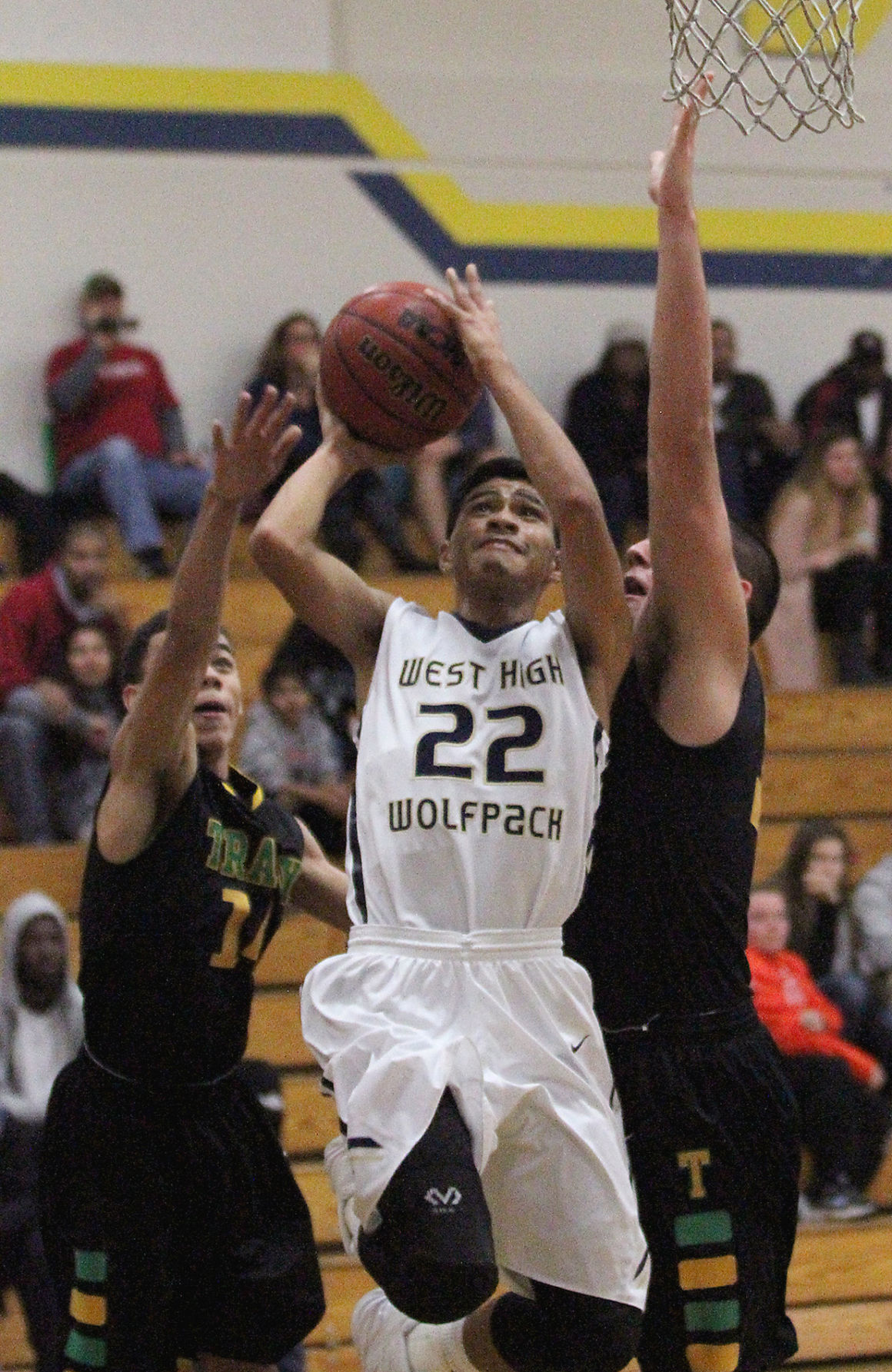 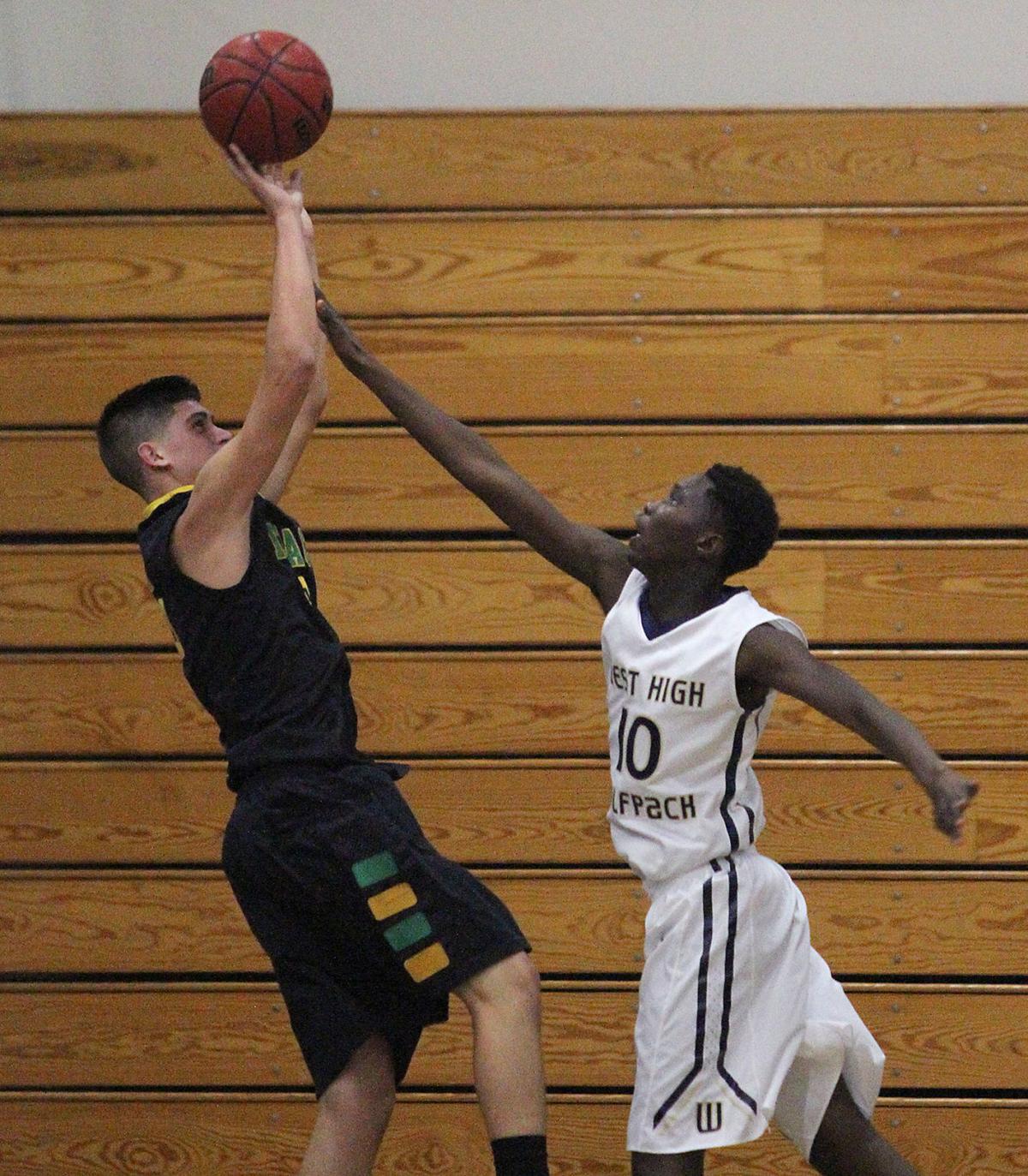 Tracy High senior Jake Serrato (left) throws a shot up as West High senior Maxwell Aduako gets a hand in the way during the championship game of the Tracy/West Winter Holiday Classic tournament Saturday at West High. 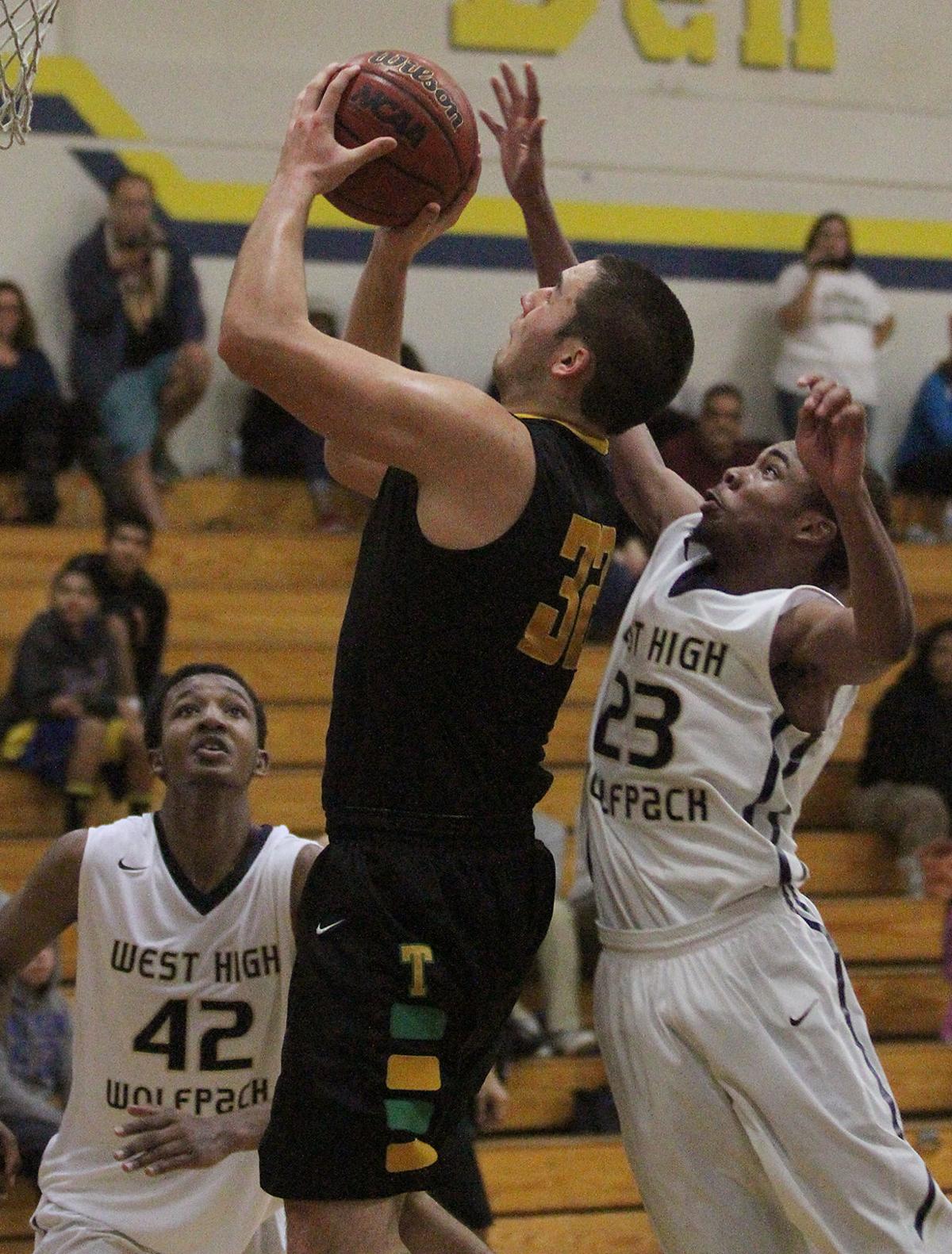 Tracy High senior Jeffrey Nguyen (left) heads to the basket as he is defended by West High senior during the championship game of the Tracy/West Winter Holiday Classic tournament Saturday at West High.

Tracy High senior Jake Serrato (left) throws a shot up as West High senior Maxwell Aduako gets a hand in the way during the championship game of the Tracy/West Winter Holiday Classic tournament Saturday at West High.

The finale of the West/Tracy Winter Holiday Classic basketball tournament kept up the trend, as West came from behind at the end and held on for the 55-53 win against the Bulldogs Saturday night at West’s Steve Thornton Gymnasium.

Tracy was ahead for most of the second half, but in the final half-minute West senior guard Isaiah Grady made the go-ahead shot, and then Grady denied the Bulldogs a chance to score when he made a steal with 12 seconds left. West threw the ball out of bounds before it could pad its lead, but Tracy guard Druce Asah’s last-second 3-point attempt bounced off the rim as the clock ran out.

It’s the fifth consecutive year that West has won the tournament, and the second year that West beat Tracy in the closing seconds for the championship.

“This is our own tournament. To not only win it but to hold it down for the fifth year in a row, it means a lot to be a part of that ongoing legacy here,” said West senior guard Elijah Tuando, the tournament most valuable player and West’s leading scorer with 20 points, including three 3-point shots.

“I think they just made one more play than we did. That’s what it came down to,” Cueva said.

“I feel like we played better as a team and have a lot more talent them, but they worked really hard and hard work beats talent every time,” he said.

West held the lead for most of the first quarter, and Tracy caught up midway through the second quarter, held a 29-23 lead at the half, and was ahead by as much as eight points in the third quarter.

Much of the competition was for control inside the key, and was a fight on the boards for possession. West sophomore Ephraim Estell pulled in 18 rebounds and Tracy senior Nate Brown collected 21 rebounds.

Brown said the that level of competition is expected in a game against West.

“Crosstown rivalry, it’s going to be a really emotional game,” Brown said. “Every player on that court is going to give it 100 percent.”

Estell, who also scored all of his 13 points in the second half, said the Pack sped up the pace of the game in the third quarter

“We had to turn up our intensity and we never thought we were going to lose the game,” he said.

West chipped away at Tracy’s lead and tied it up 45-45 midway through the fourth quarter and pulled ahead on a shot from Estell. Tracy got the lead on a 3-pointer from Asah. At the end West got a pair of free throws from senior Demariea Williams and a shot from Grady to pull ahead.

“We got back to it in the second half,” West coach Derek Sprecksel said. “We made our share of mistakes but we kept persevering. This group never gives up, no matter what the situation. They played for each other all 32 minutes.”

In addition to MVP Tuando, West’s all-tournament players were Grady and Estell.

The Kimball Jaguars clawed their way back from an early deficit, but their best chance to take the game back at end was lost to a time-out call.

With 12 seconds left and East Union up 53-50, the Jaguars had the ball and tried to set up a 3-point shot. When the play didn’t unfold as expected the Jaguars improvised and got the ball to senior Sai Padhy, who made the shot from outside the arc to try to tie it up.

Before the ball left his hands, though, Kimball coach Justin Gregory called a timeout, only to watch the ball go through the net. They tried the play again, this time missing the last second shot.

“It was a broken play and we weren’t getting the first shot we were looking for or the second option,” Gregory said. “I was afraid we were going to go in for a 2-pointer and we needed a 3 right away.”

“Had we come out like we were supposed to, not dig ourselves a hole in the first quarter, it wouldn’t have to come down to it.”

East Union was ahead for the entire game, starting with a 17-5 first-quarter lead. The Jaguars cut that to a 28-25 lead at the half and cut East Union’s lead to 46-45 midway through the fourth.

“We’re just working on being consistent as a team, and playing to the level that we’re capable of playing for 32 minutes,” East Union coach Brian Tarr said. “We jumped out to a double-digit lead and let them back into the game. We’ve got to develop that killer instinct.”

Junior Ruben Mann was Kimball’s leading scorer with 11 points and Padhy scored 10 points and was the Jaguars all-tournament selection.

East Union sophomore Gyse Hulsebosch scored a game-high 26 points, and senior Cody Keener scored 11 points and had 12 rebounds. The Lancers also made the most of Kimball’s foul trouble, scoring on 21 of 27 free throws.