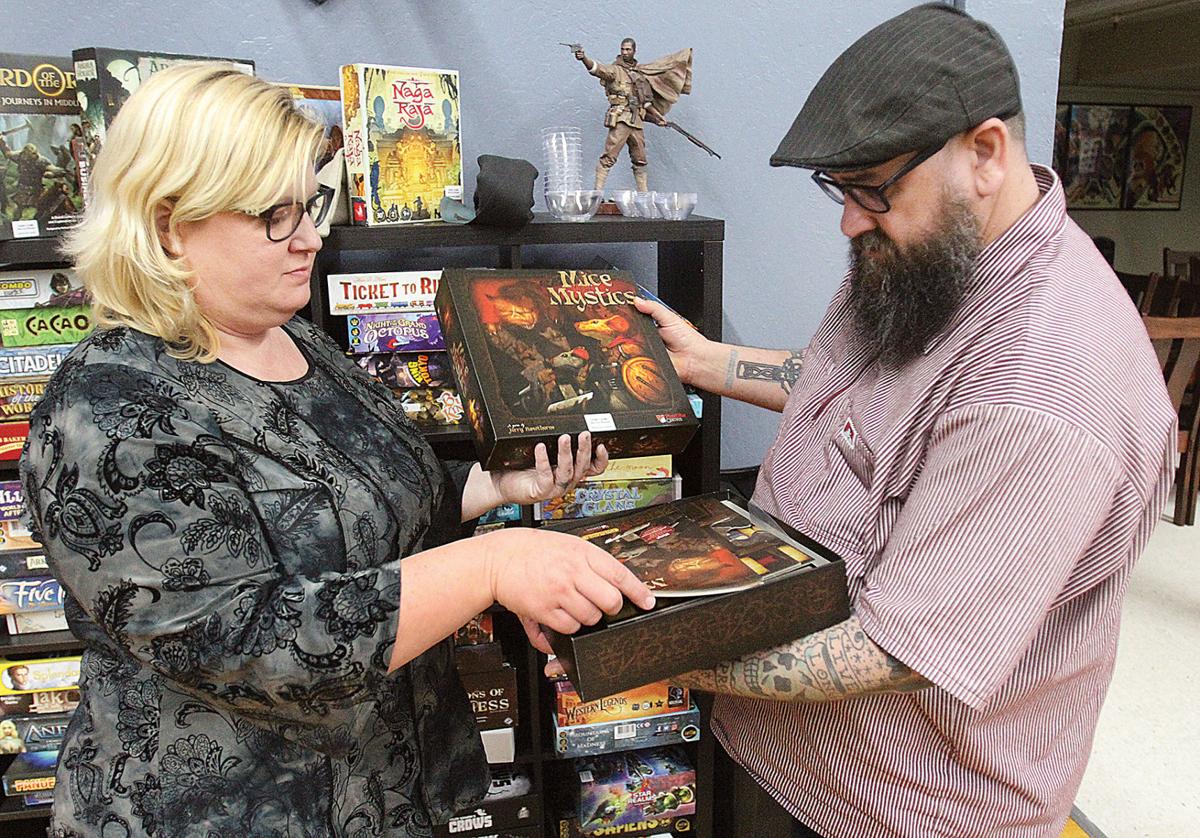 Christine Mabry and Noel Mabry open one of the board games in their library of games for customers to play at their Blackrowan Games shop on Wednesday afternoon. The couple opened the store two months ago and said their first Black Friday and Small Business Saturday sales were a success. 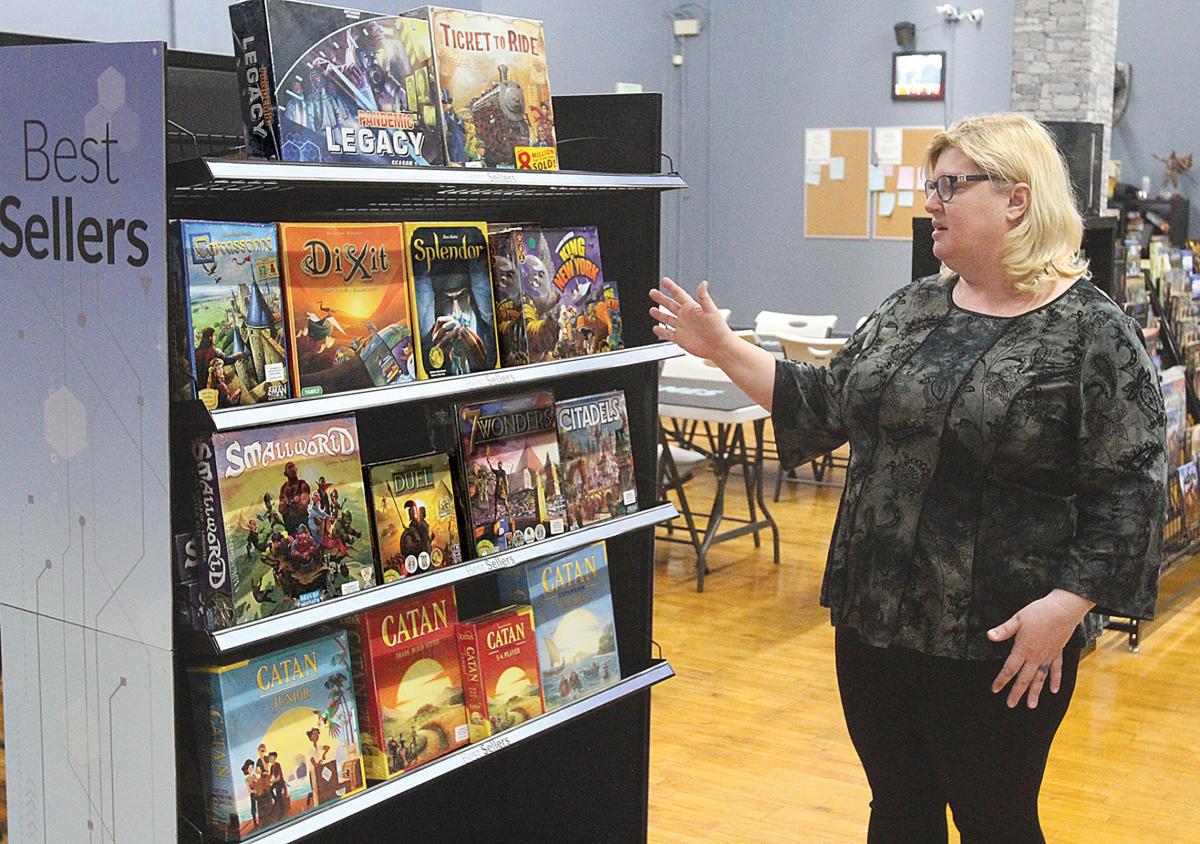 Christine Mabry talks about some of the board games at Blackrowan Games on Wednesday afternoon. 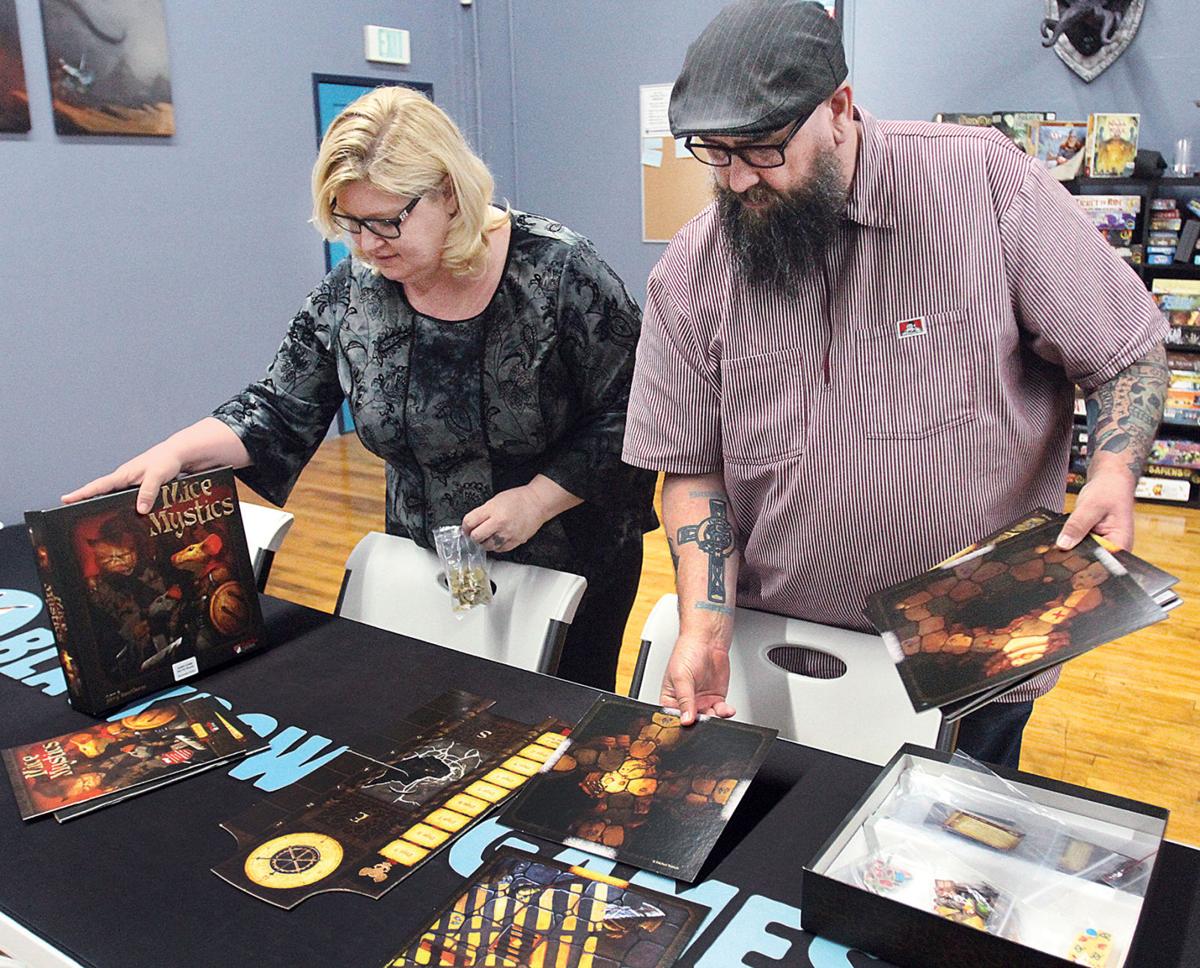 Christine Mabry and Noel Mabry set up a board game from their library at Blackrowan Games on Wednesday afternoon. The couple were pleased with the first Black Friday and Small Business Saturday at their store, which has been open for two months. 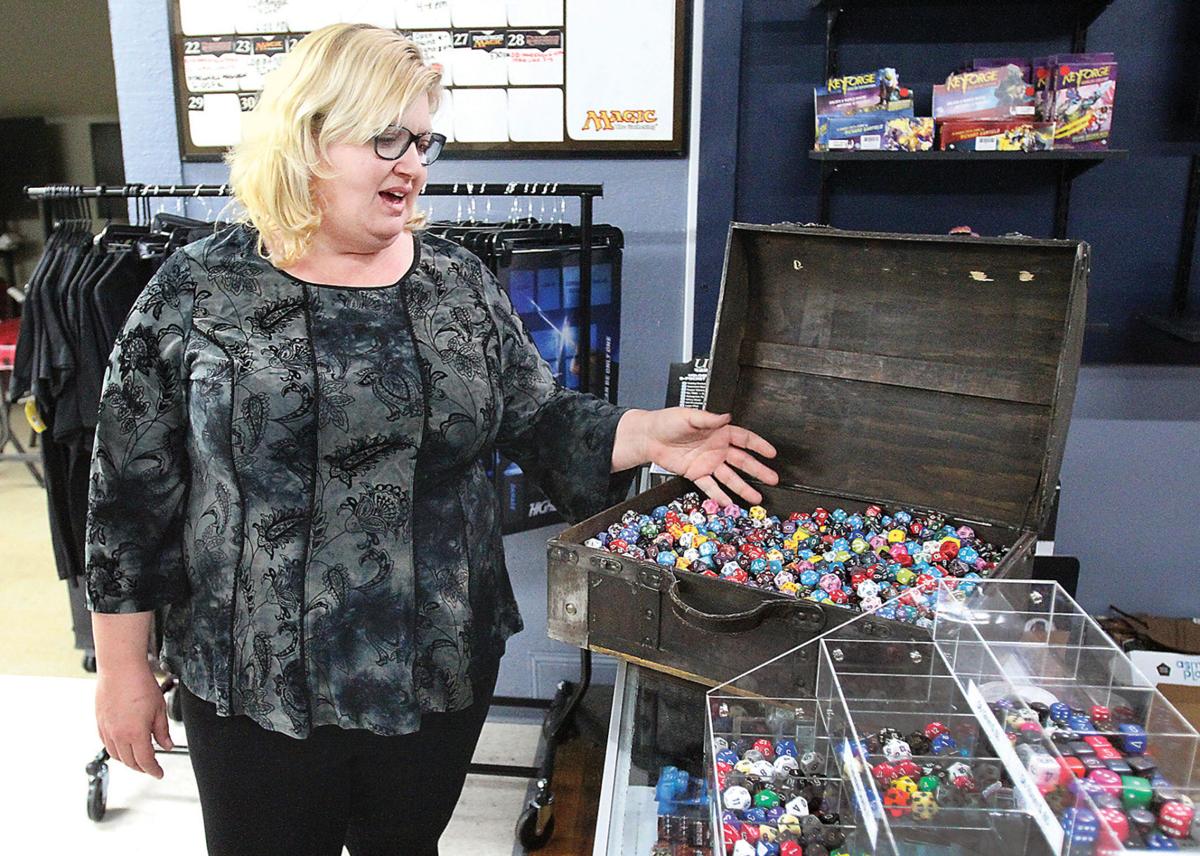 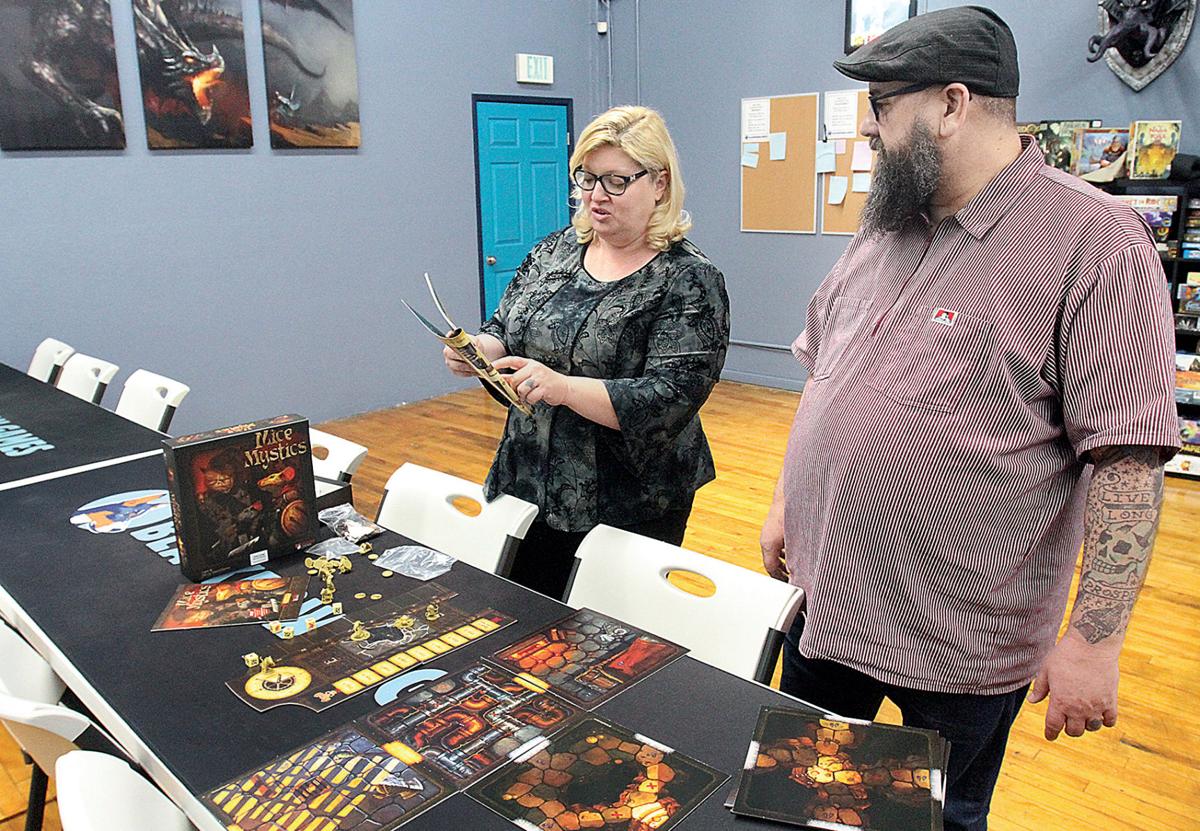 Christine Mabry and Noel Mabry discuss the instructions for a board game from their library at Blackrowan Games on Wednesday afternoon.

Christine Mabry and Noel Mabry open one of the board games in their library of games for customers to play at their Blackrowan Games shop on Wednesday afternoon. The couple opened the store two months ago and said their first Black Friday and Small Business Saturday sales were a success.

Christine Mabry talks about some of the board games at Blackrowan Games on Wednesday afternoon.

Christine Mabry and Noel Mabry set up a board game from their library at Blackrowan Games on Wednesday afternoon. The couple were pleased with the first Black Friday and Small Business Saturday at their store, which has been open for two months.

Christine Mabry and Noel Mabry discuss the instructions for a board game from their library at Blackrowan Games on Wednesday afternoon.

Husband and wife Noel Mabry and Christine Mabry started Blackrowan Games two months ago to create a community where people could play board, card and dice games. But they also hoped for a strong start to the holiday shopping season, and they got it this past weekend.

“The whole weekend, if we count Black Friday through Sunday, was record-breaking for us,” Christine Mabry said. “Previous to that, our biggest day was our grand opening party, but we significantly exceeded that. People were definitely out shopping.”

The Mabrys were among the local Tracy merchants who joined small businesses across the nation in record-breaking sales on the weekend when many people traditionally start their Christmas shopping.

American Express launched Small Business Saturday in 2010 to encourage people to buy from local merchants and independent businesses. According to a report released Monday by American Express and the National Federation of Independent Business, shoppers across the United States spent an all-time record $19.6 billion on Saturday.

To get ready for holiday shoppers, the owners of Blackrowan Games pushed ads on social media focusing on an area 50 miles around Tracy.

“A couple of things were striking to me,” Christine Mabry said. “The week leading up we still had really good sales, and then on Black Friday in particular, because that was the day we chose to market. We had a lot of our regular folks come in and support us, but we saw quite a few new people who didn’t know we were here and came in for the sales.”

The couple said their store at 130 W. 11th St., Ste. A, has generated a loyal following in the two months it has been open.

“I’ve actually had people say, ‘You know, I don’t mind paying a little bit more to pay you,’” Noel Mabry said. “Even the guys that are special-ordering from me, the guys that come in for ‘Warhammer’ and stuff are a lot of special orders and they are consistent every week. They could go online and special-order it, but they like they can come here and get paints, and the special order stuff is not the common stuff — so they say, ‘I could go online and buy it, but I’d just as soon get it from you.’”

“Things have changed over 26 years I’ve been here,” Cefalo said. “The internet didn’t used to be an influence and 26 years ago there weren’t many other options available to people, so Black Friday used to be a big day for us. Over the years, it became somewhat less and we decided it was worth just not even going to war on Black Friday.”

These days, he closes Main Street Music, 45 W. 10th St., on Thanksgiving and the day after and kicks off the holiday shopping season on Saturday.

“For us, it’s almost more of a social day. It’s kind of cool, we see customers and friends we haven’t seen sometimes all year,” Cefalo said. “It’s kind of almost a time when they come in and say, ‘Hello, how are you doing?’ Business is also very good. We do a really good business on Small Business Saturday.”

“Kind of a fun extra discount day. We have some customers that have been looking at something the week before and we’ll tell them it will be 20% off on Small Business Saturday, that kind of thing, so some of them will wait and come in and that kind of adds to the fun,” he said.

He said he had better sales than on a normal Saturday at the music store.

Cefalo doesn’t worry much about competing with big-box stores and online sellers.

“Generally, our prices are at least as good, so that’s not at issue,” he said. “The perception we struggle with a little bit is the perception that ‘Well, I’ll just get it on Amazon and get a better price’ and that’s just not the case. Frequently we’re less expensive.”

At the other end of downtown, Elaines’ Boutique, 31 E. Sixth St., was open for business both Friday and Saturday.

“I think a lot of our repeat customers came to support us,” co-owner Elaine Bogetti said. “They make a point to get in the car and support us on that special day.”

She said the clothing and accessories store has participated in every Small Business Saturday since it opened 8½ years ago.

“The core people that know we’re here and they come down and want to support us on those special days,” she said. “Community support has been huge for us. I don’t believe we would be open if we didn’t have the community support.”

Part of the appeal, she said, is a hands-on shopping experience that can’t be replicated online.

“They want to touch it and see it, and a lot of people try on, or they are shopping in a group of people and they get feedback from the other person when they are buying for a sister or an aunt,” Bogetti said.

The chance to “try before you buy” was also in play at Blackrowan Games and Main Street Music.

Christine Mabry said part of her and her husband’s business model was having an open gaming area and creating a community where people could play games together.

“Already in two months we have a very large number of regular supporters,” she said. “People recognize that’s what they are supporting, not just the family business but a gathering place for the community.”

“A lot of the merchandise that we sell, you really have to come in and play it to know if you like it. That’s a big part of it, people will come in and play a guitar and they are like, ‘I don’t like this one,’ and they play another one, and ‘Oh my gosh, it feels great, I have to have it,’” he said. “You don’t get to say hi and shake someone’s hand when you’re shopping online.”

Mike Sandhu and Jeanette Pombo Marcucci are Tracy’s 2019 Male and Female Citizens of the Year as the Tracy Chamber of Commerce gives its annual Community Recognition Awards.