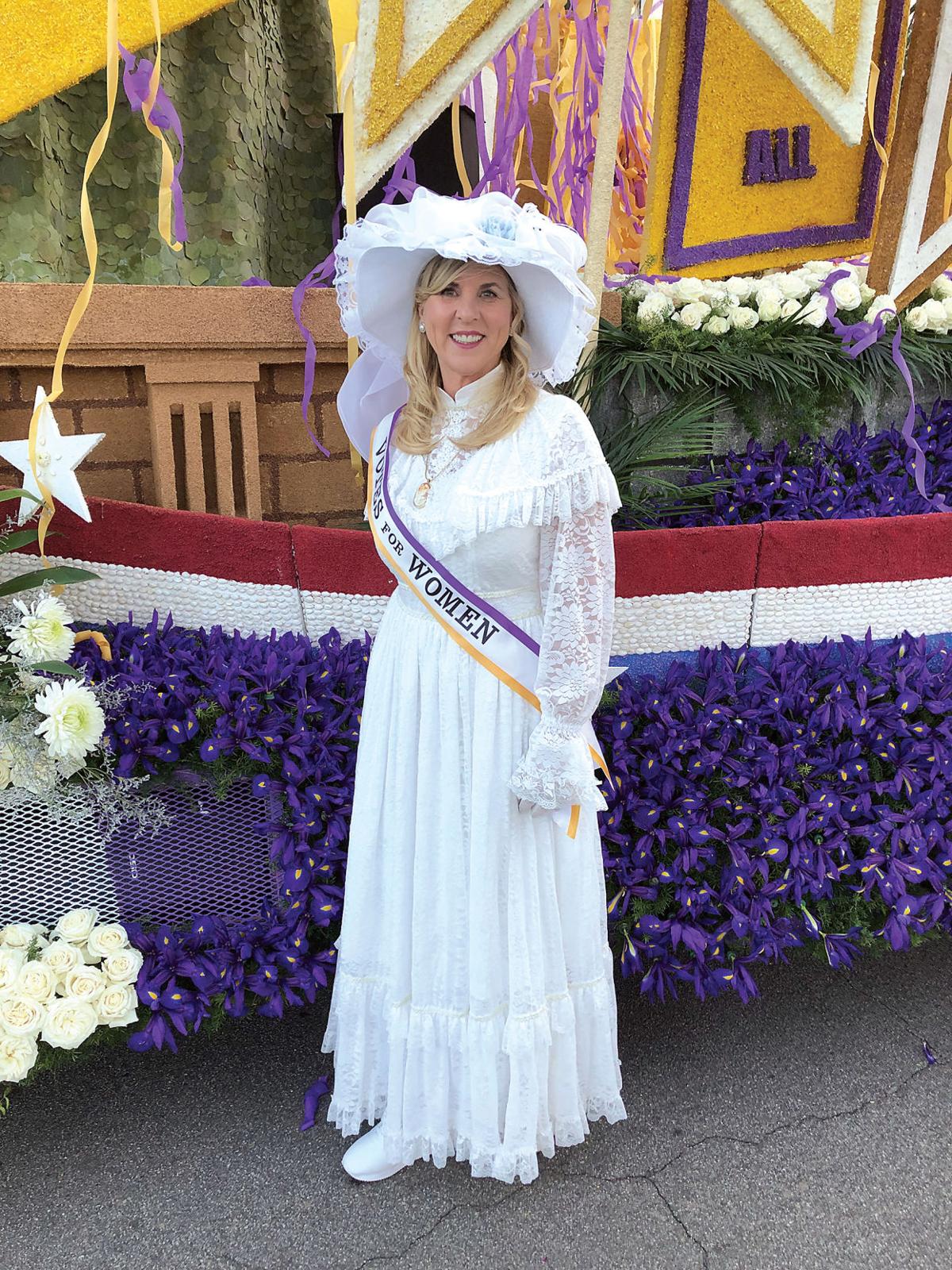 Cindy Thoming Sanders paused during a Rose Parade rest stop along the 5½-mile parade route for her husband, Dwain, to snap a photo of her in the white dress she had created for her participation in the parade. 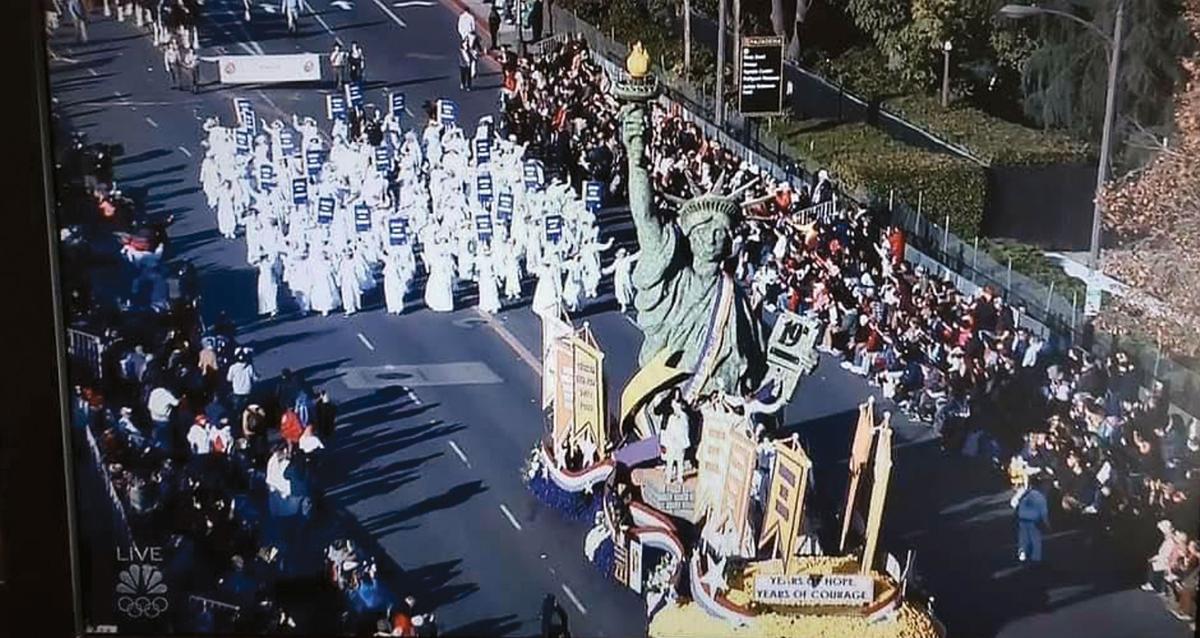 The 100 women accompanying the 19th Amendment Commemorative Float in the Rose Parade on New Year’s Day all wore white dresses of the era leading to the amendment’s ratification by the states. Cindy Thoming Sanders of Tracy was among them.

When Cindy Thoming Sanders reached the corner of Orange Grove Avenue and Colorado Boulevard in the Tournament of Roses New Year’s Day parade in Pasadena, her emotions soared.

The Tracy-area resident was one of 100 women, all clad in white turn-of-the-20th-century dresses, walking beside and behind the float commemorating the 100th anniversary of the passage of the 19th Amendment to the Constitution giving women the right to vote.

“When we made the turn, my heart just stopped,” she reported. “There were wall-to-wall people on both sides of Colorado Boulevard as far as we could see — and TV cameras aimed at us from every angle.”

She said the roar of the crowds, many in bleachers, “was deafening,” and women especially were very emotional at seeing the 19th Amendment centennial anniversary float and accompanying walkers.

“For women, there were cheers and quite a few tears,” Cindy said. “That’s when we fully realized we were carrying the weight of women’s future with us. It was just so exciting — just wonderful.”

Cindy, who is president of the Mount Diablo District of the California Federation of Women’s Clubs, was selected to be one of the 100 women walking in the parade. Her selection in August started weeks of preparation that led to walking 5½ miles in the parade and spending two more hours reaching the starting point and then returning to it.

Her white costume had to match the style of dresses worn by American women between 1895 and 1920. It had to have layers so she would be prepared for any kind of weather.

“Fortunately, we had a clear, beautiful day. We couldn’t have asked for better weather,” Cindy said.

New Year’s Day started early, at 1:30 o’clock in the morning, when the marchers arose in their hotel and then gathered at a rendezvous hotel in Burbank to board buses to the parade starting point in Pasadena.

“When the Air Force stealth bomber flew overhead, that was the signal to begin walking at 8 a.m.,” Cindy said. “Once we started, we had to keep moving. It wasn’t a stroll. We walked at a pretty good clip.”

There were, however, two rest pauses along the 5½-mile parade route. At the second, Cindy’s husband, Dwain Sanders, was there to greet her and snap a photo of her in her white dress standing next to the float.

Did all 100 of the 19th Amendment walkers make it to the finish?

“Yes, we all made it,” Cindy reported. “There were marchers of all ages. One group included a grandmother, daughter and granddaughter.”

The women in the group of walkers represented women’s organizations from all parts of the U.S., and there were descendants of women’s suffrage leaders involved in the successful campaign to pass the 19th Amendment.

After returning home, Cindy is completing plans to speak before women’s and community groups to provide a personal account of her long, exciting day in Pasadena and what the 19th Amendment has meant for American women.

“Many people don’t realize the 19th Amendment, besides guaranteeing the right of women to vote, also includes the rights to inherit and own property, have custody of children, and keep the money we earned,” she said.

Her first appearance will be at the monthly meeting of the Tracy Woman’s Club the first Friday of February at the Elks Lodge. Cindy is a past president of the club.

“I’ll be able to tell them of what it was like to be part of women’s history,” she said. “It was an experience of a lifetime.”