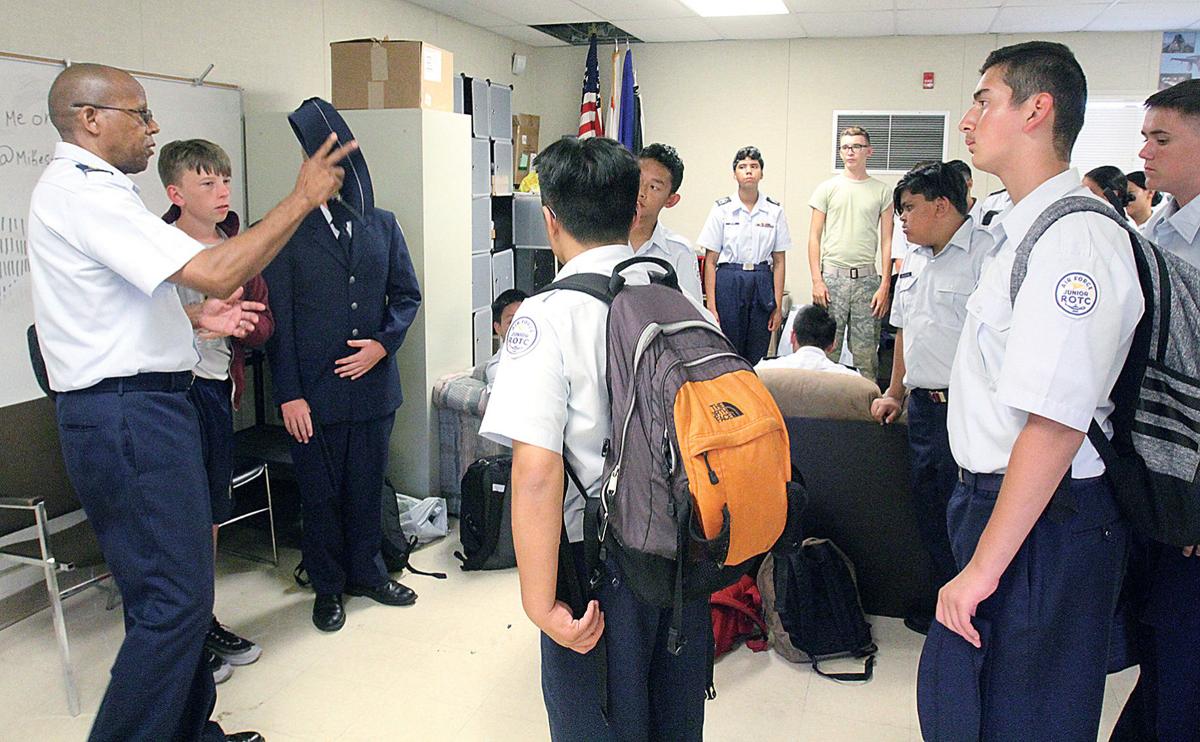 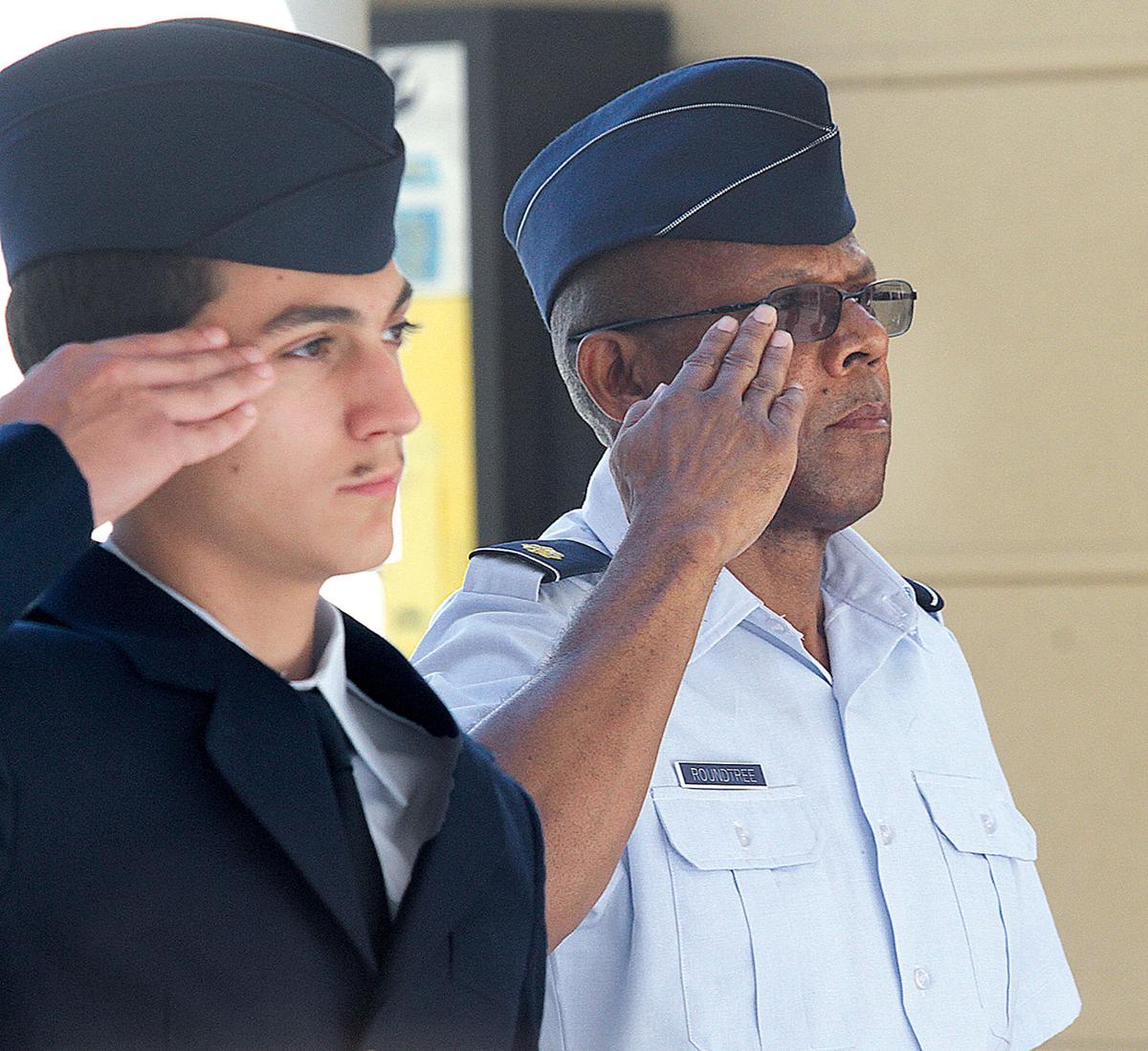 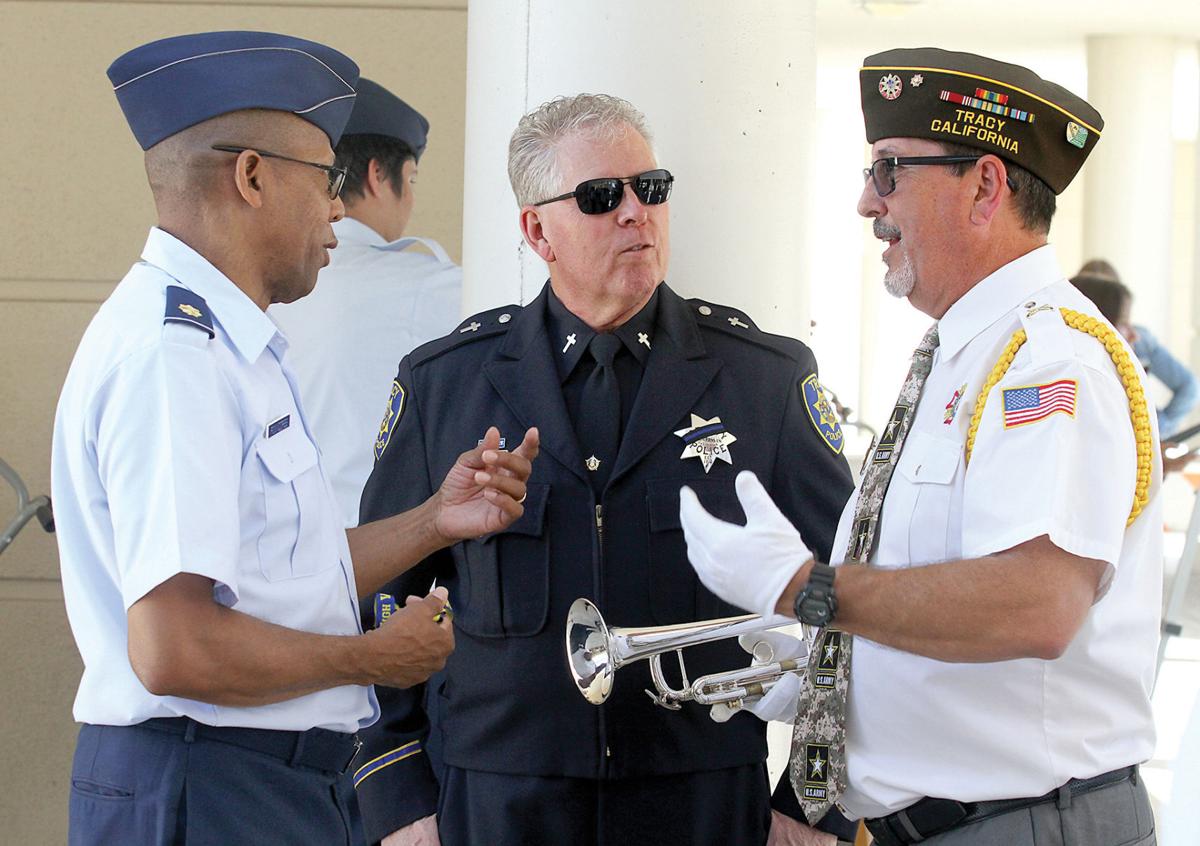 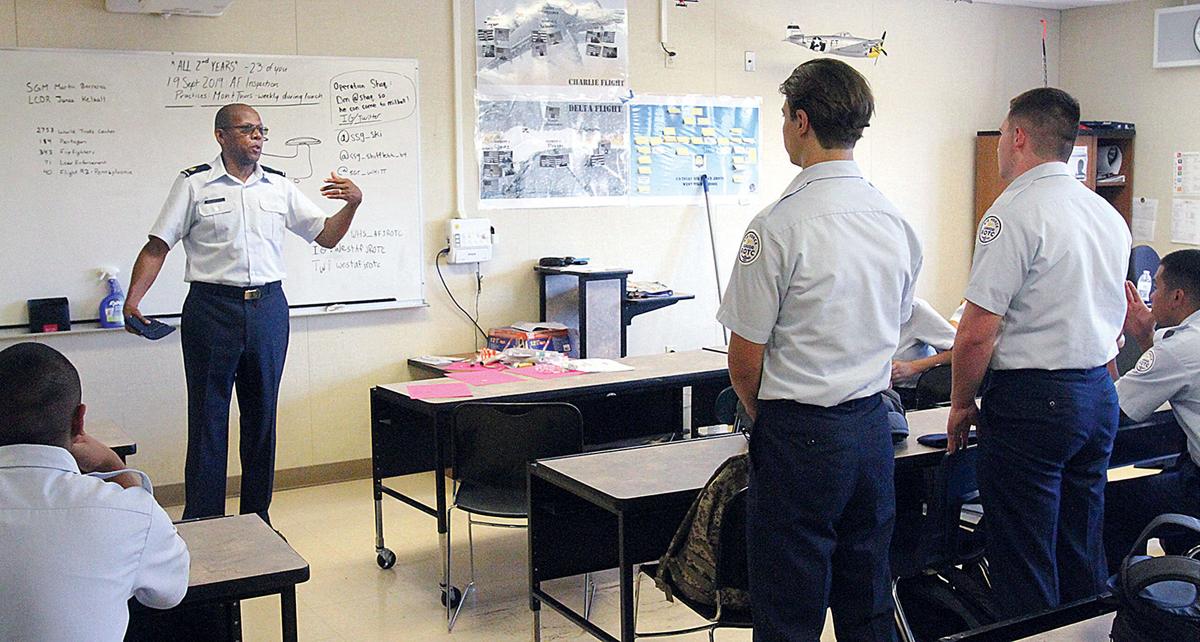 The 107 cadets performed a special retreat ceremony remembering the victims of the Sept. 11 terrorist attacks 18 years ago.

A special flag retreat ceremony honored the memory of the victims of the Sept. 11 terror attacks and the sacrifices made that day.

“I am extremely proud of the cadets,” said Roundtree, who had been on campus only four days. “The ceremony that we witnessed today, that ceremony was set up by the cadets. And once again, we facilitate, we model, we guide, we motivate, but we let the cadets set up the events. This was their event they established so they can understand the significance and the importance of it.”

For the first time in the four-year history of the West High JROTC program, it is fully staffed with an officer and a noncommissioned officer. Roundtree joins retired Air Force Senior Master Sgt. John Morris, who started at the beginning of the 2018-19 school year.

Principal Zach Boswell hired Roundtree in February but had to wait until this month to bring him on board.

“This makes us completely compliant with what the federal government requirements are to sustain an ROTC program,” Boswell said. “They give us a little bit leeway the first couple of years to get the program running, but at certain point, they want to see you have multiple instructors, you have a certain percentage of students in the program.”

He said the program has grown every year.

“We’re pumped, we’re super excited to have Roundtree and Morris together,” he said. “It’s going to be really good for our program. He stepped in and immediately made a big impact on the students, so we’re excited.”

Roundtree, 62, wasn’t in the ROTC or JROTC himself. He joined up after graduating from the State University of New York at New Paltz with a bachelor’s degree in political science. He also has an MBA from National University in San Diego.

After jobs in contract administration at bases around the United States and Korea, his last assignment in the Air Force was at University of California, Los Angeles as an assistant aerospace science instructor teaching ROTC cadets preparing for active duty.

“That’s what introduced me into teaching, and just from working at UCLA for those three or four years made me realize it’s something I loved to do,” he said.

He joined the JROTC instructor program as soon as he retired from the Air Force and spent 15 years teaching in Air Force programs in Chicago, Apple Valley and L.A., as well as a few years teaching special education.

He returned to the JROTC ranks at West High last week.

“The program is fantastic. I can see the cadets and the program get a tremendous amount of support from the district, a tremendous amount of support from the principal and the administration, and the students are heavily involved in the community and it shows,” Roundtree said. “And it’s fantastic, the cadet count went from 79 last year and it jumped up to what it is at this point at 107 cadets. That’s a tremendous jump in one year. That’s something to be really proud of.”

His plans include forming an exhibition drill team.

“We’re going to be working some weekends and a lot of time after school on our technique. We would like to enter some national drill competitions,” he said. “I want to prepare to get cadets to compete and win and bring back some trophies for the school.”

Roundtree wants to keep the cadets engaged with the community through parades, volunteering and working with veterans. He also plans to visit middle schools to show the younger students what JROTC cadets do, from presenting the colors to drill presentation.

“So when the kids think about high school, the first thing they think about is ROTC, because they have seen the uniforms so much and they see the kids in uniforms and say, ‘Oh, I want to do that,’” he said.

With a full staff, Roundtree said the West High program can add new events, including an overnight trip for to Travis Air Force Base in Fairfield. There, the cadets will get a briefing from the base commander, pilots and other Air Force personnel.

“The whole purpose is what they call curriculum in action: They get to apply what they are learning in a base environment where they are surrounded by all military, active-duty personnel, for two days,” he said.

He stressed that the goal of JROTC is to “build better, more productive citizens” by teaching leadership and responsibility.

“We work with students in all aspects of life — not only within the ROTC curriculum, but we have programs where we tutor and help students with the math classes or the English classes or the science classes to make sure they are successful in life, whatever they do,” Roundtree said, emphasizing that cadets are encouraged to take ownership of their education. “I’m not running the program, I’m here to facilitate the program and teach the cadets to be leaders.”

JROTC @ West High inspires me. These young people and their instructors have only a notion of how much spirit and patriotism they bring out in the rest of us with their dedication and drive to become the best--ever!