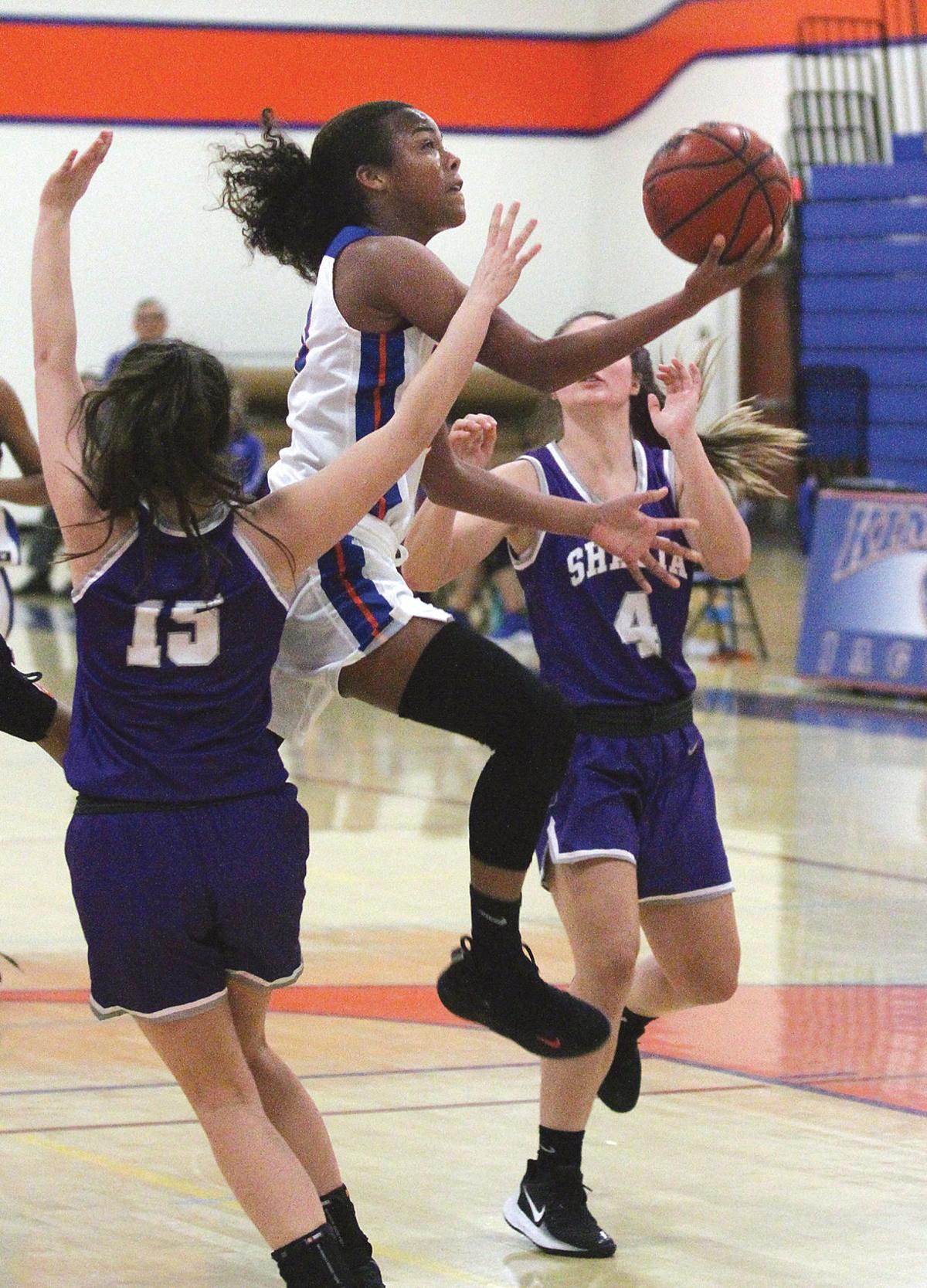 Kimball High sophomore Giana Riley (center) drives between a pair of Shasta High players on the way to the basket Wednesday night at Kimball High. 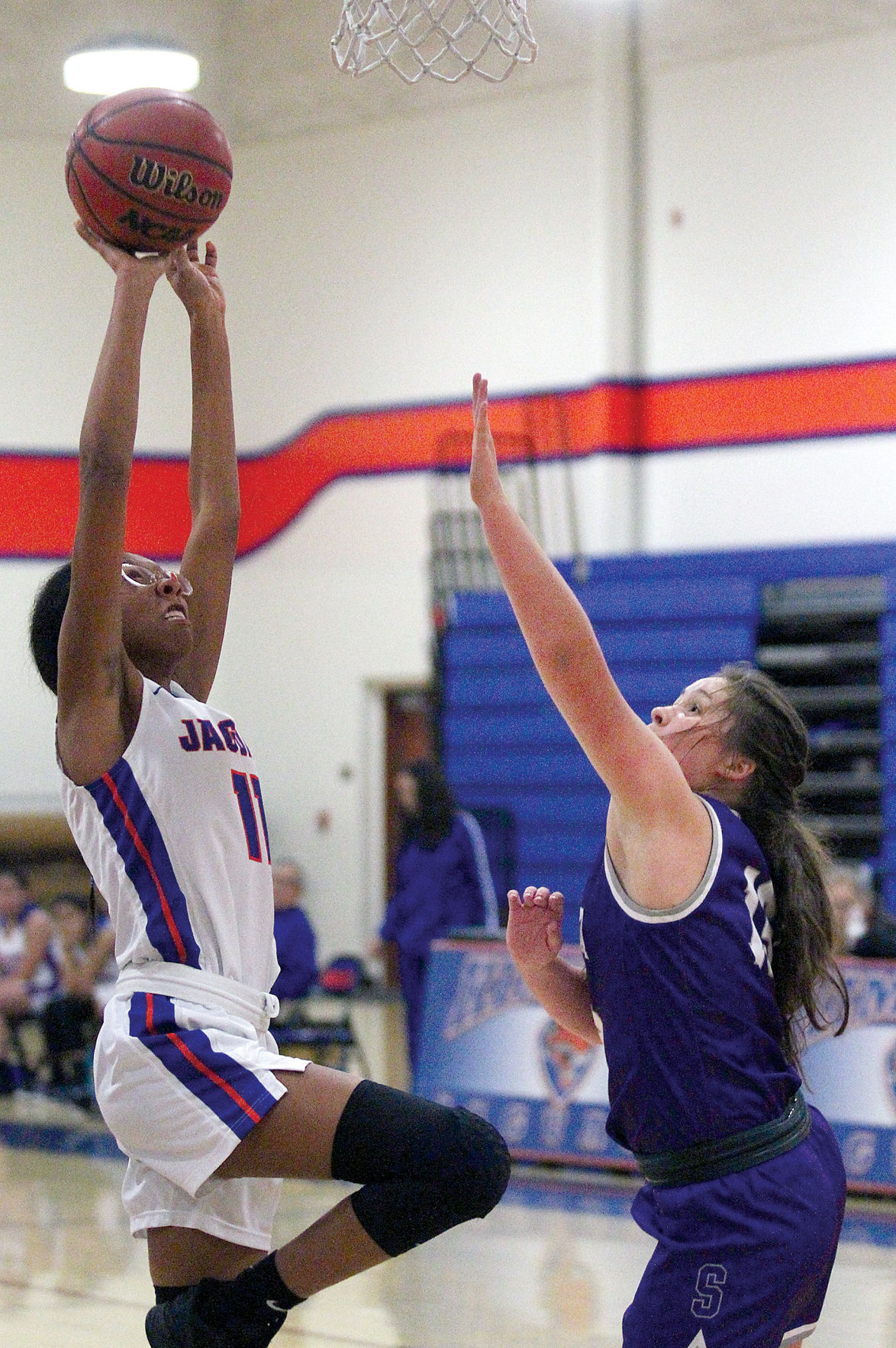 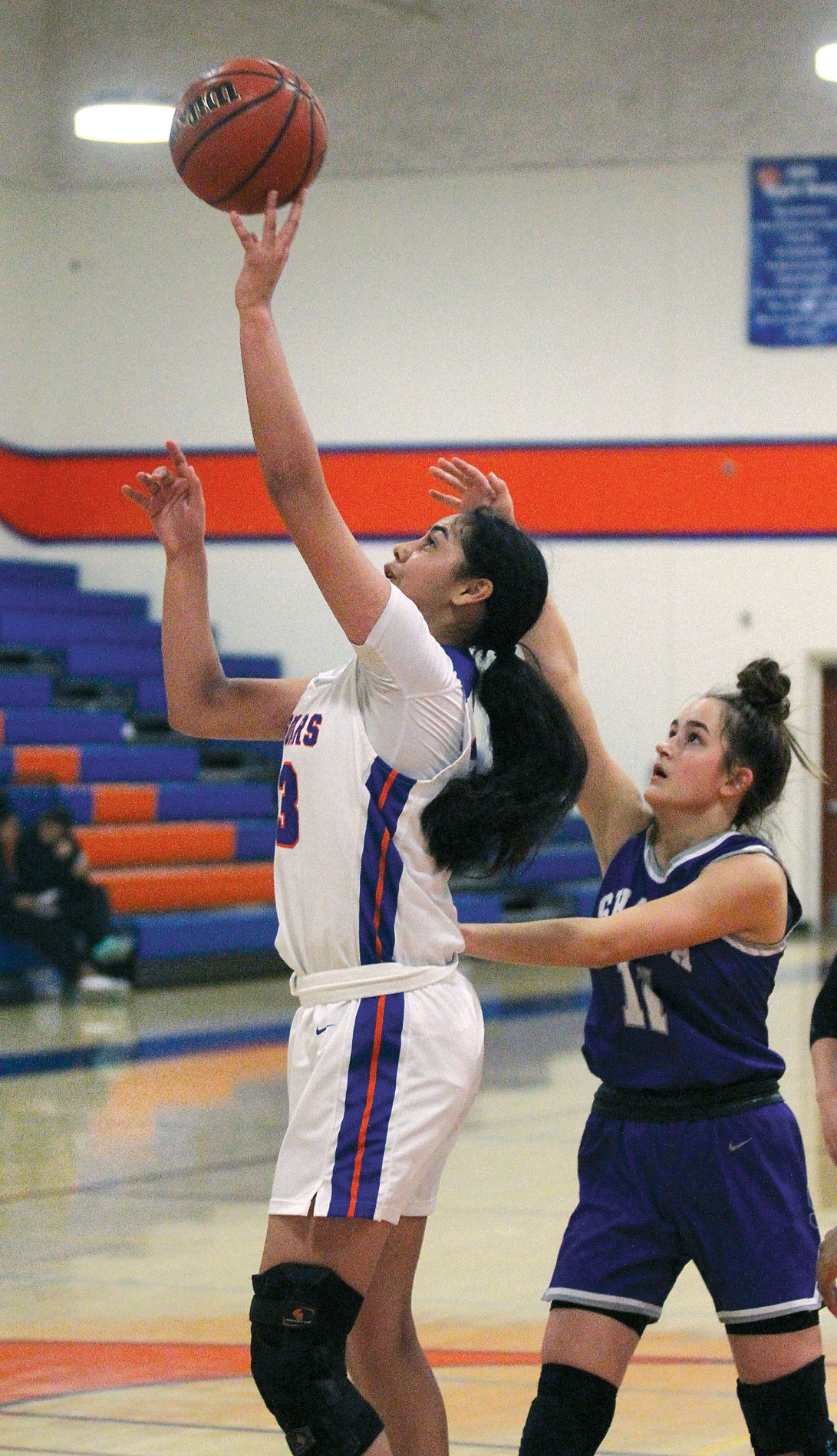 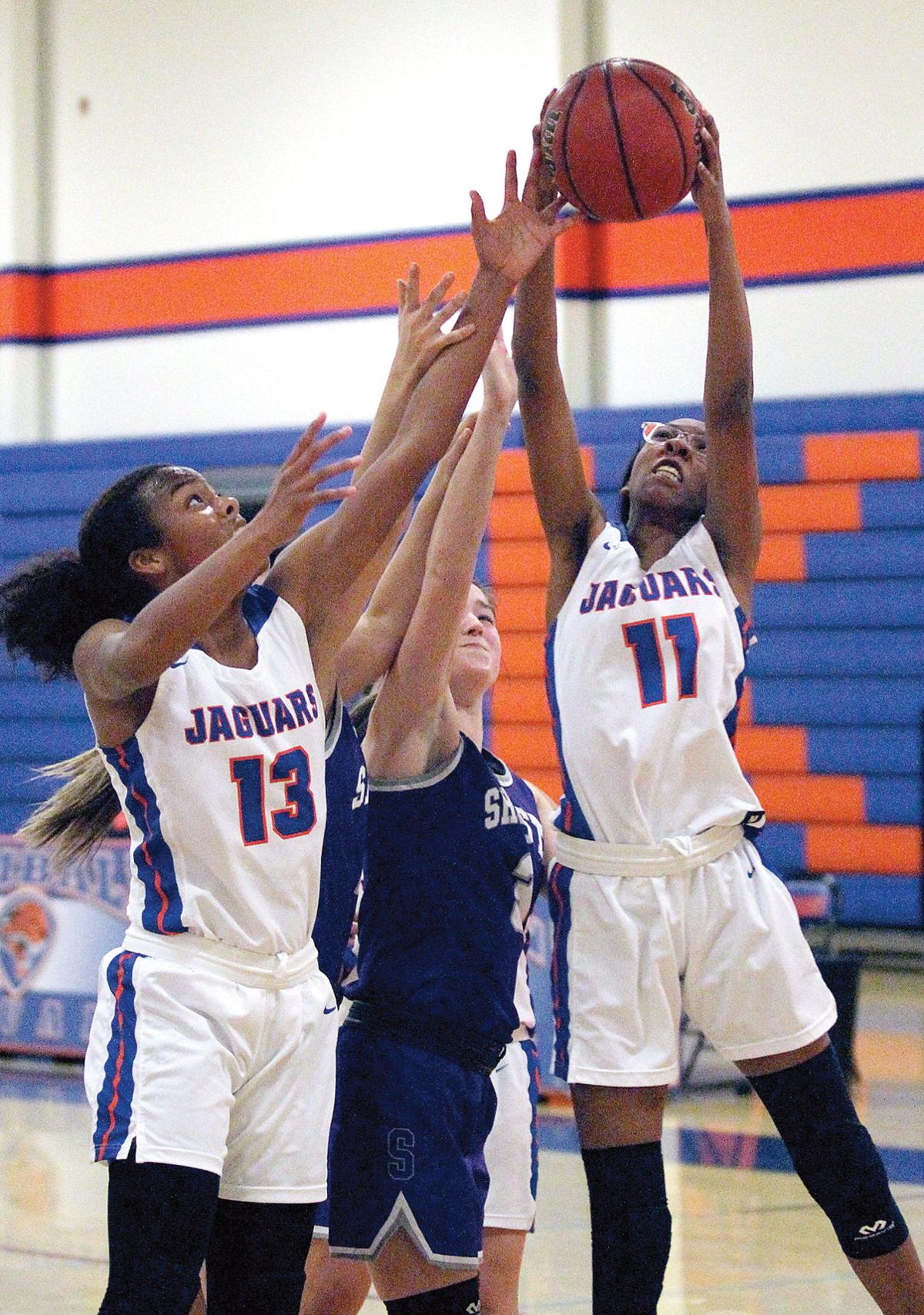 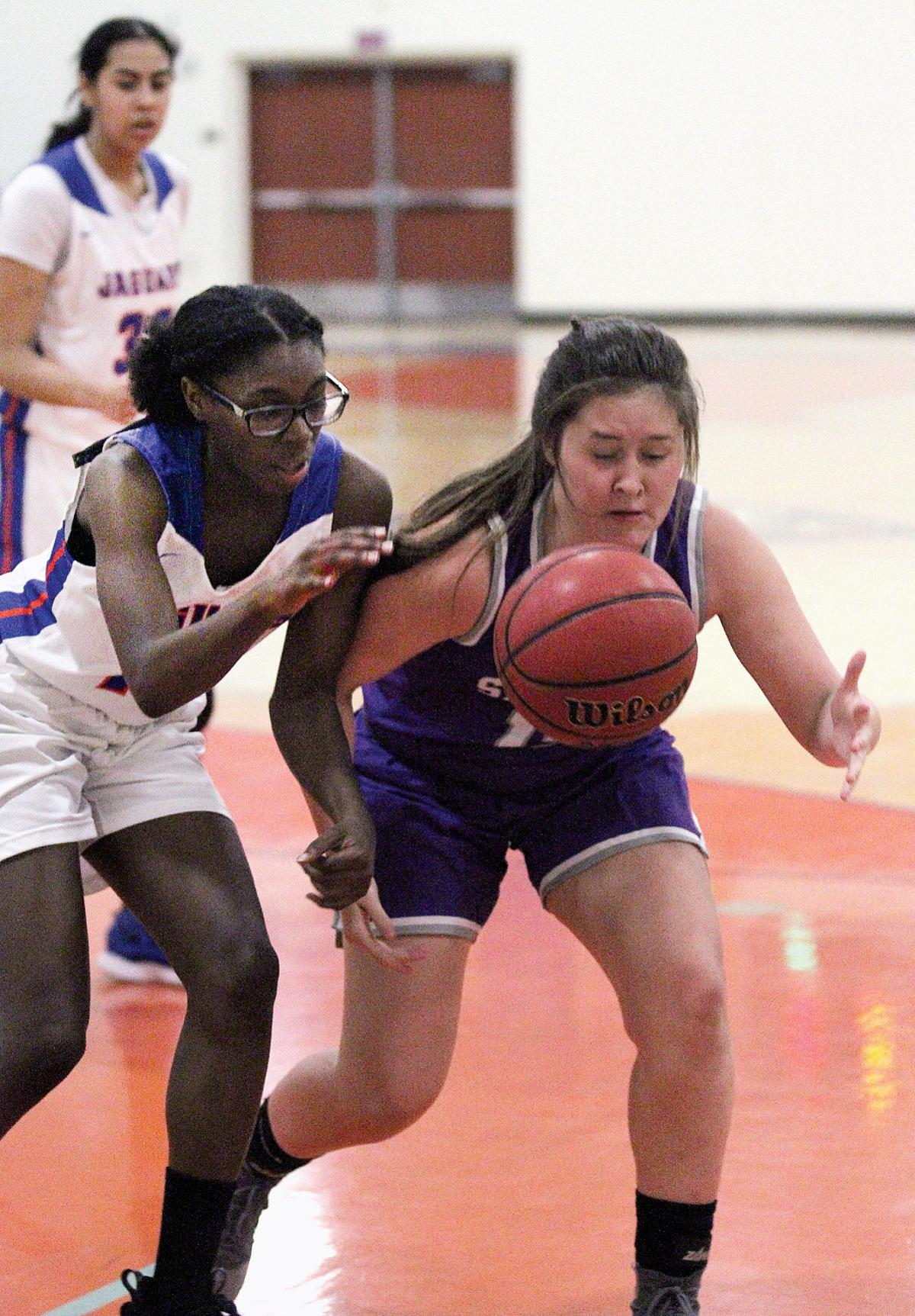 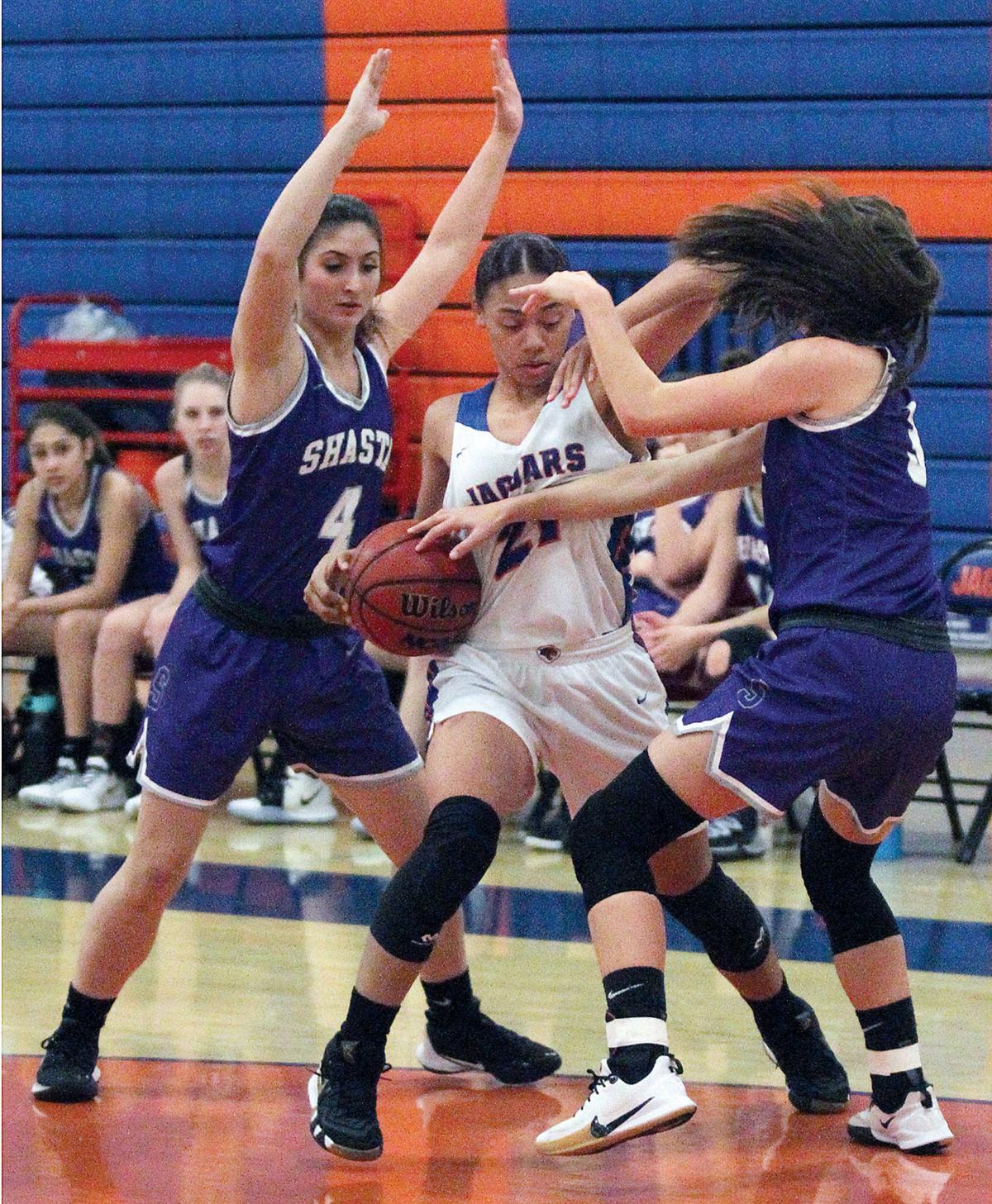 Kimball High freshman Cayia Sims (center) fights to keep the ball as she is pressured by a pair of Shasta High players Wednesday night at Kimball High. 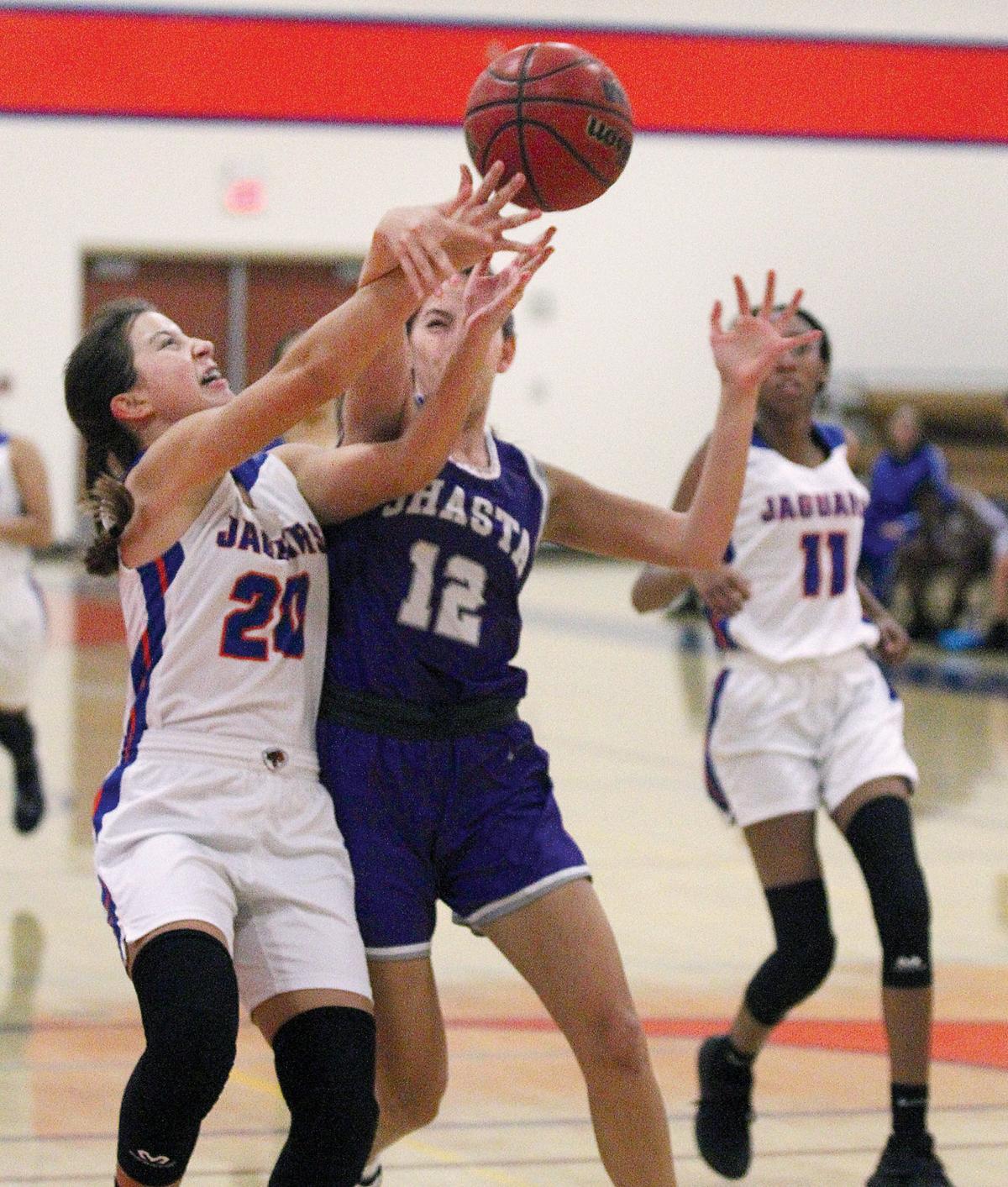 Kimball High freshman Marianthe Tsirelas (left) is fouled on her way to the basket Wednesday night at Kimball High.

Kimball High sophomore Giana Riley (center) drives between a pair of Shasta High players on the way to the basket Wednesday night at Kimball High.

Kimball High freshman Cayia Sims (center) fights to keep the ball as she is pressured by a pair of Shasta High players Wednesday night at Kimball High.

Kimball High freshman Marianthe Tsirelas (left) is fouled on her way to the basket Wednesday night at Kimball High.

Through Saturday, the Kimball High Athletic Complex and Sports Center will host teams from around the San Joaquin Valley and beyond.

The Jaguars opened their Girls Christmas Basketball Tournament on Wednesday, starting with a 50-40 win over Shasta High School of Redding.

From the very start, the Jaguars dominated the board and forced the Shasta Wolves to keep turning over the ball. Kimball’s defense held Shasta to one field goal in the first quarter, and at the half, the Jaguars were ahead 23-7.

“When we come into our games, we expect a lot from every team we play,” sophomore Giana Riley said. “We expect them to come at us hard and press us really good. We just have to come in prepared for that. Play good defense and move the ball well.”

Senior Dariana Willis, who had seven rebounds, two steals, two assists and a block, said that her team’s mindset was to start out as strong as possible.

“I always expect a lot out of every team, because I believe every team wants to win,” she said. “I feel like our communication worked well. That’s our main thing that we lack. We got a little tired but I think we did well.”

The Wolves started hitting their shots in the third quarter and chipped away at Kimball’s lead, but they couldn’t get closer than 10 points.

“They got back the second half. We weren’t running our offense” Kimball coach Mike Granillo said. “It’s something that we have a few kids who have to get acclimated with what we’re doing. It’s just a matter of time. That’s what these tournaments are for, to prepare for the season.”

Willis, now in her third year on the varsity team, said playing four days in a row in the tournament was a good test.

“We’re very grateful to have this Kimball event each year every year,” she said. “We want to win all of the games and we expect to work hard and stay as a team.

West and Mountain House are also playing in the tournament. The Mountain House Mustangs beat Venture Academy of Stockton 54-16 on Wednesday. The Mustangs dominated the first half to take a 28-11 lead and controlled both ends of the court through the second half.

West High took a 52-33 loss to Liberty High on Wednesday.

The Manteca Buffaloes came out strong Tuesday and took a 29-18 halftime lead. Manteca continued to extend its lead in the third quarter, but Tracy picked up the pace in the fourth, still finishing with the 62-45 loss.

The Falcons logged a 46-40 win at Holt Academy in Stockton on Tuesday. Freshman Giovanna Chukwuma led the way for the Falcons with 16 points, and sophomore Maliyah Hutchinson was close behind with 15 points.

The Mustangs and Johansen Vikings played an even first quarter before the Mountain House girls outscored Johansen in the second quarter to take a 29-20 lead. Johansen picked up the pace in the fourth quarter but could not close in at the end, and the Mustangs won 44-39.

Junior Danielle Corell scored 10 points as Tracy fell to Oak Ridge High 66-24 in the first game. Tracy lost to Inderkum 69-26 on Friday as senior Julia Pudiquet led the team in scoring with 7 points. On Saturday, the Bulldogs lost to Kennedy High 52-26, and Sacramento was Tracy’s leading scorer with 9 points.