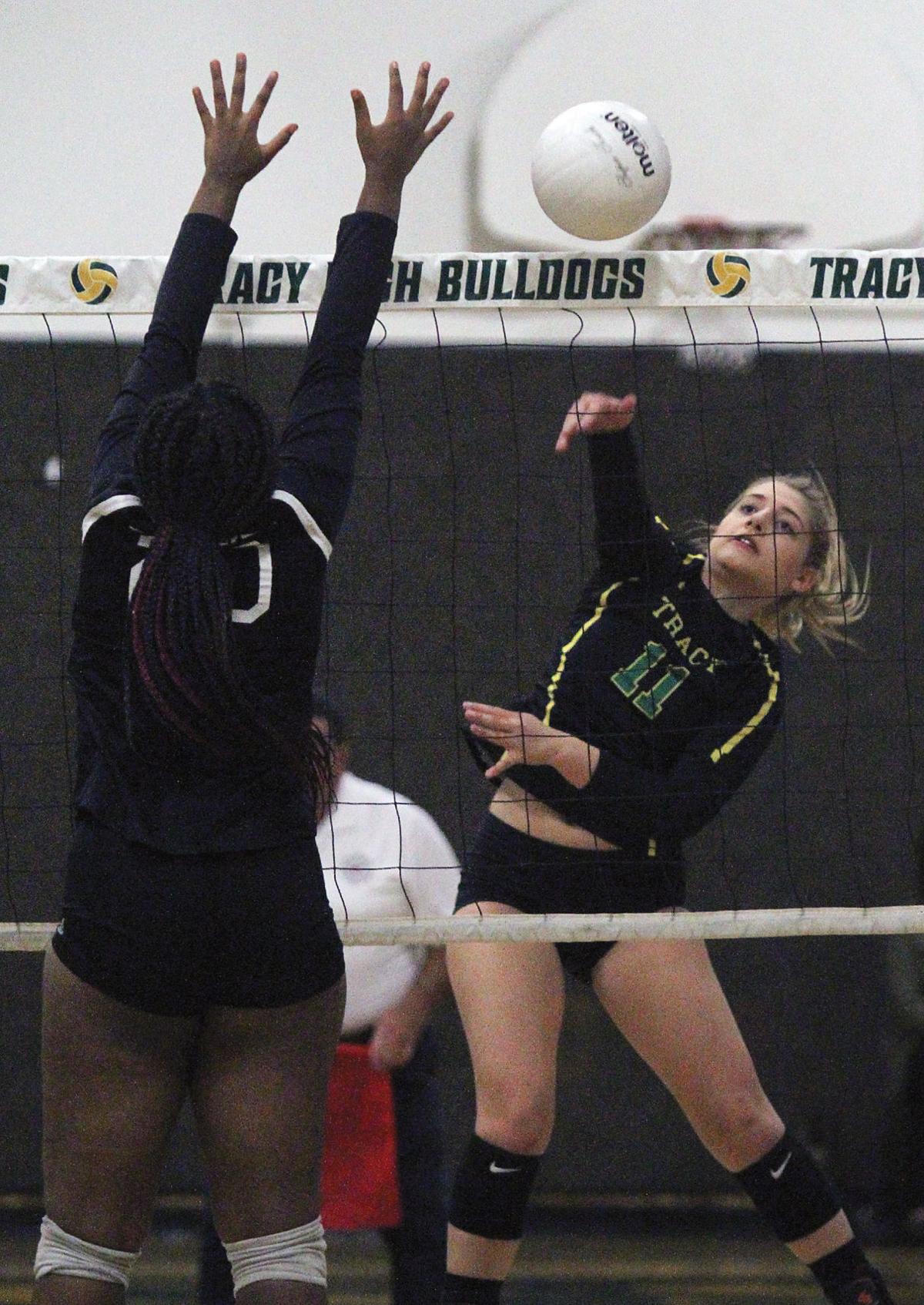 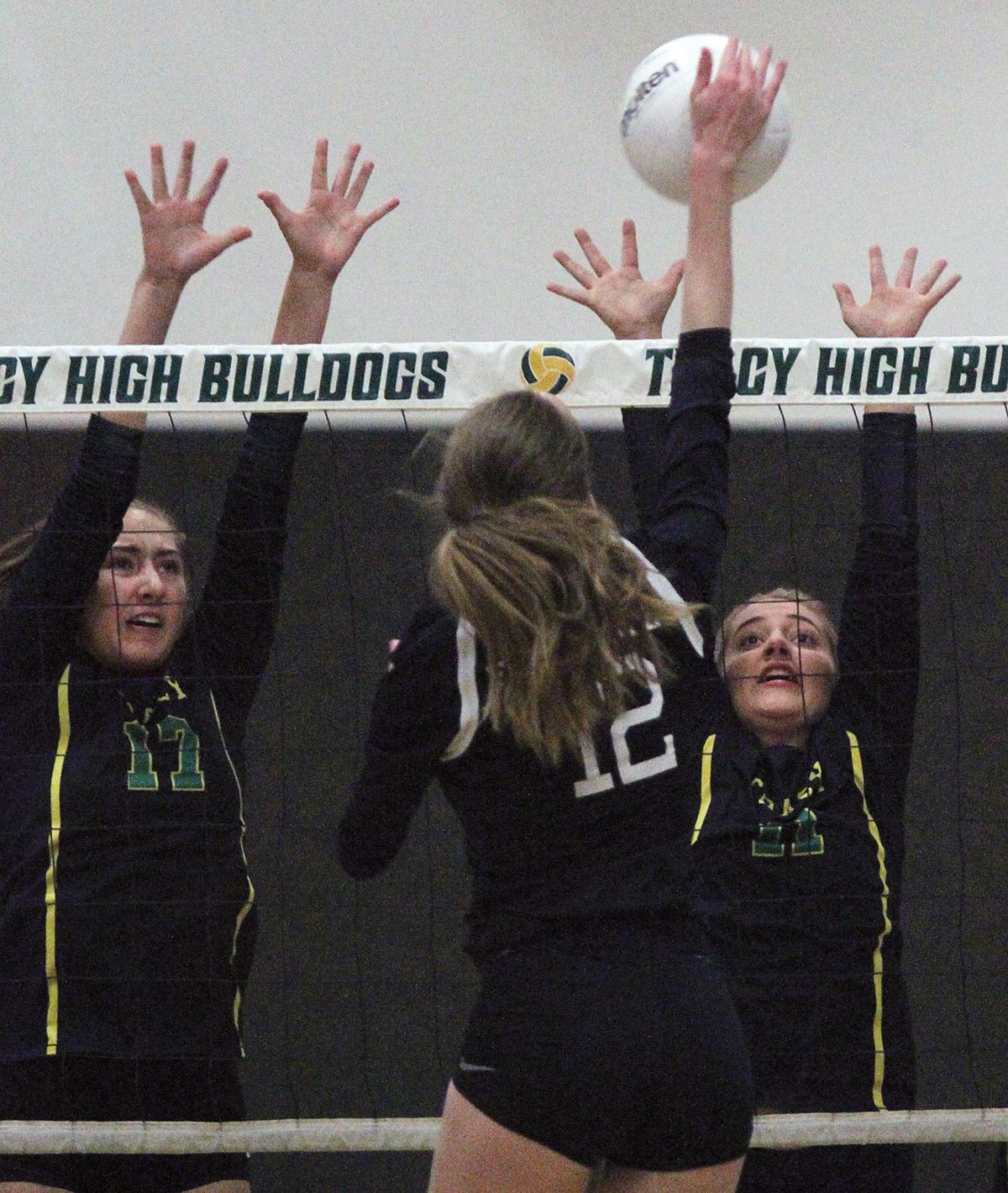 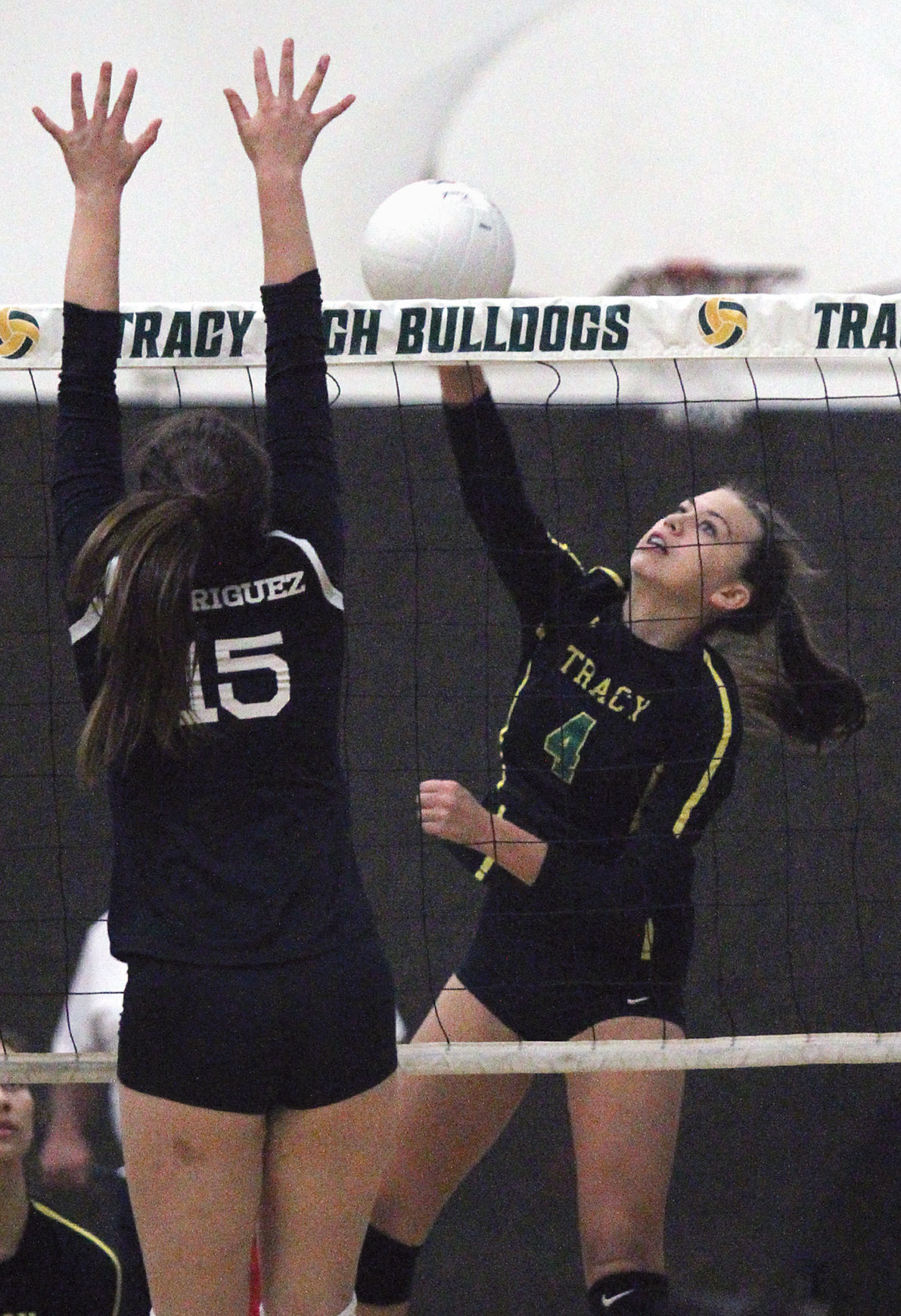 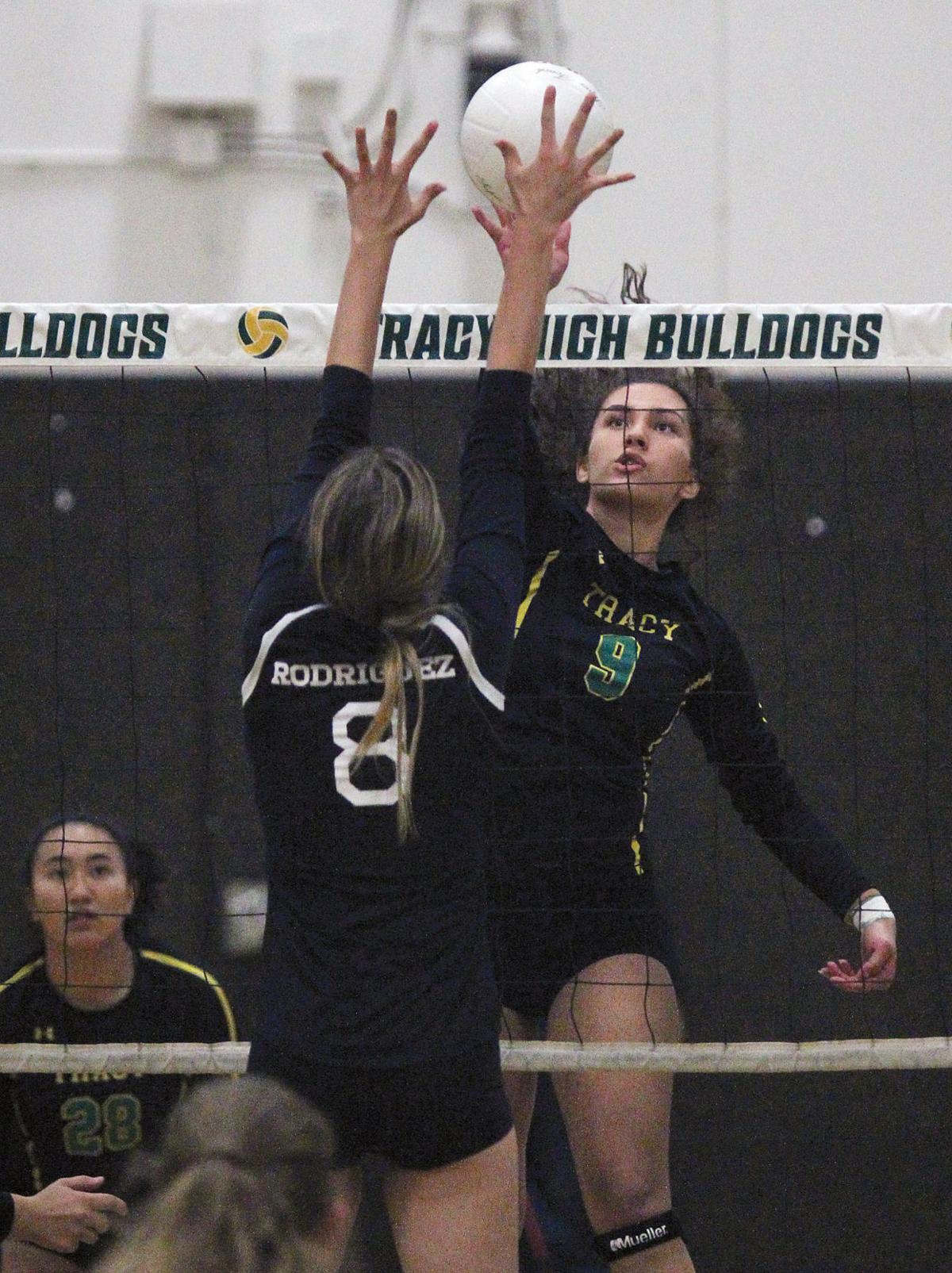 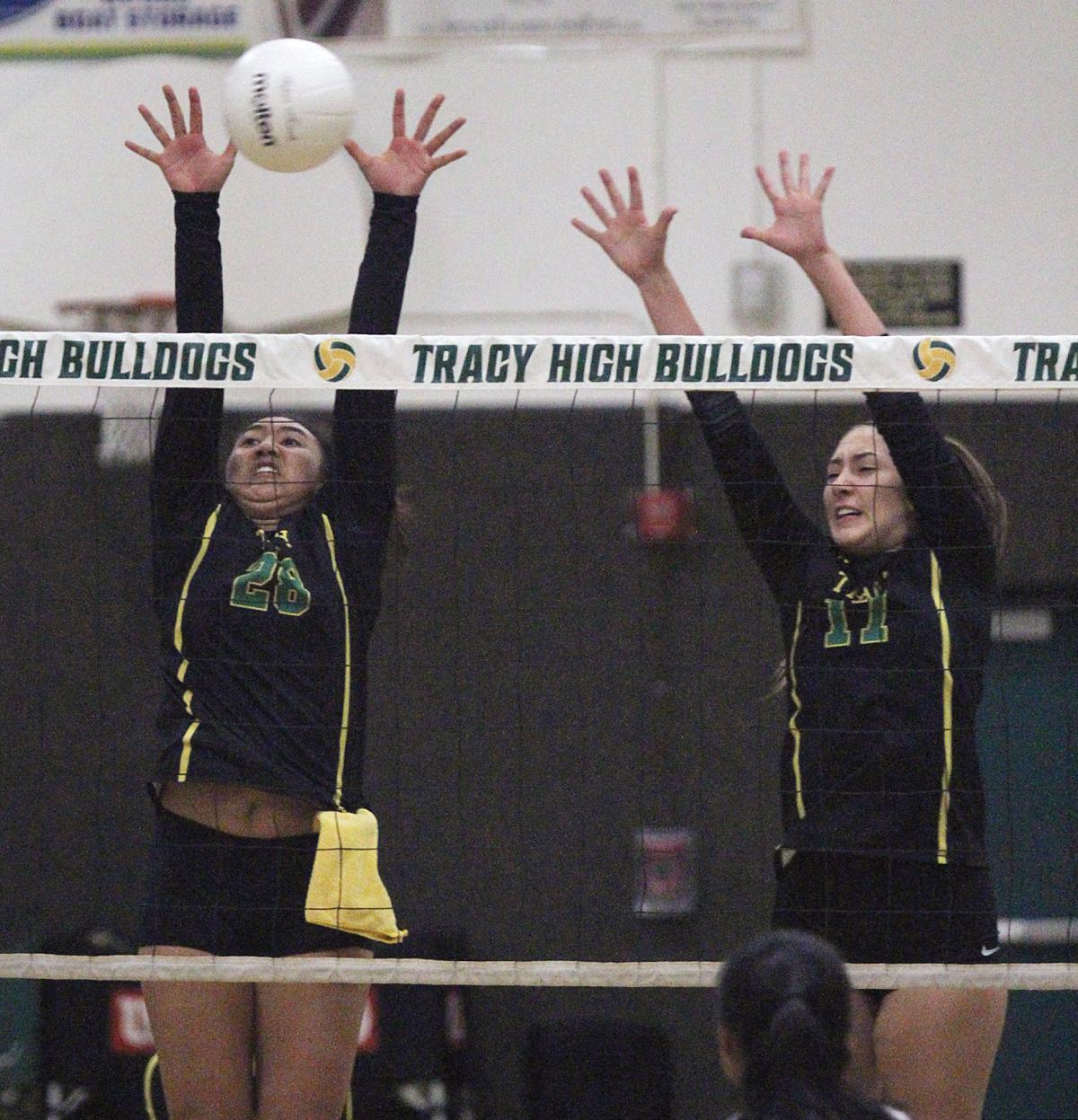 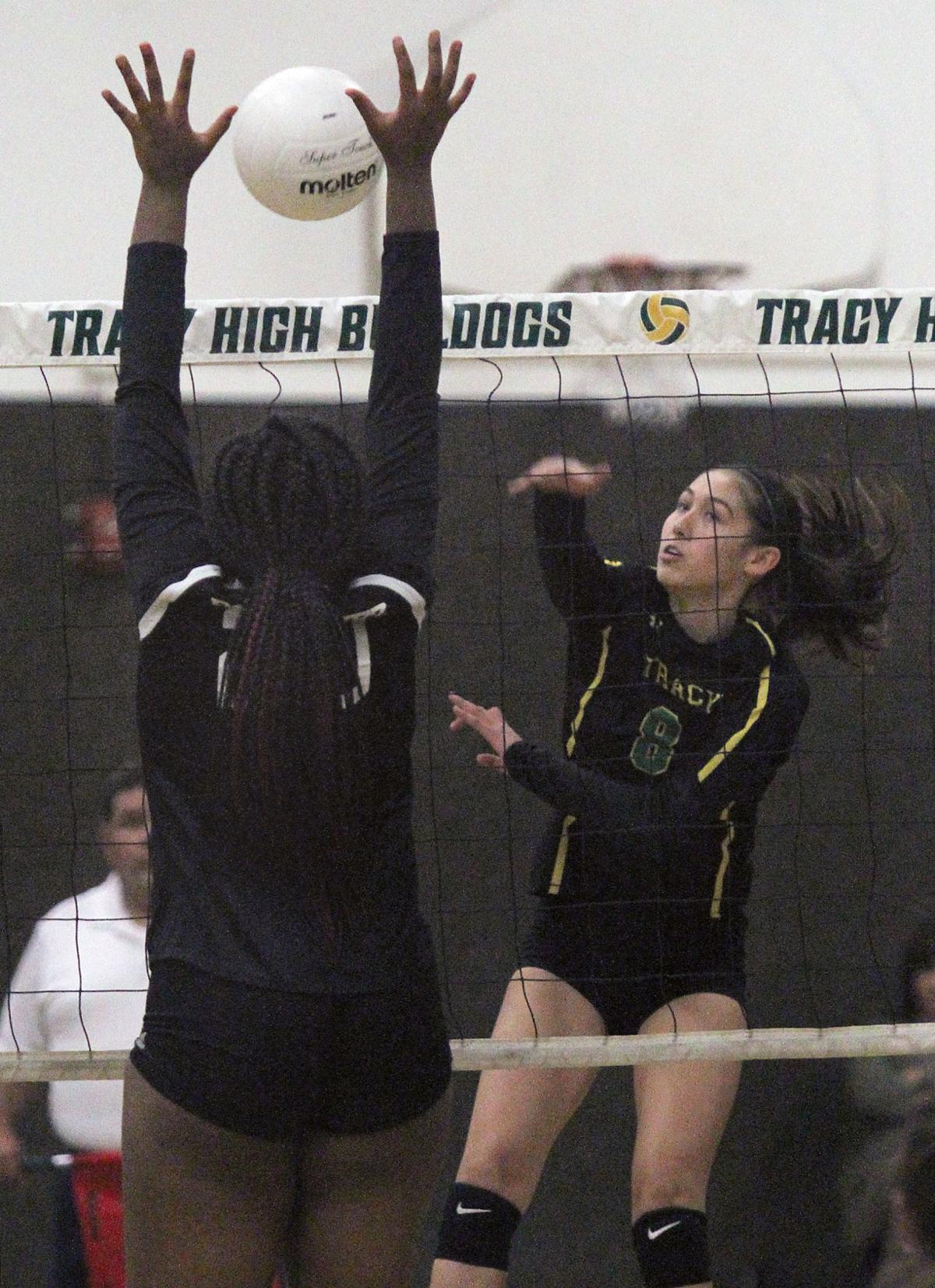 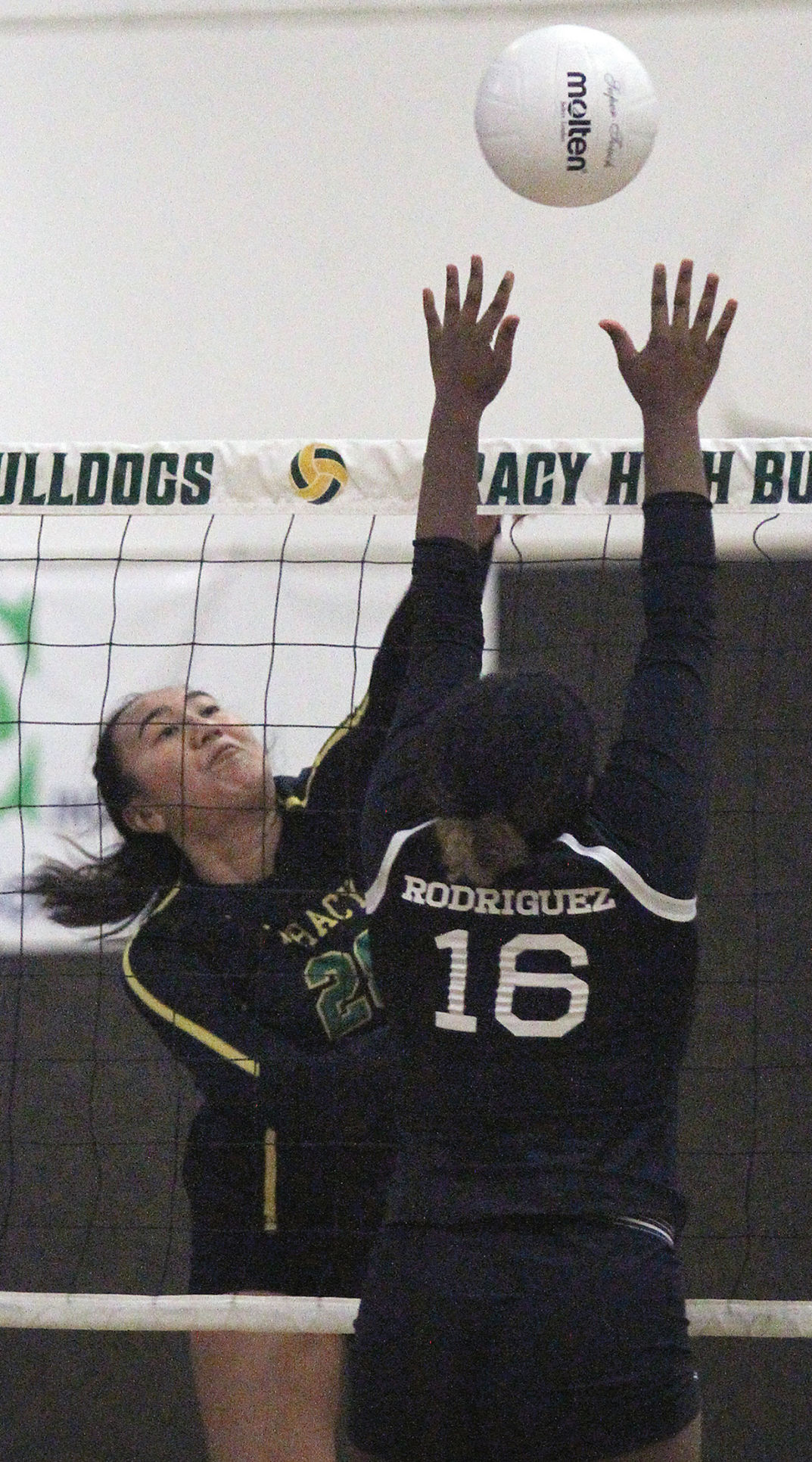 Tracy High senior Leila Sardinha (left) hits the ball past an attempted block in a playoff match against Rodriguez High on Tuesday at Bill Swenson Gymnasium. 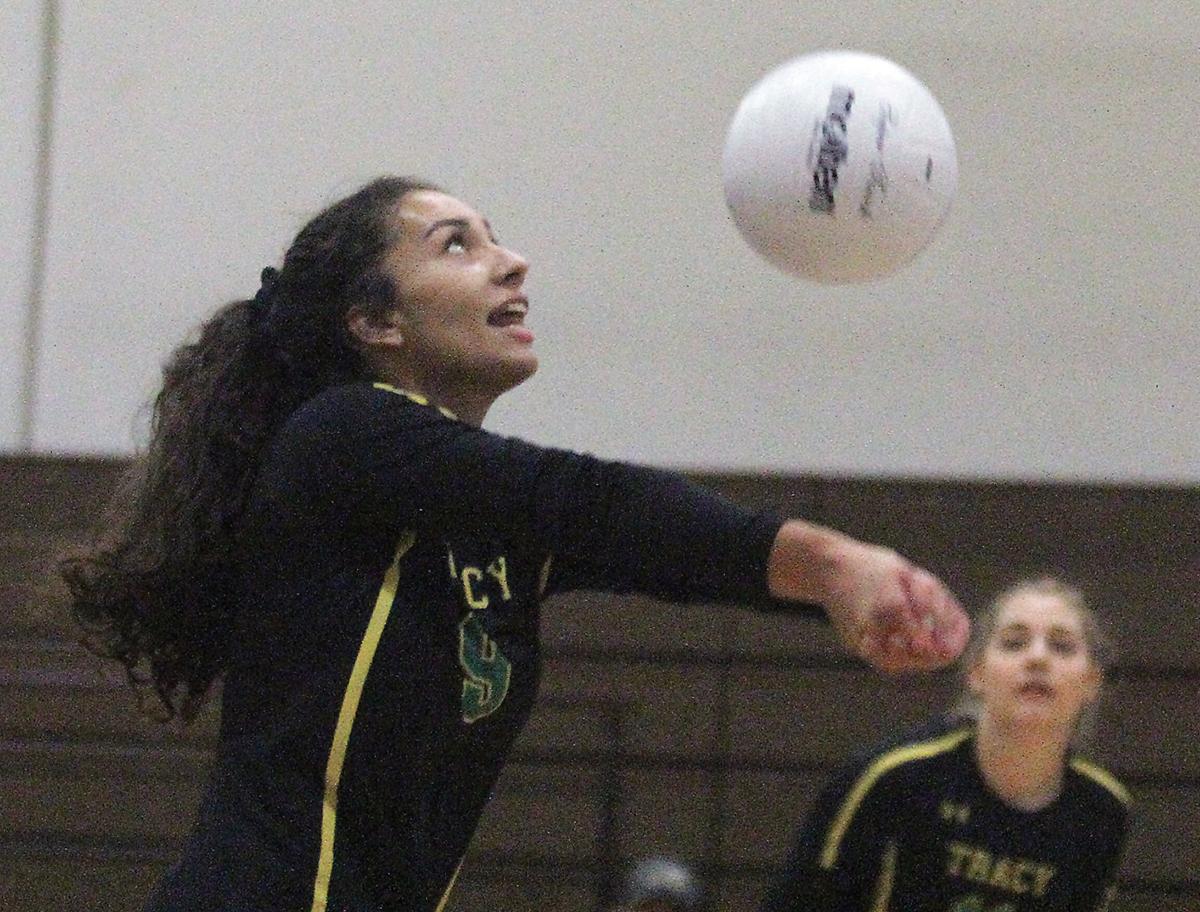 Tracy High senior Leila Sardinha (left) hits the ball past an attempted block in a playoff match against Rodriguez High on Tuesday at Bill Swenson Gymnasium.

The Tracy High volleyball team cruised past the first round of the Sac-Joaquin Section playoffs with a 3-0 win against Rodriguez High of Vallejo on Tuesday.

Tracy (24-8, 7-3 Tri-City Athletic League) entered the playoffs as the No. 1 seed in SJS Division 2, so the Bulldogs will have the home court advantage through next week’s semifinals.

“We’re all healthy and we have a bench now. It’s nice to have all of our starters back,” said Tracy coach Cat Ebojo-Vaughns.

Senior Briahna Garcia, who was out for most of the season because of an injury, returned for two TCAL matches and was a powerful presence at the net and at the service line in the Bulldogs’ first playoff match.

“You can’t replace Briahna’s talent and leadership on the court. She’s a captain. She’s a four-year varsity player. That adds value to every game we play,” Ebojo-Vaughns said. “It was nice to see them be in a rhythm tonight and aggressive. They’re playing like they want it. It was really refreshing to see.”

Garcia said that Tuesday’s win would help build her team’s enthusiasm for the rest of the playoffs, which will continue Thursday when the Bulldogs host Buhach Colony of Atwater, the No. 8 seed in the Division 2 bracket. The winner of that match will most likely gain entry into the California Interscholastic Federation state tournament.

“We did great as a team and our energy was there. We showed up. We want to be sensational in playoffs,” Garcia said. “I want to keep our energy up as we go through. We just want to take it all the way and show everyone that we can take No. 1.”

Tracy held the lead the entire way through the first set, pulling ahead early with junior Ariel Reynolds at the service line and with shots from junior Natalie Laiolo, who was the Bulldogs’ attacking leader with 11 kills, plus 16 assists. Tracy went up 17-5 with Garcia at the service line and an attack by senior Leila Sardinha before Rodriguez began to match Tracy’s rhythm.

Sardinha started off the second set with a series of service points, but the Rodriguez team was able to match Tracy’s pace until the Bulldogs executed effective attacks, including kill shots by freshman Jianna Palmer and senior Teia Magaoay. Garcia slammed a couple of shots past the Rodriguez defenders, and Laiolo led from the service line for another string of points at the end.

Sardinha finished the night as another of the Bulldogs’ leading attackers with 10 kills, and she had four blocks. Freshman Chloe Lemons also had 10 kills. In her first year in the playoffs, Lemons said she’s ready to make the most of her freshman season, and Tuesday was a good indicator of how the team will do in the championship tournaments.

“I felt that our team was just bringing the will to win. All of us came out with the intensity and the mindset of just making the win and keep pushing,” she said. “My team definitely helped me by encouraging me, like when I shanked a couple of passes, they brought me back up and encouraged me to make the kill.”

The Kimball Jaguars (26-6, 9-3 Valley Oak League) moved past their first-round opponent in the SJS Division 3 playoffs with a 3-0 win at Lathrop High (23-5, 14-0 Western Athletic Conference) on Tuesday.

The Jaguars, who are the No. 9 seed in SJS Division 3, will travel to Grass Valley on Thursday to face No. 1 seed Nevada Union in the quarterfinals.

The Mountain House Mustangs and Liberty Ranch Hawks played a hotly contested match all the way through an extended fifth set Monday in Galt in the play-in match of the SJS Division 3 bracket.

The outcome ended the Mustangs’ season with the team going 15-10 overall and 10-4 in the Western Athletic Conference, good enough for third place in the league.