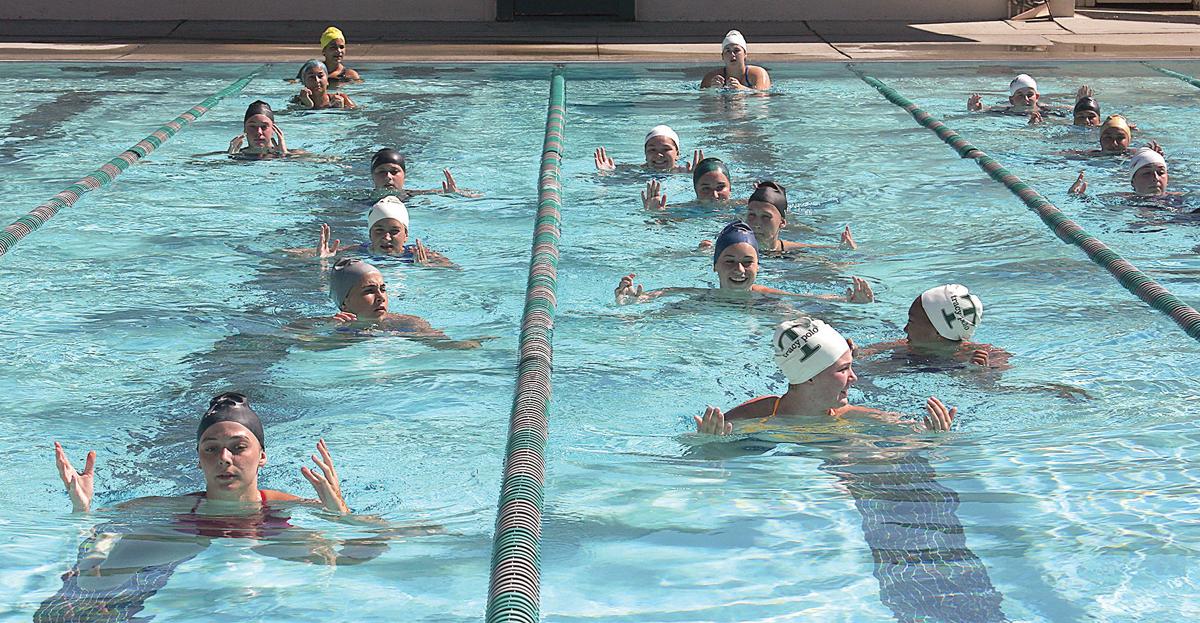 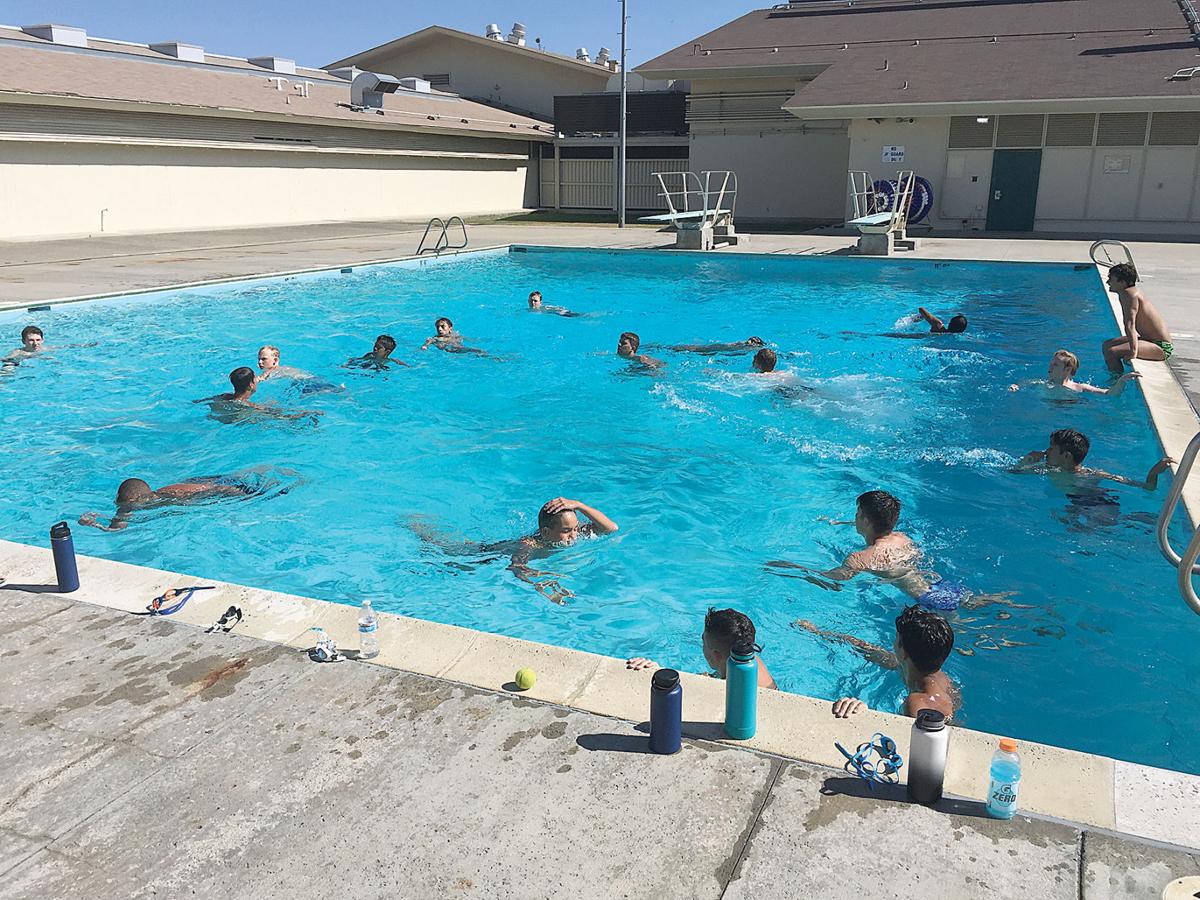 The diving pool at Tracy High has long been the venue for Bulldog water polo games, but the Tracy High teams will play their home matches at West High this year now that the Tri-City Athletic League requires all games to be played in regulation-size pools. 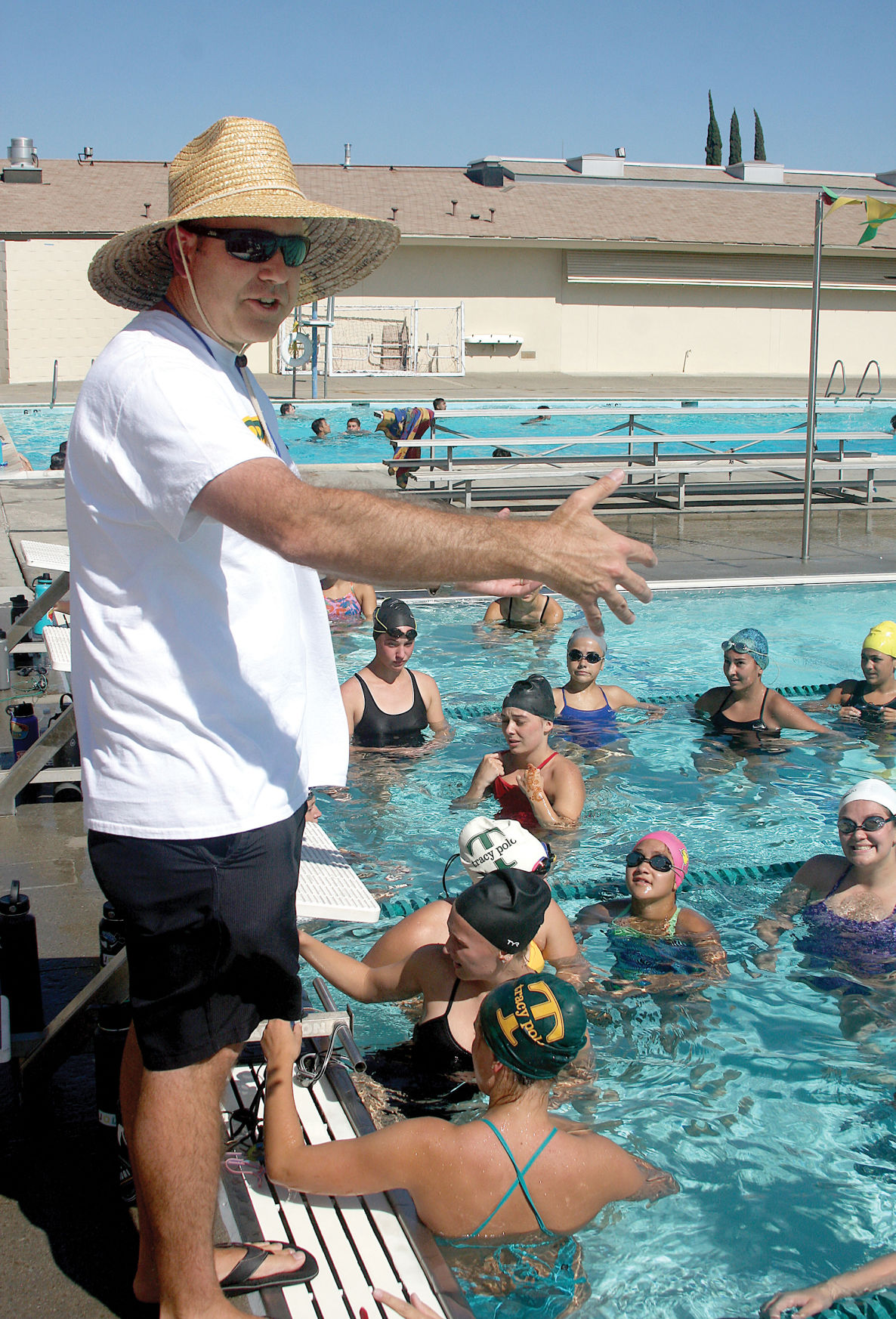 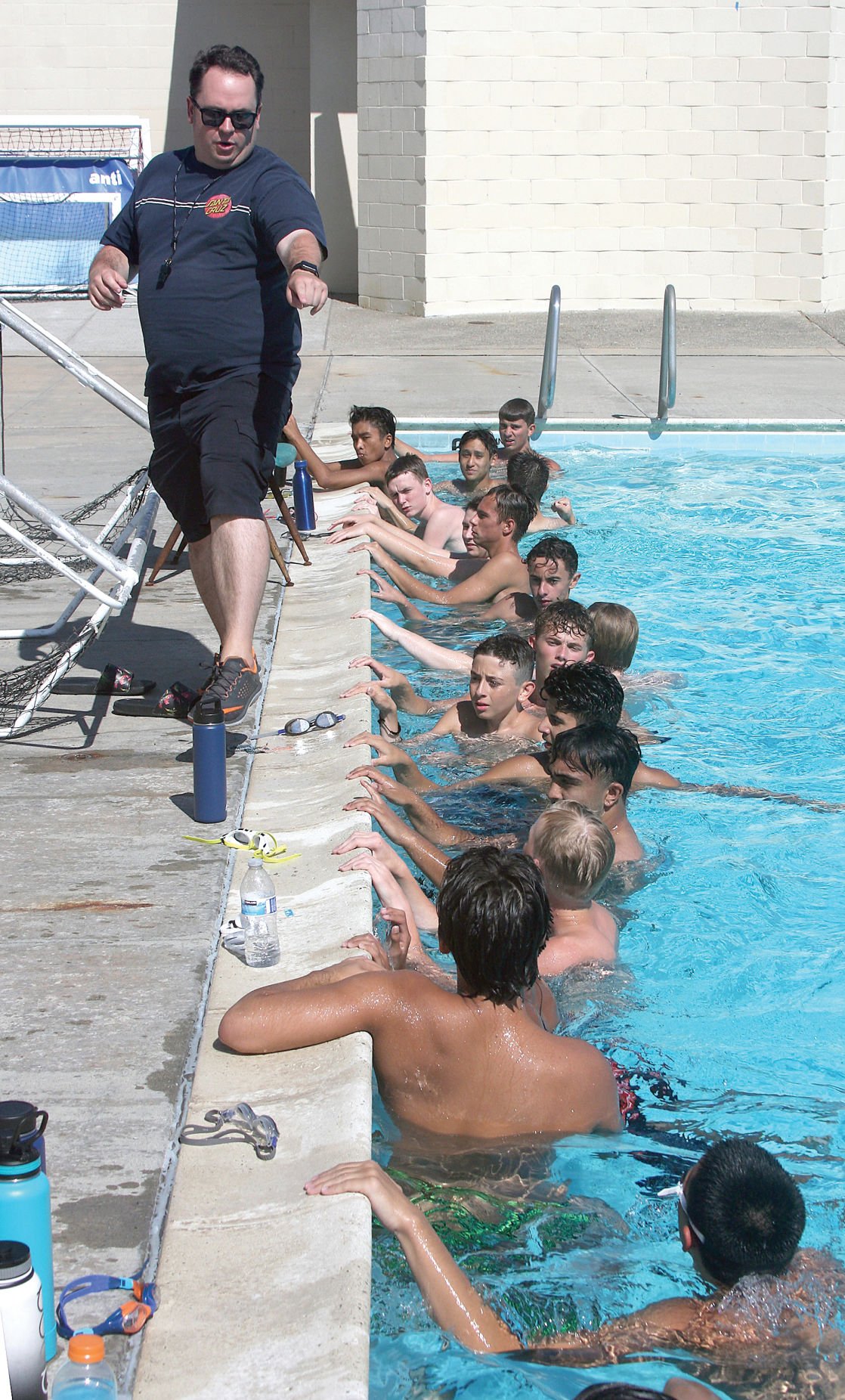 Tracy High boys water polo coach Jacob Hunter gets his team ready for another round of drills Wednesday.

The diving pool at Tracy High has long been the venue for Bulldog water polo games, but the Tracy High teams will play their home matches at West High this year now that the Tri-City Athletic League requires all games to be played in regulation-size pools.

Tracy High boys water polo coach Jacob Hunter gets his team ready for another round of drills Wednesday.

This year, the Tracy High water polo program gets a new start, with new coaches and a lot of new players.

Todd Lieberg and Jacob Hunter have taken over as coaches, the third coaching change for Tracy High water polo in the past five years. Both coaches come with experience running the Tracy Tritons youth swimming program, and both have experience as volunteer assistant coaches at the high school level. As fathers of Tracy High water polo players, they wanted to do their part to keep the program thriving.

Lieberg, the girls coach, has been with the Tracy High program for three years as a volunteer. When he learned last year that then-coach Julie Verwijst was moving out of state, he knew that someone needed to step up and manage the program.

His first task was to make sure the girls program continued to draw players. He starts the season with 55 girls, some new to water polo, and some new to the pool.

“It’s not like softball or soccer where they’re starting when they’re 5 years old. When they hit high school, they start water polo,” Lieberg said. “There’s a few girls that had played club, but very few. I took it upon myself, I was going to girls basketball games, girls soccer games, girls softball games, trying to find the athletes on those teams and recruit them, and I’ve actually found quite a few.”

Senior Sami Lieberg, the coach’s daughter, said it makes her optimistic for the new season.

“This is the most girls we’ve ever had in my four years here,” she said. “A lot of them have done other sports and that will transfer well. Water polo is not super popular in Tracy, but I think any athletic experience is good.”

Senior McKenna Bowman added that the girls who have been on the team since their freshman year did their part to recruit a team.

“It really did come from all of us talking to most of our friends and putting the word out as a player, and talking about the coaches environment and the player environment,” she said, adding that last year’s team was a big improvement over previous years and that culture has carried over to this year.

Hunter, the boys coach, has 26 players so far and can take more well into September. With a son and a daughter in the program, he figures he can stay involved for at least the next four years.

“We want to see the kids have regularity, maybe five, 10 years with the same coach, and actually be able to develop throughout it,” he said.

Hunter has experience as a volunteer coach with Kimball High and the Ellis club water polo program.

While the Bulldogs don’t have nearly as many boys as girls playing water polo, Hunter expects there are still enough for both varsity and junior varsity teams. He noted that 11 players are seniors, forming the core of the varsity team, and 11 are freshmen, who can start with the JV team. Each team in a water polo match has seven players in the pool at a time.

“The idea is to keep these freshmen around and build up the program,” he said, adding that his experience with the youth programs gives him the opportunity to bring new players into the sport. “I will pitch to the kids and say, ‘Hey, you’re going to Tracy next year. Let’s play some polo.’ It’s been a good opportunity, good timing to help this program out.”

Senior Caden Fry, captain of the boys team, sees a lot of promise in his new teammates.

“I think that we’re going to ready for the next few years, the program itself, because there’s a lot of freshmen, so there’s going to be some pretty good talent there,” he said. “This is a very hard sport and it’s even harder to teach other people how to play it, but I’ve learned that, through my personal perseverance, that it becomes easier to teach everyone else.”

Also changing for Tracy High this year is the venue for home games. For many years, the Bulldogs have played in Tracy High’s diving pool, which is small compared with other schools’ pools. The Bulldogs will continue to practice at Tracy High but now will go to West High for competition.

Lieberg noted that the Tri-City Athletic League informed teams last year that all water polo teams would have to comply with the National Federation of State High School Associations’ minimum depth and size requirements for pools.

Under the federation’s rules, a water polo pool must be 75 feet long, 45 to 66 feet wide and 6½ feet deep. Lieberg noted that Tracy High’s lap pool, which is long and wide enough, is only about 4½ feet deep. The diving pool is deep enough, but it’s only about 60 feet long and less than 40 feet wide.

That means the transition between defense and offense will be tougher as players cross the longer pool. Tracy boys team captain Fry said it also emphasizes the importance of effective outside shooting.

“We’re used to playing in a really small pool, so with all of our games in that bigger pool, we’re going to have to learn to spread out more and basically just have to be stronger and faster in the pool,” he said.