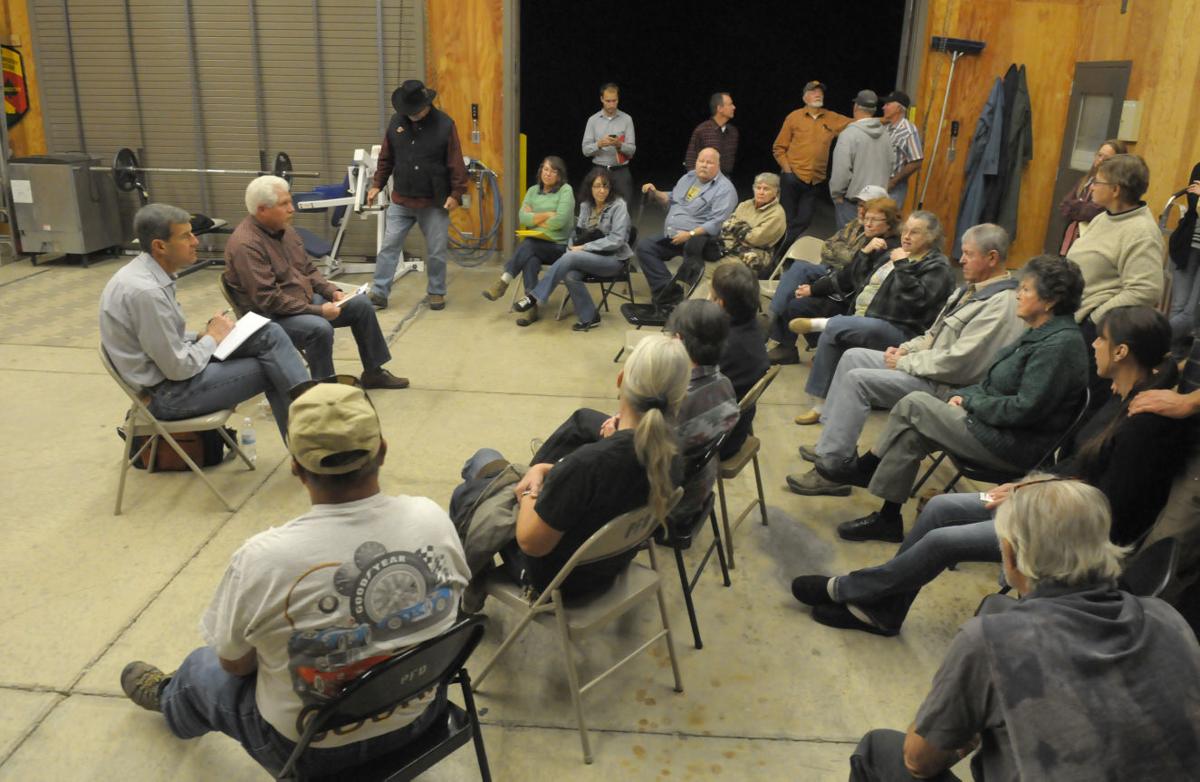 San Antone Valley, Del Puerto Canyon, and Mines road residents and representatives sit and listen to Stewart Gary and Samuel Mazza as they field concerns and take note of the change in demographics in the rural area surrounding the Sweetwater Cal-Fire station. 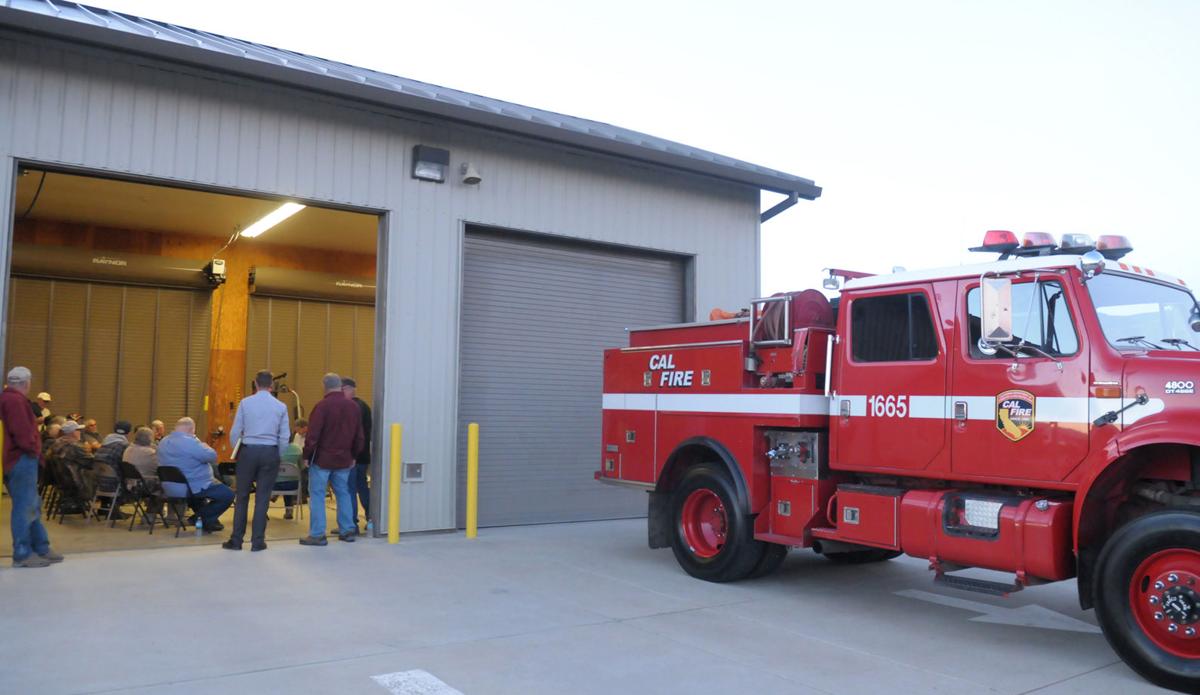 San Antone Valley, Del Puerto Canyon, and Mines road residents and representatives sit and listen to Stewart Gary and Samuel Mazza as they field concerns and take note of the change in demographics in the rural area surrounding the Sweetwater Cal-Fire station.

Area residents made a push to bring year-round emergency services to the hills west of Interstate 5 during a meeting at the Cal-Fire Sweetwater fire station 25 miles west of Patterson in the San Antonio Valley Oct. 20.

The meeting, hosted by Stewart Gary and Samuel Mazza of Citygate Associates, LLC Fire and Emergency Services, brought close to 30 concerned residents and representatives together to voice their desire to post year-round emergency service responders at the recently-built station.

Currently, the rural Santa Clara County fire station is required by the state to be staffed during the fire season, which leaves the station unmanned during the winter and spring months.

Gary and Mazza, whose company is being funded by the County of Santa Clara, facilitated a brainstorming session guided by the rural Diablo Range residents who will help them in their preliminary assessment that they plan on presenting to Santa Clara County staff in late December.

"The important issue is to get the demographic of the risks out here," Gary told the crowd at the beginning of the meeting.

The rural Del Puerto Canyon, Mines Road and San Antone Valley residents wasted little time in expressing their concerns to the associates, through which a common thread resounded.

Other residents in attendance chimed in, noting that increased activity from bicyclists, motorists and other non-area residents has increased the danger on the rural roadways surrounding the Sweet Water fire station.

"It’s the poor man’s vacation," Katrina Couch, a local resident said in regards to the recent influx of attention shown to the hills west of I-5.

Another attendee commented on a specific instance in which the rural roadways were inundated with bicyclists.

"Ever since the tour-de-whatever came through here, there’s been one week every year that organizes and comes up from San Jose," the resident said in reference to the Amgen Tour of California bicycle race that saw stage riders with crew in tow pass through the area in 2008, 2009 and 2012.

"The same day a group from Livermore and Patterson all come through," the resident said.

Another resident relayed an instance where a bicyclist was injured when the Sweetwater fire station was staffed, and emergency response occurred within about three minutes.

"If not staffed, he would have been laying in the ground for one and a half hours," the resident said.

When asked of the CHP response in the area, an instance was recalled from an accident in which an officer took four and a half hours to respond when a motorcyclist crashed.

"The responding officer was side tracked by two other calls on the way up here," the attendee said.

Other residents at the meeting described their discontent with a premature county official assessment, which reported that the call volume in the Sweetwater coverage area does not warrant year-round emergency service staffing. During the brainstorming session, it was revealed that this apparent lack of need for year-round staffing might have derived from the self-sufficient nature of the folks who live in the rural mountain region and that resulting effect on the emergency call log statistics for that area.

"If there’s an accident during the winter time, we know no one’s here, so we don’t call 911," one resident in attendance said. "We pile ’em in the car and drive to the hospital, so those calls won’t show up."

KBS Announces the Appointment of Christian Cornelius-Knudsen as President

"I’ve pulled motorcyclists out of ditches," another attendee said. "If we decided to not help anyone for a year, then we’d have a whole bunch of incidents on the record."

Another told of the harsh realities that responding law enforcement officers have to endure while covering the 600-mile beat that encompasses the area in question surrounding the Sweetwater fire station.

"Folks up here call their neighbors," another resident said. "I’ve called the Sheriff before, and I won’t call them anymore. They want crossroads that are nowhere close to here."

While fielding concerns from area residents, Gary spoke from his background in assessing fire districts.

"If I’m in an urban area, I need to know what my workload is," he said. "What we do is important to list what’s going on. We want to understand the demography so when we go to the county they’re not just looking at call data; we’re examining the risk as well."

According to Mashelle Bullington, owner of The Junction Bar and Grill, the risk for accidents is high.

"We see and get accidents reported to us almost every weekend," Bullington told the associates. "When there’s an accident up here, that’s where we go."

Another resident spoke of the possibility of leaving a stocked fire truck to be accessed by residents during the winter months when mandatory staffing of the Sweetwater Cal-Fire station is not required.

"If we’re not going to get the resources we need, allow us to take care of ourselves," the resident said.

Others harked back to when a volunteer fire department helped man the old Sweetwater fire station, before stricter Cal-OSHA requirements shut down the volunteers. Some explained that having a volunteer presence might give Cal-Fire the opportunity to back out of providing their own staffed personnel for the station, while others showed disdain for providing any volunteer service at all.

"What if we don’t want to help anymore?" one attendee said. "Why should people come up here and expect free (volunteer) services?"

"In this community, most of us have gotten older and we don’t want to help anymore," one woman said.

Potential risks in the area as noted by the crowd in attendance include increased traffic from motorists; increased bicycle traffic; hazards from both illegal and legal marijuana growing operations; increased usage of both public and private off-highway vehicle parks; and the dangers involved in both hunting and wild animals, as well as the handling of livestock that roam the hills.

By the end of the meeting and brainstorming session, Gary and Mazza had a good sense of the demographics in the area and the potential risks involved.

"You’ve helped us understand that there’s a change in demography in people up here," Gary told the crowd in closing. "It’s been a really good learning experience."