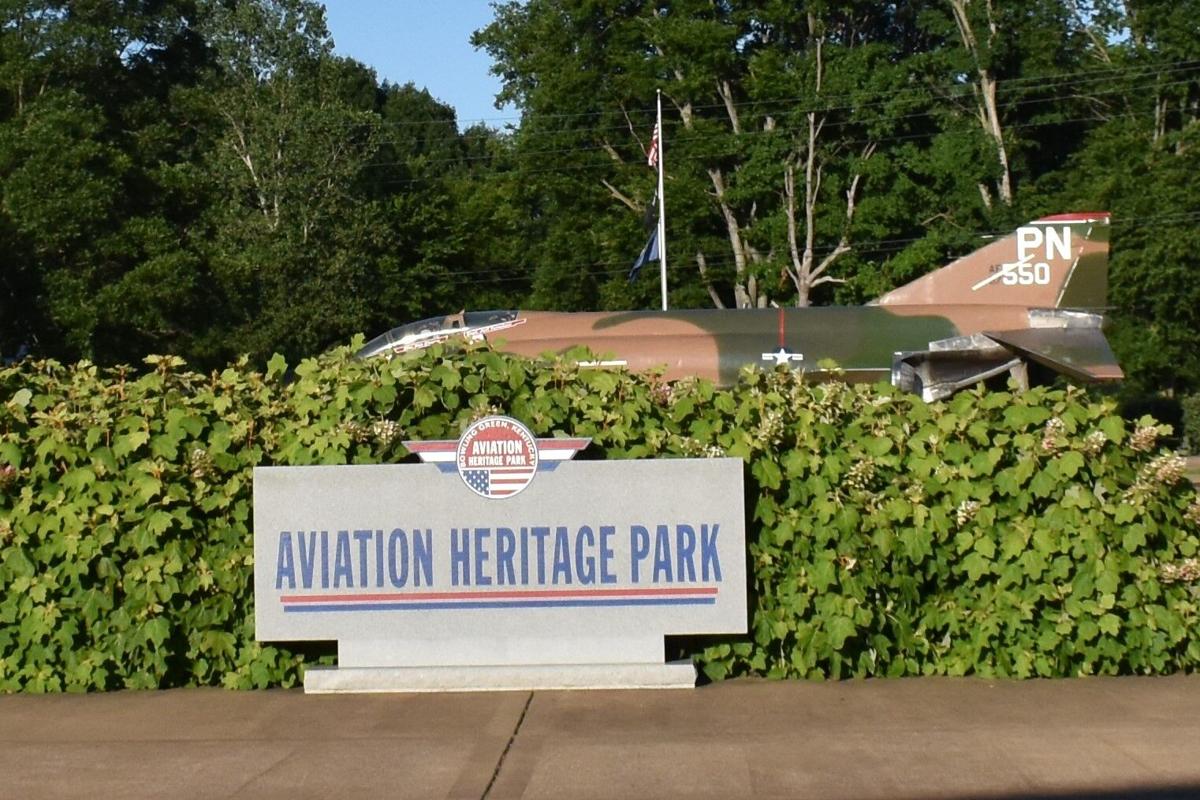 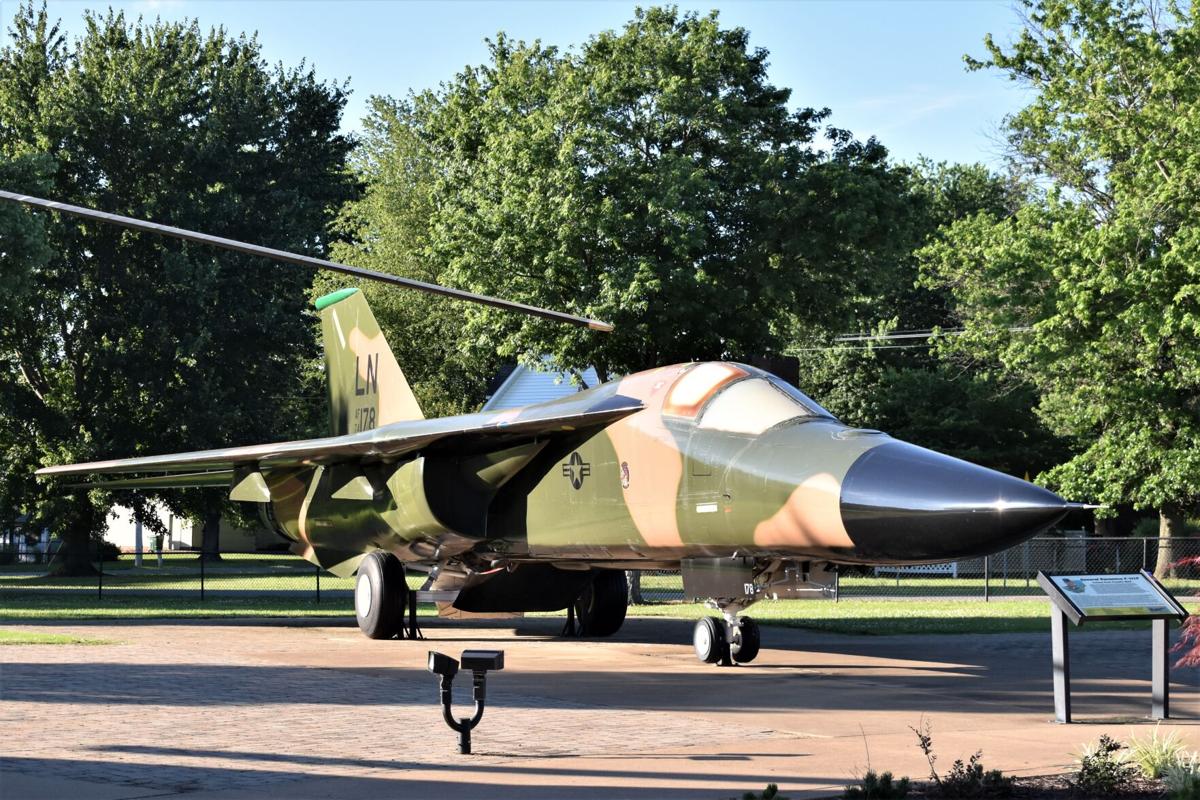 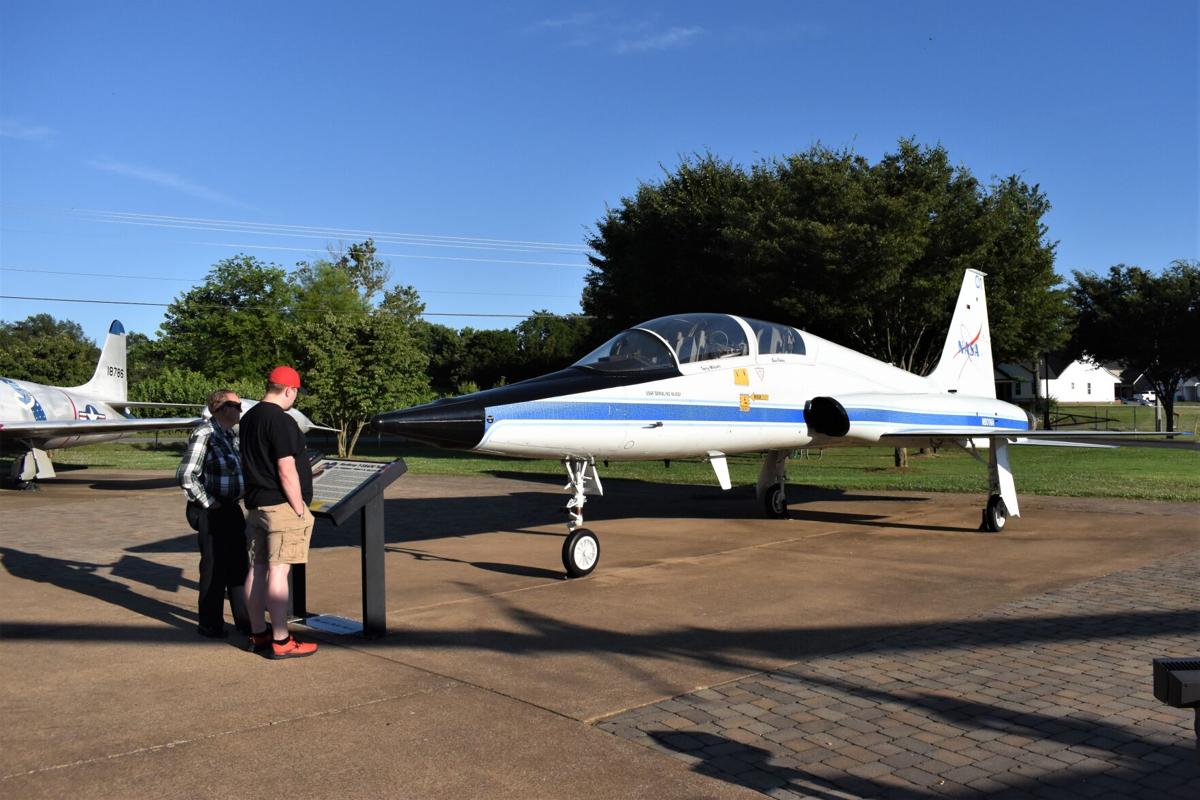 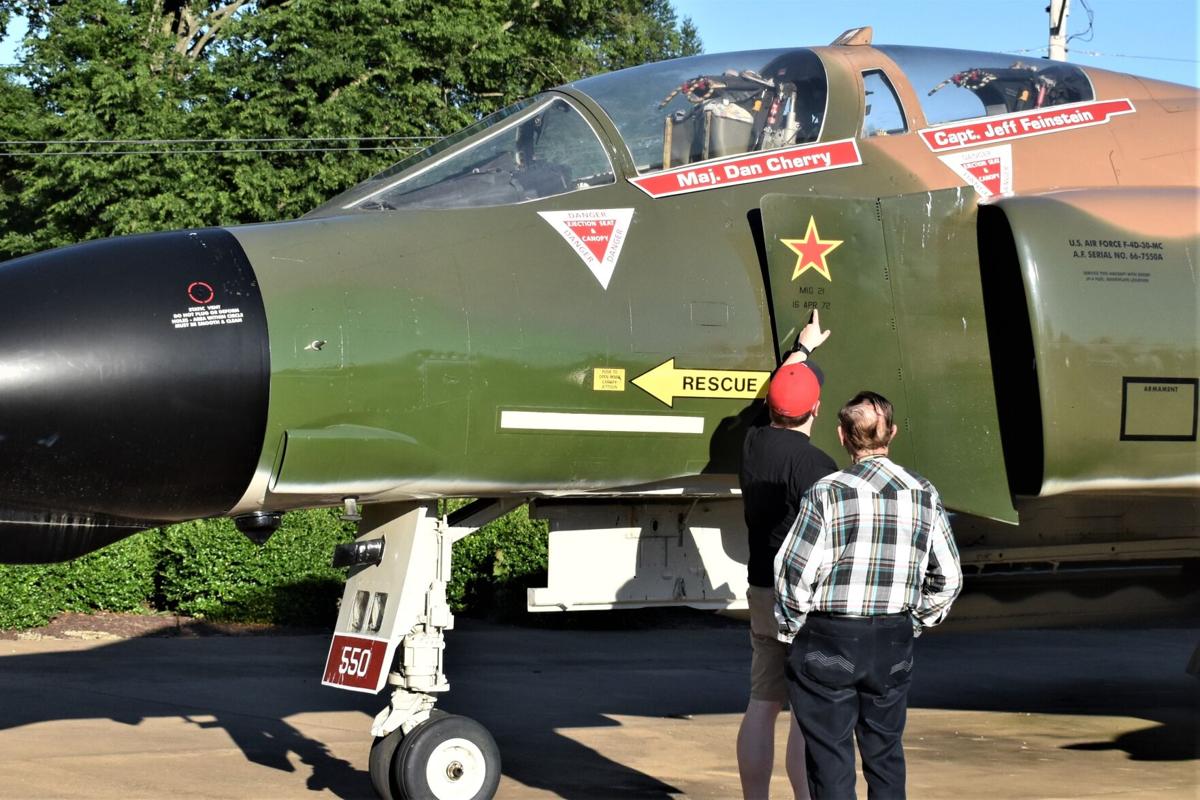 Ken's son and father reading the MiG-21 kill credit on the side of this special F-4 Phantom, the very aircraft which was used in the dogfight in 1972. 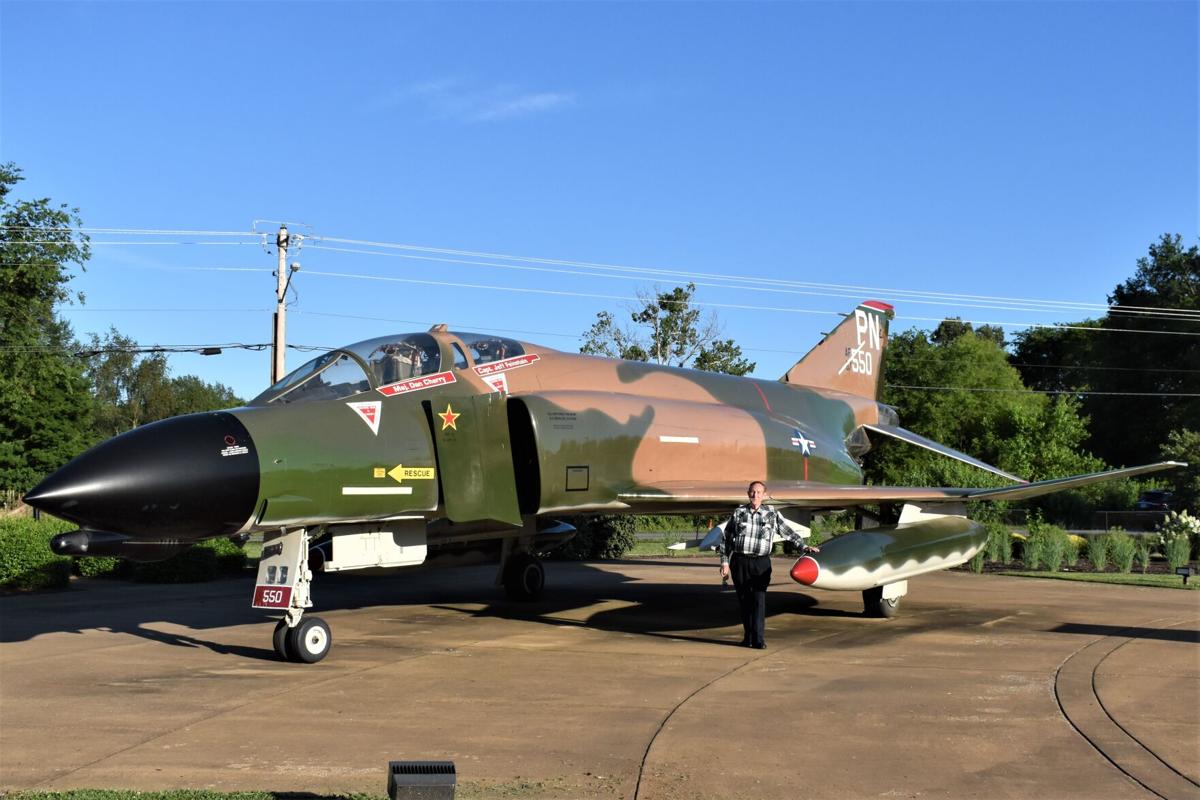 Ken's father standing with the F4D which was built while Mr. Hasekamp worked for McDonnell Douglas Aircraft. He mostly likely made a part for this warbird. 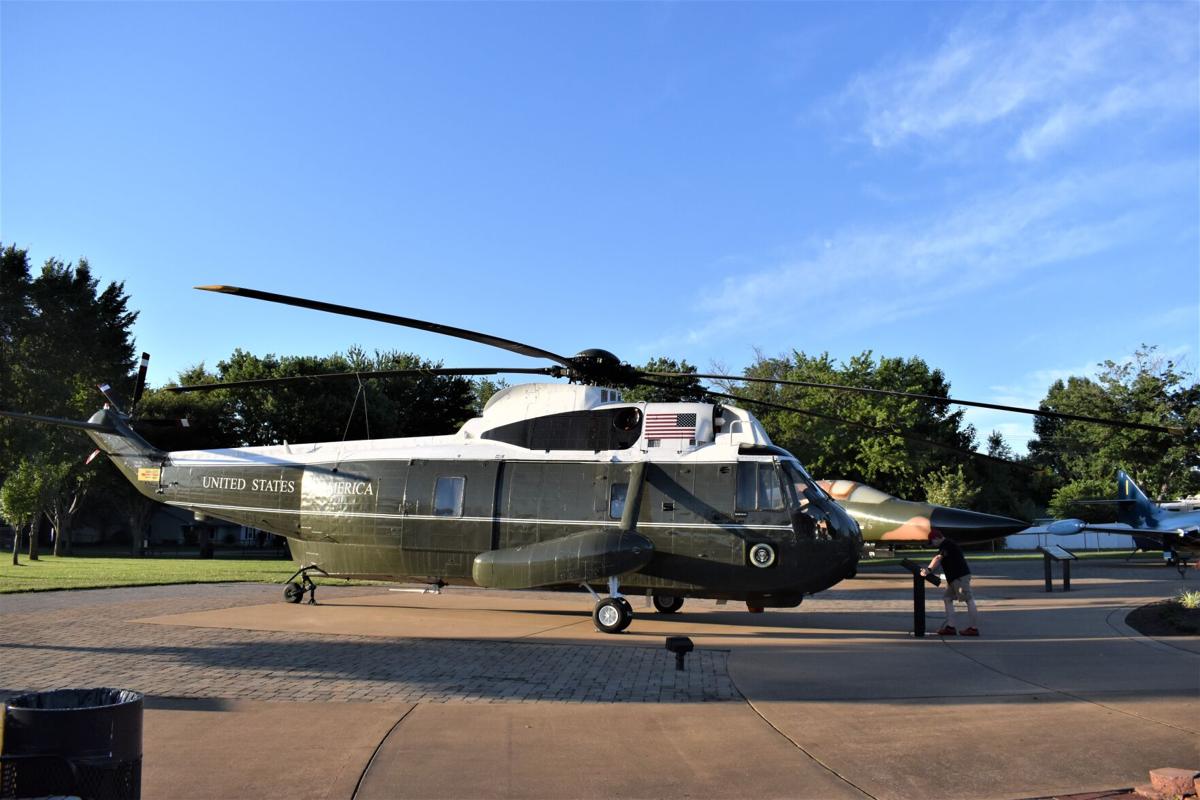 Aviation Heritage Park's Sikorsky SH-3 Sea King helicopter, painted as Marine One. The F-111 and F9-F Panther can be seen to the right. Ken's oldest son is reading the plaque for this aircraft.

Ken's son and father reading the MiG-21 kill credit on the side of this special F-4 Phantom, the very aircraft which was used in the dogfight in 1972.

Ken's father standing with the F4D which was built while Mr. Hasekamp worked for McDonnell Douglas Aircraft. He mostly likely made a part for this warbird.

Aviation Heritage Park's Sikorsky SH-3 Sea King helicopter, painted as Marine One. The F-111 and F9-F Panther can be seen to the right. Ken's oldest son is reading the plaque for this aircraft.

Greetings, neighbors. The Patterson Hasekamps had some very special friends visit us this weekend. They just left this morning before I started writing this Ken’s Korner. Mike and Rachel helped us as our youth pastors over twenty-five years ago in Columbus, Illinois. It was the first time their two sons had met us. Those sons may never be the same.

On Sunday, we left Patterson around 1:00 p.m. and it was nearly one-hundred degrees. We took them to Monterey where it was sixty degrees. At one point, Patterson was one-hundred-six. This place we live can be so interesting and fun. Cold on the coast and melt-your-face hot in the Central Valley.

BUT this Ken’s Korner is going back in time to June 2021. I know that was just last month. Remember last week and The Great Race? It was just the first day of the three-generation Ken Hasekamp Fun Tour.

After getting back to St. Louis from Rolla, Missouri, we started preparation for the next trip east which would be an overnight stay. We left Hasekamp Hill (where my dad and brother’s family call home) at 0900 hours. Besides my Dad, son and me in the rental car, we had my one and only niece, Sarah, with us. She needed to be driven to Murray, Kentucky where she is going to college. Her car broke down there the week before and needed to be picked up.

Our goal this day was Bowling Green, Kentucky. Dropping Sarah off would only cost us about an hour while saving her father a six-to-seven-hour trip plus a rental car. This would also allow her grandfather to see where she has been attending university. All good except we could not find a place to have lunch where we could eat inside. Weird!

Once back on the road, we headed for Bowling Green and our first objective. They have a very special little attraction called the Aviation Heritage Park (aviationheritagepark.com). My son had done some research and we decided we had to bring Grandpa to see this place on our trip. AND it was FREE!

In a city park, off a secondary road, sit seven old aircraft (five fixed-wing and two rotary-wing). All are in amazing condition, some restored. All of them have a connection to a citizen of Bowling Green in their history or a very special story.

One example of this is the Sikorsky SH-3 Sea King helicopter. It has been restored to look like a Marine One which ferries the president, vice-president and other very special dignitaries from the White House and other locations. A Bowling Green son, Colonial Arthur “Mac” Reynolds, flew several presidents in such an aircraft after serving with distinction and honor as a combat pilot, test pilot and more. Colonial Reynolds is the reason this copter is painted in Marine One livery.

The other aircraft at the Aviation Heritage Park are an F-111 Aardvark, F9F Panther, F-80 Shooting Star (a.k.a. “T-Bird”), T-38 Talon, UH-1 Huey and F-4D Phantom. It is the last aircraft which was the main reason for bringing my Dad to this place. Let me give you some background.

My father worked for McDonnell Douglas Aircraft which was based out of St. Louis. Dad served as a machinist over some thirty-two years, crafting parts for aircraft and space projects from the mid-1960’s through the late 1990’s. This F-4D, serial number 66-7550, was built during my father’s tenure there, meaning there is a very good chance he made a part for this plane. COOL!

This aircraft, while being flown by Brigadier General Daniel Cherry, downed a Russian-made MiG-21 on April 16, 1972. The dogfight lasted some five minutes and ended when Cherry and his weapons officer, WSO Jeff Feinstein, took out the MiG and watched its pilot ejected.

The Vietnamese pilot and General Cherry later reunited in Bowling Green and visited this very aircraft at a special ceremony on April 16, 2009. For the complete story, please read the book “My Enemy – My Friend.” The History Channel has also done this story.

The F-4D Phantom was restored to the exact livery it wore on the day of the famed dogfight nearly fifty years ago. While being a priceless warbird, it is also a symbol of reconciliation between two enemies locked in a life-and-death struggle. Just amazing.

If you ever get near Bowling Green, Kentucky, stop in at the Aviation Heritage Park. The new hanger should be done soon, so you will be able to see these special aircraft from the comfort of their new indoor static display area.

Thanks for reading. More coming next week in the Irrigator for the third part of our special trip to Kentucky and the main reason for the trip. Enjoy the day!