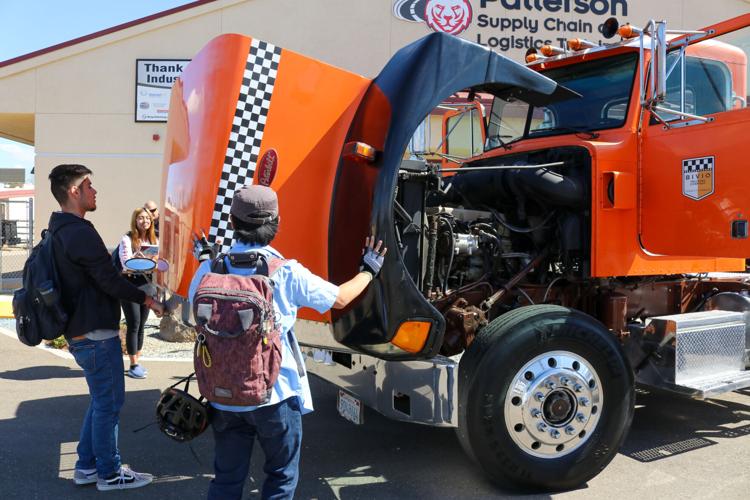 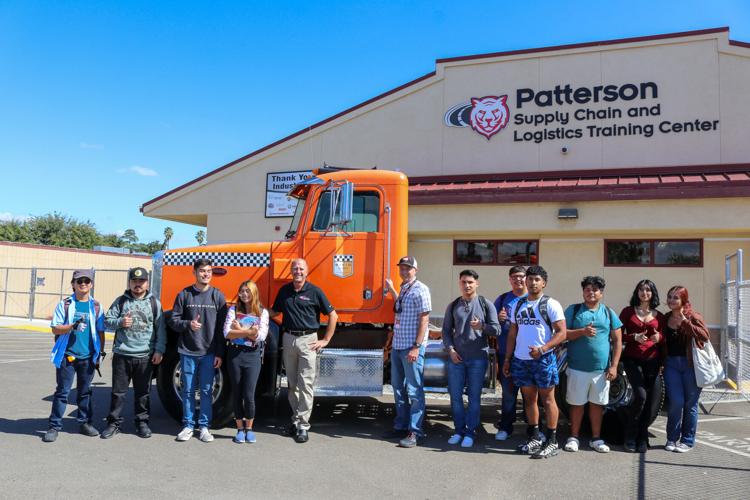 A 1979 Peterbilt Semi-Truck was delivered to Patterson High School’s Logistics & Transportation department late Tuesday morning. The truck, which was donated by Bronco Winery in Ceres, has been a long time coming.

“During the pandemic [I reached out] to industry partners [about getting a truck] and Bronco accepted the offer and put together a plan to donate this truck,” said Patterson High teacher, Dave Dein.

Although the process for actually receiving the truck took longer than expected due to repairs and renovations, the Peterbilt couldn’t have arrived at a better time.

“The training truck that we currently use seized operations [at the end of last school year],” said Dein. “We weren’t able to do a lot of the training like coupling, decoupling, air brake tests and back and reversing that we normally do.”

Bronco Winery, a 5-year affiliate of the Patterson Logistics & Transportation Department wanted to make sure that the truck was in pristine condition before they delivered on their promise.

“We took time to ensure that the truck was safe, sound and polished before we delivered it to [Patterson High School],’’ said Manager of Packaging and Supplier Development at The Bronco Winery, Mark Miles.

Miles is very fond of the Logistics & Transportation program at PHS and made sure to relay his desire to assist with the program to late great Bronco Winery owner, Fred Franzia.

“About five years ago I met with Mr. Garcia here at PHS,” said Miles. “Mr. Garcia and I have about twenty years of work history together and he introduced me to the program. At that point I met with ownership, the Franzia family and told them about my meeting with Patterson High School and about what they were looking to build as far the CTE programs and asked them at what level we would like to engage.”

Five days ago, on September, 15, Mr. Franzia passed away at the age of 79. For readers who are unfamiliar. Franzia is a legend in the wine industry. Articles of his passing were published immediately by NPR, the New York Times and the New Yorker. The inventor of the legendary, “Two Buck Chuck,” Fred Franzia’s goal was to make sure every American family had access to affordable wine. Believing that a good bottle of wine should cost no more than ten dollars. One of the last decisions Fred Franzia made was to approve the delivery of the 1979 Peterbilt to the students of Patterson High School.

“There’s been a couple times today that I shed some tears,” said Miles. “We delivered the truck today with Fred’s approval.”

On a conference call with both Dein and Miles, the duo said that during class, one PHS student asked for a copy of the signature that Fred Franzia used to approve the delivery so that the school could put it on the side of the truck.

“It’s not many times that student’s get to me on that level [emotionally], but he got me. It was pretty impactful,” said Dein, who plans on enlarging Fred Franzia’s signature and creating a transferable to place on the side of the truck.

The relationship between Patterson High School and Bronco Winery has been beneficial to both parties, as Bronco continues to support student education, and in turn, students have had the opportunity to work for and start their careers at Bronco.

“These programs are a huge steppingstone for them,” said Miles. “We currently have 4 previous Patterson High School students that are working for Bronco and one that left to start his own trucking business.”

The truck is ready for immediate use at PHS and already has student’s climbing in, out and around the hood to get a peek at their new instructional vehicle.