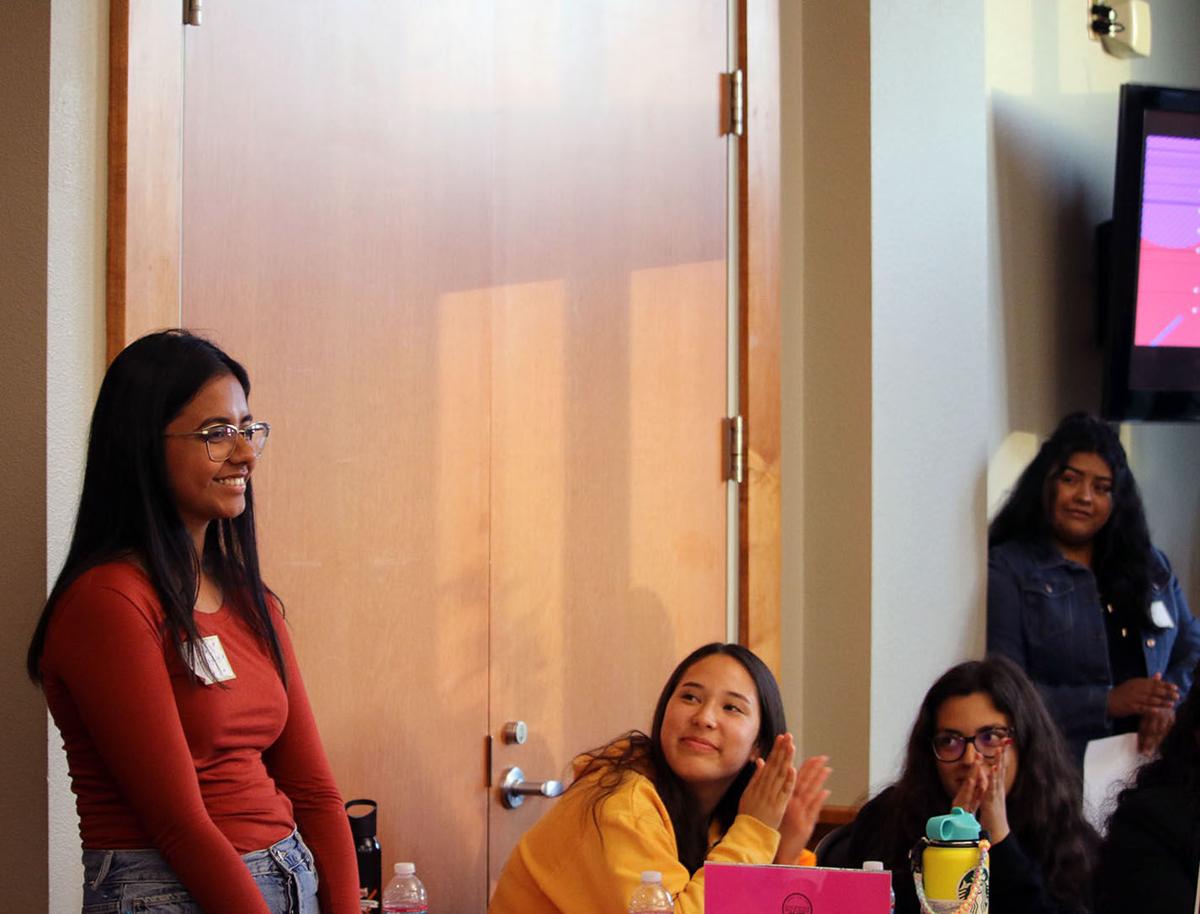 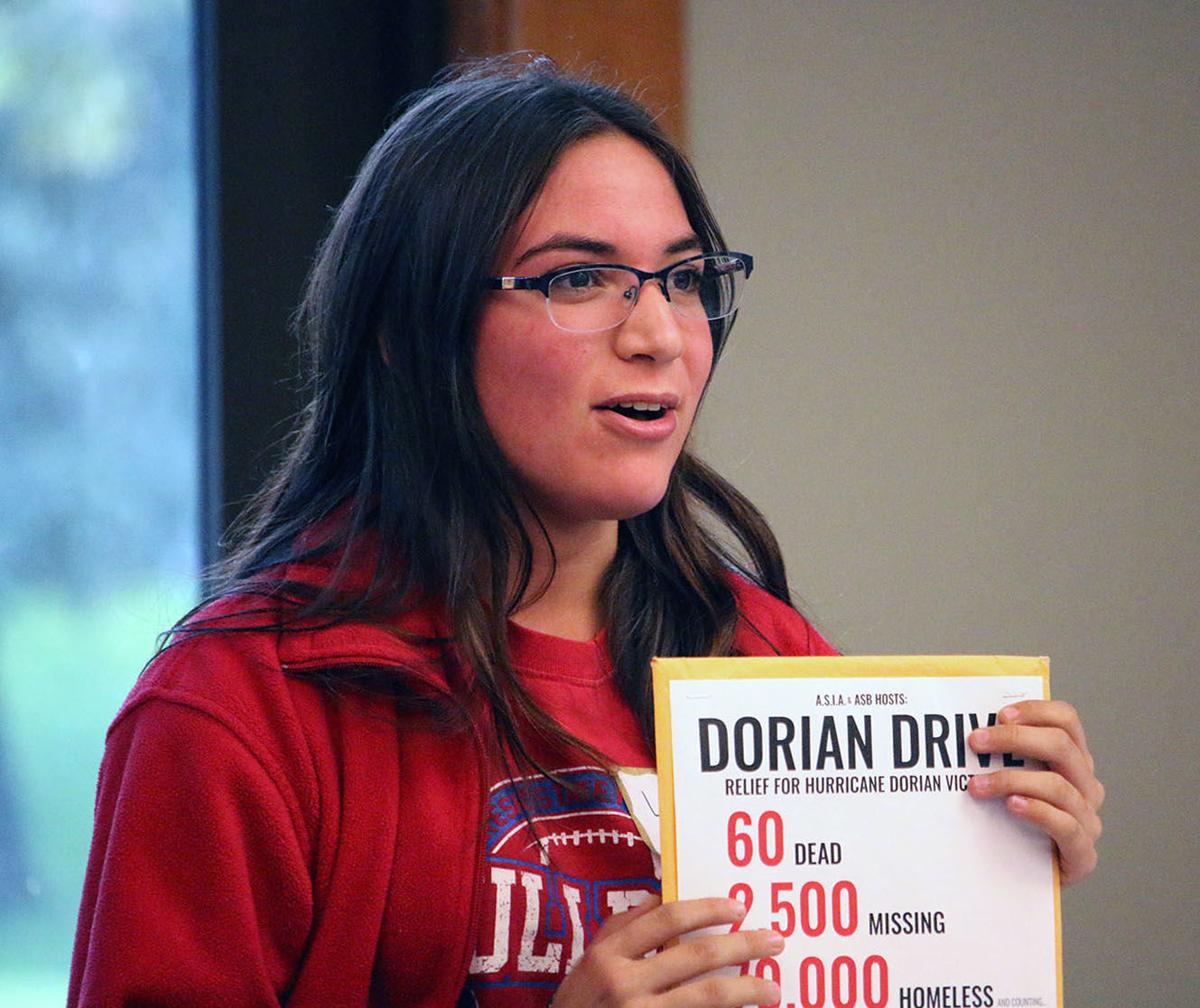 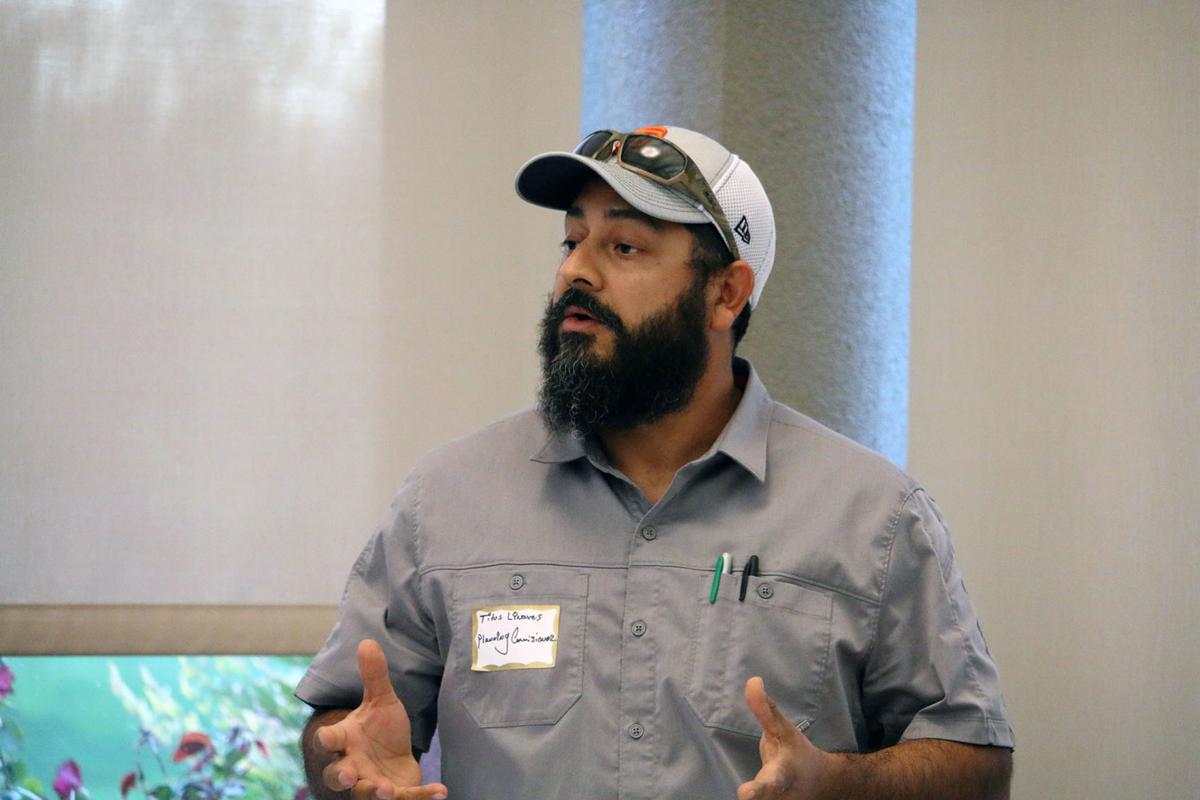 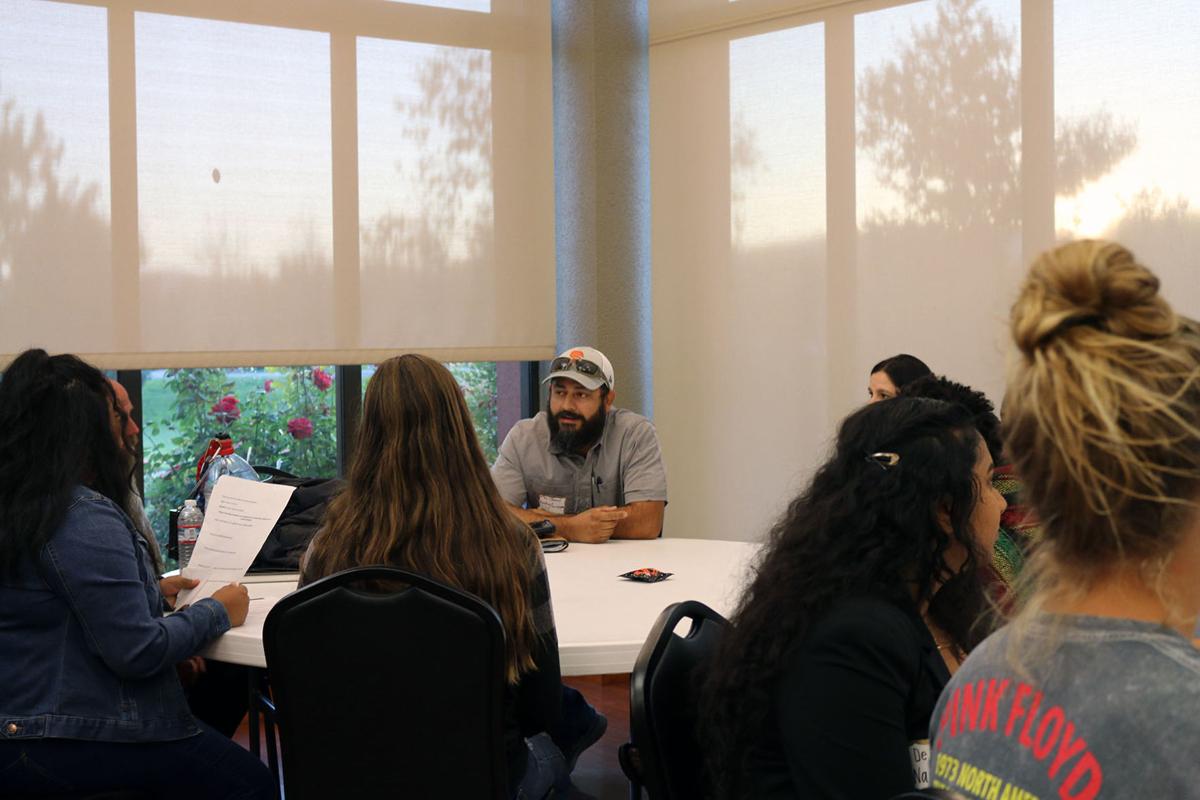 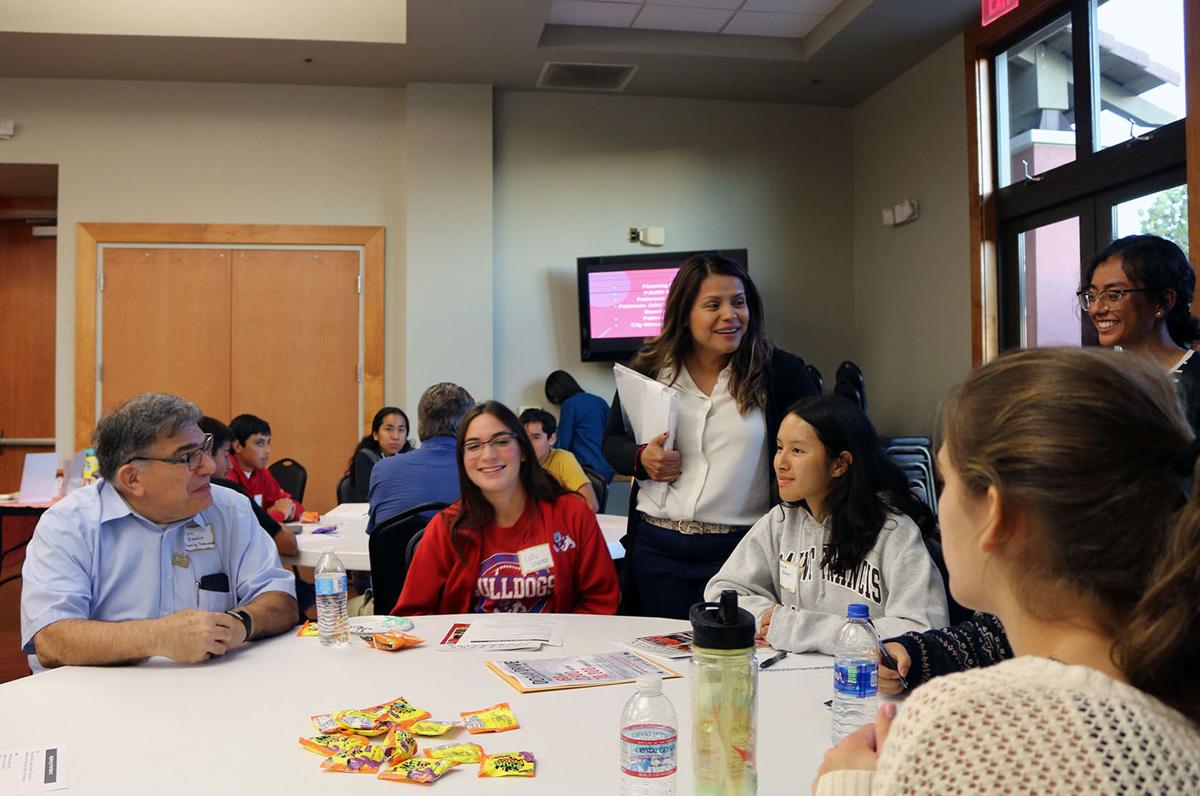 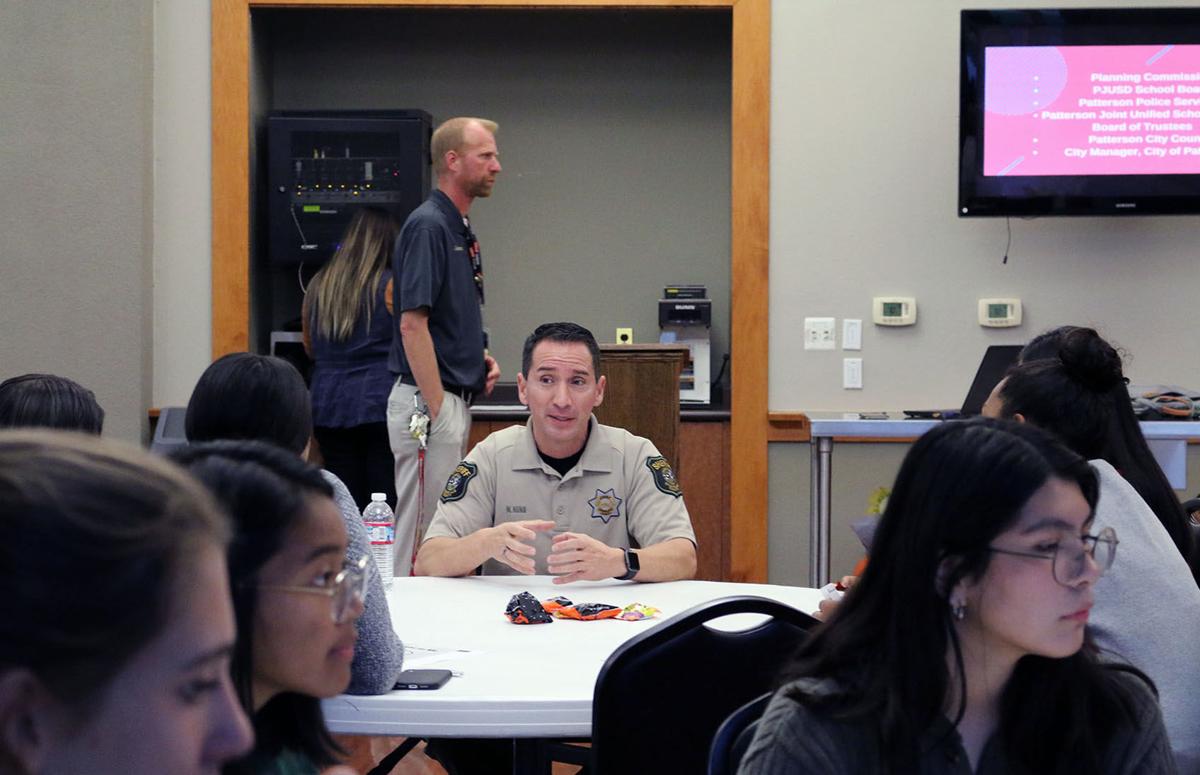 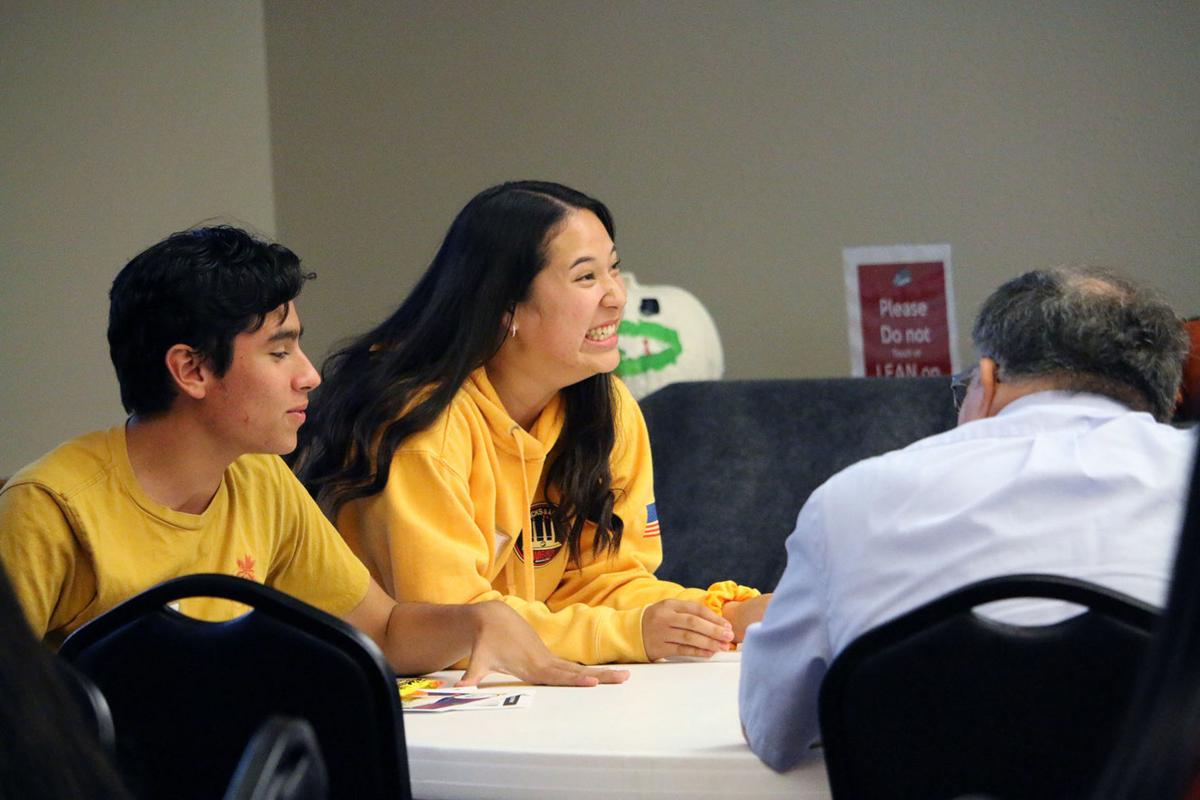 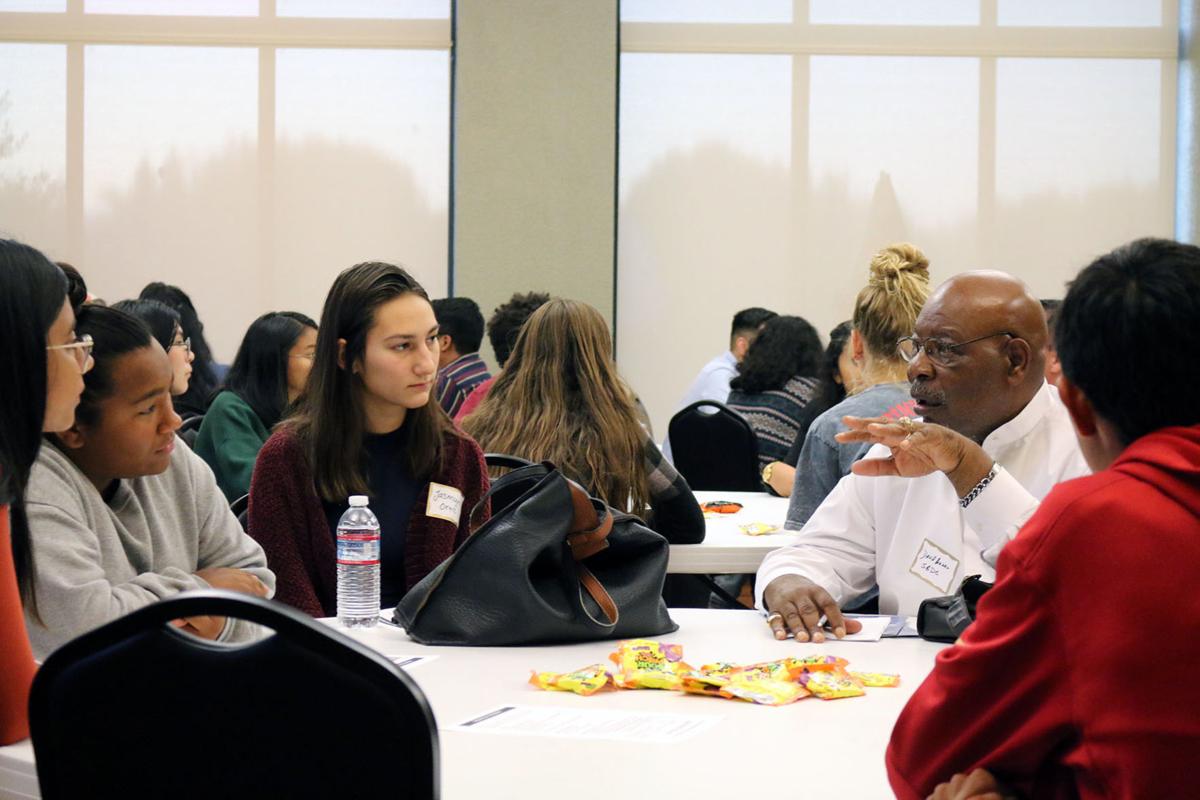 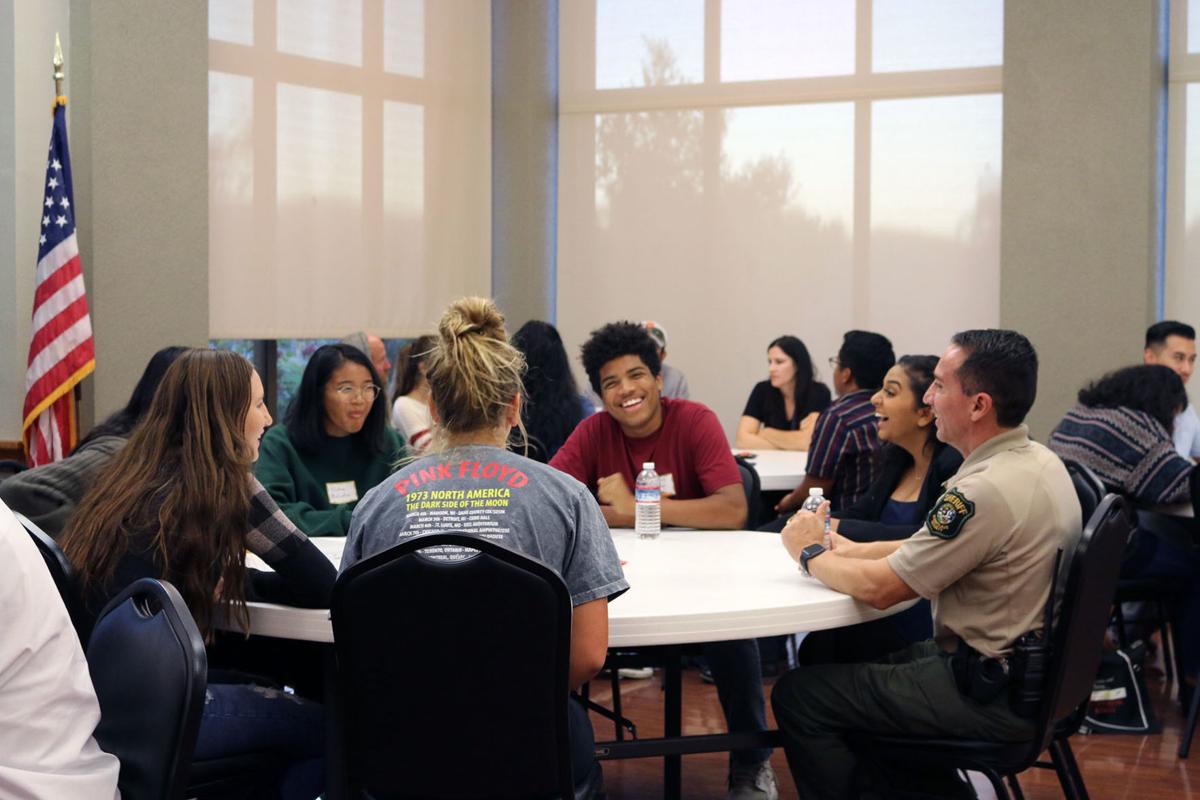 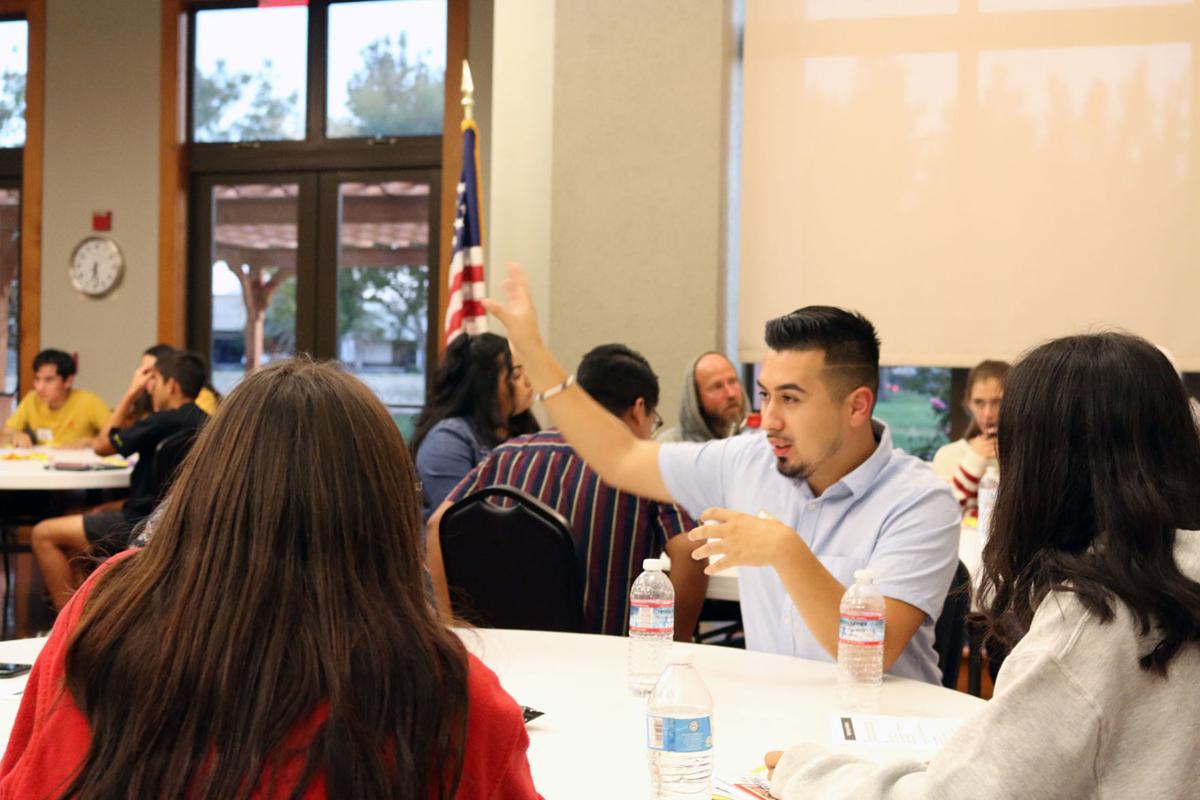 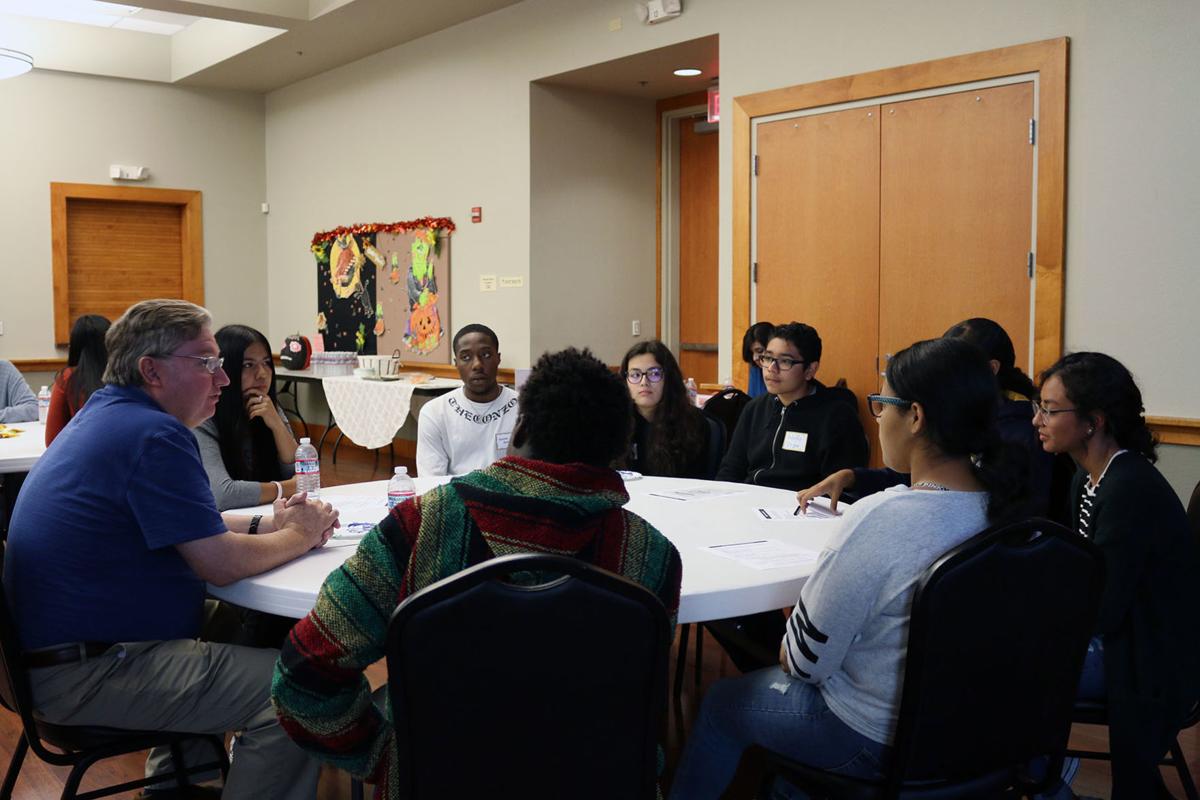 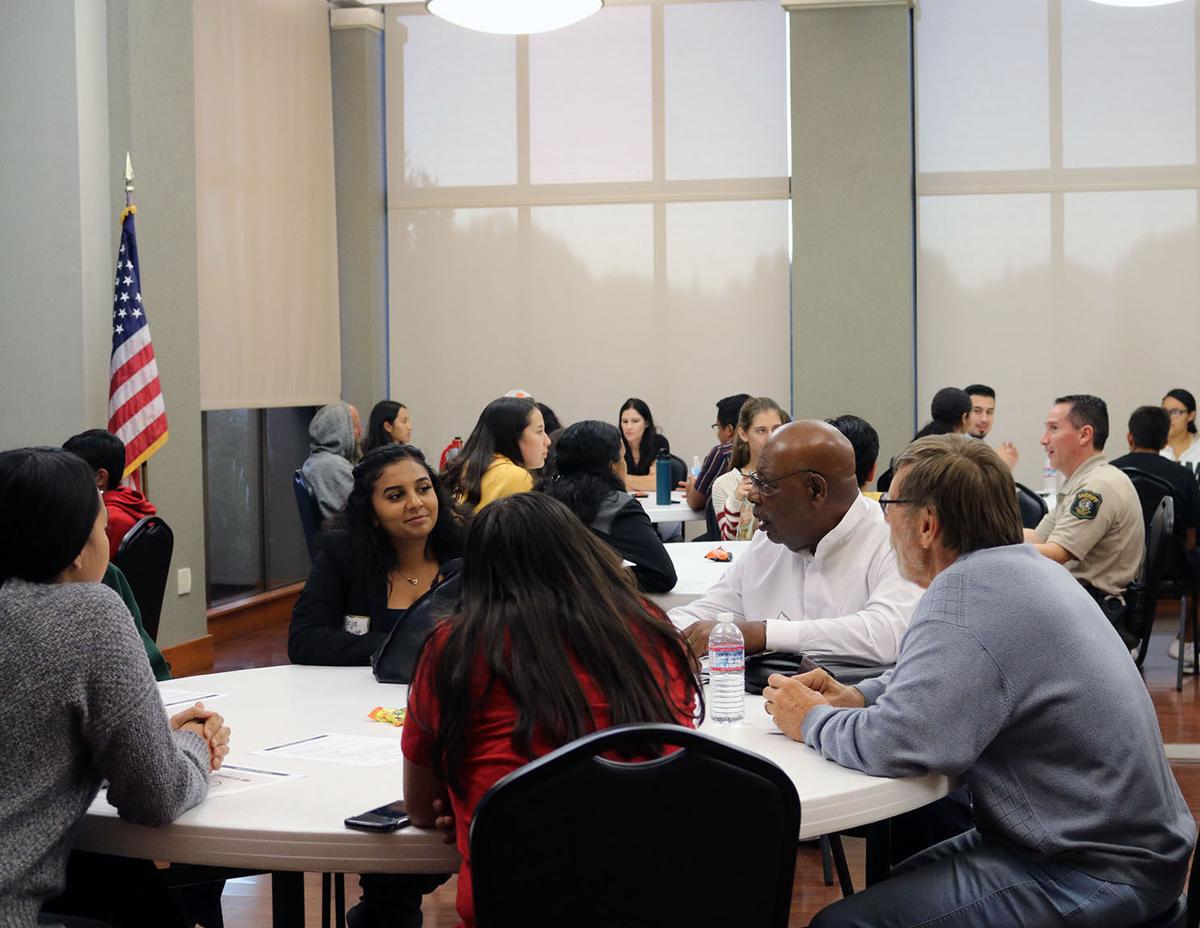 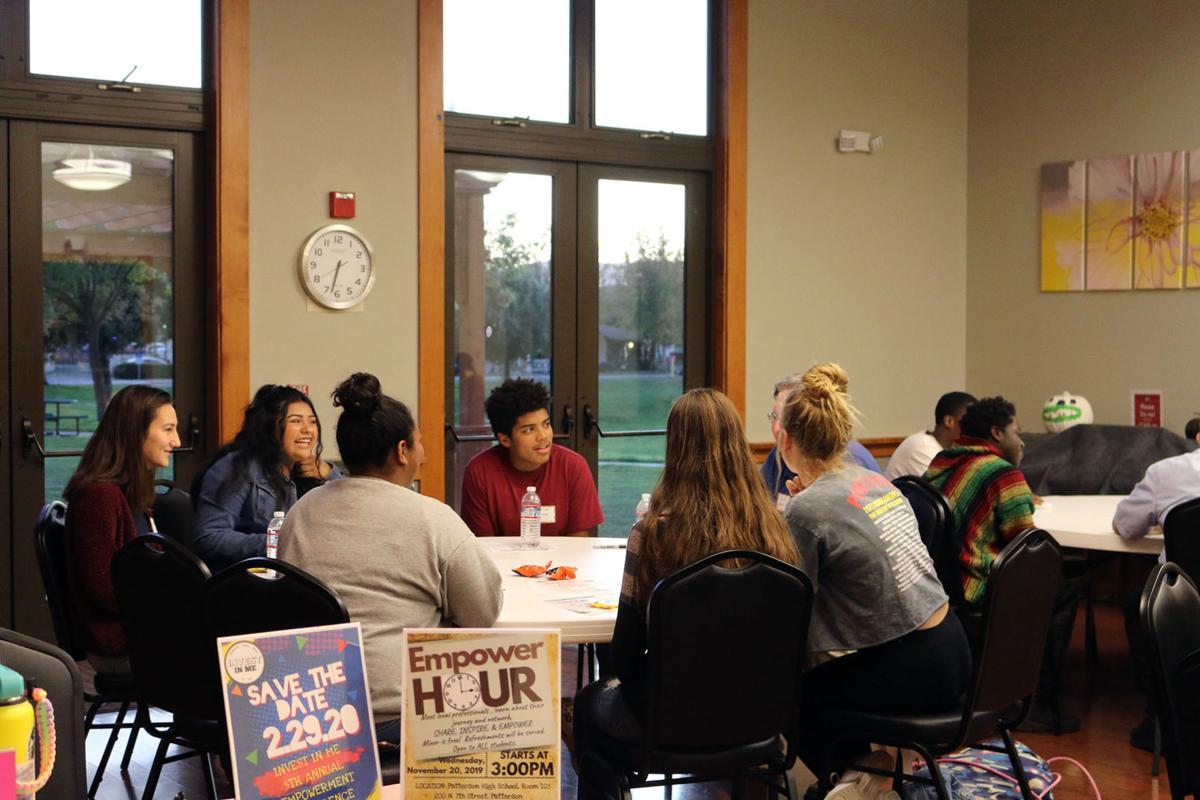 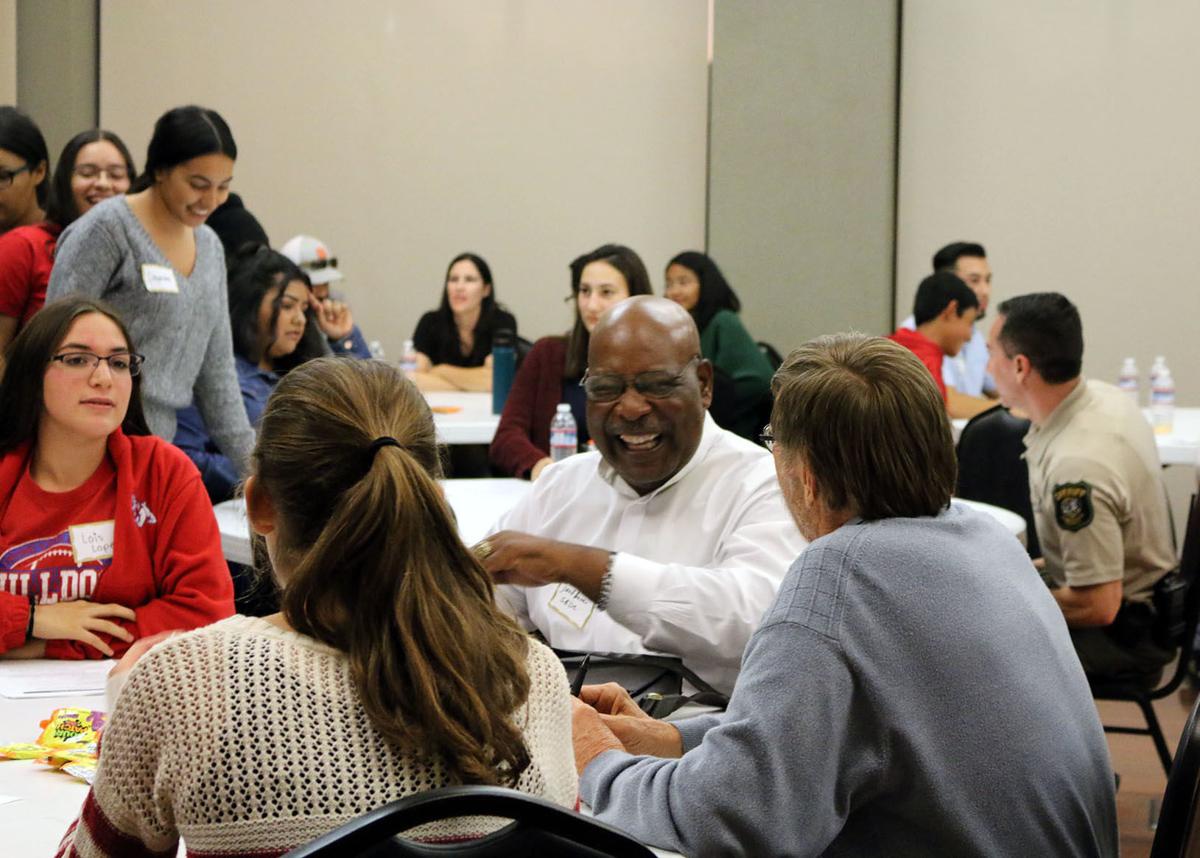 A group of about 40 local leaders, both school-age and adult, sat down for conversation last Thursday night at a meeting co-sponsored by Invest In Me, the City of Patterson, and the Youth Action Commission (YAC).

Addressing the students in the audience during her welcome to the Meet Your Local Leaders event last Thursday, Invest In Me founder Erica Ayala said the goal of the meeting was for student and community leaders to get to know each other, and to give the students an opportunity to learn about volunteer opportunities within the community.

“Why should I vote?”

In a presentation perfectly framed for the high school students in attendance, California State University Stanislaus (CSUS) political science major Mateo Maldonado spoke on the importance of voting. His relatively short presentation included a general overview of elections, how to register to vote and other information critical for new voters.

He also pointed out that local elections, such as City Council and School Board, “are important to you, and have a direct effect on your daily lives; in some way or another, will affect how the next few years of your income, your taxes, even, perhaps your social maneuverability, and depending on what kind of jobs you may be interested in pursuing, and education – there’s always a connection.”

Before addressing the nuts and bolts, however, Maldonado took a few minutes to explain to the young adults in the room (and perhaps provide a good reminder for the adults) how important it is for every eligible citizen to vote.

“I’m sure a lot of you have heard several times, like, well, my vote doesn’t matter. There’s so many people, you know, my vote is probably just a miniscule representation that in the end doesn’t have such an important value. But everybody’s vote matters,” he said; “especially in small elections, when we see few people voting.

“Why should you participate in something that tends to be so toxic for adults?

And maybe you’ve been told, growing up, that, oh, if you’re of a certain socio-economic class, where, depending on your race and your background, maybe your opinion isn’t as important. But your opinion is important. And especially in this political climate. I think it’s more important that our generation comes out to vote, more than ever.

There’s been a dramatic influx of money into politics,” Maldonado continued. “Millionaires and billionaires have more impact over the political discourse than at any other time in American history,” he said, before succinctly explaining how political action committees (PACs) and super PACs funnel money to influence everyday life by “help(ing) promote a piece of legislation or a candidate into communities,” which “are quite different, perhaps, from what our community’s, or our family values may be.”

Using the analogy of a schoolyard bully, Maldonado said “what they (wealthy interests active in politics) want from you is control. They win when they have control of you – when you don’t use your strength; you don’t speak up for yourself. When you vote, you take your power back. They want you to have to do the hard thing, and that is, take time to speak out, and vote.

“It’s easy to get frustrated,” he said, “but it has dramatic impact, when we come together and unite, and motivate all of us to vote, because it all matters in the long scheme of things. And that’s how we take power back.”

Maldonado explained the various “safe” ways to register to vote, which requires personal information, including at the high school, Post Office. He also pointed out that citizens can pre-register to vote at 16, and can vote at 18. Those who don’t wish to declare a political party should indicate “No party preference,” he said, rather than “Independent” – which is a political party.

Another concern Maldonado covered was how to obtain unbiased information on candidates and ballot measures, pointing out that nonprofits like the American Civil Liberties Union (ACLU), whose mission is to defend and preserve the individual rights and liberties guaranteed to every person in this country. Other resources listed online include the California Secretary of State, League of Women Voters, Voter’s Edge.

In their opening remarks, some of the community leaders shared words of wisdom.

Segoviano said, “your future is on the line here, so make sure you register to vote.”

Cross advised students to “get involved. If you’re too young to vote, you can still get involved by staying informed,” about what’s happening in your community.

Planning Commissioner Titus Linares also told the students “it’s very important that you get involved.” Pointing to the mayor of Stockton, Michael Tubbs, Linares advised them not to let their youth hold them back. “We need more leaders; female leaders,” he added. “Get involved.”

All of the attendees seemed to find the experience valuable. PHS student Yasmine Lewis learned how important voting is; her sister, Tatyana Lewis mentioned “the unsung heroes of the community.”

Another student said he learned that “change starts from the bottom.”

Michael Ekweme, also a senior, said he learned that “small town elections really matter. A lot of people don’t, like, they really just believe that the bigger elections are what we should pay attention to more, but really, like the small town elections play a big role.”

Cross said he appreciated the “quality of questions, and engagement of all the students – they were all interested; very polite, very professional. I was very impressed with that.”

Parker, who has taught at upper levels, said, “This is so beneficial… You give them (students) a chance to open up; even if they don’t open, even just that is so beneficial, it’s just amazing. I thought it was great.”

Bendix added: “The issue is getting involved. It doesn’t make any difference how old you are; you gotta get involved.”