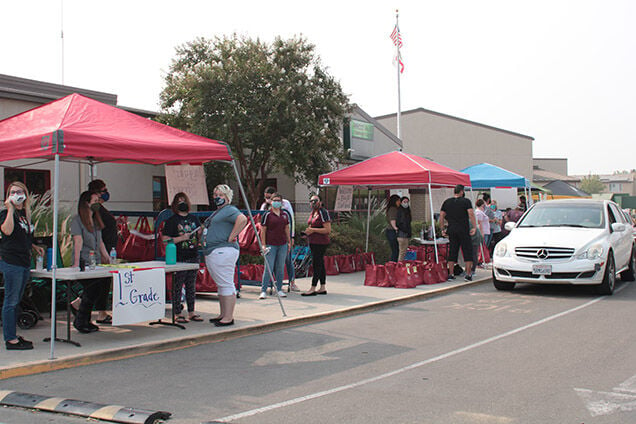 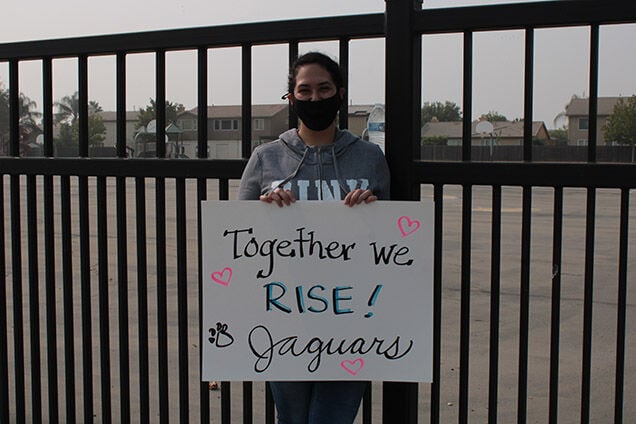 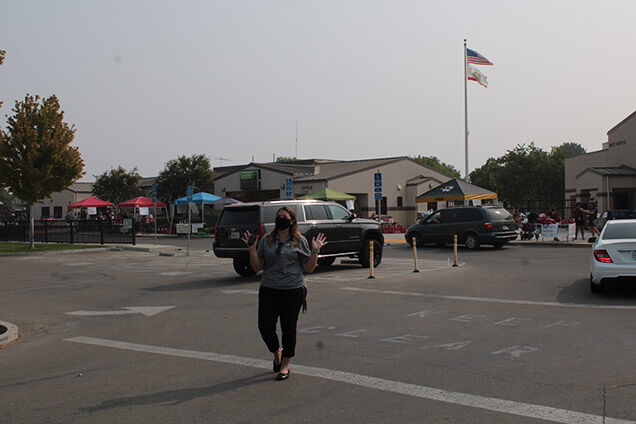 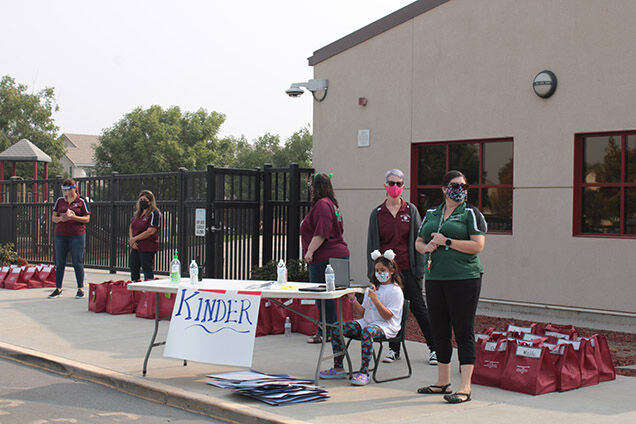 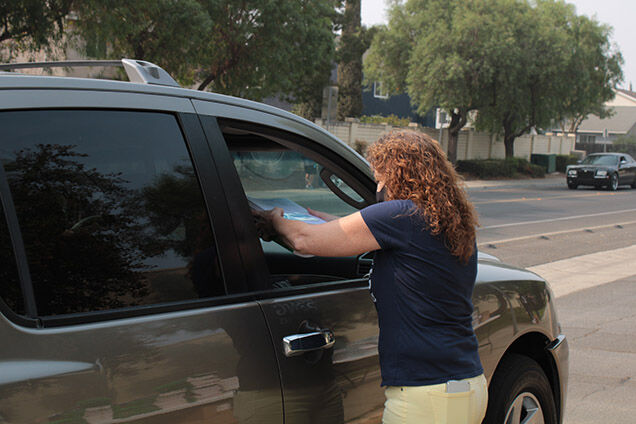 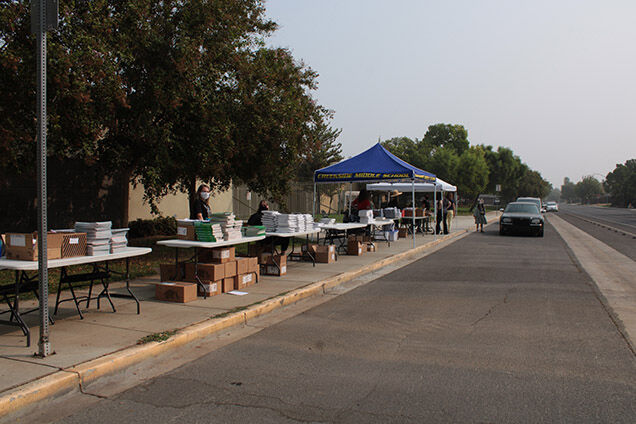 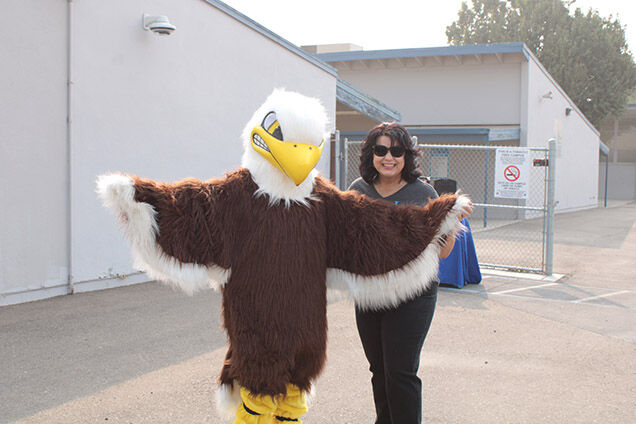 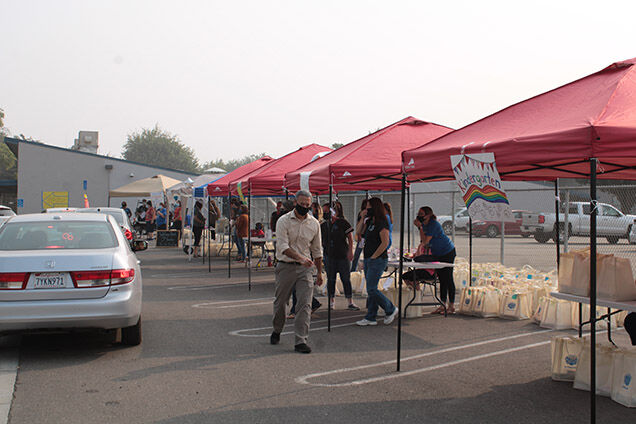 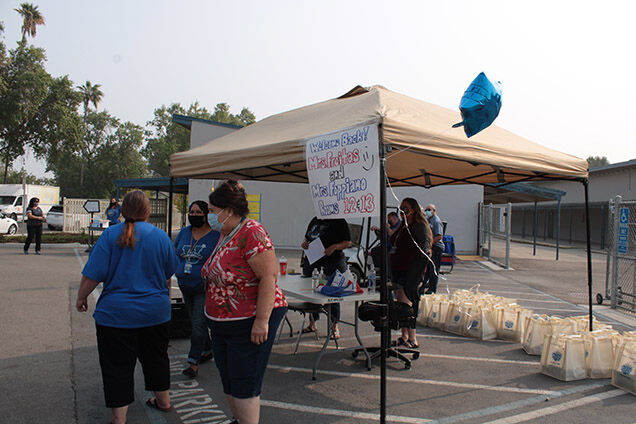 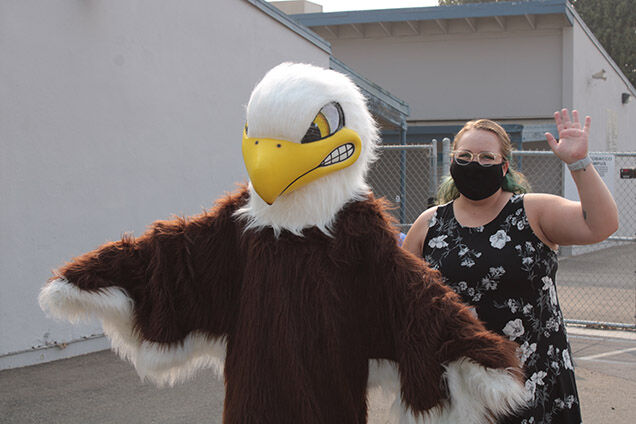 Elementary and middle school students picked up books and other materials to supplement distance learning on Sept. 14 and 15.

Each school hosted a drive-thru pick-up line typically organized by grade level. Families and teachers met face to face from a safe distance. The activity brought a sense of comfort and excitement to a school year that has mostly felt distant.

Schools played music, strung balloons, held signs, and greeted families with lots of smiles making another mundane drive-thru feel like a real back to school event.

Back to School Night was held virtually this year, too, since students aren’t allowed on campus yet.

Patterson High School has their Back to School event scheduled on Sept. 24, followed by Del Puerto High, and OVIS on Sept. 29. Links to these virtual events will be sent by the school staff.

PJUSD held a special School Board Meeting on Monday, Sept. 21.

At the regular meeting on Sept. 14 Superintendent Phil Alfano recommended to the Board that a waiver application be developed so that when it is safe to begin in-person classes for grades TK-sixth, the District would be prepared.

The Board met to review the application so that it could be filed with county and state officials for final approval.

The criteria to be met before a waiver is authorized was discussed by Alfano in a statement to PJUSD employees. “The revised criteria in the blueprint were announced in July and formally released on Aug. 28. It uses a four-tiered color-coded system that looks at daily new cases per 100,000 residents and the percentage of positive cases in each county. If a county has “moved down a tier” in one category, but not the other, it must remain in the higher tier.”

While the District awaits a decision on their waiver application, virtual classes will continue as expected.

There have been three instances of “uninvited guests”, as Superintendent Miranda called them in high school virtual classes. Investigations of the incidents confirmed that PJUSD students were not involved. Added security measures have been implemented to prevent future breaches of virtual classrooms.

Grief support resources are being made available to staff and students regarding the tragic deaths of Patterson High Seniors Ayana Guardado and Kaya Durazo, who were involved in a fatal traffic collision on Sept. 18.

The District sent a letter to students encouraging them to sign in to this Webex link for grief support:  https://pjusd.webex.com/pjusd/onstage/g.php?MTID=eab97bde551bc98e01839bcbd0504df4e

Additionally, the District listed these resources for students:

Acknowledging the uncommon stresses students are already experiencing due to the pandemic and distance learning, District staff hopes students know that they are not alone in their grief and that seeking support is imperative to their emotional wellbeing during this time.

A separate letter was sent to parents that included examples of some emotional responses to grief that their students may experience in response to the deaths of Guardado and Durazo. The letter encourages parents to participate in healthy communications with their students by speaking honestly and anticipating repeated questions and conversations as their students process the trauma.

Ryan Segoviano called the School Board meeting to order at 7 p.m. on Sept. 21. He recognized Patterson students who have tragically passed away this year.

Angel Jauregui, Ayana Guardado, and Kaya Durazo were memorialized during a moment of silence.

Segoviano addressed meeting attendees, “Our thoughts and prayers go out to the families of Angel, Kaya and Ayana. I know this is a big loss to our community. We all wish to express our condolences.”

Janet Lomeli and Corrin Rivera presented the Board members with a PREP Project update.

The PREP Project is a graduation requirement for all senior students. Work on the project takes place throughout the year, with students seeking a career mentor, shadowing the occupation they choose, and participating in a presentation at the end of the school year.

Rivera discussed some of the modifications that had been made to the project, including students’ presentation options at the end of the 2019-2020 school year, to make sure that all students could participate.

Phone interviews with students were conducted by staff members, projects were presented via video conferences, and all seniors were able to complete PREP requirements earning the necessary credits toward graduation.

Many of the modifications that were made to last year’s project will be carried over into this school year. Students will be encouraged to conduct phone interviews with their mentors rather than participating in the typical on-the-job internship.

Other changes include a more streamlined interview process, a paperless digital portfolio, and a standardized, guided questionnaire to use during presentations.

Lomeli and Rivera credited Brieanna Nanney with the development of the digitized PREP forms and stated their hope that the changes would continue and expand in the coming years.

Seniors will participate in their PREP instruction during their advisory classes on Wednesdays, beginning in about two weeks.

Superintendent Phil Alfano presented the Board with the waiver application that will be submitted to the County and State Department of Public Health. If approved, the waiver will allow the opening of TK-sixth grade classrooms when it is safe to do so.

Alfano told the Board members that he expects to receive a response to the waiver application in approximately two weeks. At that time, the waiver will either be approved or denied. If denied, CDPH will provide feedback as to why. If approved, the Board will need to approve the District’s reopening plan.

Discussing the health and safety measures the District has taken, Alfano said, “Whether we agree with the criteria or not, scientific data is not subjective.”

Superintendent Veronica Miranda presented the Board with the Learning Continuity Plan, which will take the place of the Local Control and Accountability Plan (LCAP) this year. The LCP was established by Senate Bill 98 and intended to balance the needs of students, parents, educators, and community members, as all are stakeholders in public education. The Board approved the LCP.