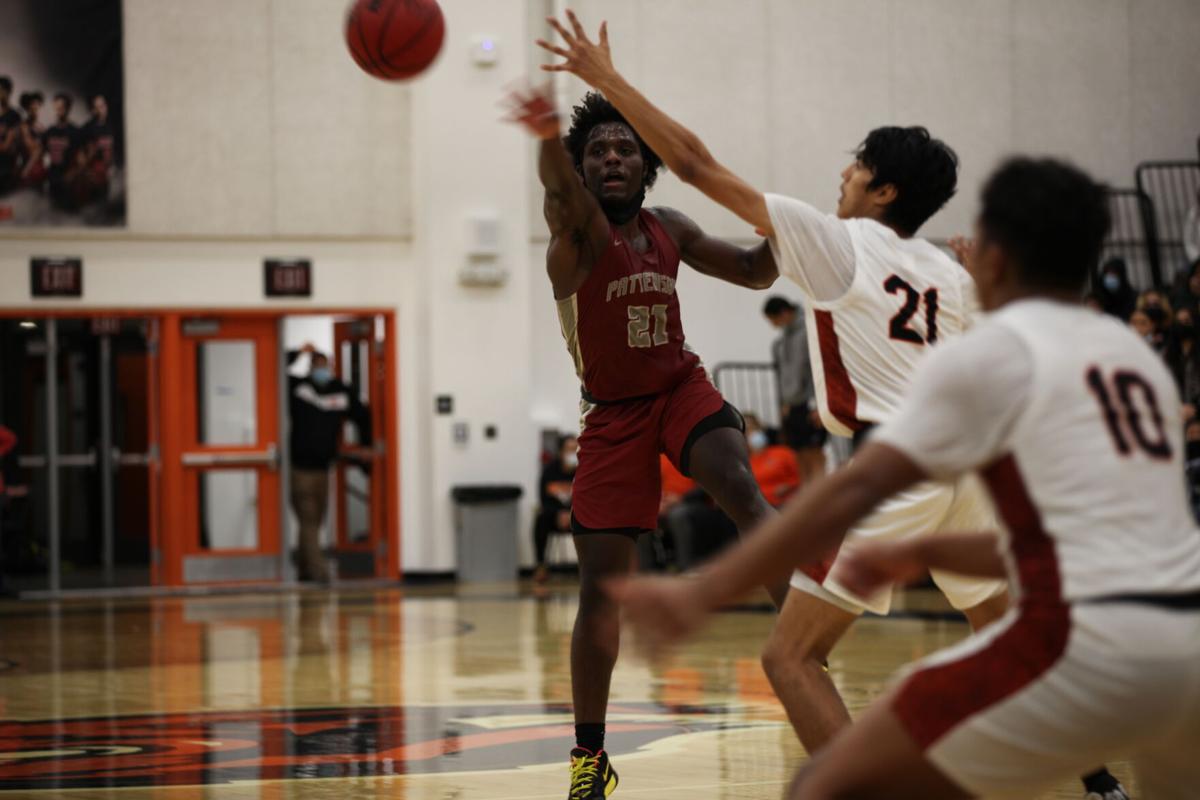 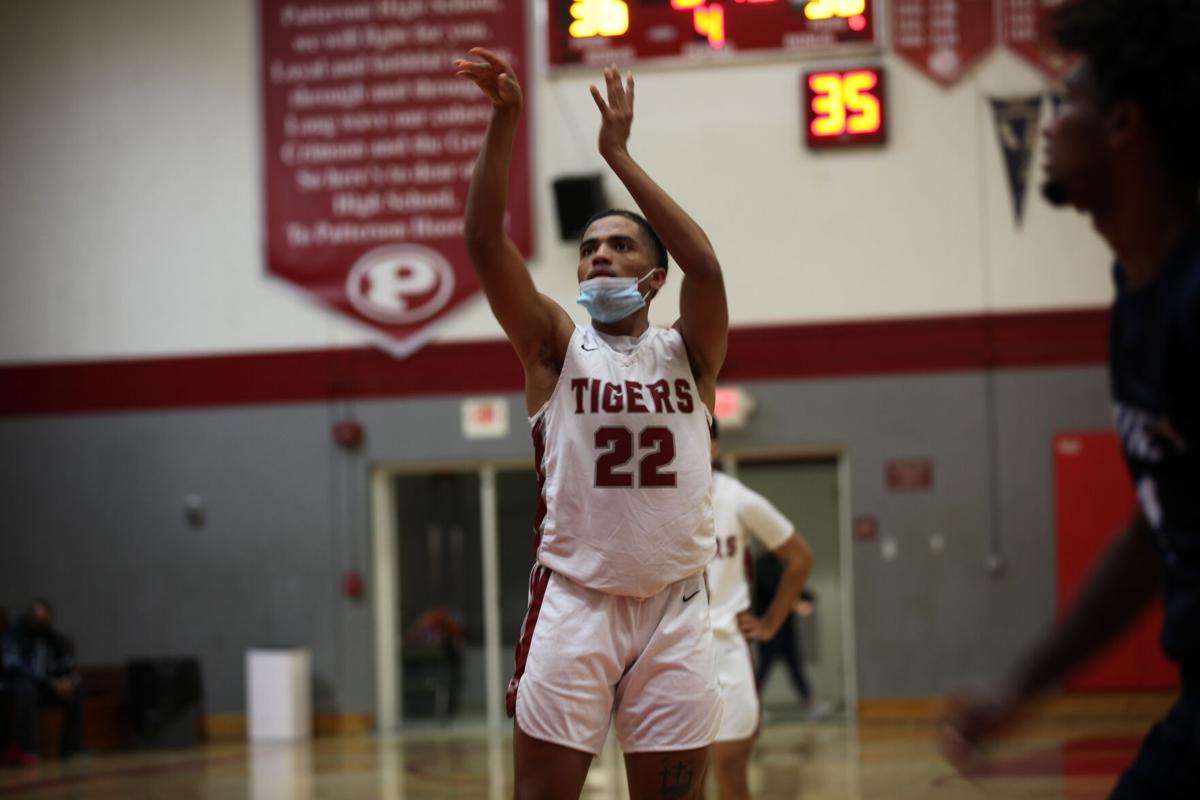 Patterson boys’ basketball had a rough night against Downey (67-45) last Wednesday as they played the first of a trio of games without sophomore starter David Nnaji due to health and safety protocols.

The three-ball got Patterson in trouble early, with Downey came out on fire and scored exclusively from three in the first quarter taking an eight-point lead, 21-12 at the end of the first quarter.

“We just didn’t come out focused and ready to play. We knew they were going to shoot threes and we didn’t sprint out [to the shooter] hard enough. We just keep letting teams shoot threes and hope that they miss, and we just must be better on defense. That’s something I have to work on and make sure guys are ready to get out there and defend a little bit better,” said Patterson boys’ basketball head coach Jason McCleery.

What was even worse, the Tigers had stretches of the game when it looked like they couldn’t buy a bucket. Patterson finished the game with their second worst field goal percentage (27 percent) and the team was did not make any three-pointers.

“We got a lot of shots that just didn’t fall for us, and we had free throws that we didn’t make. I thought there were sometimes we got the basket, and we didn’t get the call or the shot [to go in]. That happed about four time in the first four minutes, that could’ve been eight points. That would’ve allowed us to slow them down and set up our defense. There’s just some opportunities that when we get the ball inside, we have to finish,” said McCleery.

Due to the teams’ COVID outbreak the Downey game was the first piece of significant game action for most of the starters since the team’s comeback win over McNair on December 21.

“We were playing good before we got hit with the COVID pause. You hope the guys would bounce back right away but the pause definitely hurt us because we were playing some of our best basketball and we were ready to go to that tournament [Pleasant Grove] and win some games, unfortunately it didn’t work out for us. Now it’s time to get ready for league.”

The team would bounce back against Merced to the tune of a 60-46 victory, opening up the league season on the right foot. They came out hungry and ready holding Merced to only 9 points in the first quarter.

“That’s something we focused on. We watched Merced on film, and we know they play hard with intensity so we knew if we played relaxed, they would blow right by us and take balls from us. I think it was nice to see the starters, Precious [Nnaji] and Kwame [Appiah] carry that intensity right off the bat and it carried us all the way through. “

Merced’s defense had a hard time staying in front of Appiah. He was able to use his speed to constantly blow by defenders when he had the ball and when he off the ball they couldn’t stop him from cutting the basket for open layups, as he accounted for 10 of the teams’ 18 points in the first quarter.

“Every team is going to key in Precious and they’re going to slide guys his way and then Amari [Coley] came in and did the same as Kwame, he had 9 first half points. Those two guys getting to the basket the way they do it makes it so much easier for everyone else.”

Amari Coley has been making his mark in the rotation all year and Friday’s game against Merced he embodied what a sixth man should look like. Energy off the bench and being that spark plug that helps get everything going.

“He’s got a complete game and he’s young [Coley]. We’re constantly working with him, he’s strong and able to get his shot inside, along with a nice touch from the outside.”

The statewide COVID spike led to many games being rescheduled and Fridays’ game between Patterson and Merced was only the second boys’ basketball played in the Central California Conference, the only other game played was on January 3, Golden Valley def. Buhach Colony 58-46.

“The schools in Merced started school this week and a lot of them was hit with COVID. We start the following week, and we might hit with, hopefully we play Wednesday and Friday. We are doing all we can including playing with mask on.”

In their first game action since December 28, Patterson girls’ basketball team came out aggressive and put on a defensive clinic, without two key players in Tuesdays 44-27 win over El Capitan.

The Tigers held El Capitan to only 11 points through three quarters and took a huge lead going into the fourth quarter. The Gauchos responded by going to the full-court press and raising the level of physicality, to gain momentum and cut into the lead.

“They [El Capitan] were rough and there was a lot of pushing and shoving. We got a little bit tired at the end, but I told them this will be a big game, going into it without two of our starters that are key in bring the press. I think this will help the rest of the team to realize we’re pretty good too. It was a great win for us,” said Patterson assistant coach Tony Lomeli.

Tuesday’s game was the first game Lomeli took on head coaching duties since 2007 “I didn’t know what to expect. I actually had to call timeouts and had to turn in the lineups before the game.”

The team’s frontcourt continues to shine and be the identity of the team highlighted by another huge performance from Rayne Tago who finished the game with a double-double. She owned the paint scoring 19 points and she was snagging almost every rebound tallying 16 boards.

“She was a force inside and we haven’t even scratched the surface with her potential yet. She has so much power and finesse; she can be something.”

Virus issues have plagued the girls games just as much as the boys. Tuesday’s game was only the third CCC girls’ basketball game played (all featured El Capitan).

It continues to be a thorn as Patterson girls’ basketball next game was originally scheduled for tonight against Buhach Colony but virus issues within the Thunder girls’ basketball program postponed the game to January 19. The rescheduling of that game has the Tigers playing three games in three days.