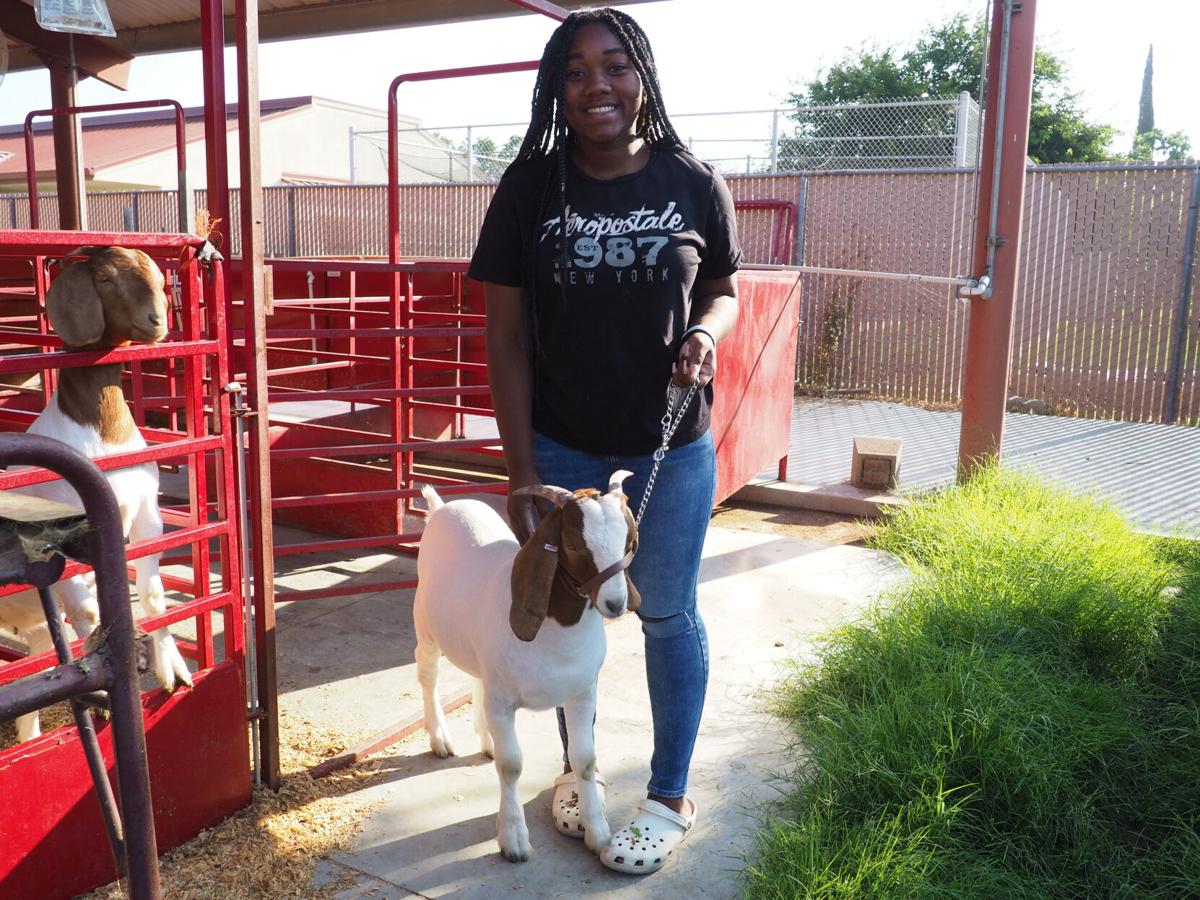 Sophomore student, Asia Taylor and her goat Clyde get ready for the Stanislaus County Fair while at the PHS Farm. Asia hopes that whoever buys Clyde will use him for good purposes and not for fighting. 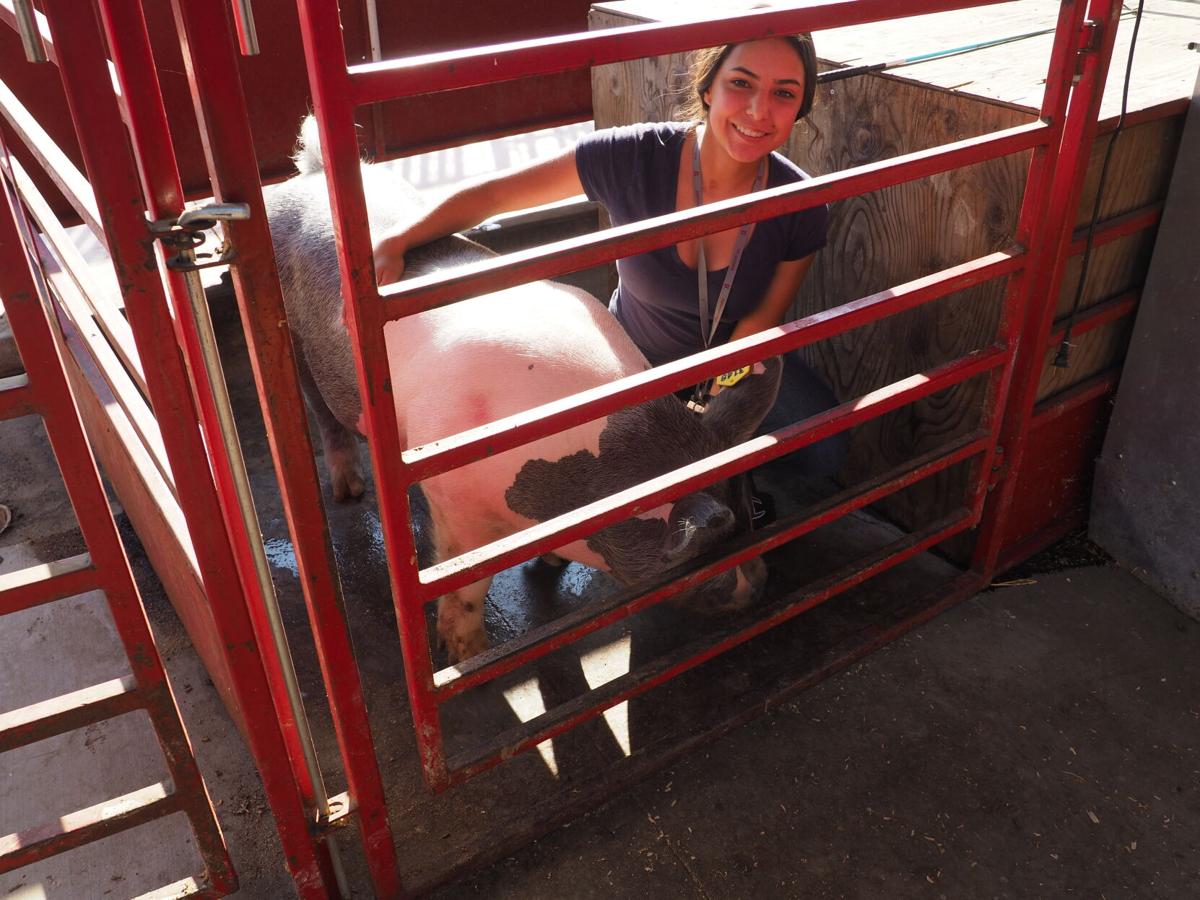 Senior, Natasha Carter poses with her pig Bubbles. This is Natasha’s 3rd year raising livestock for FFA and her 2nd year raising a pig. Natasha got involved with the program after her brother had shown livestock years prior. 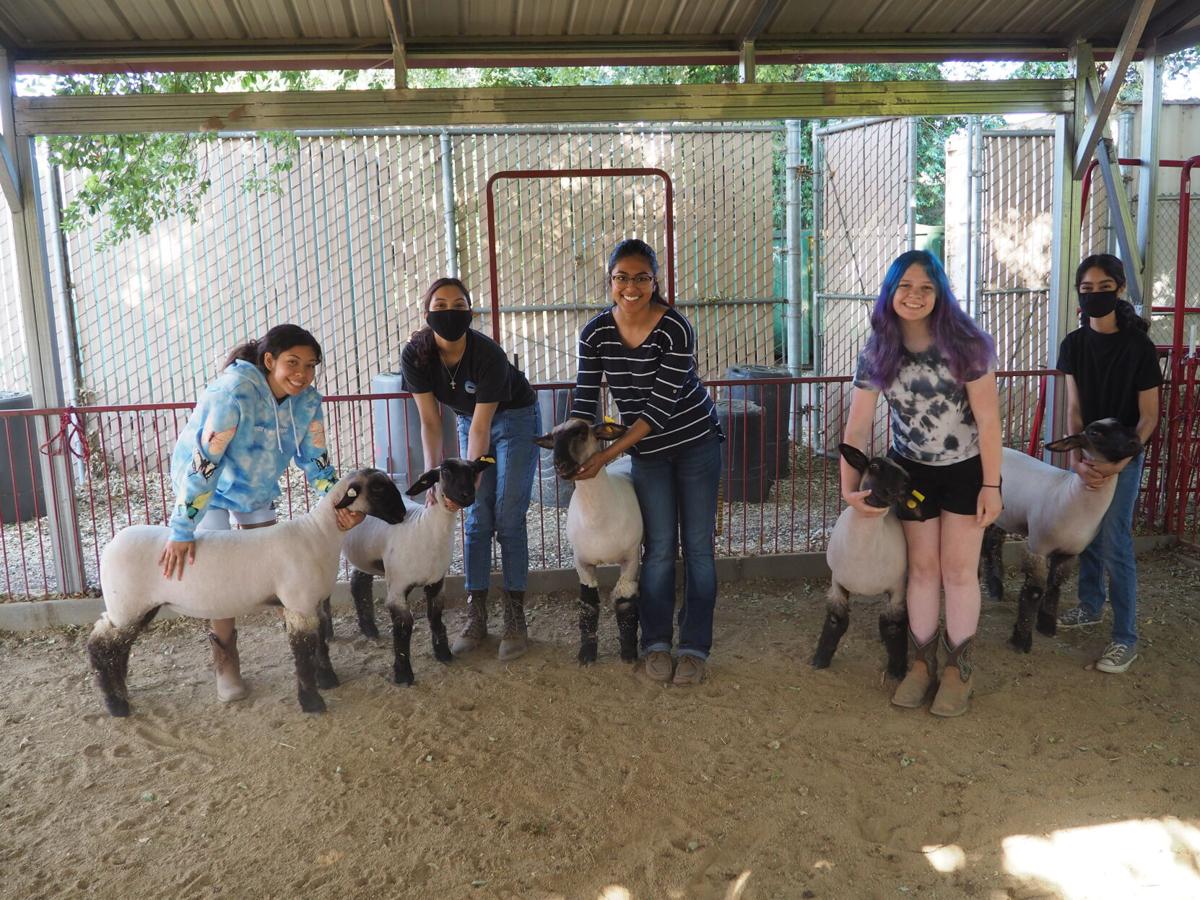 Left to Right: Luna Ortiz, Isabel Rodriguez, Angelica Hernandez, Abbie Todd and Briseida Nyunez pose with their sheep before getting ready to head to Turlock where they hope their animals sell at auction.

Sophomore student, Asia Taylor and her goat Clyde get ready for the Stanislaus County Fair while at the PHS Farm. Asia hopes that whoever buys Clyde will use him for good purposes and not for fighting.

Senior, Natasha Carter poses with her pig Bubbles. This is Natasha’s 3rd year raising livestock for FFA and her 2nd year raising a pig. Natasha got involved with the program after her brother had shown livestock years prior.

Left to Right: Luna Ortiz, Isabel Rodriguez, Angelica Hernandez, Abbie Todd and Briseida Nyunez pose with their sheep before getting ready to head to Turlock where they hope their animals sell at auction.

Patterson High School Future Farmers of America students are finally getting an opportunity to show off and sell their animals at the Stanislaus County Fair.

Last year, students were not able to participate at the fair since the pandemic caused the annual event to take a year off. This year, uncertainty surrounding the upcoming auctions and Covid-19 precautions looms over the student’s ability to catch the attention of potential buyers.

“Last year we were lucky enough to find buyers in the community,” said Animal Science and Biology Teacher at PHS, Karina Salomon. “...The [Stanislaus County Fair] is kinda spread out this year so it’s not the same as it usually is. We’re not really sure what to expect with the [Covid-19 measures].”

Salomon, who oversees the Swine projects along with Mr. Costa, said that the students are all very excited and eager to get back out there and show their animals. The students have been practicing showmanship at the Patterson High Farm and taking care of their animals getting them ready for the upcoming weeks starting on Thursday, July 17.

“The kids are really excited because last year they didn’t get a chance to show at the fair. This last week at the farm we were getting [the animals] ready to show at the fair. We gave the sheep haircuts and the pigs got haircuts this week too. We are basically getting them ready for the show. It’s really interesting to see these kids trying to clip them for the first time. It’s a great learning experience and everyone is having fun and is really excited.”

According to Salomon, the investment that the students make with their animals is a great learning experience and teaches them valuable life lessons such as financial accountability, time management, general animal health, wellness and nutrition. The program also attracts a wide variety of students from different backgrounds and experience levels, often piques the interest of their families as well, some of whom have younger siblings that also want to get involved in the program.

“One thing about the kids that show animals is that they are all super different,” said Salomon. “I have one student who is showing, that was a senior and she just graduated. She is actually going to school to work with animals and wants to be a Veterinarian. She raises rabbits and a pig so for her this is about getting more experience working with animals. Then I have another student who is going to be a Junior and she wants to go to [New York University]. She’s taking a bunch of AP classes and doesn’t come from an ag background at all but she heard about an opportunity to raise an animal and thought that it would be a fun experience.”

Salomon also said that she has a student who plays football that is raising a pig and his involvement caught on to the rest of the family. His younger sister who also attends PHS decided to raise a pig as well and the time they have spent with their animals caught the interest of their younger sister who is in elementary school.

“It’s a family thing. The whole family learns with the kids but the student is in charge. It’s their investment. They do everything from feed the animal to wash the animal and their pens, and they are constantly working. It’s not an easy thing, it takes a lot of time but they learn a lot. It’s a really cool project.”

On Tuesday morning, students at the PHS farm were readying their animals for the fair. A truck was being loaded with supplies to be taken to the fairgrounds as students were putting the finishing touches on their animals. A group of the sheep students who were led by PHS Teacher Keri Barnes were practicing handling their animals and showmanship before they posed for pictures.

“After high school I want to pursue a career field in veterinary and I knew in FFA I was able to raise livestock and I knew it would be a great foot in the door for me,” said student Angelica Hernandez.

Another student, Abbie Todd, talked about how her sister used to raise pigs when she attended PHS and she always thought about following in her footsteps but once she got to PHS she decided to take a different path and work with sheep instead.

The money that is invested in these animals all comes out of the student’s pocket. The amount spent varies but based on a series of letters from students to potential buyers, the average cost to maintain the animals seems to range around $1000.

“Our hope is that our kids always make some profit but we never know what they are going to go for at the fair because it’s an auction, said Salomon.”

For this reason, Salomon hopes to secure buyers or donations to students from the community before they actually get to the fair. Last year community members ranging from Turlock to Patterson were able to make donations and purchase portions of the animals for meat.

“If you buy an animal it gets harvested and you can keep that meat for yourself.”

Swine projects will be auctioned at the Stanislaus County Fair on July 17 and 18 at 9:00 a.m.. Sheep and goat projects will start on July 24 at 9:00 a.m.. Community members that are interested in purchasing animals or portions of an animal for meat can make offers directly anytime. For more information please contact Karina Salomon at ksalomon@patterson.k12.ca.us and to keep up with events you can follow @patterson.ffa on Instagram.