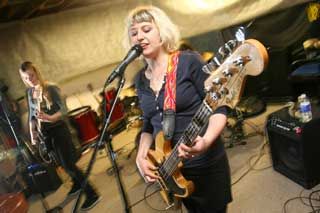 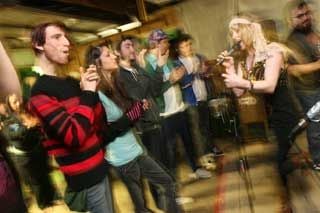 But on Saturday, the groups were back to being garage bands for a night, playing at the rural home of Patterson residents Frank Montes and Neil Vento on rural Ash Avenue as part of the 15-band Hellapop festival.

“I think this is pretty awesome,” said Zach Burba, guitarist for Iji.

TeamAWESOME! member Anthea Osguthorpe said she likes playing at such all-age venues because people go there to hear the music, not just to go out to a club to get a drink.

Diversity was evident Saturday, with performers ranging from the ukulele and vocal minimalist pop of Modesto-based Charlie Don’t Surf to the aggressive rock sounds of San Francisco’s Hey Three Eyes.

“I like that there’s more diversified kinds of music coming together,” said Nik Schapansky of the Visalia-based rock band Justin Stine and the Trees.

Schapansky said many of the bands in his hometown are of the punk variety, and it was good to hear bands performing different genres, such as the Modesto jazz-folk group Shadow Puppet Theatre.

Montes and Vento, who also belong to the bands Frankie and the Werewolves and the Panduhs, have hosted close to four shows a year at the home they rent, aka Panduh Studios, during the past couple years. The biggest attraction is always the annual Frankenfest on Halloween, Montes explained.

He said the venue aims to bring various young music lovers together, providing something local for young people to do.

“We try to keep kids off of the drugs and stuff and off the street,” Montes said.

Access to alcohol is not allowed for anyone younger than 21 at the all-ages show.

Cardenas said all beer at the home was kept behind closed doors and available only for those older than 21. Montes said a few teens might try to sneak booze into the event, but rowdy behavior is not tolerated.

Despite the all-ages label, a few of the bands who performed Saturday likely would have Parental Advisory labels placed on their music if they were signed to major labels, though Cardenas said one of the bands was swearing a bit more than usual.

Many Patterson teens who came to the event said it was nice to have a local event catered to young people.

“Usually, it’s one of the highlights of the year,” Marin said of the music events. “It’s a fun experience.”

Montes and Vento might move soon, so Saturday’s show could be the last on Ash Avenue. Another Frankenfest is planned for October, but a venue has yet to be determined.

To reach Jonathan Partridge at the Irrigator, call 892-6187 or e-mail him at jonathan@pattersonirrigator.com