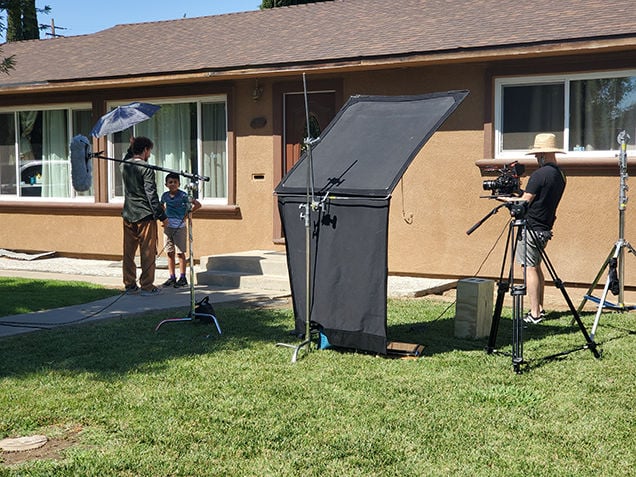 Ross and Avina wait on their marks while camera equipment is set up. 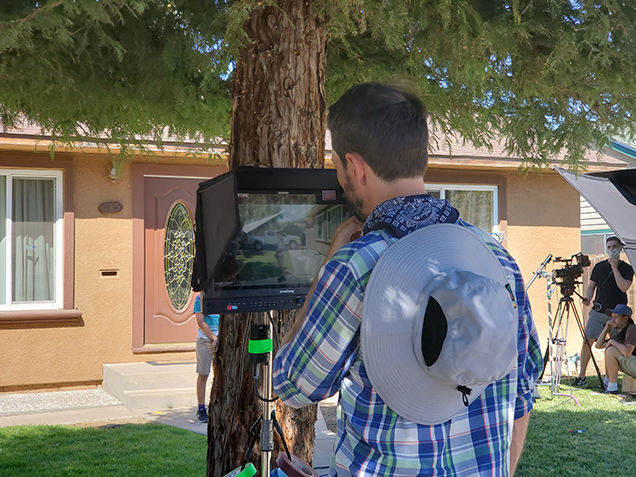 Director Gabriel Oliva watches the scene on a monitor. 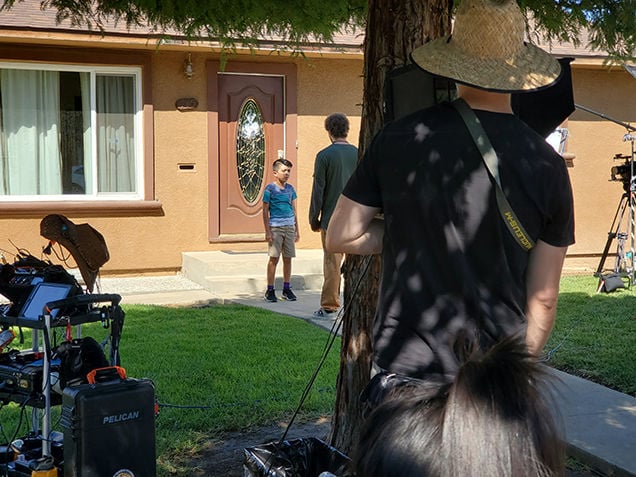 Avina and Ross waiting to film a scene. 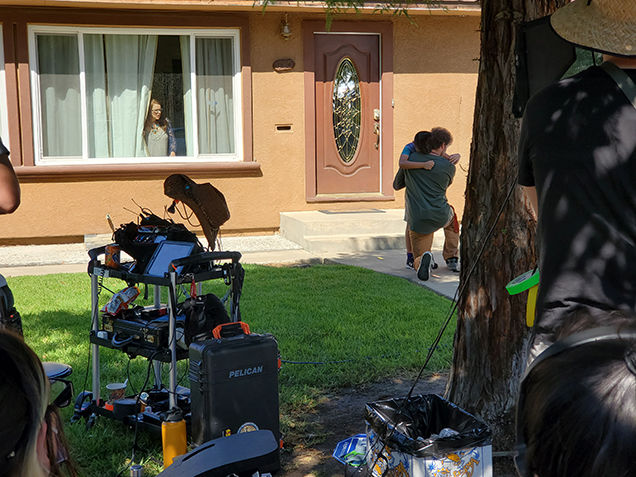 Travis Ross and Xavier Avina embrace during an emotional scene, an actress looks out the window. 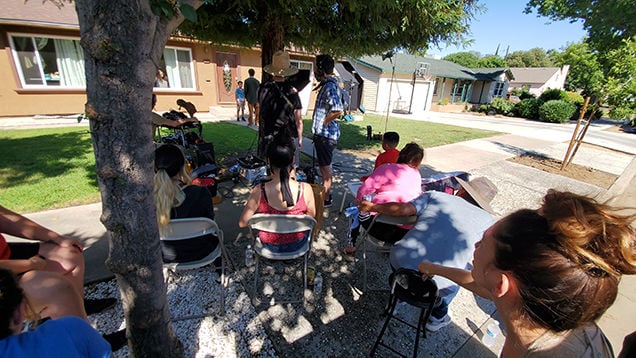 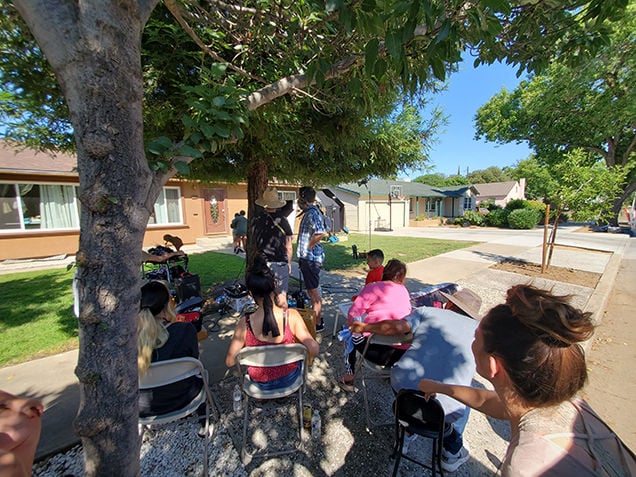 Ross and Avina wait on their marks while camera equipment is set up.

Director Gabriel Oliva watches the scene on a monitor.

Avina and Ross waiting to film a scene.

Travis Ross and Xavier Avina embrace during an emotional scene, an actress looks out the window.

“Unc” is a story about a man who is thrust into parenthood after a traumatic experience leaves a boy in the care of his uncle, a man who is ill-prepared to be a father figure.

The Irrigator got a behind the scenes experience while filming took place at Avina’s maternal grandparents’ house in Patterson.

Avina’s family members joined the production crew huddled in the shade of a single tree while he and “Unc” writer and starring actor Travis Ross suffered the 100° heat in the sun.

Avina and Ross ran their lines -- which is just a fancy way of saying they were practicing -- while the audio and video crews set up their equipment.

After grooming the boom mic with a hairbrush and repositioning the cameras to accommodate the afternoon sun, the scene was set.

Susena Ross, Avina’s mother, looked on while his grandmother used a production headset to listen to her grandson act in his first feature film.

With tears of pride in her eyes and her smiling husband intently watching over her shoulder, the scene was called.

Quiet cheers of a job well done encouraging the young star resounded from those gathered to watch.

Susena notes her increased respect for those in the film industry after experiencing everything that goes into creating a movie. She is proud of her son and excited for him to have this opportunity.

This is Avina’s first experience acting, and Ross extols his ability, obviously impressed by his ability and his dedication. For this emotional scene, Avina has his lines memorized, and he quickly follows the director’s guidance.

“Unc” was written by Travis Ross and director Gabriel Oliva.

Although the storyline doesn’t follow Ross’ real-life experiences exactly, he notes there are parallels between his character’s life and the life he could be living.

As a teenager and self-proclaimed “skater punk,” Ross had multiple run-ins with Gustine police. After being arrested and held at Gustine jail as a juvenile, Ross decided he needed to change his behavior to change his life.

Travis Ross is not just Avina’s uncle on camera. He is the boy’s real-life uncle.

Ross and his brother Troy, Avina’s dad, were raised by their single mother in Gustine.

While their mother worked long hours at a diner to keep them fed and sheltered, the boys spent much of their time watching television.

Being economically disadvantaged, mostly unsupervised, and having no father or father figure are often building blocks that lead to higher rates of school dropout, drug and alcohol abuse and even jail.

Lacking role models in his real-life, Ross looked to his favorite movie and television characters for inspiration.

After graduating from Gustine High School, Ross went on to earn his Associates degree from Modesto Junior College and later graduated with a business degree from California State University Stanislaus.

To allow himself more freedom to chase stardom, Ross put his business degree to use and started his own produce company. Superstar Produce is located in Turlock and specializes in sweet potatoes grown in Livingston, CA. Owning the produce company has given him more time and opportunity to travel and create.

Ross worked as the host of a movie review show on My58 television station. He also produced his own movie reviews on YouTube before deciding to move to Los Angeles to make his dreams come true.

Adding to his many commercial, modeling, show, and movie credits, such as Hemingway & Gellhorn starring Nicole Kidman and Clive Owen to his name, Ross also runs Gray Matter Films with his business partner, Eric Wann. Wann is listed as the cinematographer for “Unc.”

Gray Matter Films is the production company responsible for “Rx,” an acclaimed short film about opioid addiction currently available to stream through Amazon. “Rx” was written by Ross and Wann and was inspired by Ross’ own experience with opioid use while recovering from shoulder surgery.

“Unc” is expected to be released and also available on Amazon in 2021.