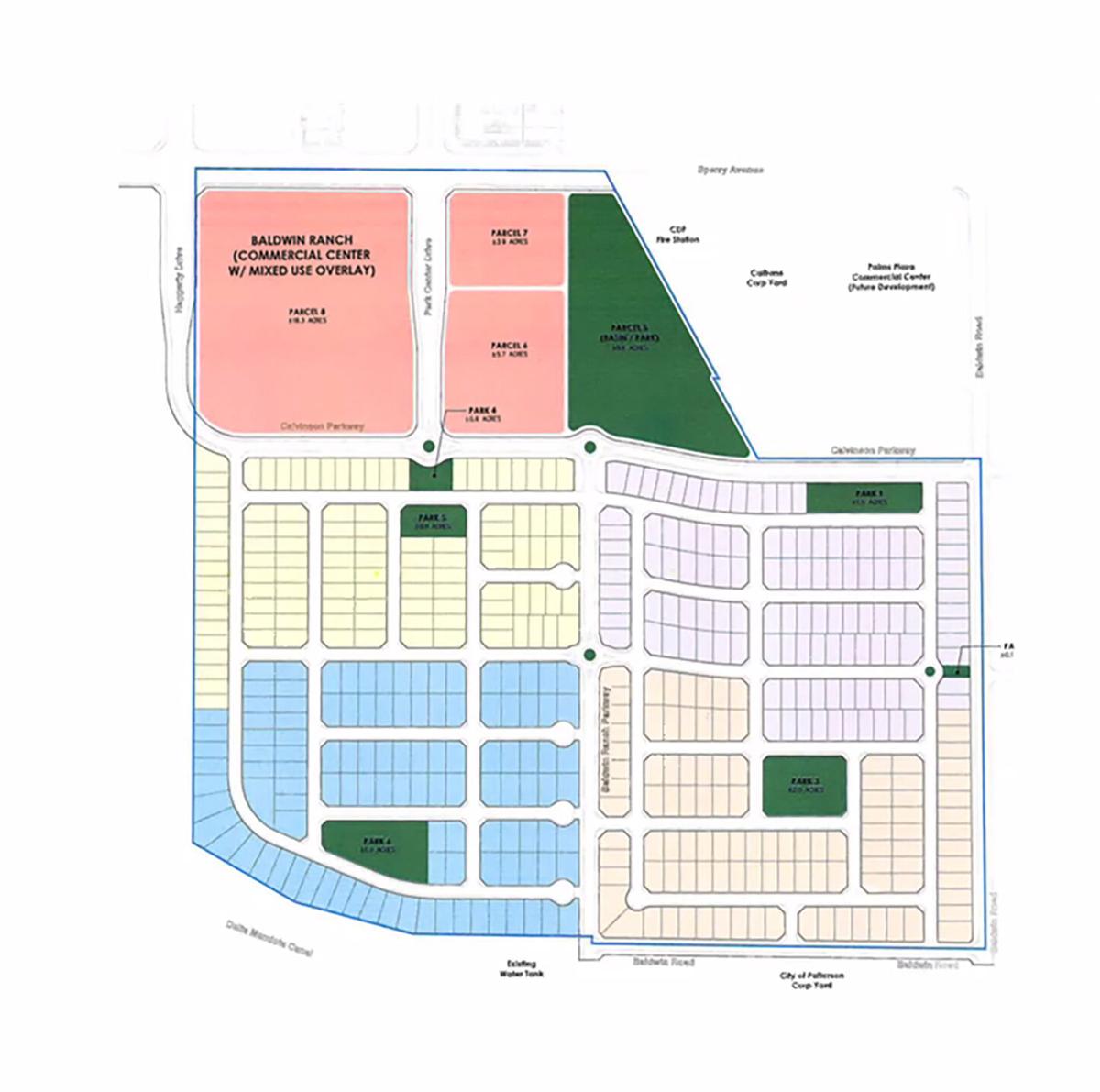 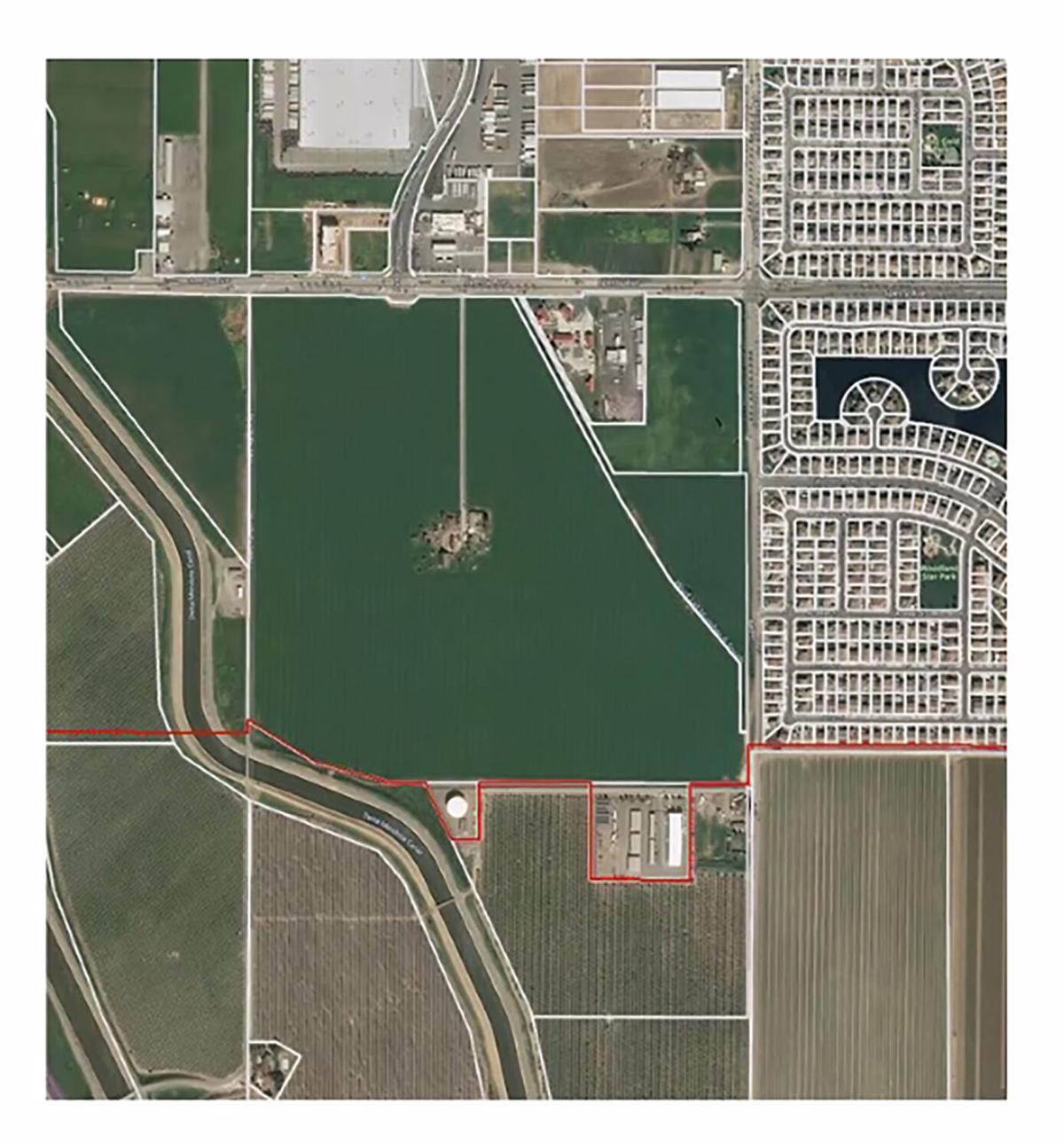 A council with two members slated to exit office in a matter of weeks unanimously approved an amendment to the city’s general plan that will allow the rezoning of 131.4 acres of land located south of Sperry Avenue and west of Baldwin Road. The amendment passed despite a more than three hour public comment period from residents, county officials and local school officials asking for a delay.

The applicant, Baldwin Ranch Development Co. LLC, proposed to redesignate 32.9 acres of the site adjacent to Sperry Avenue to a General Commercial Zone. The remaining 98.5 acres on the southern side of the project area would be changed to Medium Density Residential. All zones were previously earmarked for Light Industrial previous to this proposed change.

The changes would make way for a total of approximately 449 single-family housing lots, internal roadways, space for approximately 300,000 square feet of commercial development, four parks and a storm drain basin.

Resident Sean Hansen asked, “Why is this being fast-tracked before the new council is in? It doesn’t look good. The county and the school district are asking for a delay.” He also shared his concerns over the fees that the city may be responsible for paying.

PJUSD Assistant Superintendent Jeff Menge asked for the vote to be rescheduled, “We’re going to have to compare notes,” (with the developer), “they’ve figured out how to streamline the permit process.” He confirmed that the district has previously had difficulty keeping projects on schedule due to delays from the city.

Joseph Hollowell, the developer applicant, repeatedly commented that he has a good relationship with the district and affirmed that all district fees would be paid.

“We are absolutely committed to working with the school district. He told the council that two potential sites had been offered to the district to build a new school but, it is unknown if those sites are sufficient as they have not been evaluated by the district. “Thirty days will allow a conversation to understand the full impact on the district,” Menge told the council.

Director of Community Development, David James, previously told the Planning Commission, “The applicant is in robust communication with the school district.” He further remarked, “Just trying to look at where would be the most appropriate place to site an elementary school. That is something that is being discussed and worked about between the district and the applicant. The school district has been very much a part of the conversation as this project moves forward.”

School Board President Michele Bays questioned the statement at the board meeting on Nov. 16. “Did I miss something?” she asked.

Menge confirmed that the district had, “received one e-mail from the developer, if that’s robust communication.” “There is maybe some manipulation,” Bays stated her concern during Monday’s school board meeting but was unclear who or what was being manipulated.

Due to an agreement between the county and city, if the property is rezoned, the city will be responsible for repaying the county for the costs the county incurred developing the area for industrial use.

City attorney Nubia Goldstein acknowledged the penalties expressly set out in the repayment obligation. She stated that the developer has already agreed to indemnify the city by covering the approximate $20 million price tag.

DeMartini emphatically expressed the county’s opposition to the project. “There was no negotiation with the county at all. It was sneaked through.” He stated accusatorily, “I know the developers never pay for anything in Patterson.” “

Mendez said, “We have a good working relationship with City Manager Ken Irwin,” and while his office has had conversations about this project, he requested a continuance. “Thirty days is an adequate time frame with the holidays.”

Leamon spoke to the 50 percent increase in traffic that the westside has experienced from 2017-2020. The increase in traffic could cause the county to reconsider how Measure L funds are used in the future and agreed that the delay would give more opportunity to consider the project and the impact on public roads.

Irwin responded to resident Mia Mendes’ concerns about public safety. “The city is well-staffed by the sheriff.” The public safety fee schedule is already in place. Fees will be paid as part of the development agreement.

Patterson Police Services Chief Joshua Clayton also said, “The city has always been forward-looking,” in regard to staffing needs. “Patterson is in a much better situation than some of its sister cities,” that have contracts with the sheriff’s department.

In the end, the council disregarded all requests and concerns from constituents and passed the amended resolution by five votes.

The council also adopted resolution number 2020-50, recommending approval of tentative cancellation of Williamson Act Contract. There were no public comments.

The city attorney provided direction to the council regarding establishing contribution limits for city candidates. Goldstein explained that the city could set its own limits but would then be responsible for enforcing those limits. Alternatively, the city could choose not to take any action defaulting to state guidelines, which would prevent any added expenses or potential oversight responsibilities.

The council agreed to default to state limits.

Mayor Deborah Novelli and Mayor Pro Tem Dominic Farinha thanked the many individuals who applied for the open positions on Patterson’s Planning Commission and encouraged them to continue to be involved in the community. Diana Anderson and Ron West were appointed for a term of two years, beginning February 2020 through 2022.