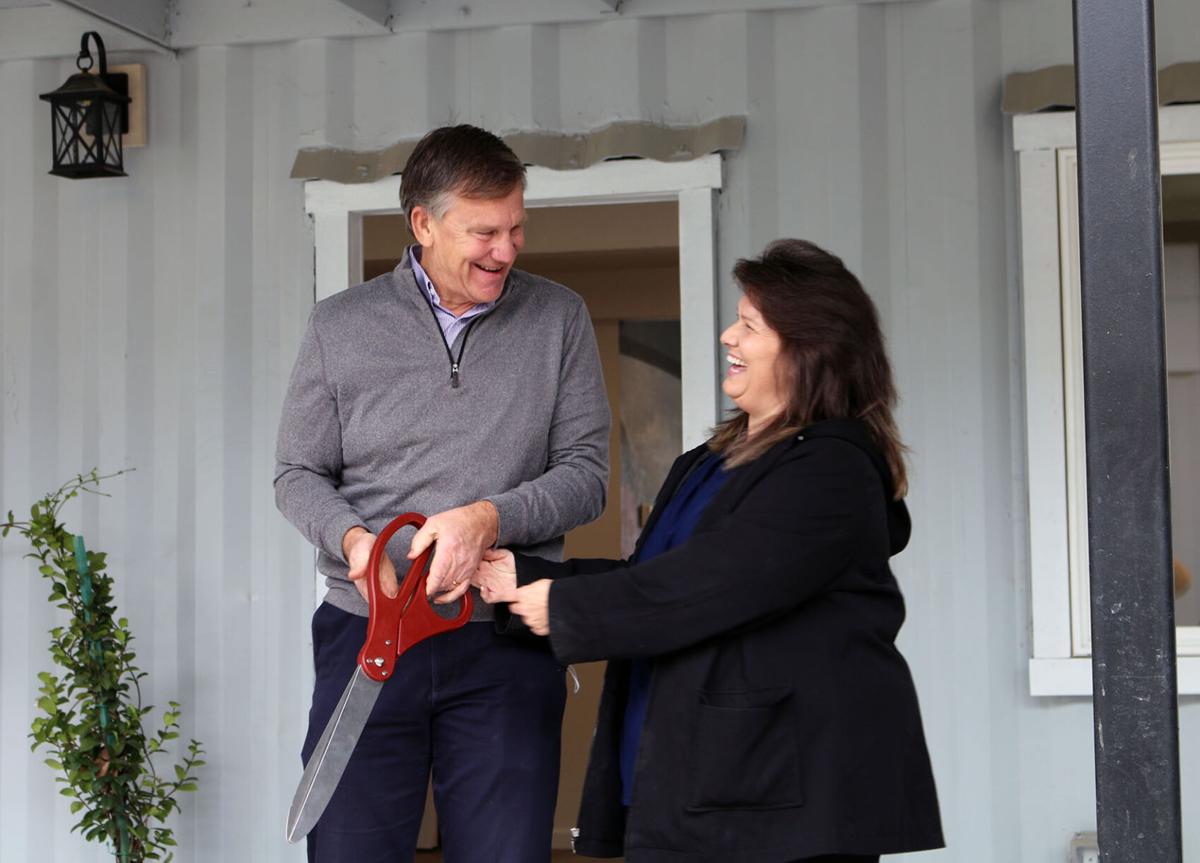 Civil Engineer Brad Hawn, who provided the drawings for the facility, and Jennifer Zambrano, the first female graduate of the ReStart Program from Patterson, cut the ribbon during the ceremony at Naomi's House on Tuesday, Nov. 17. 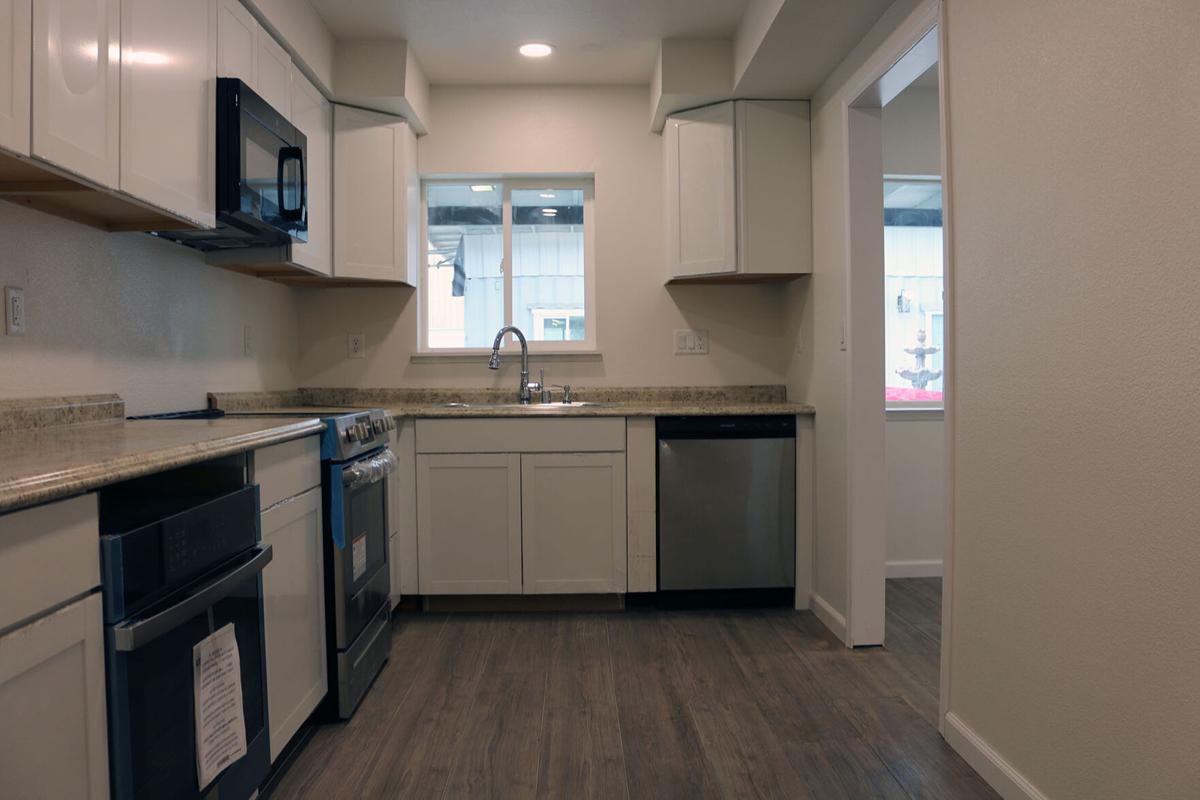 The kitchen in the office / community building at the Naomi's House facility, taken during the ribbon cutting event on Tuesday, Nov. 17. 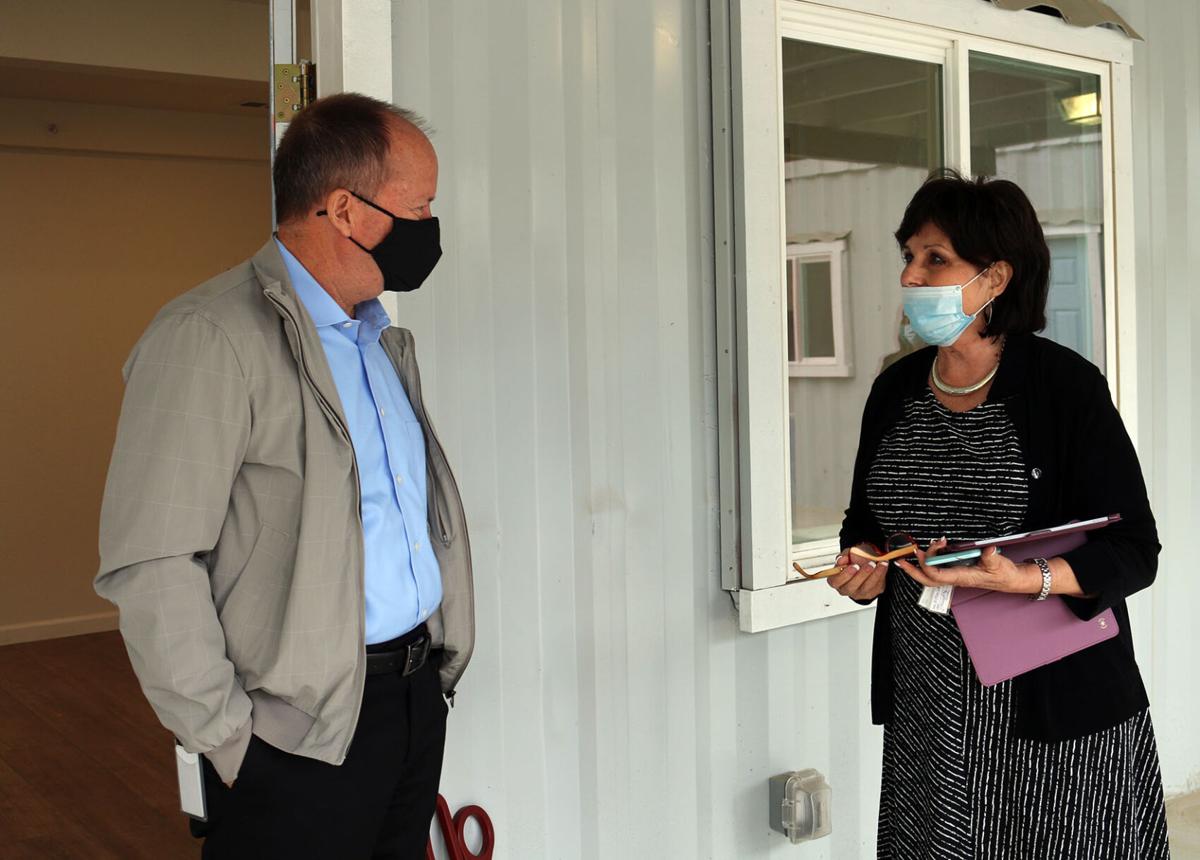 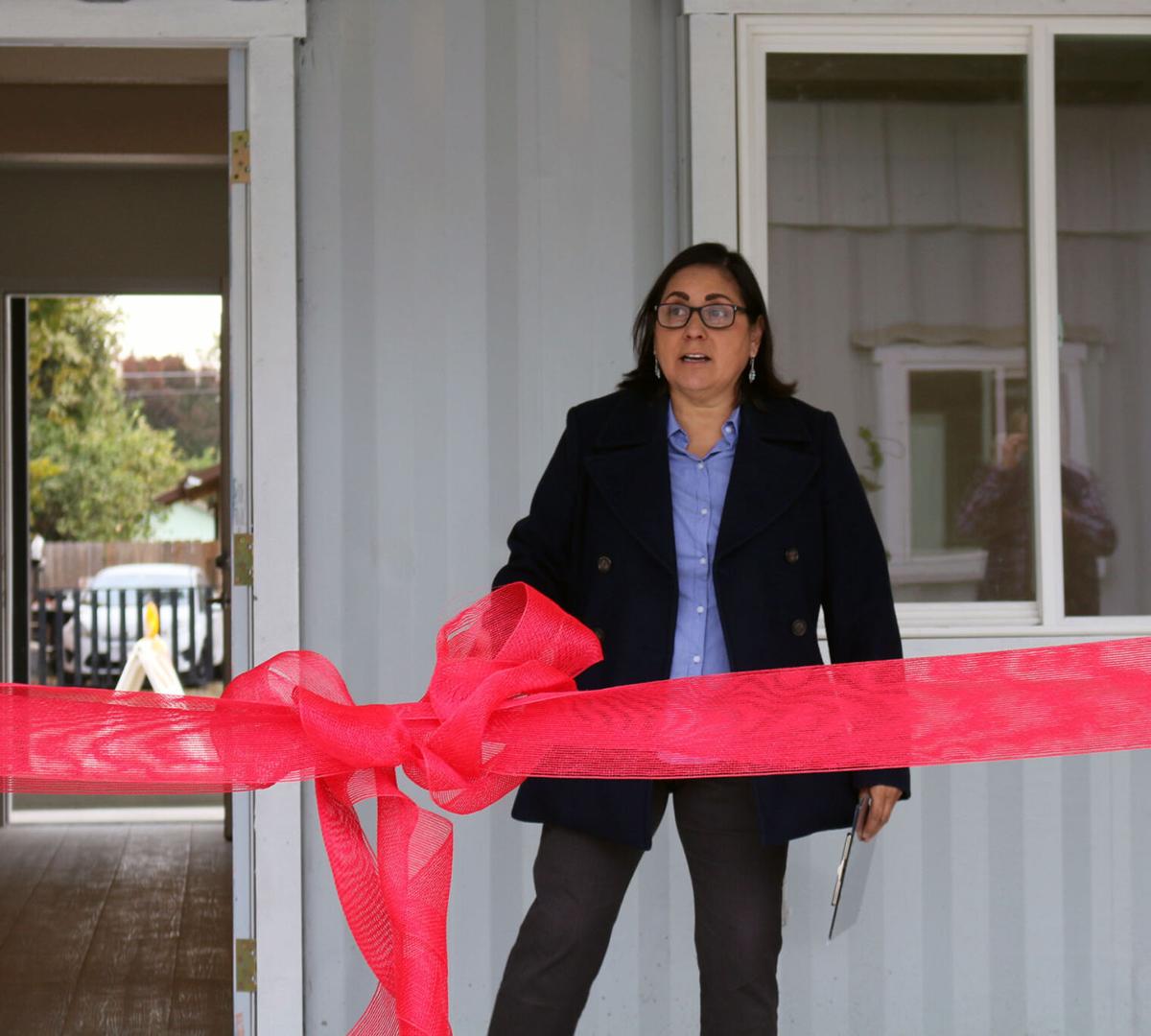 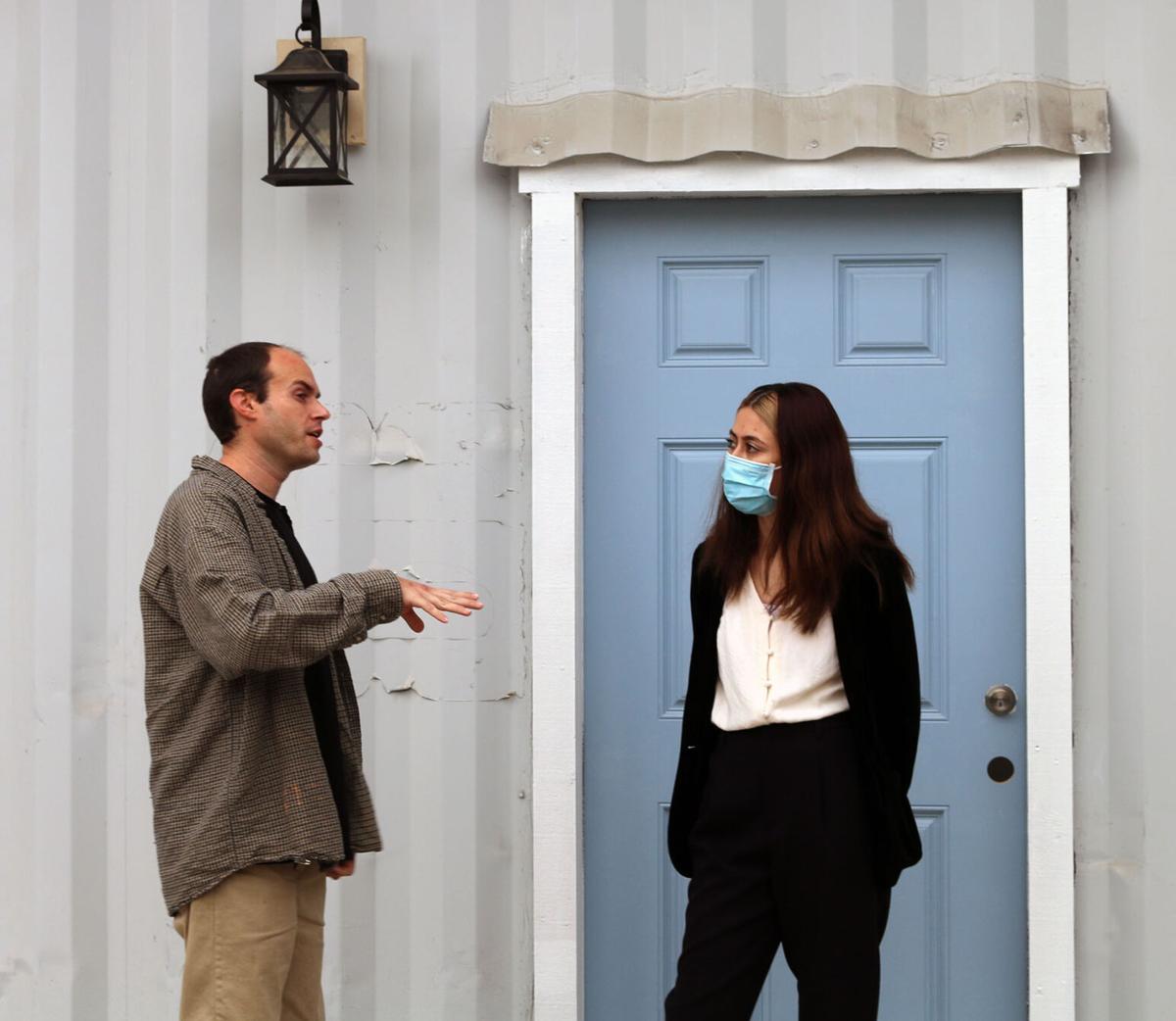 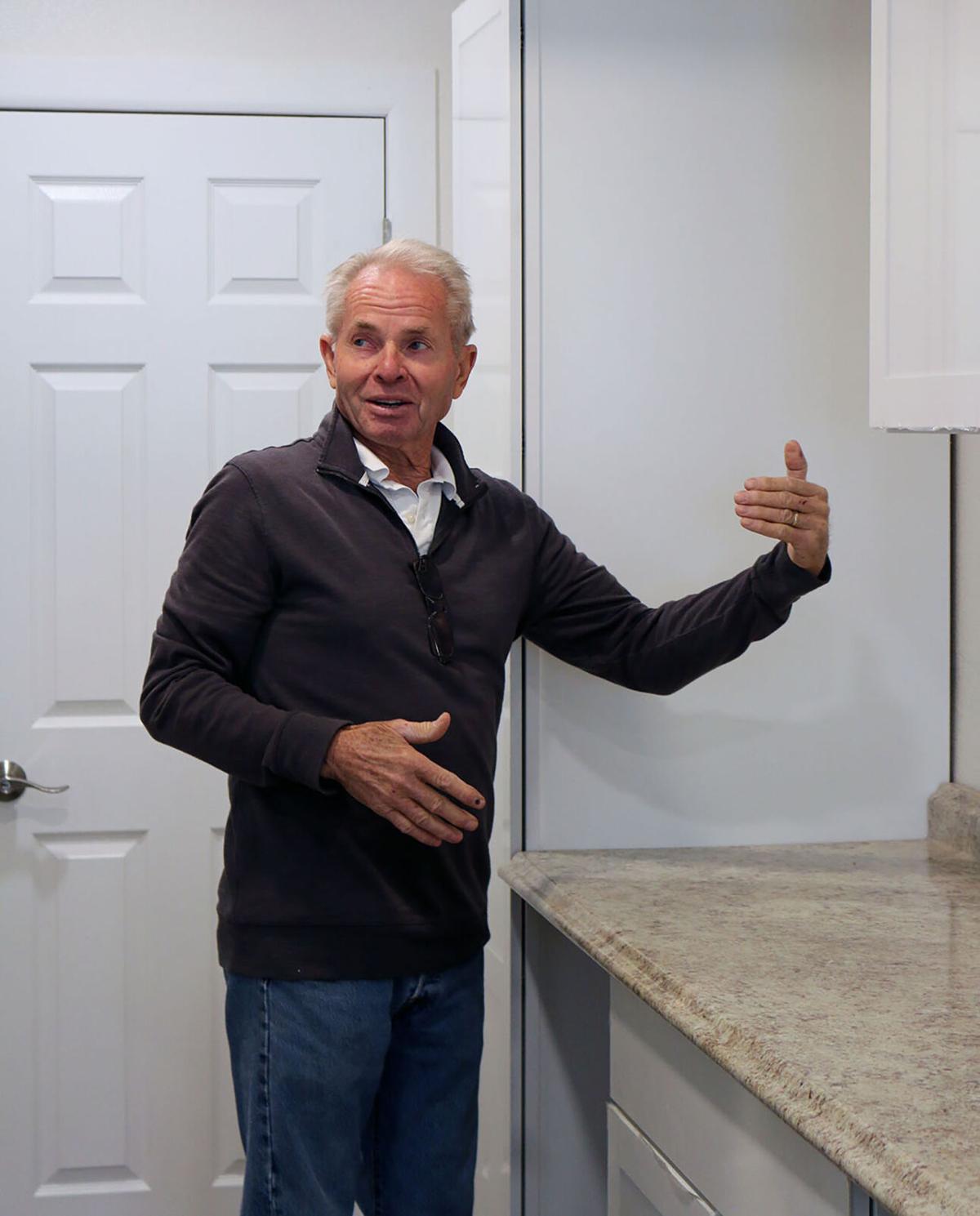 Bill Goss, the contractor who has worked for most of 2020 taking the Naomi's House facility from a vision of recycled shipping containers to finished buildings.

Civil Engineer Brad Hawn, who provided the drawings for the facility, and Jennifer Zambrano, the first female graduate of the ReStart Program from Patterson, cut the ribbon during the ceremony at Naomi's House on Tuesday, Nov. 17.

The kitchen in the office / community building at the Naomi's House facility, taken during the ribbon cutting event on Tuesday, Nov. 17.

Bill Goss, the contractor who has worked for most of 2020 taking the Naomi's House facility from a vision of recycled shipping containers to finished buildings.

An appropriately small group gathered at the Naomi’s House facility for a ribbon cutting ceremony on the morning of Tuesday, Nov. 17. In accordance with the county’s current purple status, the event was held outside, in the courtyard of the new facility.

In welcoming the group, Raya said that the facility will bring new hope to the lives of local homeless women, and an opportunity for them to transform their lives. “It took a lot of people that believed in and supported the project,” she said, “and a lot of prayers to make this day happen.”

Naomi’s House, Dr. Boyer said, will be a place where women can “learn how to live in a different way; how to transform their lives,” and “change their futures.”

She noted that the facility is “not 100 percent completed. Covid has created many challenges for us.” The group is overcoming those challenges, she said, thanks to assistance from Stanislaus County, which has provided funding for the facility.

Once funding and plans were in place, someone was needed to oversee construction of the project. “Bill Goss came from retirement to volunteer to manage this project,” Boyer said, “and thankfully, he didn’t know what he was getting into,” she quipped. Goss has worked tirelessly on this project for most of this year, and the Goss family, including grandchildren and great-grands, were all on hand to congratulate him on the success of the project.

Boyer named the City of Patterson as “our best local partner and friend,” mentioning Vice Mayor Dominic Farinha and Mayor Deborah Novelli, and acknowledging the Public Works employees who did some of the early site work. City Manager Ken Irwin, she added, “has been wonderful.”

Boyer acknowledged former ReStart students Gene Martinez and Corey Bernard, who were also in attendance. Boyer described Martinez as “an amazing man,” with “a work ethic that’s over-the-top.” She added, “we’re so proud of him.”

Bernard, also a former student, finished program with honors, Boyer said, both “in personal change and personal development work,” Boyer said. Bernard has been responsible for laying the flooring in all of the buildings at the facility.

ReStart graduate Jennifer Zambrano, the first female ReStart program graduate, was also on hand. She now works for the Postal Service, and aspires to achieve more. Zambrano’s story is “an inspiration,” Boyer said. “We are so proud of her.”

Introducing Zambrano, Boyer described her as “our pride and joy,” and “the first of many.” Zambrano attended the event in order to provide encouragement to the women who will soon be starting the program.

Zambrano told the group that she’s been clean and sober for two years and two months. “It was quite a journey,” she said. “It wasn’t an easy journey, but I got through it. Today,” she added, “I’m standing on my own. I have my own home, I have a job, and I have reconnected with my father after 13 years.”

She had hit rock bottom two-and-a-half years ago, she said, and met Cambridge Director Rosie Raya in the park. She had just learned she had early stage ovarian cancer. She didn’t know what to do, she said. Rosie listened, and told her about the ReStart program. Zambrano had surgery, and stayed with her daughters for 6 weeks.

Then she decided it was time to come back to H.O.S.T. House. She described that day as “the first day of the rest of my life.”

“I’m not gonna tell you it was easy,” she said. She was the only female student, but the other ReStart students “had my back,” supporting her whenever she was struggling. Six months after starting the program, she got a job, got a home and reconciled with her father.

And then the coronavirus hit. Her father invited her to “come on home.” She got her own place. She has just finished taking the dispatcher’s exam, as well as the correctional officer’s exam. “I did it,” she said, “and I wouldn’t have done it without this program. This program saved my life,” she said, to a round of applause.

Boyer held up Zambrano’s story as motivation for the ongoing work that Cambridge Academies does. It can be challenging to work with people whose lives could be changed for the better but may not want the help, she said. “These stories are the ones that get us to work, and get us to keep pushing, because we are here to help others. We have been blessed with a lot. With family; with a roof over our heads. These ladies have disconnected with family; they’ve lost their children. They need help. And that’s what we’re here to do,” Boyer said.

She then called up Zambrano and Brad Hawn, the civil engineer who designed the facility, to cut the ribbon.

As the crowd mingled after the ceremony, Regina and Larry Reid, members of the Low Down Car Club of Patterson, arrived with 25 pillows and some sheets, putting the facility another step closer to opening.