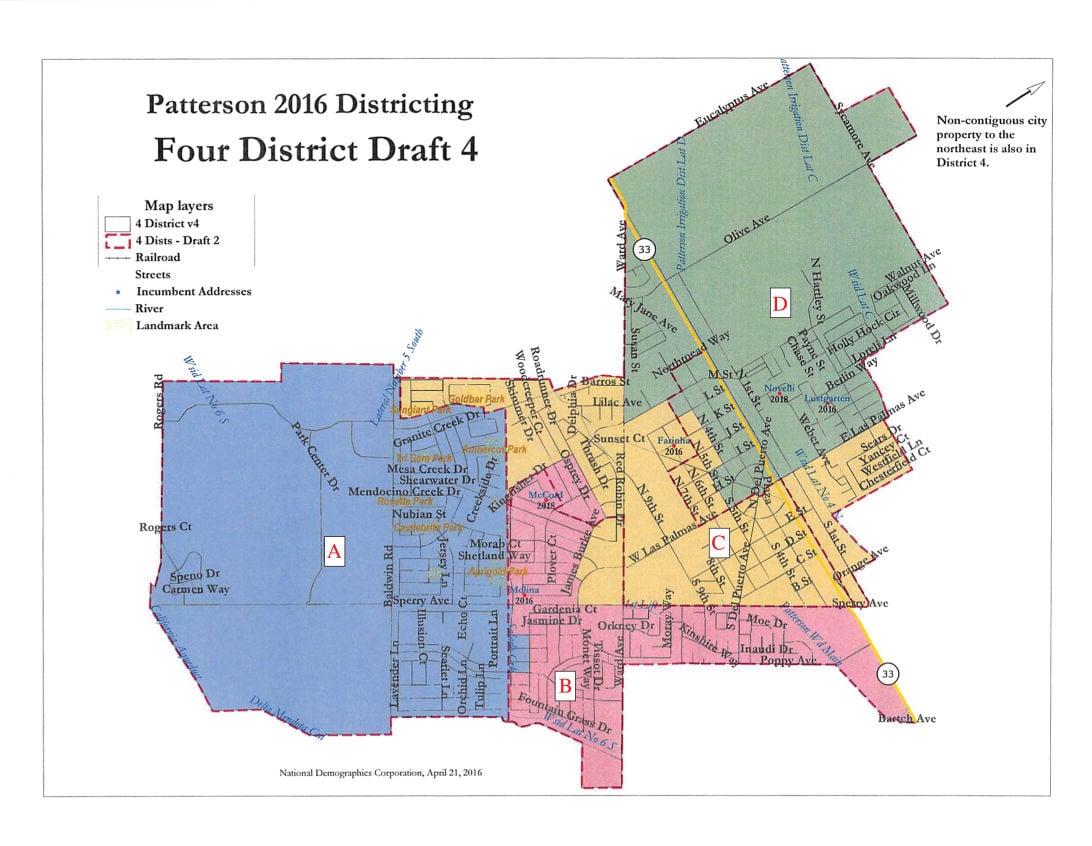 The City Council voted in Draft 4 of a four-district map April 26, as prepared by National Demographics Corporation. Councilmembers decided to change the names of Districts 1 through 4 to Districts A through D respectively – as labeled above. 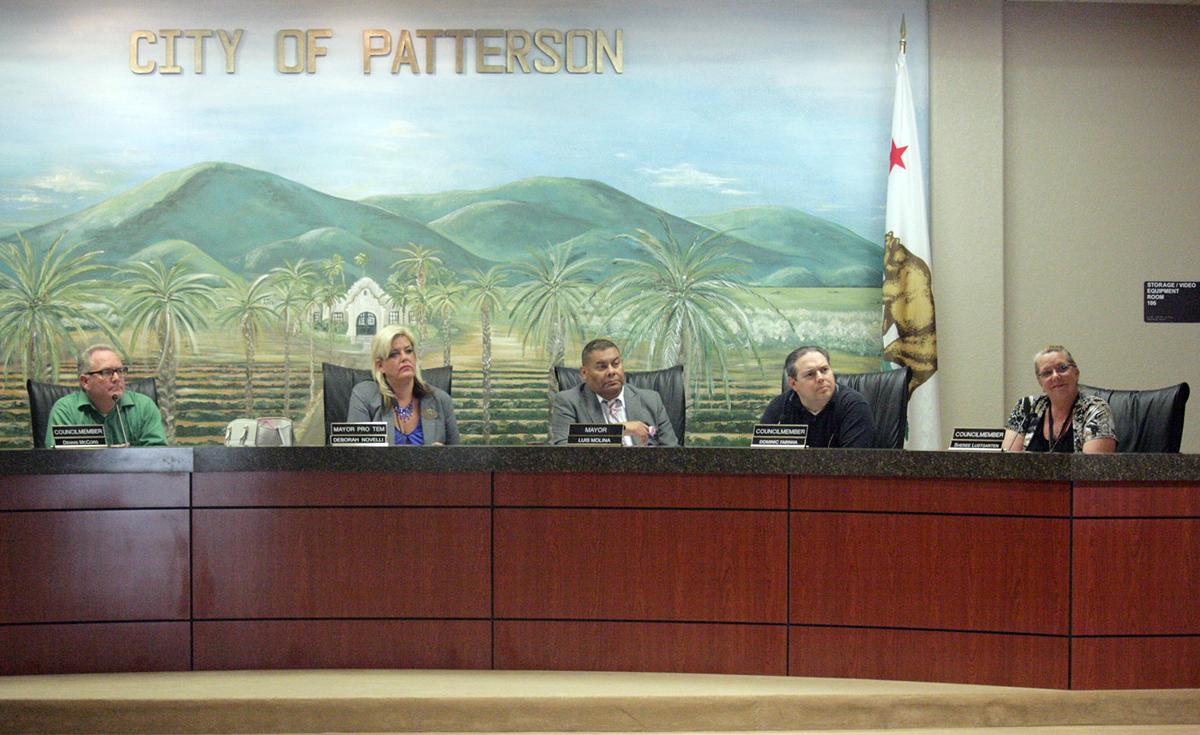 The City Council during a March 30 public hearing on switching Patterson’s at-large voting model to a by-district format.

The City Council voted in Draft 4 of a four-district map April 26, as prepared by National Demographics Corporation. Councilmembers decided to change the names of Districts 1 through 4 to Districts A through D respectively – as labeled above.

The City Council during a March 30 public hearing on switching Patterson’s at-large voting model to a by-district format.

The City Council voted in a map for Patterson’s soon-to-be-instated election-by-district voting format during a brief special meeting Monday night.

Councilmembers agreed unanimously to move forward with National Demographics Corporation’s newly prepared Draft 4 of a four-district map after a split council last week rescinded on a previous decision to go with a five-district model.

With four districts, the mayoral seat will remain an at-large post voted on citywide every two years. Each City Council seat will be assigned to its respective district as the incumbent’s term expires.

This November, Councilwoman Sheree Lustgarten and Councilman Dominic Farinha’s seats will be up for election and correspond to District A and District C respectively. (National Demographics had labeled each district 1 through 4 on the chosen map, but the City Council voted to change to an alphabetical system to avoid confusion with school board districts.)

Lustgarten’s current address is pinpointed within Mayor Pro Tem Deborah Novelli’s area, District D, which represents the north side of town. This means, City Attorney Tom Hallinan clarified Wednesday, that Lustgarten would have to move to District A in order to run for the seat on which she currently sits this election cycle.

Maggie Mejia, immediate past president and legislative chair of the Latino Community Roundtable of Stanislaus County, made an appearance Monday. In 2013, the group sent letters to the city of Patterson and the local school board, as well as many other Stanislaus municipalities, warning them that they were out of compliance with the California Voting Rights Act of 2001 because of their at-large electoral system.

“The reason we did it was not because we’re sue-happy and we wanted to sue anyone. We did it because we did not want anymore cities or school districts in Stanislaus County to be sued as the city of Modesto did,” Mejia, a former Pattersonite now living in Modesto, told the council. “Our efforts were to help the cities in the county and keep the money here where we need it the most.”

She said that the Latino Roundtable’s goal was to make sure that every City Council and school board is compliant with the state Voting Rights Act.

“I can tell you that Stanislaus County is the only county in the state of California that has taken the issue of district elections seriously,” she said. “You are the last city that has not moved forward with the exception of maybe Oakdale.”

Mejia said that the Latino Roundtable is willing to help the city speak with voters and residents about the new voting model “and hopefully they will run for district elections as your next City Council members.”

Mayor Luis I. Molina’s term is up this year as well. He has expressed that he will not run for re-election, focusing instead on a bid for the Stanislaus County Board of Supervisors, and all of Patterson’s voters will decide his successor.

Novelli and Councilman Dennis McCord will continue to be considered elected at large and represent the whole city until their terms expire in 2018.

Responding to a question from Farinha, Hallinan said Monday that the City Council does not legally have to wait for the 2020 census to redistrict its seats.

A concern of the City Council’s was choosing a map that had a somewhat balanced Latino citizen voting age population (CVAP) between each of its election districts, while also making sure the map was compliant with the California Voting Rights Act. The Latino CVAP for the chosen districts:

City Attorney Tom Hallinan said that the city wanted to have an about 50 percent Latino CVAP in two districts to meet legal concerns.