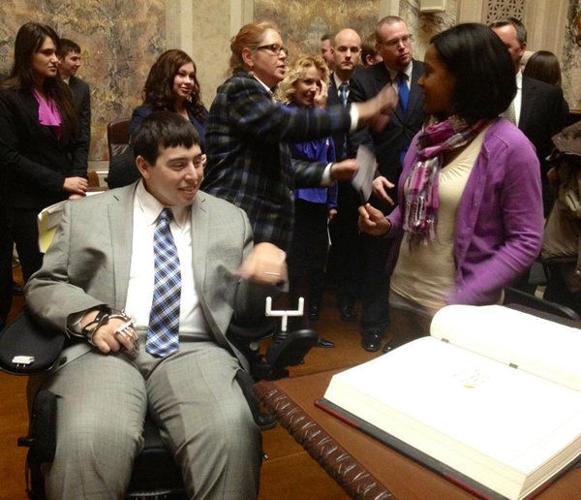 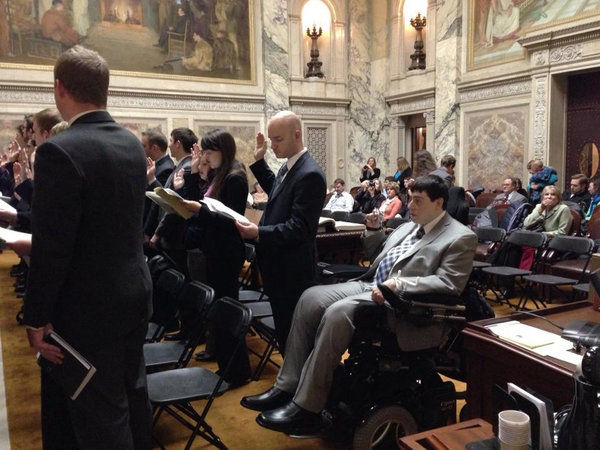 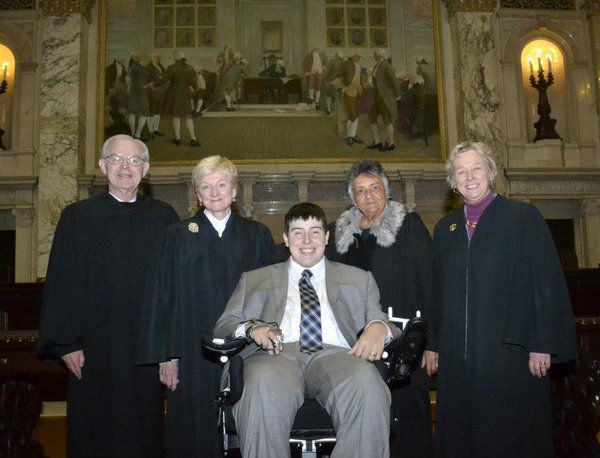 Finishing law school is a challenge under ordinary circumstances.

Former Patterson resident Jimmy Anderson completed the task as a quadriplegic, having lost most of his ability in his limbs — along with his parents and his 15-year-old brother — in an August 2010 crash in rural Patterson.

On Jan. 31, he was sworn in as a lawyer at the Supreme Court chambers in the Wisconsin State Capitol building, after four and a half years of law school at the University of Wisconsin in Madison.

He said he could sense the presence of his late parents, who had inspired him to complete his law degree.

“It was those things that they instilled in me that got me to that point, so they were there with me in spirit,” said the 26-year-old, reflecting last week on the Jan. 31 ceremony.

He said he had an interest in political science for years and had wanted to become an attorney since he worked as a legal assistant at a firm in Monterey while studying for his undergraduate degree at California State University, Monterey Bay, in 2008.

While Jimmy Anderson cited his parents as an inspiration, he also inspired them.

His mother, Emma “Gabby” Anderson, an employee at Patterson Frozen Foods, was born in Mexico and completed high school only after the elder of her two sons went to college.

She went on to attend Modesto Junior College and was studying at California State University, Stanislaus, at the time of her death at age 44.

His father, James Anderson, a truck driver and an assistant coach for the Patterson Redskins Pop Warner football team, was 49 when he died. His son said he was also supportive of his children’s scholastic endeavors.

Rowell, 40, who also died in the crash, had a blood alcohol content of 0.10 percent, according to the Stanislaus County Coroner’s Office. The legal limit is 0.08 percent.

Jimmy’s wife, Ashley, who was spending time with friends in Modesto the evening of the crash, later had the task of notifying him in the hospital that he was paralyzed and that his immediate family was dead.

The experience eventually prompted Jimmy Anderson to speak at mock car crashes at various high schools to educate students about the perils of drunken driving. He also shared his story with drunken-driving offenders while studying for his law degree.

Earning that degree was no small accomplishment. Though Jimmy Anderson was enrolled in a program at the University of Wisconsin that allowed him to take extra classes in lieu of sitting for the state bar exam, he faced physical challenges because he can no longer use his triceps muscles.

To take notes, he used voice-recognition software, and he read materials digitally and typed using a touchpad with the knuckle of his smallest finger.

He recalled speaking until his mouth was dry when he had to dictate 20- to 30-page papers within a four-hour period during final exams.

Through it all, he said his wife has helped him with everyday tasks, even as she continues to earn her degree in veterinary medicine from the University of Wisconsin.

“I consider him a friend now,” Posey said last week. “It’s weird to talk of him as an ex-student.”

Jimmy Anderson was popular among his tennis teammates for his positive outlook and his sarcastic sense of humor, Posey said.

He said that attitude, coupled with the support of his wife, appears to have served the younger man well in his endeavor to complete law school.

“I am absolutely astonished that he was able to do it with all that life threw at him, but it doesn’t surprise me at the same time,” Posey said. “It’s like — of course, he did.”

A close friend of Jimmy Anderson, Patterson resident Corey Bergendahl, said last week that he never doubted his friend would achieve his goal.

“To be honest, it doesn’t surprise me one bit,” he said. “I know what drive Jimmy has.”

Since becoming a member of the bar, Jimmy Anderson has considered a career in civil litigation, following up on job leads and reflecting on his life.

“It’s the milestones that force you to reminisce on the path that led you to that point,” he posted on his Facebook page on Feb. 1. “It’s difficult not being able to share in the joy of those moments with my family. It reminds me how much I miss them.

“Take stock of those things and people in your life that are irreplaceable.”