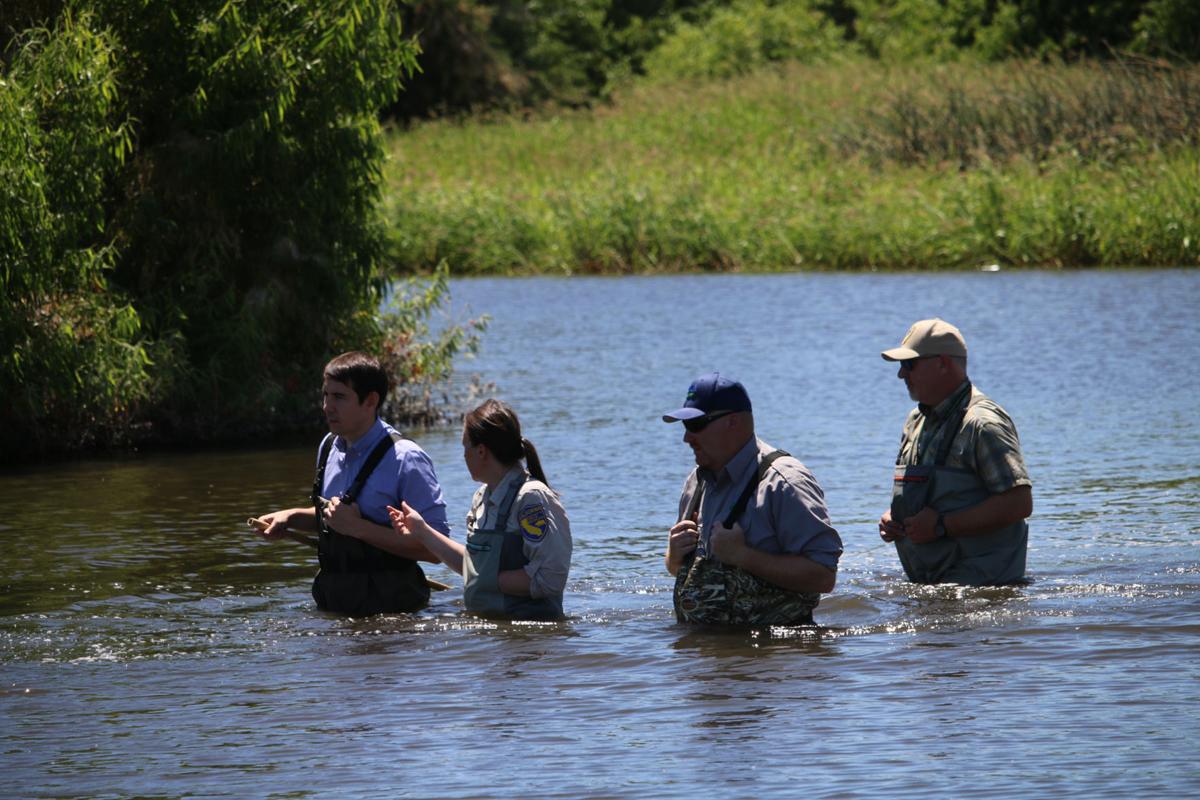 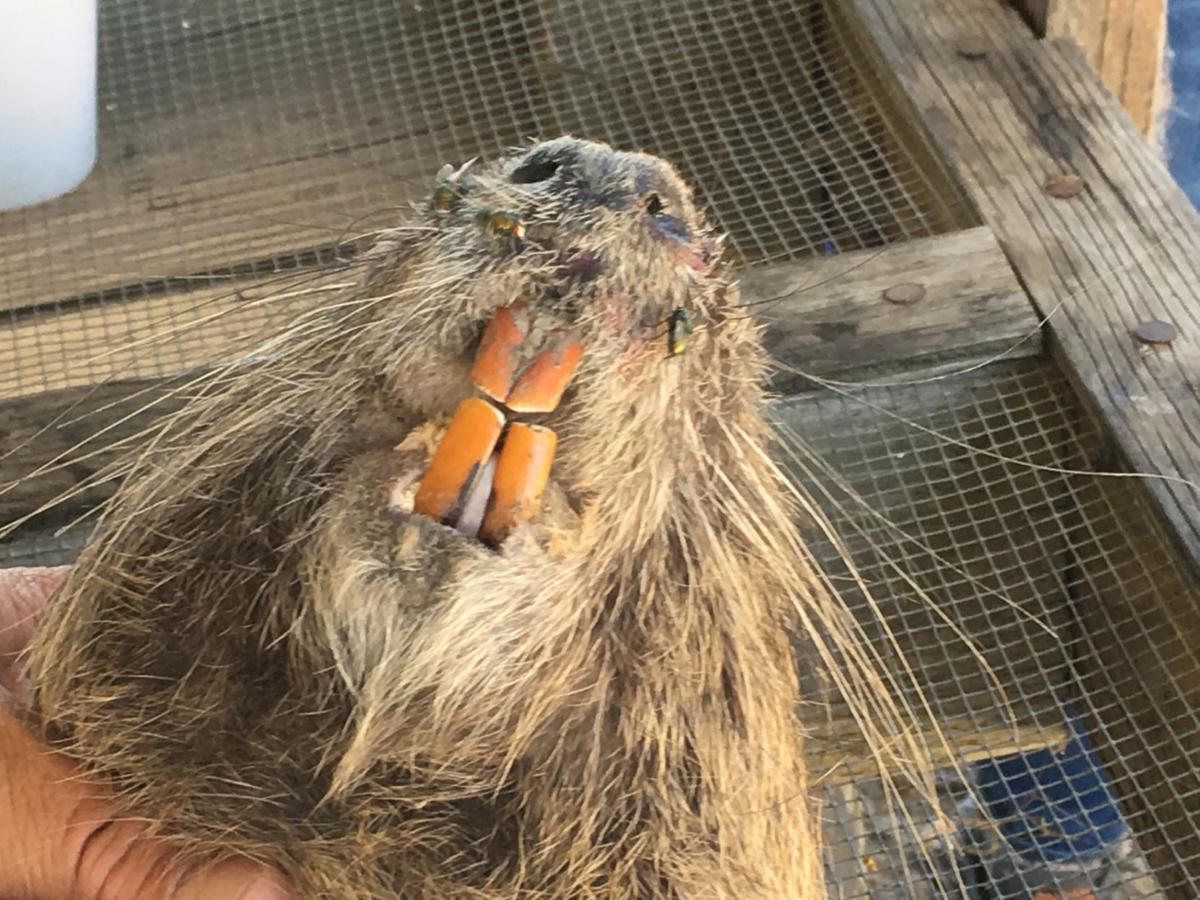 A view of a nutria showing its orange teeth. The color is caused by iron in the enamel of the rodent's teeth. 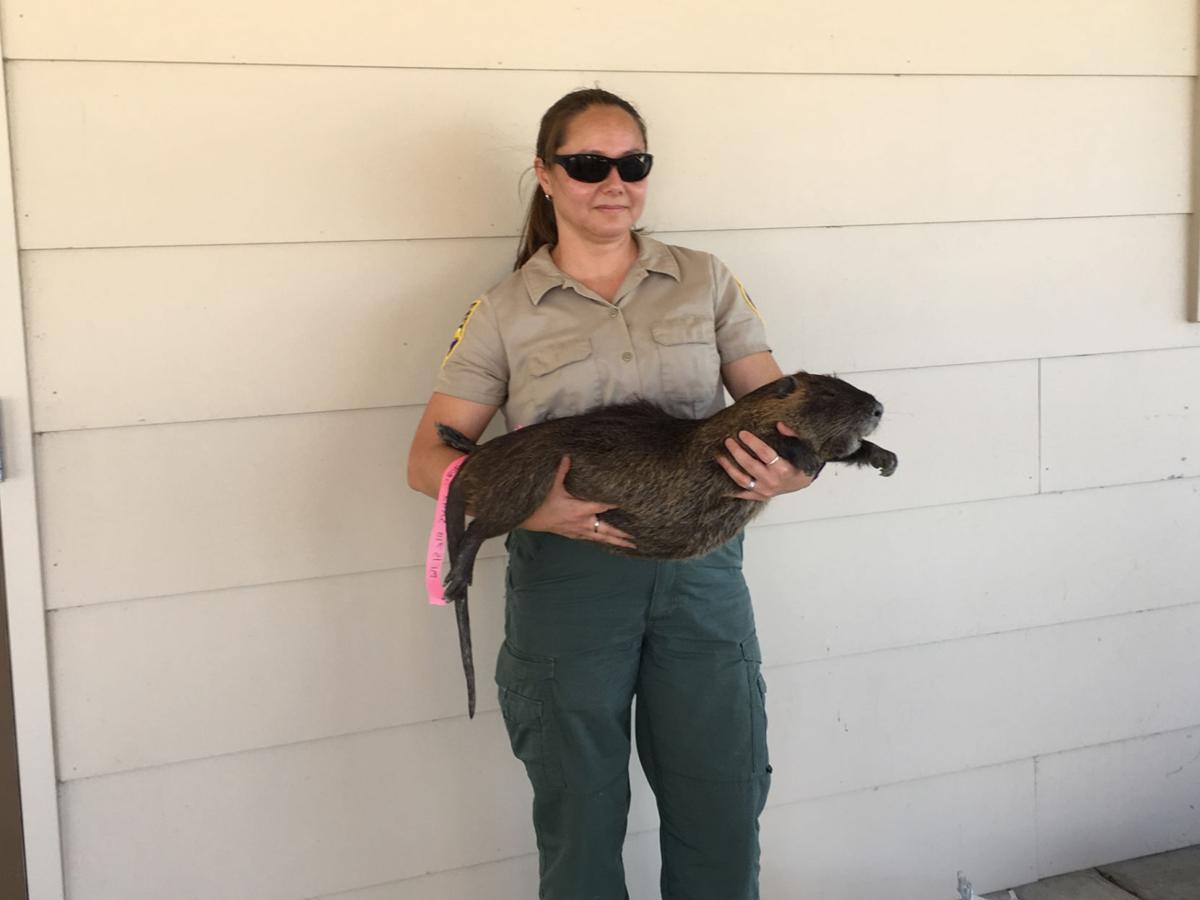 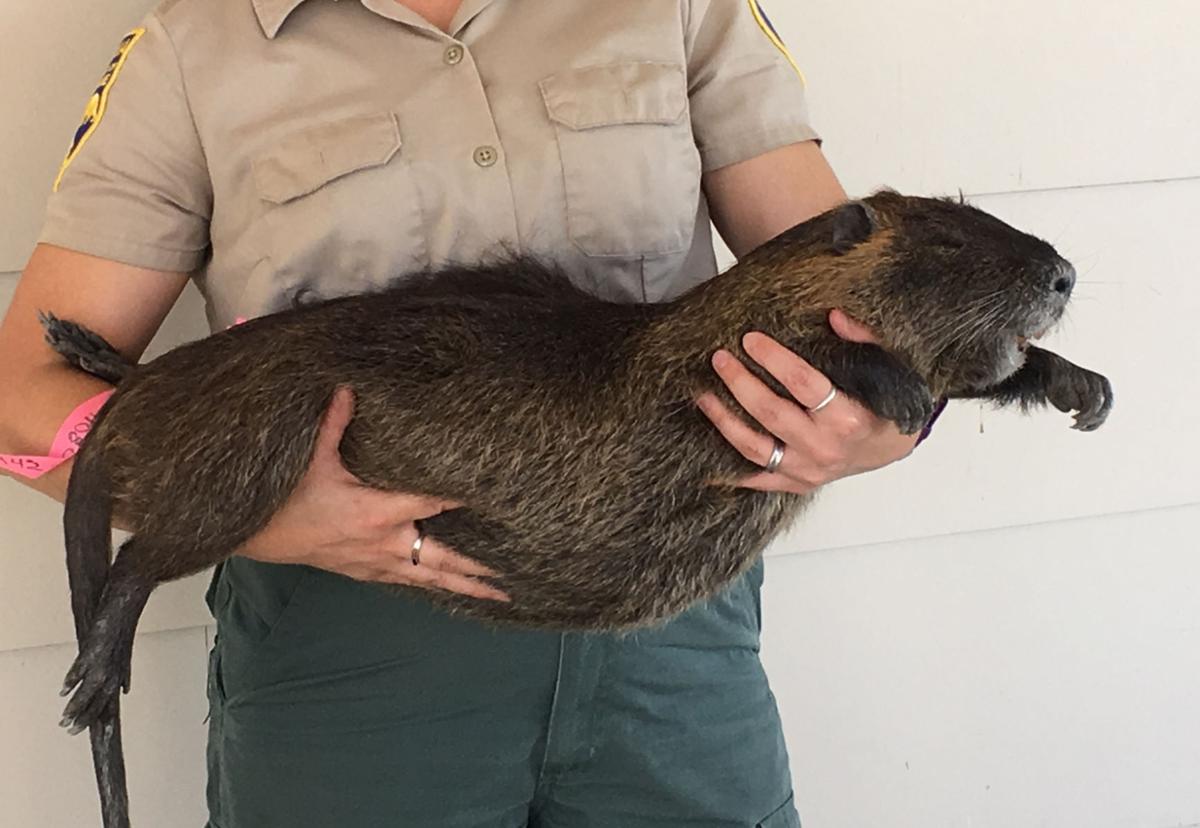 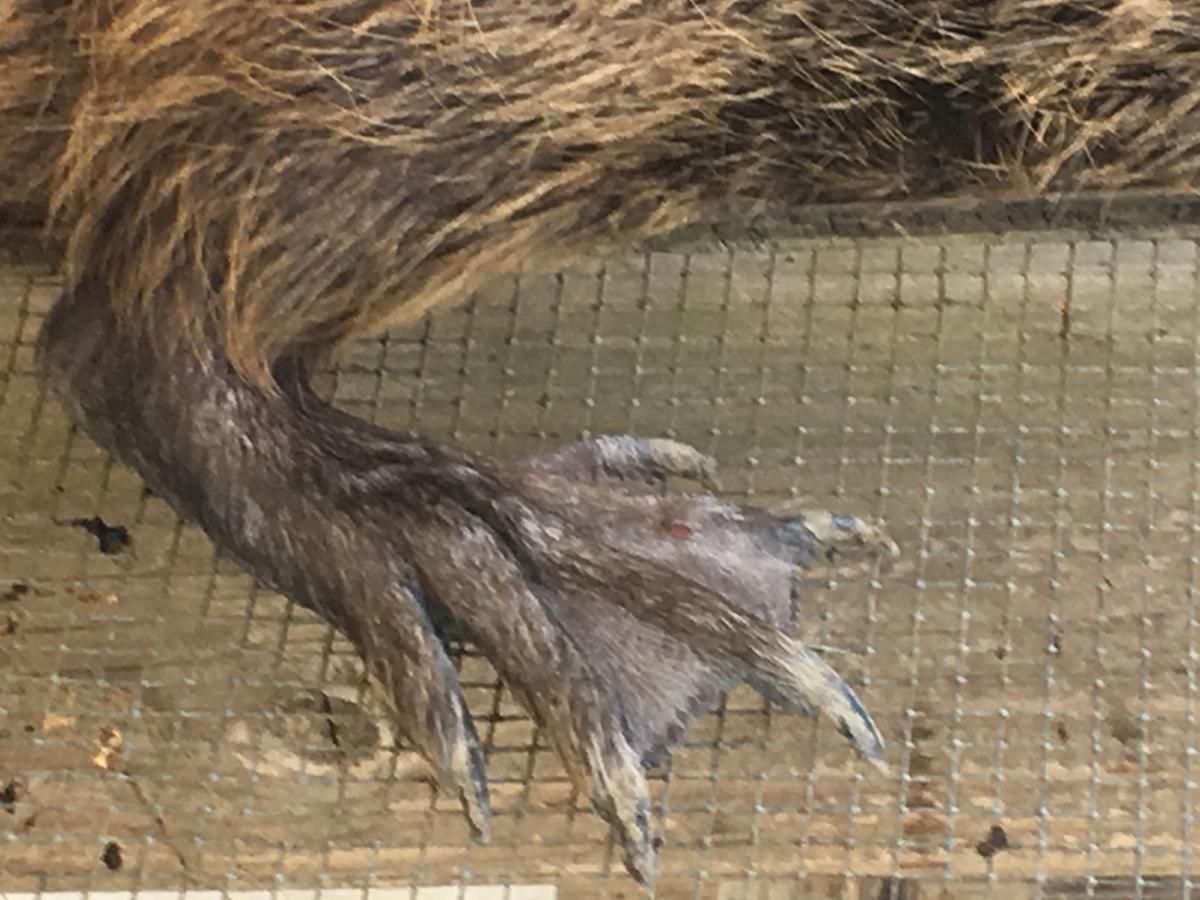 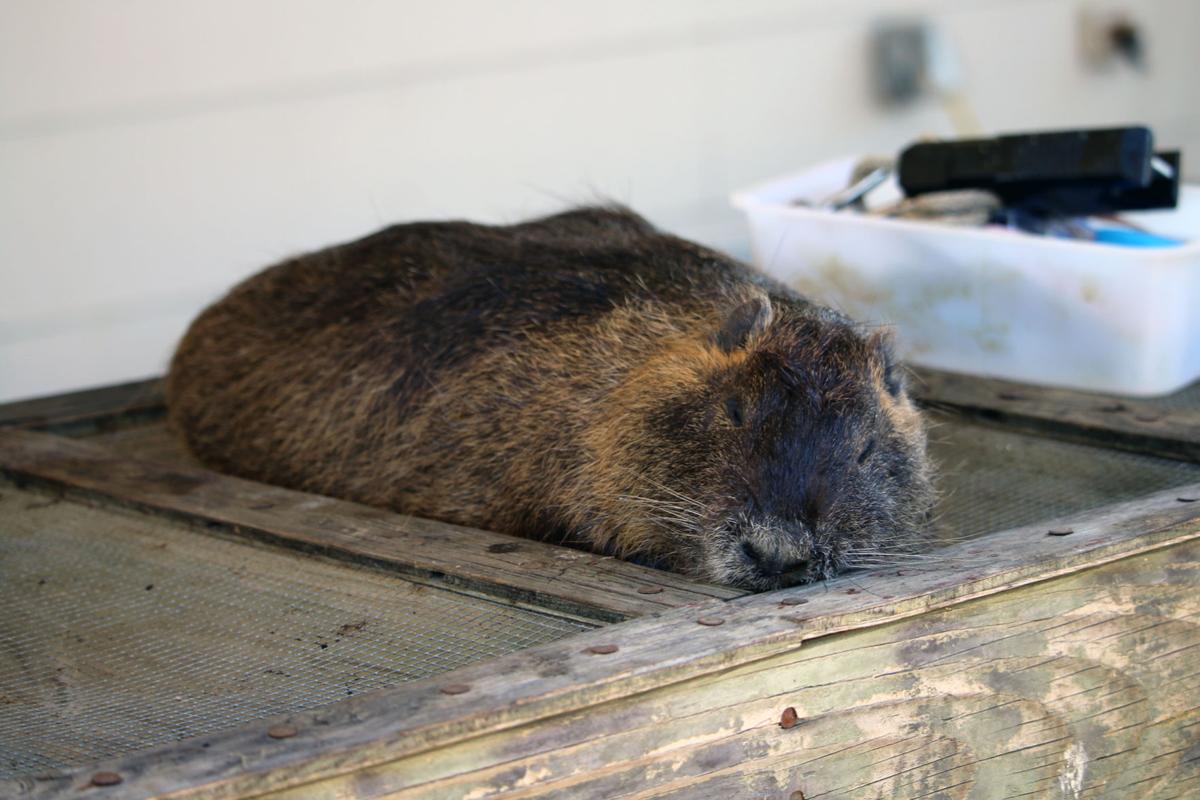 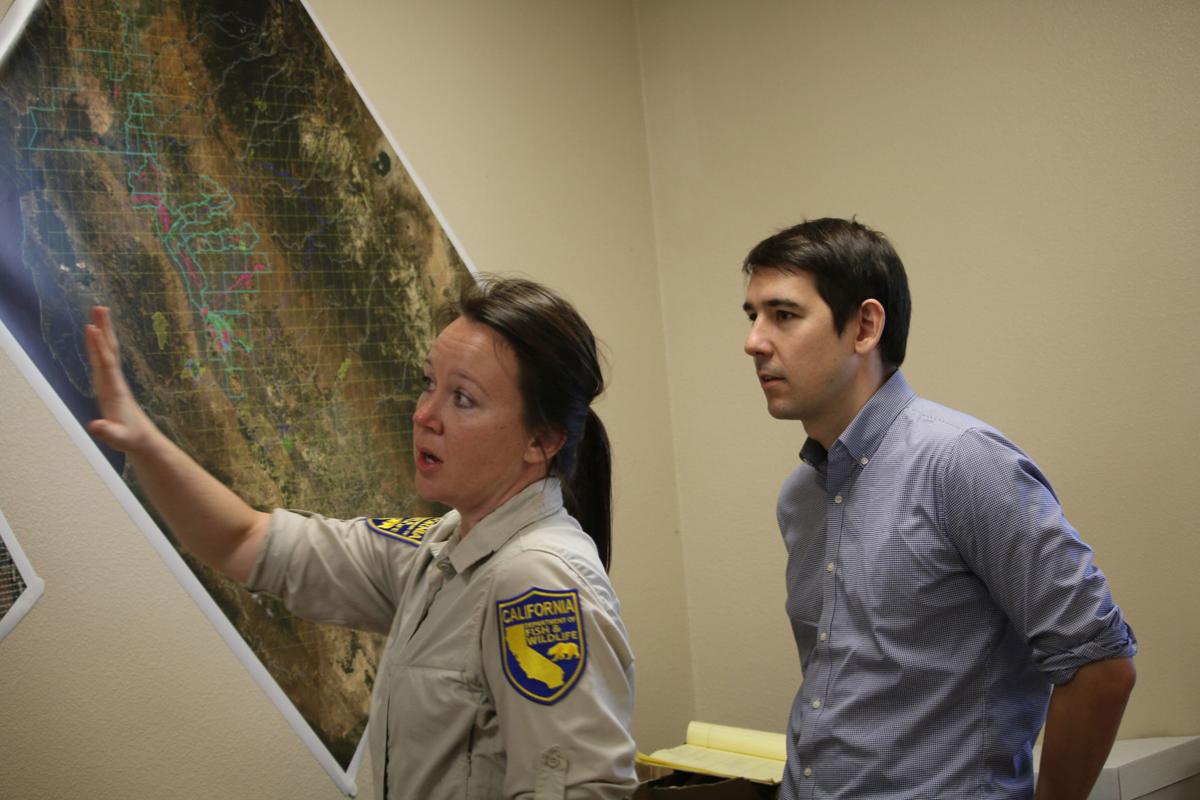 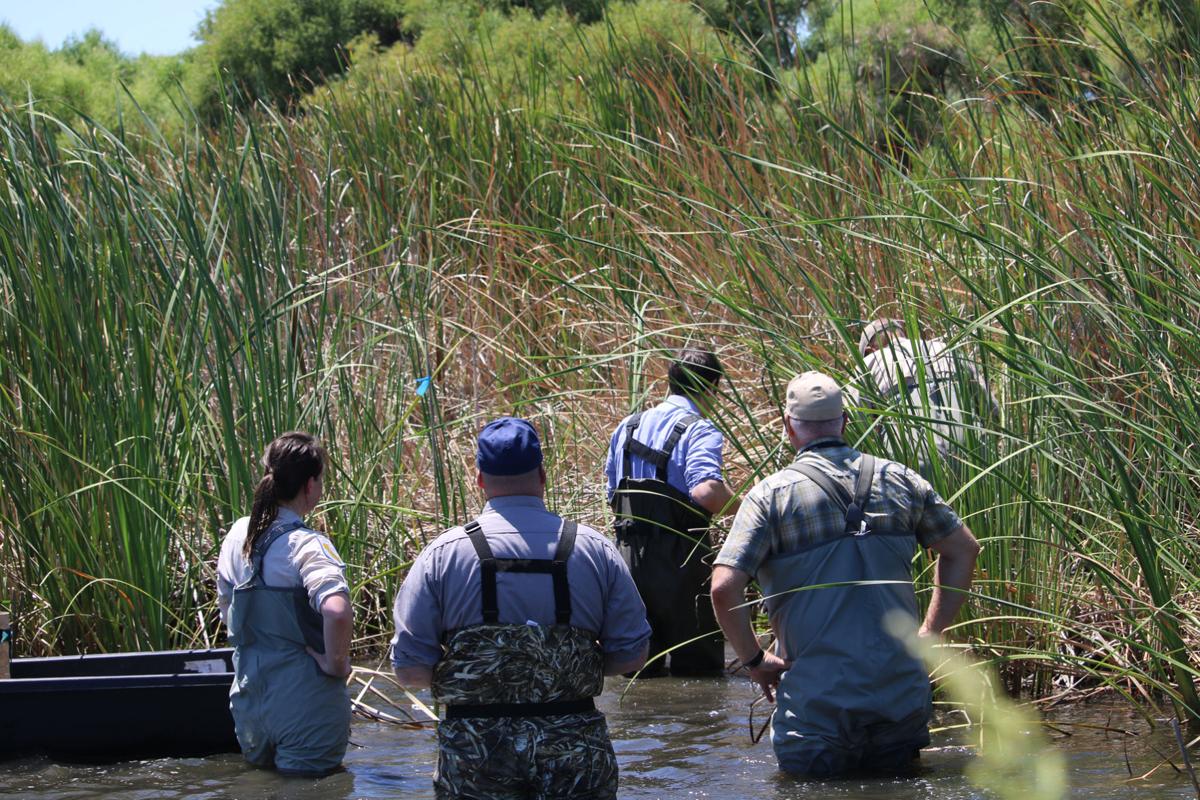 Congressman Josh Harder, D10, checks traps with CDFW officials during a media event to call attention to the invasive creatures on Friday, August 2. 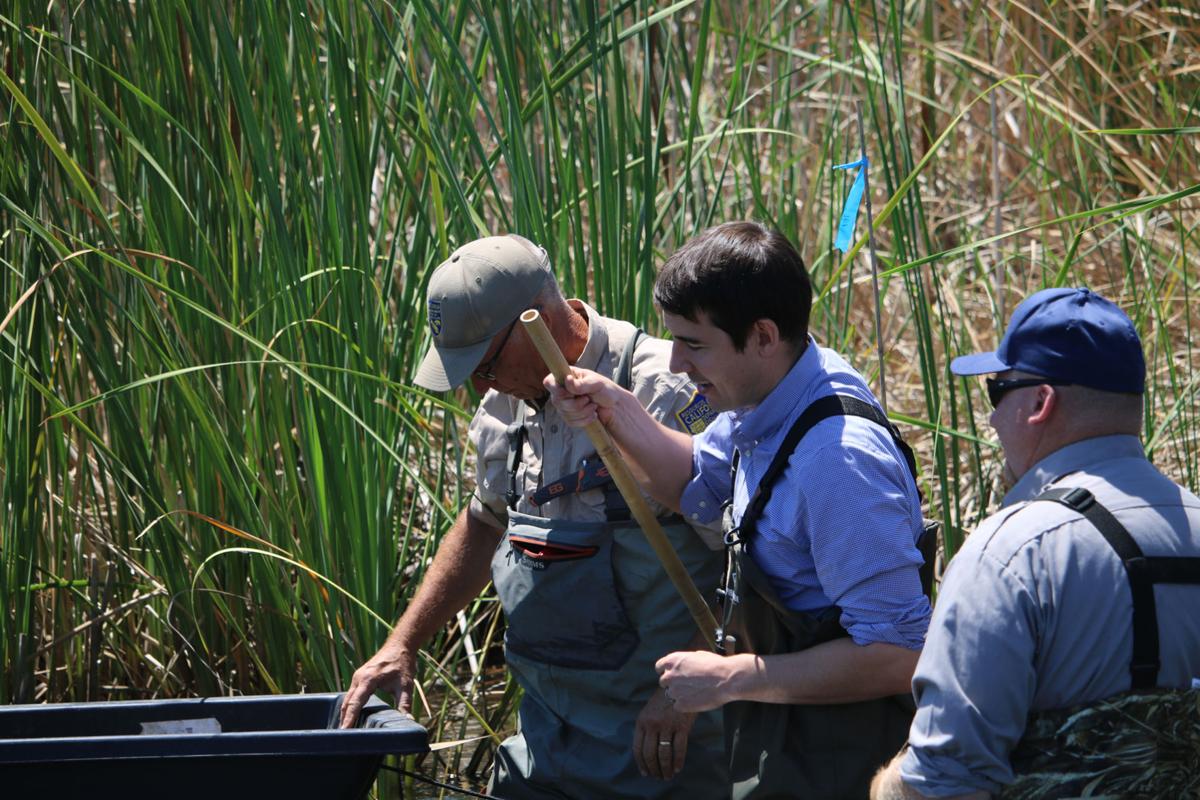 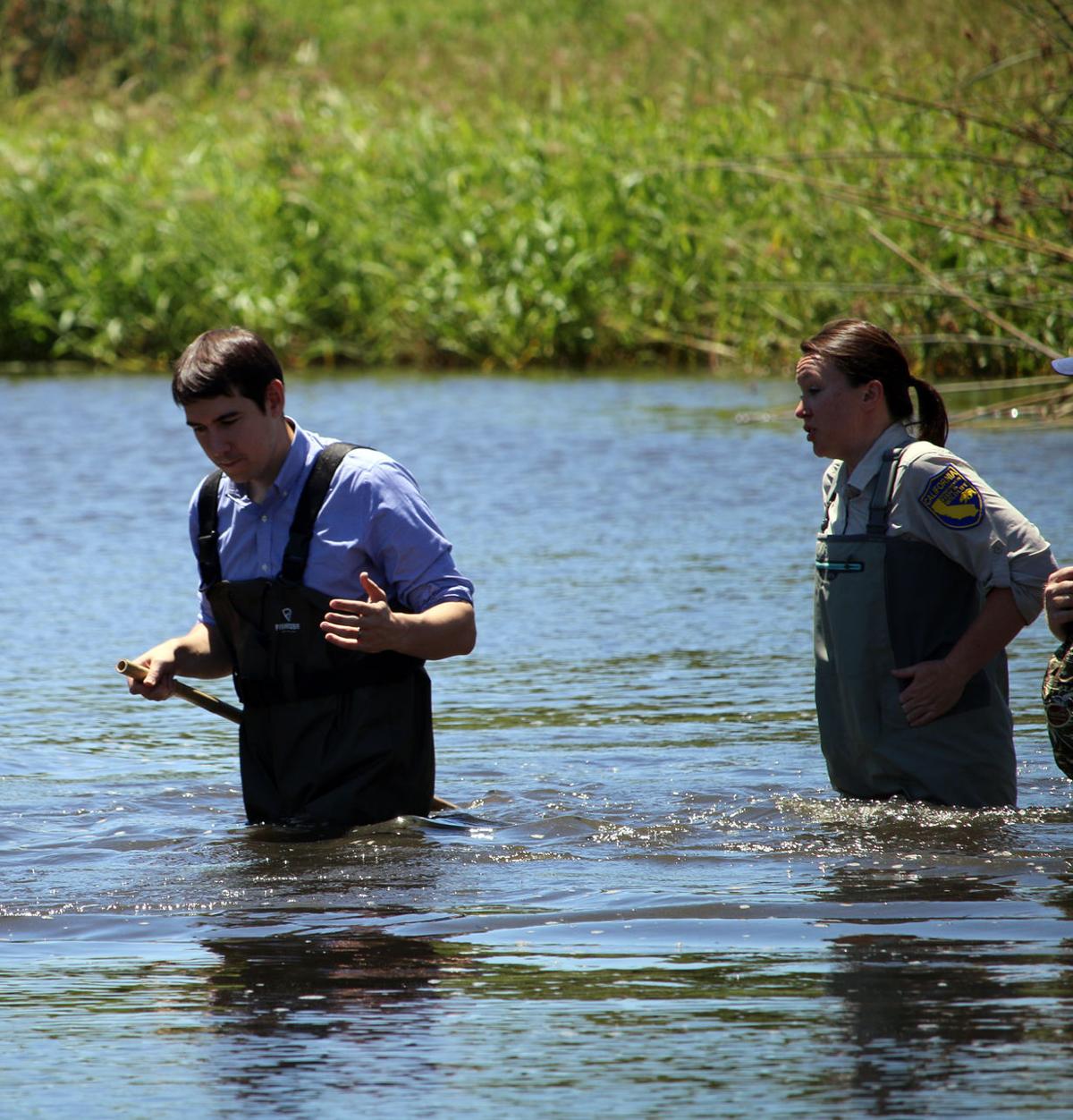 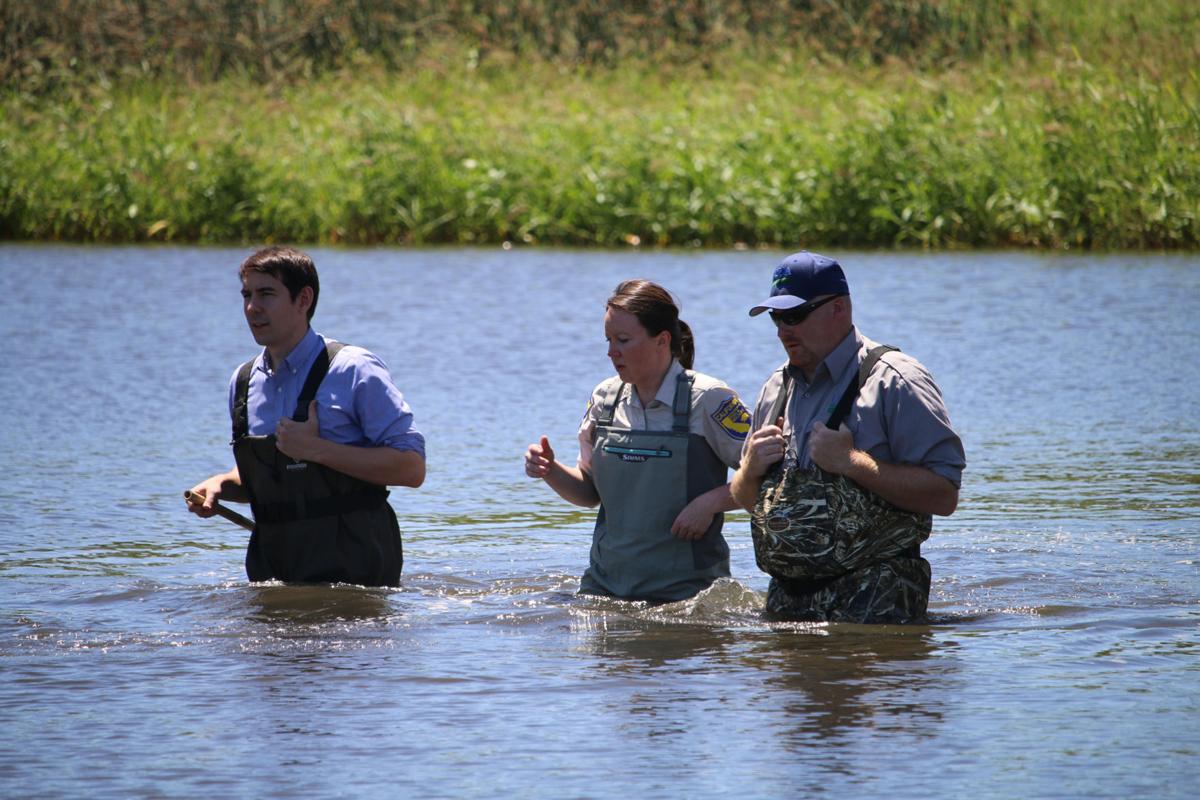 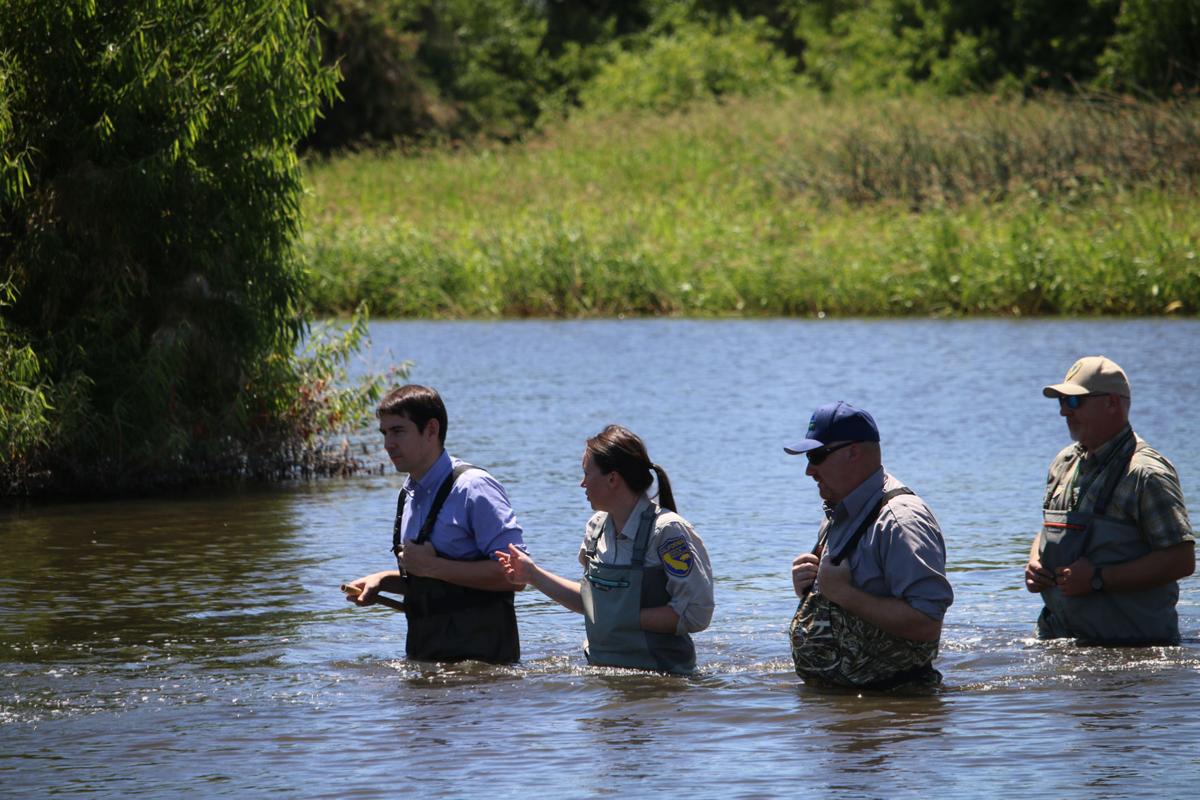 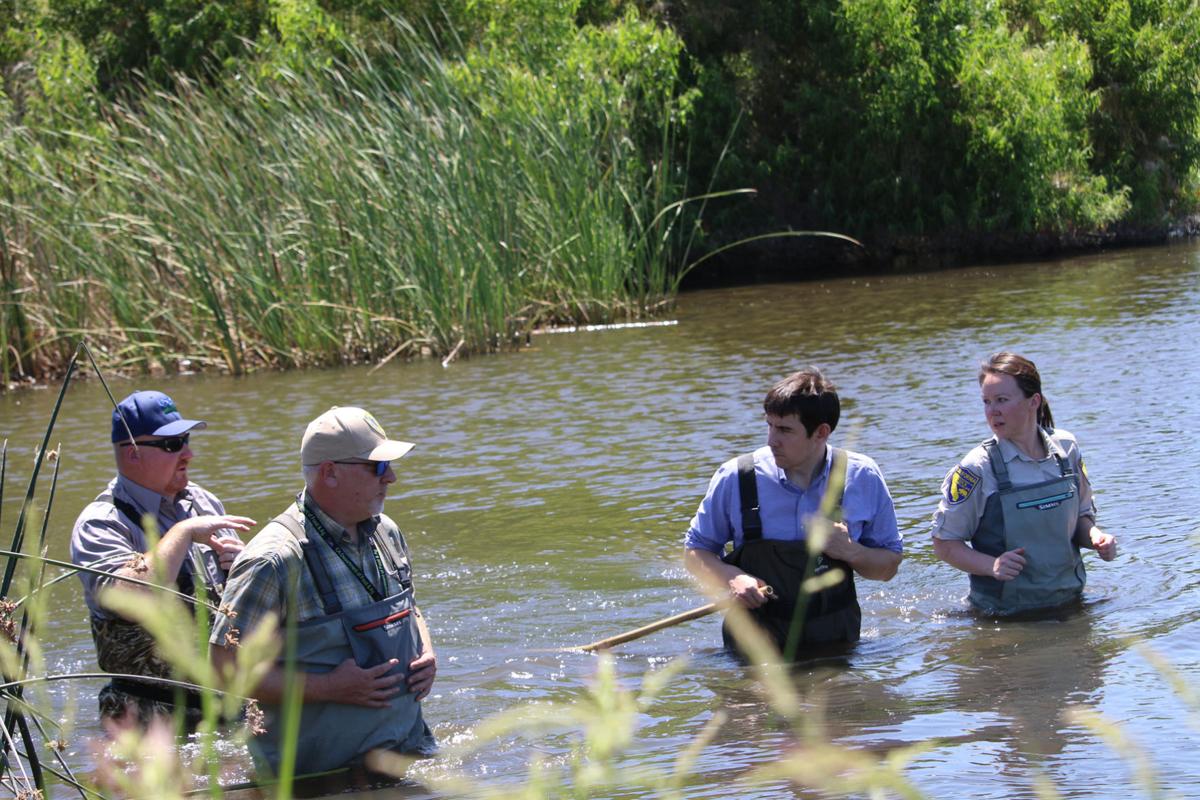 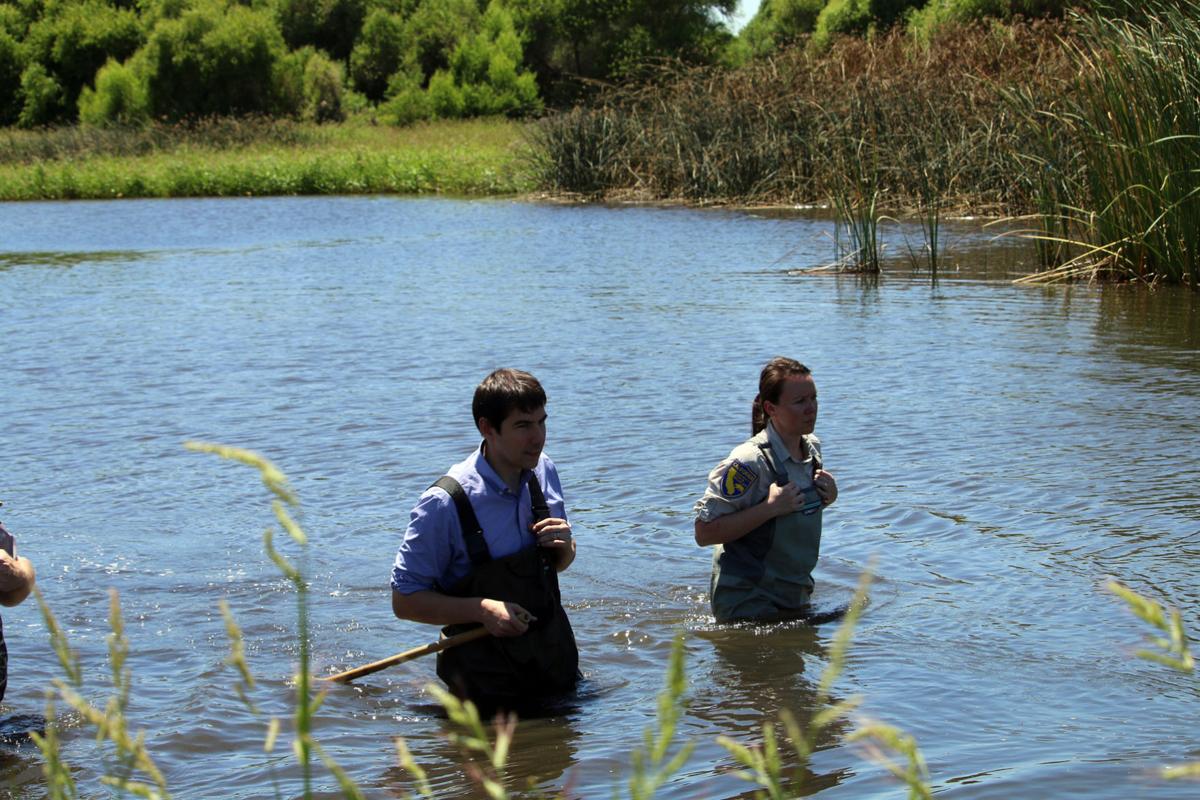 Congressman Josh Harder and the California Department of Fish and Wildlife (CDFW) teamed up last Friday to raise awareness of an extremely invasive and potentially devastating South American rodent species called nutria, which has been found in Stanislaus County, and which pose a serious environmental and economic threat.

The rodents, which are native to South America, and whose name means “otter” in Spanish, live along waterways. They can breed at four months, have six to 13 in a litter and can breed again within two days of giving birth. A single female can be responsible for the production of up to 200 offspring in just over a year. They weigh up to 20 pounds, and typically live three to four years. They can consume up to 20 percent of their body weight in plant matter every day.

They are nocturnal, and so are not active when the diurnal predators that might control their population, such as birds of prey, are out hunting.

Nutria, also called coypu, will eat just about any kind of vegetation, and are capable of completely destroying critical wetland wildlife habitat. And, like ground squirrels, they burrow, creating extensive tunnel systems and endangering levees and other infrastructure.

Their destructive burrowing and rapid reproduction “jeopardize the state’s water delivery and flood control infrastructure,” according to a CDFW fact sheet.

Several other states, most notably Maryland and Louisiana, are also dealing with nutria infestations.

Yet this is not the first time California has battled nutria – they were brought here (and to other states) for the fur trade in the late 1800s. In the early 1900s, the state actually licensed nutria farms. Once the fur market collapsed, however, many of the animals were turned loose or escaped. Nutria were declared formally eradicated here in the 1970s.

Nutria were detected again in the state in 2017, when a pregnant female was caught in a beaver trap in Merced County. They have since been sighted in Merced, San Joaquin, Stanislaus, Mariposa, Fresno and Tuolumne counties, according to the CDFW.

CDFW staff have launched an incident response to the infestation, and have redirected significant resources, from Chico to Bakersfield, to respond to the threat. But much more is needed: CDFW Nutria Eradication Program Manager Valerie Cook is “trying to get long-term funding to make it work.”

“There is a limited window of opportunity to respond with adequate resources to eradicate before this population grows too large,” she said.

CDFW has set up about 900 camera stations, checked over a half million acres of potential habitat for the pest, and has completed more than 1,500 trap sets, Cook said, confirming nutria currently in over 150 sites. Officials have taken close to 700 nutria, she said; 37 of those in Stanislaus County, and 578 in neighboring Merced County.

Nutria detecting dogs, who can find sites, and confirm that an area has been cleared, are another tactic CDFW plans to use.

Cook also mentioned something called the Judas Project, wherein sterilized nutria are fitted with monitoring devices and re-released into the wild. Authorities anticipate that the tagged and sterilized nutria will help them learn more about the animal’s habits, as well as identify new colonies and potential habitat.

Authorities have not confirmed how the nutria re-infestation came about, but Cook said she’s “confident that this was a re-introduction.”

Regardless of how the animals got here, “eradication is what has to happen,” she said. “It’s a big job, but it’s gotta be done.” Cook said complete elimination is necessary to avoid “devastated wetlands, complete loss of wetland soils, damage to our waterways, burrowing into our infrastructure that damages our agriculture; (and damage to) our flood protection.”

Harder also supports the concept of eradicating the pest, referring specifically to the animals’ reproductive habits: “this is a massive curve that just stretches algorithmically up, and either we’re able to get a handle on it today, or - one female, 200 offspring a year; it’s gonna be a massive problem for all of our water, all of our ecology, so it behooves us to get this done,” adding that he’s introduced a bill at the federal level to provide long-term support. “This isn’t a partisan issue,” Harder said.

Cook emphasized that ongoing funding is critical to completely eliminate the rodents. “It’s critical that you stay at it for the long term,” she said, “because that’s where eradication fails, is premature declaration of eradication - or when your funding runs out too soon. Long-term support.”