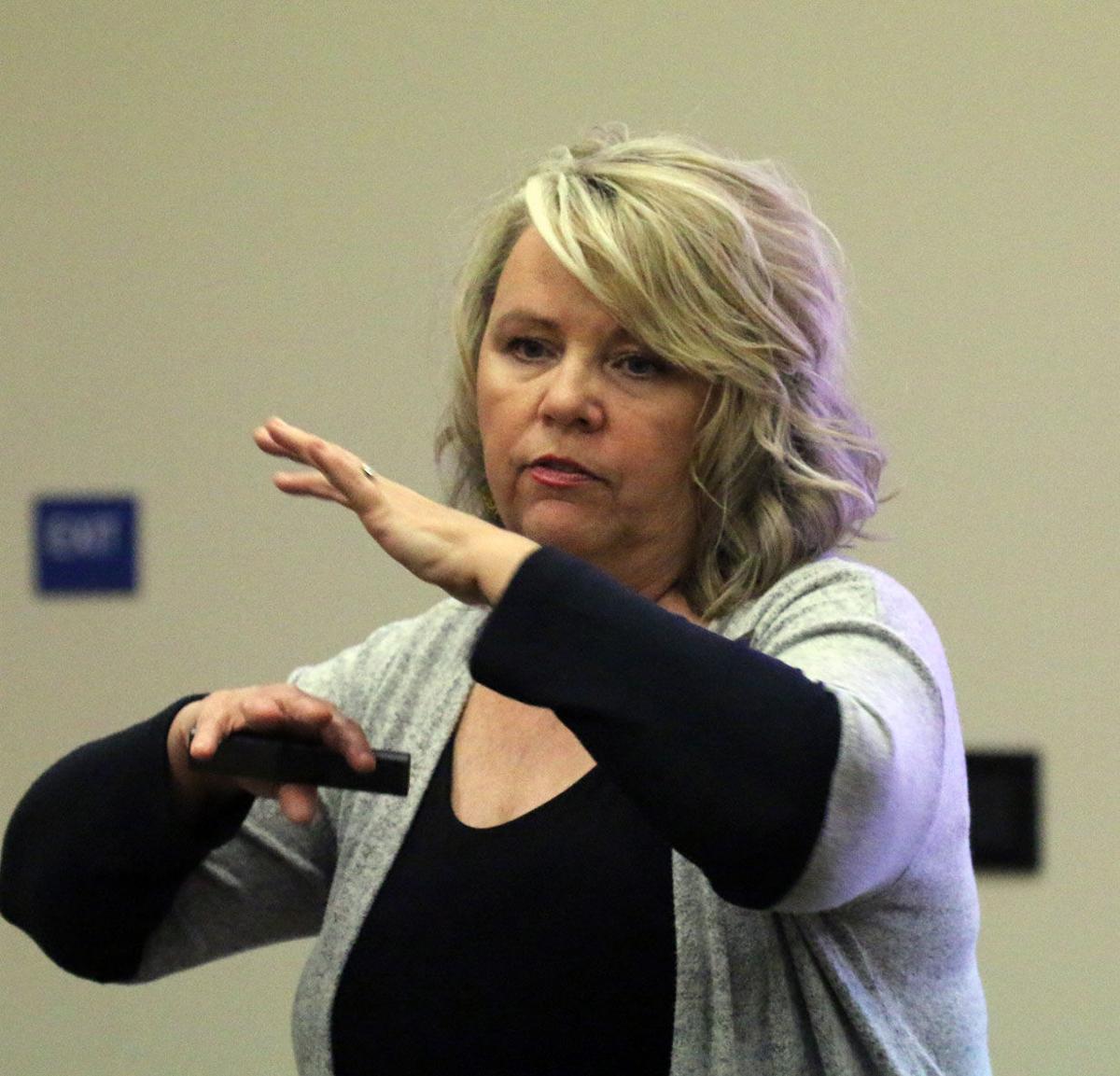 Without Permission founder Debbie Johnson speaks during the presentation to inform parents how to protect their children, both in person and online, from child predators at the PJUSD Professional Development Center, on Wednesday, Oct. 23. 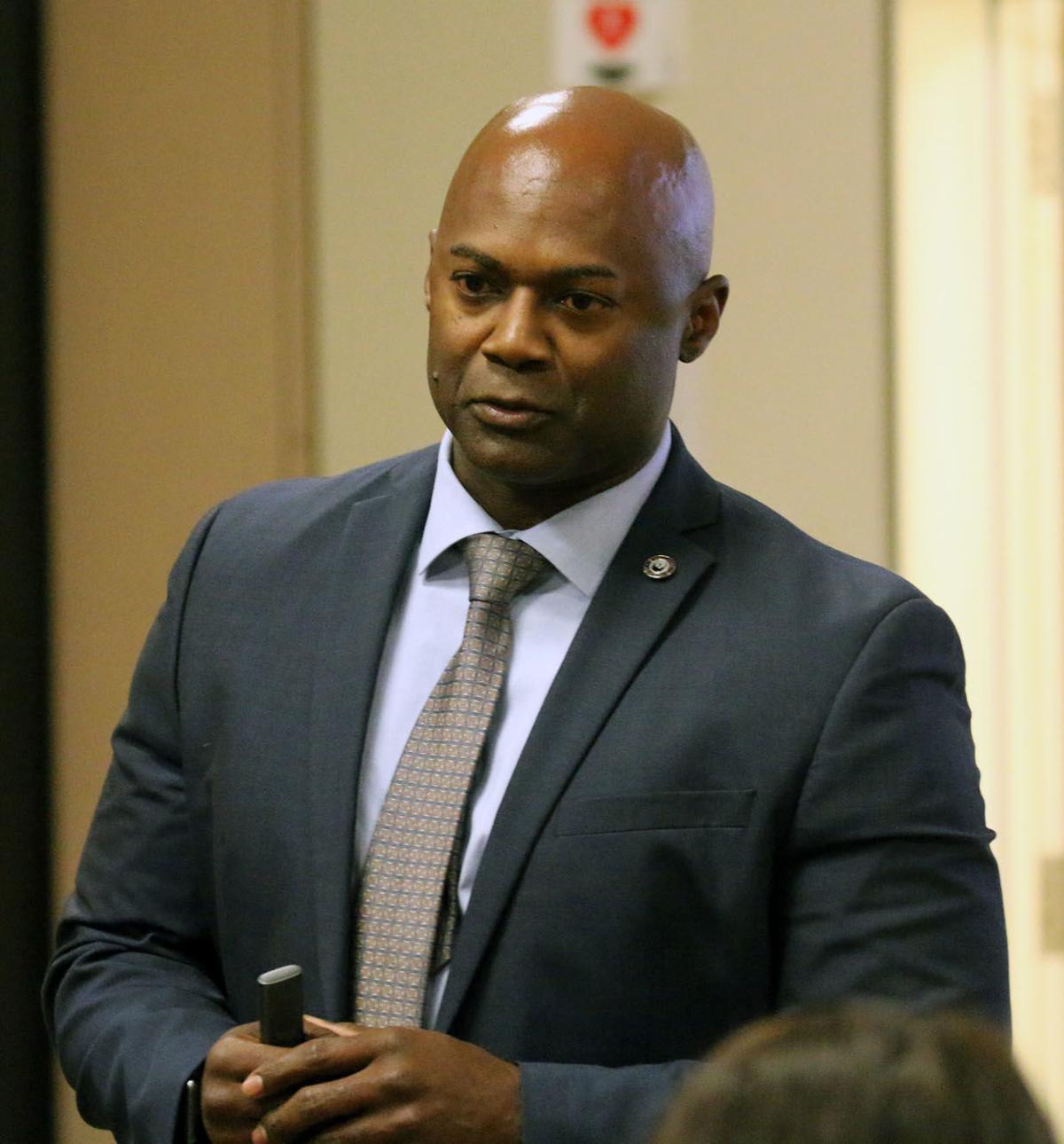 San Jose Police Dept. Lt. Brian Spears speaks during the presentation to inform parents how to protect their children, both in person and online, from child predators.

Without Permission founder Debbie Johnson speaks during the presentation to inform parents how to protect their children, both in person and online, from child predators at the PJUSD Professional Development Center, on Wednesday, Oct. 23.

San Jose Police Dept. Lt. Brian Spears speaks during the presentation to inform parents how to protect their children, both in person and online, from child predators.

Editor's note: this story has been updated to correct an error. The Principal of Del Puerto High School is Jose Sanchez. The Irrigator regrets this error.

Within hours after Johnson had given a presentation at the school earlier this month, Sanchez said, a student had come forward because she’d realized that she might have been approached by a trafficker. A police report has been filed, and the case has been added to the growing number that local law enforcement is working on.

“In Patterson, and in the school districts across the county, we have protocols and procedures in place, so that schools can respond,” if a student comes forward, Johnson said. “We have a strategy to do prevention awareness at every high school across Stanislaus county, and the junior highs, so that our students have the information they need to stay safe.”

What it is, who it affects

Anyone who trades sex acts for anything of value under force, fraud or coercion is the victim of a crime, Johnson said, and anyone can be a victim. To put it into non-law enforcement terms, “violence, trickery, manipulation.”

And anyone under the age of 18 who trades sex acts for anything of value (a place to stay, a meal, drugs, money) is also the victim of a crime, under both state and federal law, Johnson said.

The youngest victim of human trafficking that Without Permission has served was a 12-year-old boy, Johnson said. The oldest, a 40-year-old mom.

Editor’s note: Although her focus is sex trafficking, Johnson acknowledged that labor trafficking, domestic servitude and debt bondage also all occur, but the resources to combat them have not been coordinated as they have for human trafficking.

Traffickers use force, fraud or coercion to control their victims physically and psychologically, Johnson said. “If I haven’t slept in 3 days, and haven’t eaten – how good are my cognitive skills gonna be?”

“Traffickers like to move into our small, sleepy towns little towns along big interstates like (Highway) 99 and I-5, and integrate into our communities for six or seven months, get to know girls, (establish) relationships with them, and then sweep them off into that life.”

Traffickers continually keep their victims moving because they know that law enforcement investigations end at the boundary to the next jurisdiction, because it makes it more difficult for victims to be found – and because it minimizes the chances of their victims having a chance to create trust with anyone who could help them.

The following comments by human trafficking survivors are from a video made by Without Permission.

A victim who was recruited at 15 said, “After I met my friend, she kind of led me on down this path that kind of just put everything out of control. And at that time, I believed of her as, like a big sister. And I trusted her. A lot. With everything. And she betrayed me, you know?”

“Out of (human trafficking for) 19 years; I still feel the brokenness and pain in my body from the violence, every day. I still have nightmares, sometimes.”

“Now, I’m able to be confident; have a smile on my face, and be happy. Because I know that I am strong.”

“What happened to me doesn’t define me.”

Anyone can be a trafficker, Johnson pointed out, showing a slide with a number of ordinary-looking people, all of whom had been arrested for trafficking. “Family. Siblings. Male. Female. Professionals. Classmates. Boyfriends. The trafficker always knows the victim is a target, but the victim never knows they’re a target, until it’s too late.”

Traffickers target youth wherever they are, so wherever they hang out is where traffickers will be “shopping,” Johnson said. Gangs are now involved in human trafficking, and will send people to youth parties to recruit.

What traffickers look for

Traffickers target vulnerabilities – someone who doesn’t have a lot of self-confidence, or friends, or a strong family, or who struggles in school.

Addressing the students in the room, Johnson said, “We never know what’s going on at home. So maybe instead of jumping on the bandwagon of talking about, making fun of…maybe be the person that lifts others up, because we never know what people are enduring at home.”

“This is not a law enforcement issue,” Johnson said, “we cannot arrest ourselves out of human trafficking.” The solution requires “a collaboration with law enforcement and resources, and schools, and emergency personnel, and parents, and students – it’s all of us.”

By being informed and aware, each and every one of us has the ability to do something to help, Johnson said.

Spears began by pointing out that 80 percent of 10-year-old American girls have been on a diet.

Spears told the audience about a case involving seventh graders “Lily” and “Kate,” and their communication on Instagram. The incident began when Lily received a message from Kate. It didn’t look quite like Kate’s normal page, but Lily overlooked that.

“Kate says she’s been bullied, and she’s being body shamed,” Spears said. “Over the course of time, Kate befriends Lily. Throughout their conversation, Kate starts begging Lily: ‘Do you think I’m ugly?’

“Kate starts talking about hurting herself. Under that pressure, Lily took a picture of herself – and things changed very drastically, because the Instagram messages weren’t actually from Lily’s friend Kate,” Spears said. An investigation revealed Lily was not the only victim. The suspect was an adult male, residing in New York, who was strategically targeting several hundred children throughout the United States, Spears said.

“Sexting” (sending out pictures of private body parts or sexually suggestive photos), has become so common that it is now officially a word, Spears said. Youth are aware that these images may get out, Spears said, but they do it anyway. Snapchat images do not go away, Spears said, although they disappear off the screen.

(Spears said that the National Center for Missing & Exploited Children is a resource for stopping the circulation of photos kids post of themselves online. www.missingkids.com)

Spears spent some time talking about smart phones, pointing out that various apps can easily be used by child predators. He specifically mentioned Airdrop, a function on iPhones that allows users to share files, photos, gifs or memes, and is another way for predators to contact a child, Spears said. (The function can be turned off in Settings on the iPhone.) He advised parents to check their children’s cell phones.

There is no longer “stranger danger,” he said, because it’s so easy for predators to pose as someone the child knows, either online or in person. He gave the example of Curtis Dean Anderson, who was convicted of abducting three girls, and murdering two of them. The other victim managed to escape. The survivor said he wasn’t really a stranger, because they would see him, and sometimes chat a little, every day on their way home from school.

Predators are always looking for new and innovative ways to reach our children, Spears said, so parents have to remain vigilant. “If you’re not searching your children’s phones, you need to start… You need to be inquisitive.”

He also called on parents to talk to their children about sex. “You know what,” he said, “Young adults; our teenagers are gonna have those conversations. You have to adapt, to answer.”

“Start with talking about reputation,” he suggested, and teaching kids to respect themselves.” Parents should also talk to their children about privacy, Spears. “How many people subconsciously post where they’re going?

“My message for parents: communicate,” Spears said. “You have to break down these barriers. These conversations are absolutely uneasy to have.” But, he pointed out, even a simple Google search for a slang name for sexual anatomy will return photos.

“Would you like to have these conversations,” Spears asked the room, “or would you like the internet to teach your children about the birds and the bees?”