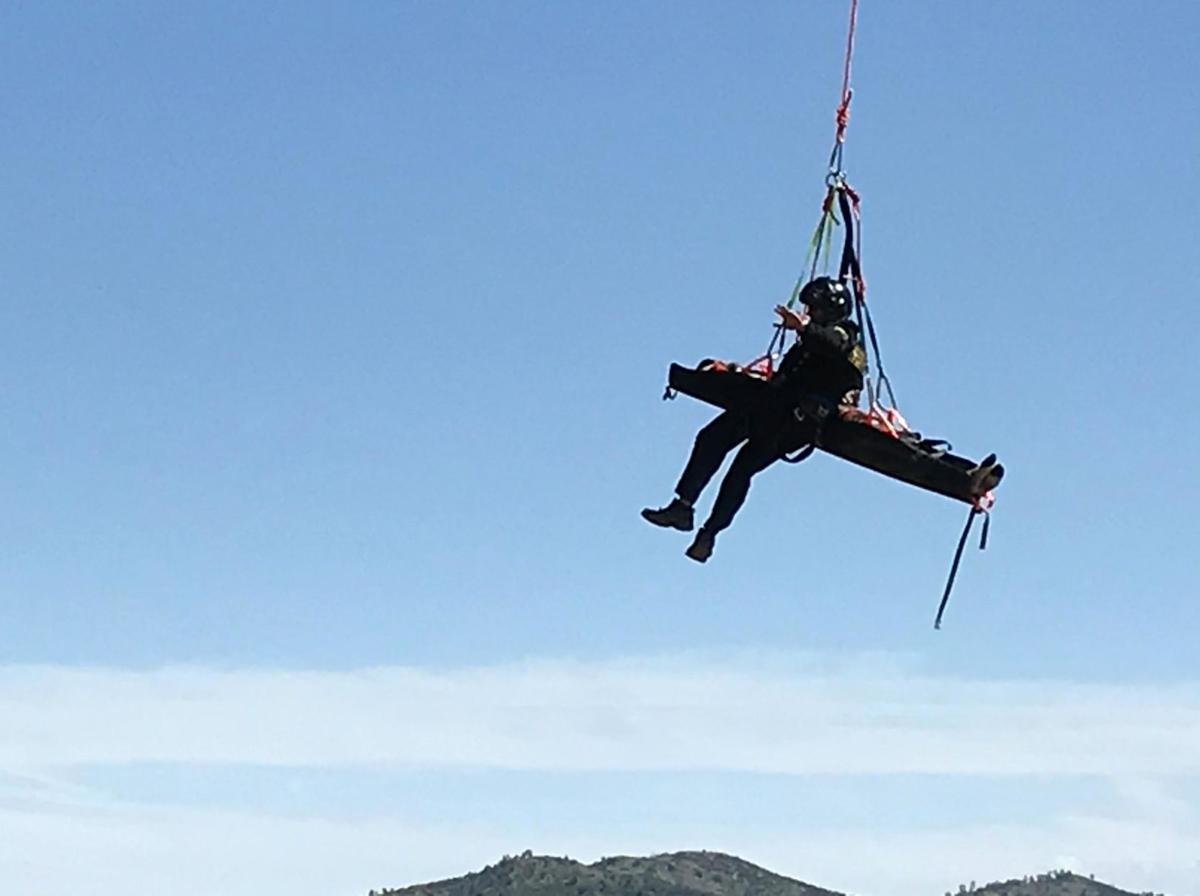 Detective Osmonson and an injured dirt bike rider are moved to an awaiting PHI helicopter on Sunday, April 15. 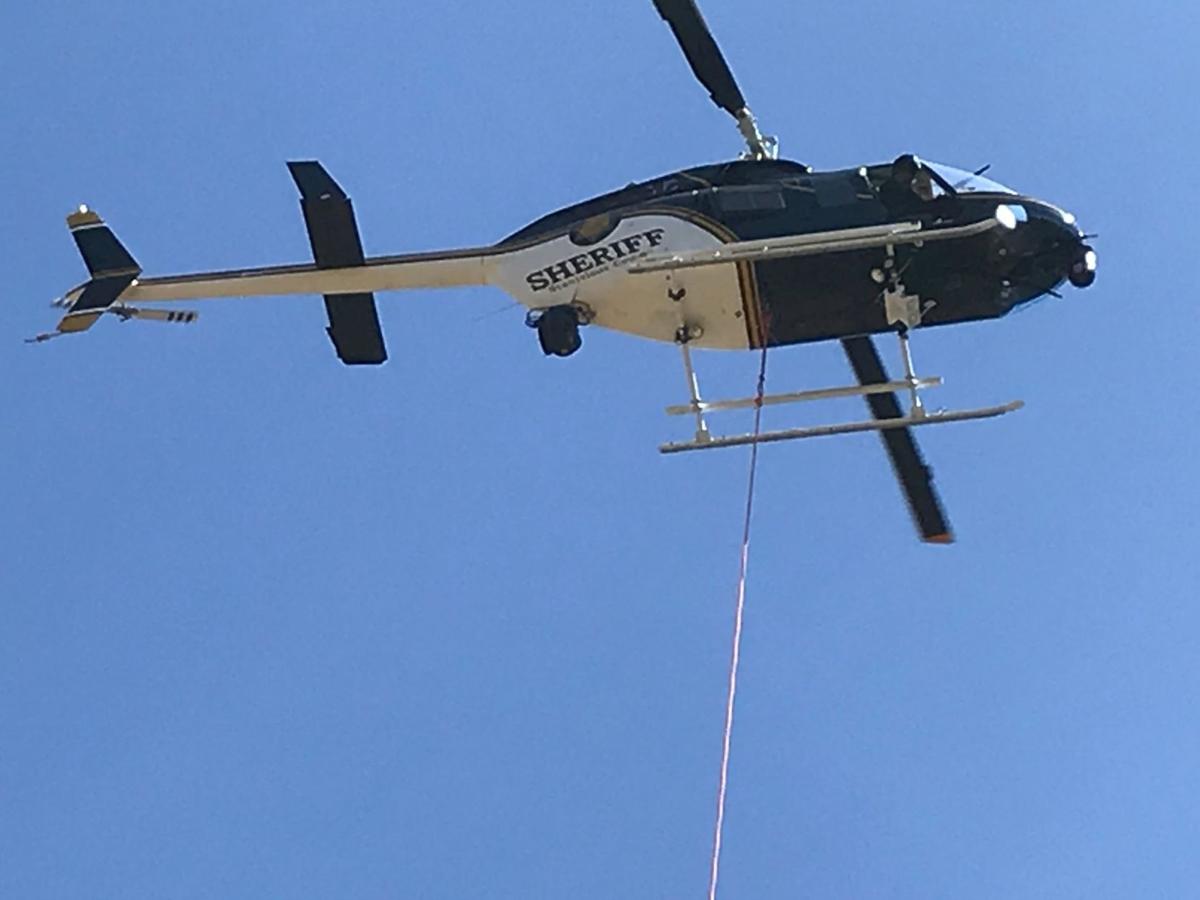 The Sheriff's helicopter, piloted by Deputy Malone, during the "long line" rescue operation in Frank Raynes Park on Sunday, April 15. 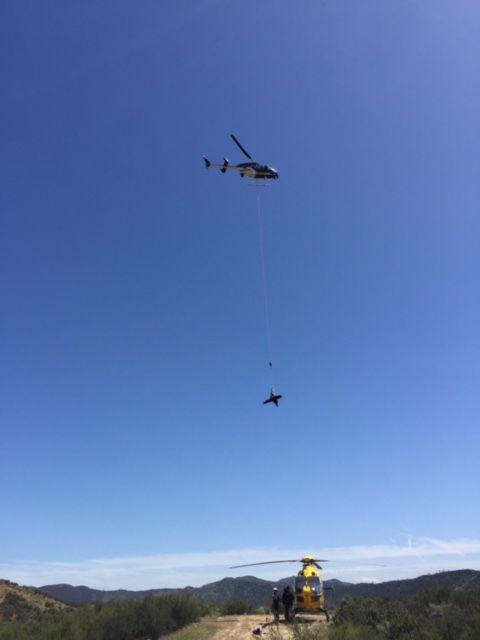 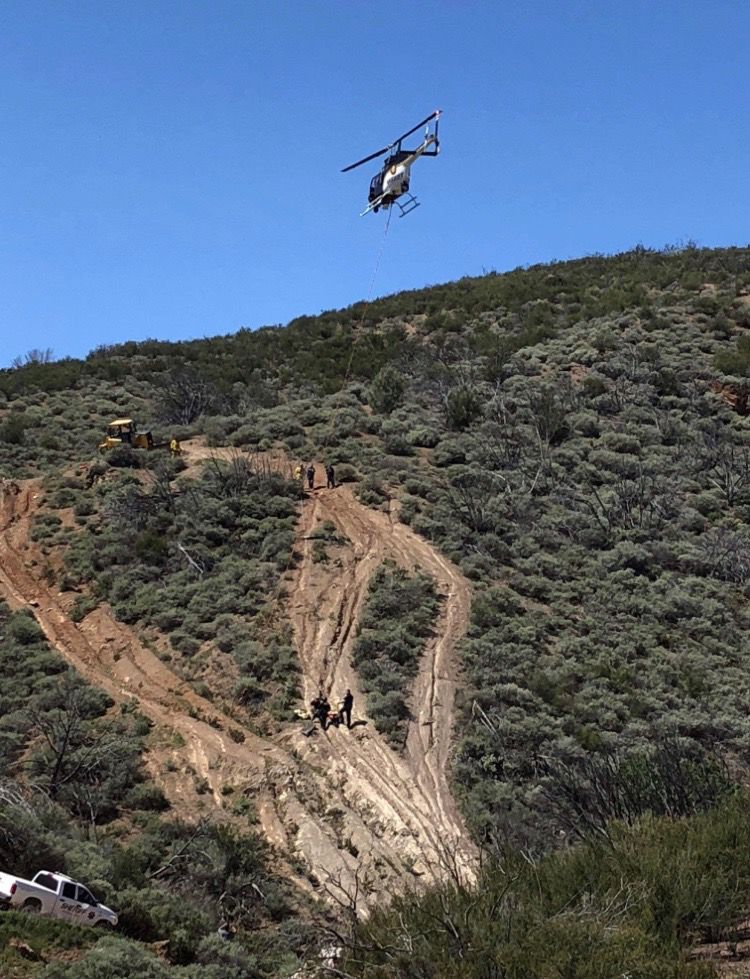 An aerial view of the dramatic rescue that took place in Frank Raines Regional Park on Sunday, April 15.

Detective Osmonson and an injured dirt bike rider are moved to an awaiting PHI helicopter on Sunday, April 15.

The Sheriff's helicopter, piloted by Deputy Malone, during the "long line" rescue operation in Frank Raynes Park on Sunday, April 15.

An aerial view of the dramatic rescue that took place in Frank Raines Regional Park on Sunday, April 15.

Area first responders pulled out all the stops in a challenging rescue operation in Frank Raines Regional Park on Sunday afternoon.

The rescue eventually involved over a dozen first responders from a handful of agencies, a bulldozer, helicopters from two different agencies – and a lot of rope.

The call came in around 11:30 a.m., after a dirt bike rider fell into what Patterson / West Stan Fire Chief Don Armario described as a ‘washout’ – a crevice, or natural drainage ditch in the ground. Cell service is spotty in the canyon, so the rider, whom Armario estimated to be in his 20s, activated an emergency beacon designed to provide latitude and longitude information to emergency personnel.

Similar equipment is used on boats and planes, and the personal version the rider was carrying might have saved his life. At a minimum, it made it far easier for emergency personnel to locate and rescue him.

He was also able to describe his injuries, which Armario said he didn’t believe were life-threatening. This information was extremely helpful to emergency medical personnel in preparing for the rescue.

Due to the unique challenges of sharing personnel and equipment to cover a relatively wide geographic range, Armario said, he has designated qualified personnel as on-call captains, who serve as incident commanders in situations such as the one Sunday. In this way, local emergency personnel are still available within city limits during a lengthy rescue or fire operation elsewhere.

West Stan volunteer captain Eddie Thompson served as incident commander on Sunday. On arriving at the scene, Thompson spoke with a Sheriff’s deputy and the maintenance worker for the area, whose knowledge of the terrain would be invaluable, as the rider was located “way off road,” Armario said.

According to the Sheriff’s report, the victim was located “on the side of a hill with extremely loose terrain.”

Emergency personnel are often called upon to use a combination of skill, knowledge and ingenuity, and this is especially true in a difficult situation such as this.

The entire operation was movie-worthy.

The Sheriff’s report indicated that rescuers first attempted to rig up a rescue rope system using a bulldozer, but the terrain proved too hazardous for this approach.

The Sheriff’s Air101 “Long Ranger” helicopter, piloted by Deputy Malone, then landed near the victim. Detective Osmonson, serving as Tactical Flight Officer, set up what the Sheriff’s report described as a “long line,” hooking himself to a rope, and the rope to the bottom of the helicopter.

Malone then maneuvered the chopper, with Osmonson dangling below, over the injured rider. Osmonson was lowered into the crevice, and with the assistance of emergency medical personnel on the ground, secured the rider onto a rescue board and prepared him for airlifting.

The deputy and injured rider were then carefully lifted from the ditch and flown about 600 feet to the PHI Air Medical helicopter, Med41, where emergency personnel tended to his back and leg injuries. The patient was then airlifted to an area hospital.

“With the extent of his injuries, it would have been pretty rough for him to go (to the hospital) by ground (ambulance),” Armario said.

Second in a week

The incident was the second time in less than a week that emergency responders have had to rig up ropes to rescue an injured person from a ditch: Patterson Fire Department personnel retrieved a construction worker who was accidentally knocked into a trench last Thursday afternoon. His injuries, according to Patterson Fire Chief Jeff Gregory, did not appear to be life-threatening.