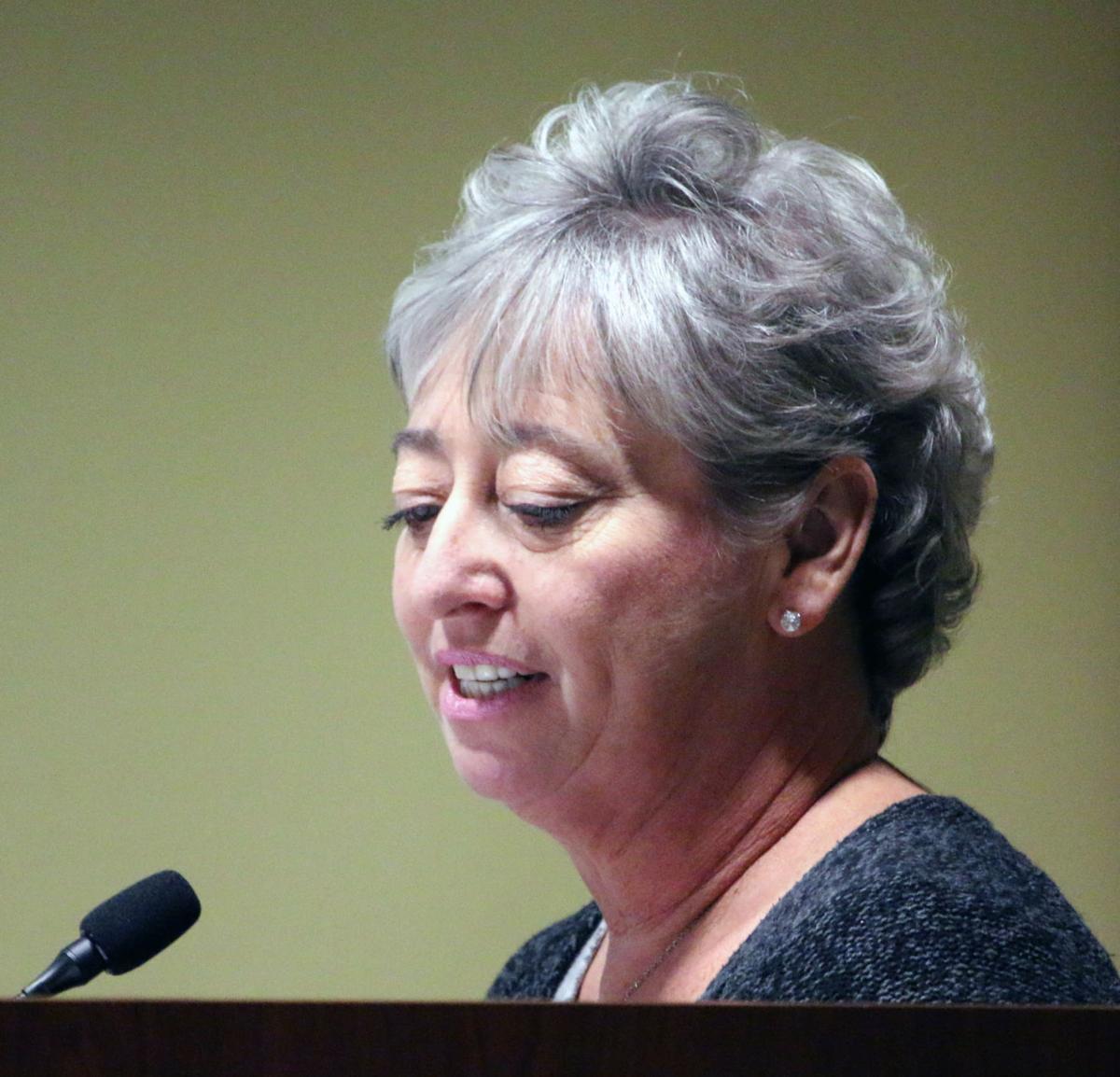 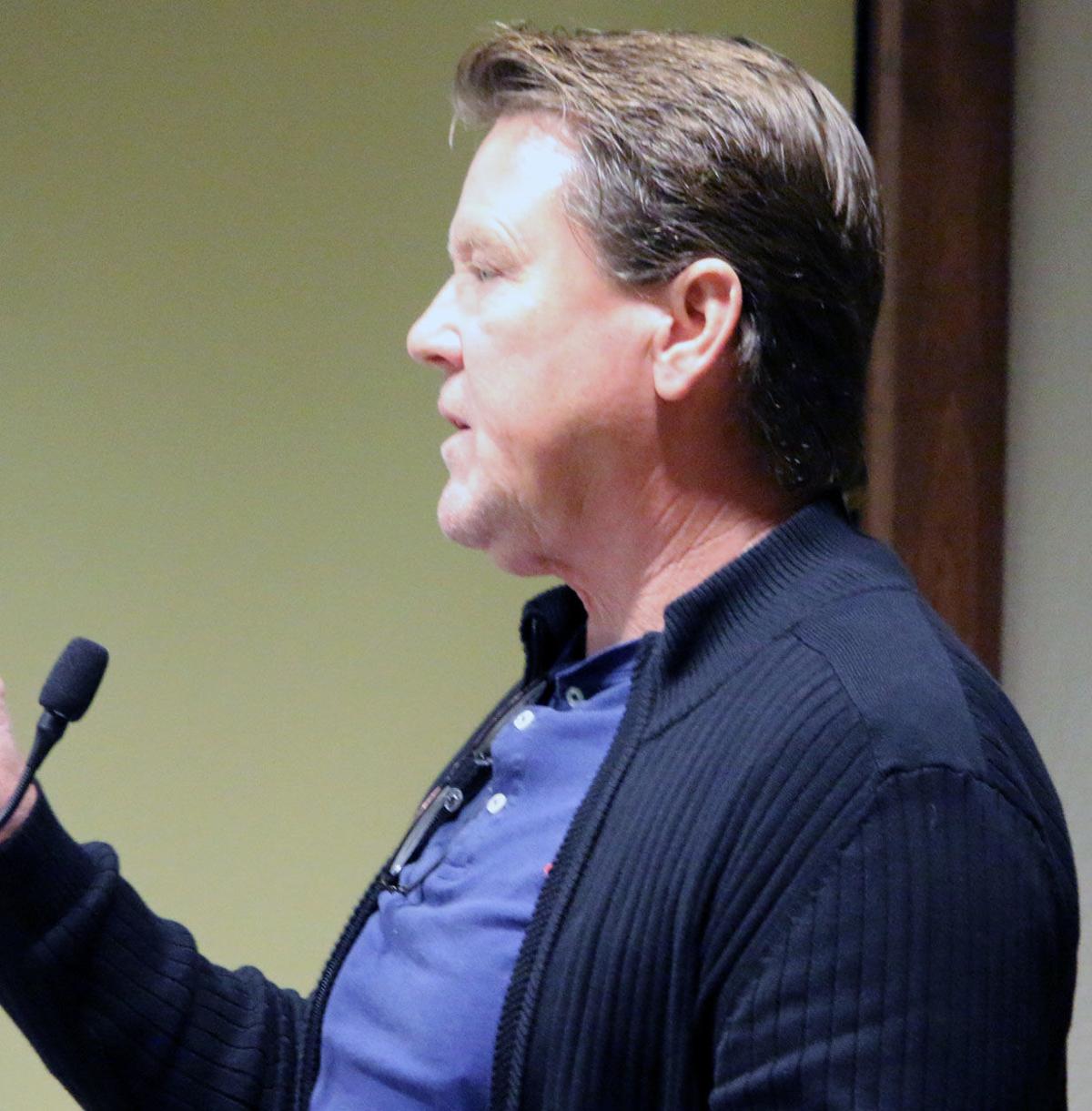 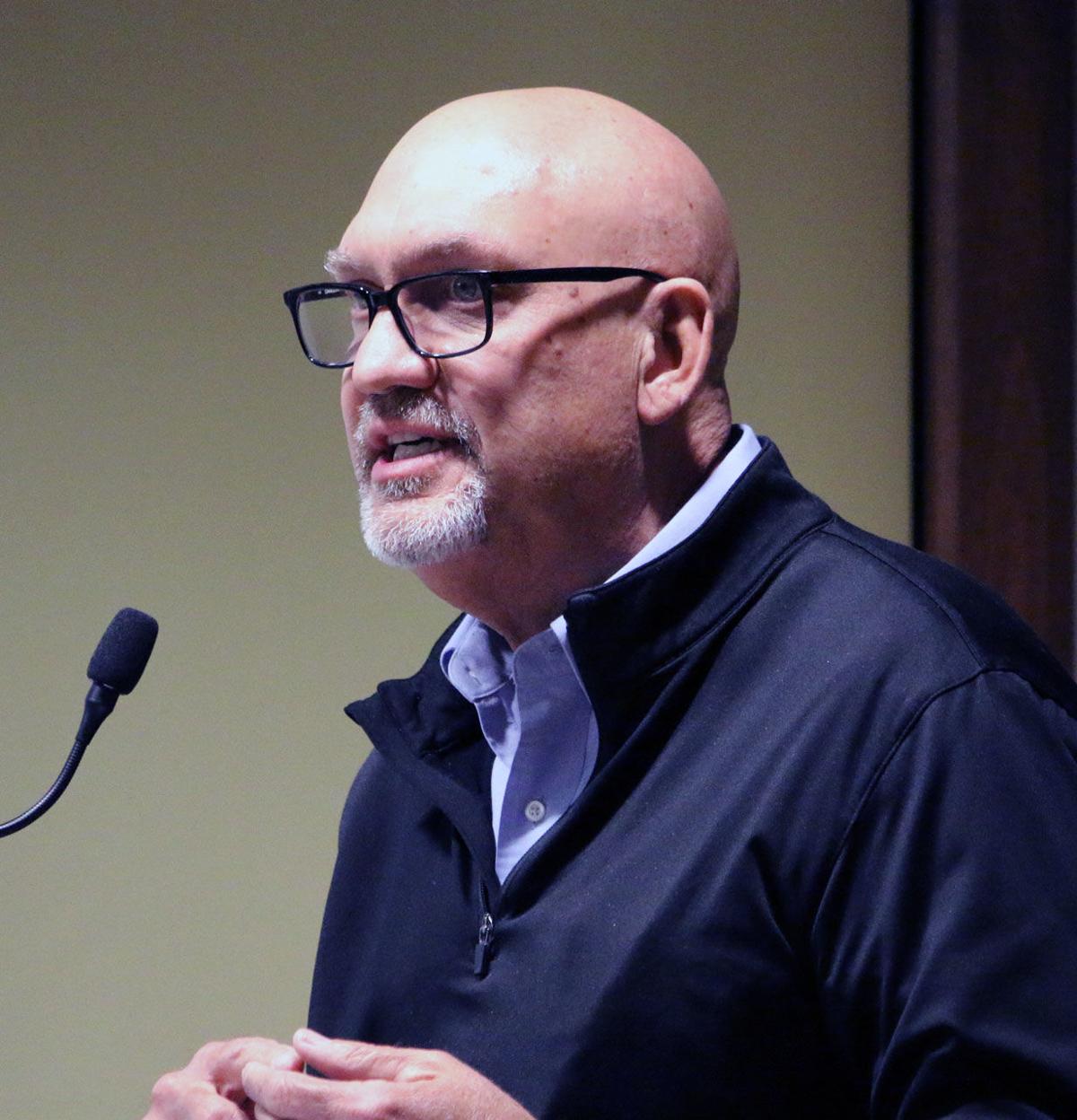 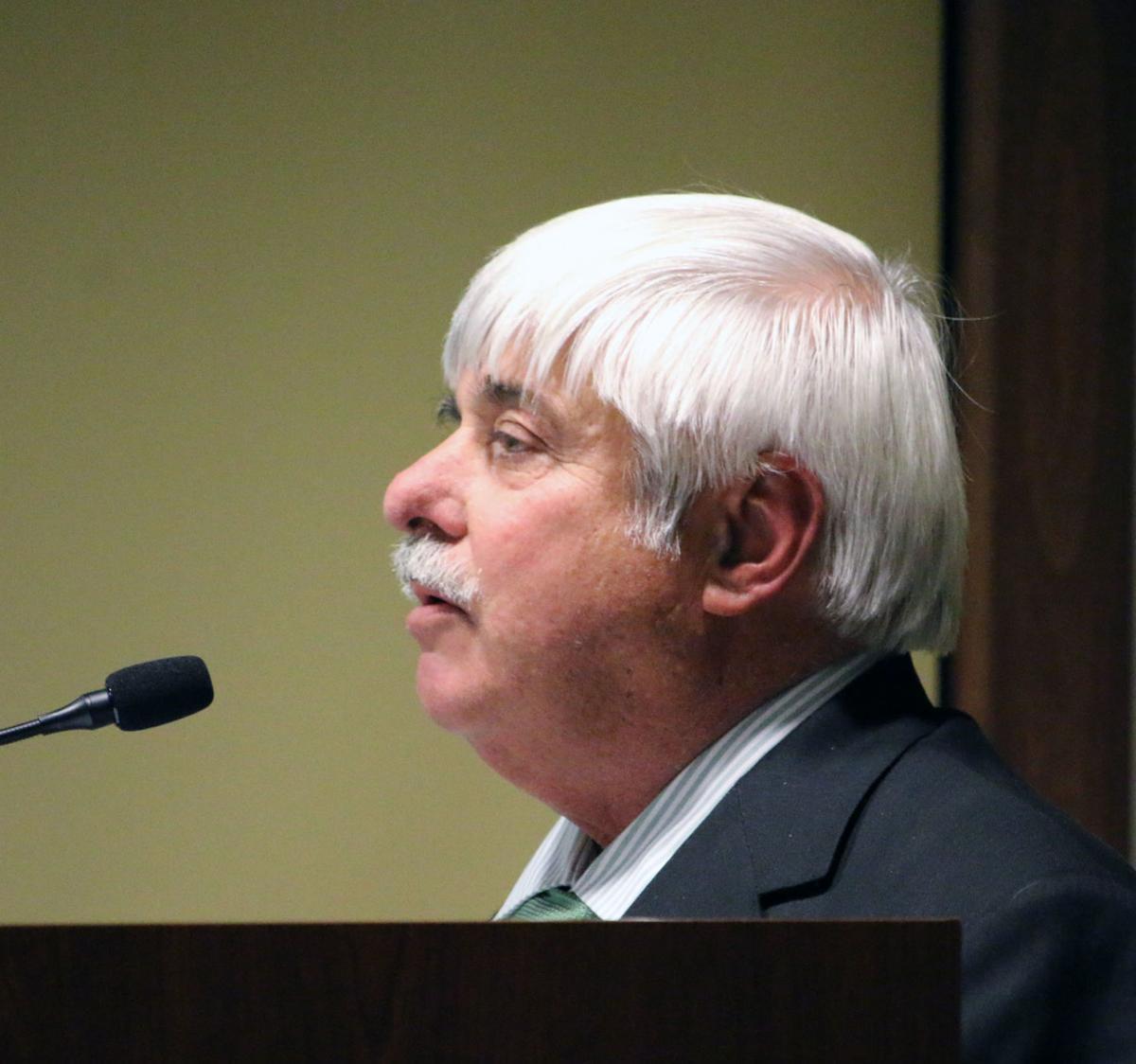 Opponents of the proposed Del Puerto Canyon Reservoir Project were again in attendance at last Tuesday’s City Council meeting, and spoke during the public comment period.

The proposed reservoir, she said, “would provide water supply benefits to agriculture and the environment, flood control and groundwater enhancement benefits to the City of Patterson, and also an opportunity for the expansion of public recreational opportunities.”

In late 2018, Hansen said, leadership of the water contractors in the area decided to invest in studying ways to enhance “our ability to capture supplies when they are available and when they are abundant, in order to have them for times when they are not.”

“With changing climate variables, the predictions that snowpack will no longer be California’s reservoir, and more frequent and wetter storms, this is not an unjustified exercise that our agencies are pursuing. It’s a commitment to the future of this region.

“Our boards will make informed decisions about the proposal based on the best environmental, technical and financial information being developed by experts. All of the impacts will be considered, as well as all of the input we have, and continue to receive from interested parties.”

Addressing the council, she said, “We received comments on the draft EIR, and are taking those, along with the others we have received, and are developing actions and responses based on this input. We know that sometime in the future, you as a government body will be asked to concur that your planning goals can be consistent with those of our agency, and that the benefits of our project, to the city and the region, are worthy of forwarding.

“It is my sincere hope that you, in your role as community leaders, will take the time to fully review the information available about our proposed project, and will respect the ability of our agencies and staff to bring forward all of the information necessary for our governing board and your council to eventually make informed decisions. I give you my word that the information you are provided will be facts.”

Former Mayor David Keller, who is a licensed real estate broker, said that if the dam is completed, part or all of the city will be in a dam inundation zone. “So to say that the City of Patterson should not be included as a responsible agency when the city, partially or all of it, will be in a brand new natural hazard (zone) for the citizens of Patterson is evading facts and the truth… We do not have a dam inundation zone in Patterson; when the dam is created, we will have it. So, therefore, the City of Patterson, in my opinion, should have been included as a responsible agency.”

Executive Director of San Joaquin River Exchange Contractors Water Authority Chris White emphasized that the project plans ahead for the cities. “We manage our groundwater conjunctively with our surface water supply, and in partnership with our cities, up and down the valley. My message to you here is we have partnered with our local communities… We know what it takes for cities to manage their groundwater.”

One of the objectives, he said, is south of Delta water storage, along with flood control and flood protection on the creek itself.

“If we build this facility, we will operate it such that flood flows will be reduced significantly. It will actually reduce the 100-year flood plain to within the creek itself,” he said, and will increase peak irrigation supplies and improve groundwater resource management, the latter of which he said was “very important,” both groundwater for the city, groundwater for local ag.

White cited a study done after the Sustainable Groundwater Management Act (SGMA) was passed. “When SGMA goes into effect in 2040, it is estimated that the water shortage from not being able to pump these deep aquifers will cause a million acres in the valley to go out of production. We need to be proactive, so as to avoid that locally, and this is one of the projects that we’re looking at, in order to avoid that.”

White said that an earthen dam is “the type of facility we build in a seismically-active area.”

He also emphasized that the city will not be involved financially in the project.

“It’s about a $500 million project that is taken on by the districts. This is not something that gets charged to the city in any way, shape or form,” he said, adding that the districts are “out looking for funding,” through the Water Infrastructure Improvements for the Nation (WIIN) Act, and other sources. “This is something that is… paid for by the beneficiaries of the project.”

White explained how the reservoir could help groundwater recharge, by holding water before metering it out “slowly, over a long period of time, causing much more recharge to go into the aquifer. That’s the basic plan for releases, and that would be a huge benefit to the city.”

Addressing the safety concerns that have been raised, he said, “We are also committed to this:

Helen with Congressman Josh Harder’s office also read a statement on his behalf, in which he encouraged cooperation among those who support the project and those who are opposed. “We have to make sure it’s done right. That’s why I worked hard to secure the federal funding to study the siting and environmental impact of this proposal. I strongly believe we have to make sure all folks’ voices are heard. All local stakeholders are welcome at the table, and hopefully, we’re working towards breaking ground on a project that’s right for our valley. We all want a safe, prosperous valley. And to get there, we have to be willing to work together in good faith, to create a project that everyone is happy with.”

Supervisor Jim DeMartini also spoke, pointing out that the population of California doubled over the last 47 years, increasing from 20 million to 40 million, with only a one percent increase in water storage capacity.

DeMartini mentioned water stored in the San Luis Reservoir, but said “it’s not a real reliable source.” The district “has the right to take it out later,” he said, “and that’s if there’s no pumping restrictions or environmental reasons to shut the pumps off, which happens all the time.” He also pointed out that water stored in the reservoir would reduce agricultural groundwater pumping. “When you have a five percent allocation, or zero percent allocation, where else are you gonna get the water? It’s gonna be through groundwater pumping.”

He added that neither Stanislaus County nor the City of Patterson would be paying for the project, “or anybody else. This project is paid for by the water users of the Del Puerto Irrigation District,” and the other affected areas.

“This project makes sense, and the County supports it,” he said. He then read a letter of support from the Stanislaus County Board of Supervisors.

Stanislaus County Registrar of Voters Donna Linder announced that there will be a satellite office here in Patterson, which will be open the weekend before the election, 8 to 5 on Saturday, Sunday and Monday, March 1 to 3. Voters from anywhere in the county can register to vote or obtain a ballot. The satellite office will also be open Tuesday, March 3, from 7 a.m. to 8 p.m.

There will also be a ballot drop box at City Hall.