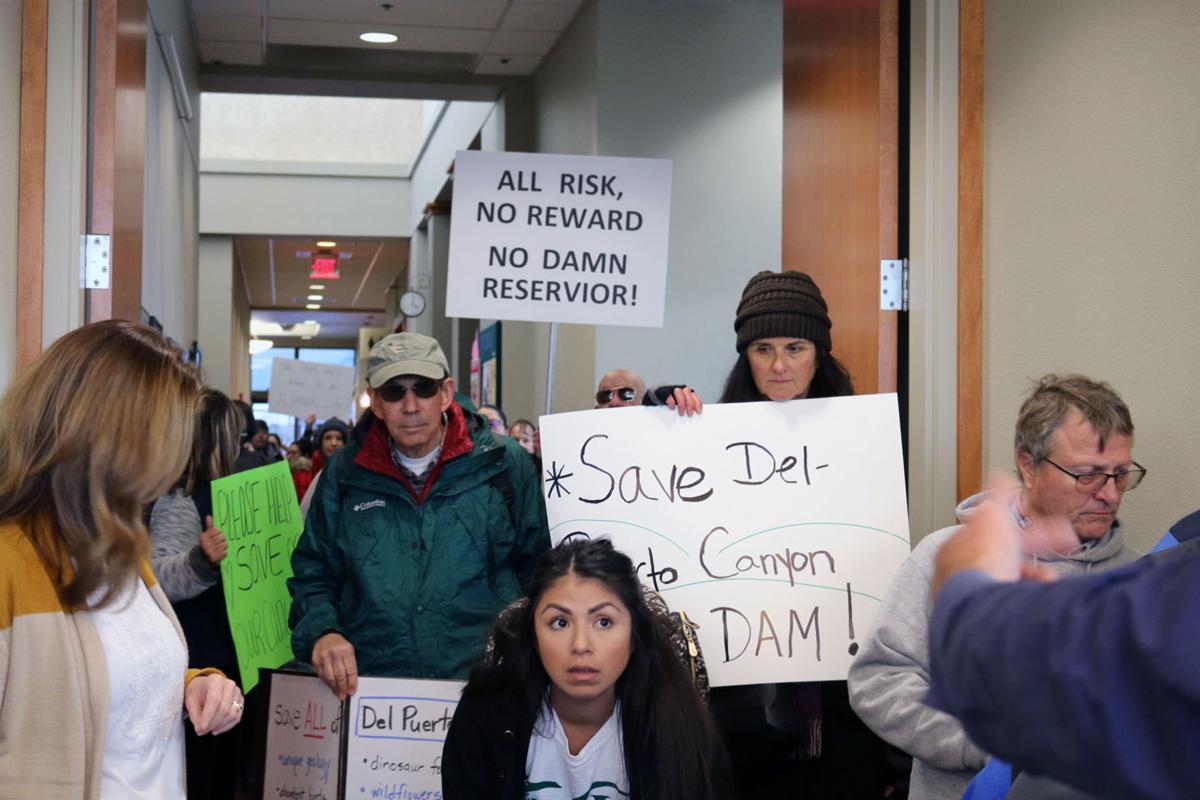 Protestors against the dam project fill the hallway before the Del Puerto Canyon Reservoir meeting on Wednesday, January 15. Every person who stood at the microphone spoke against the project. 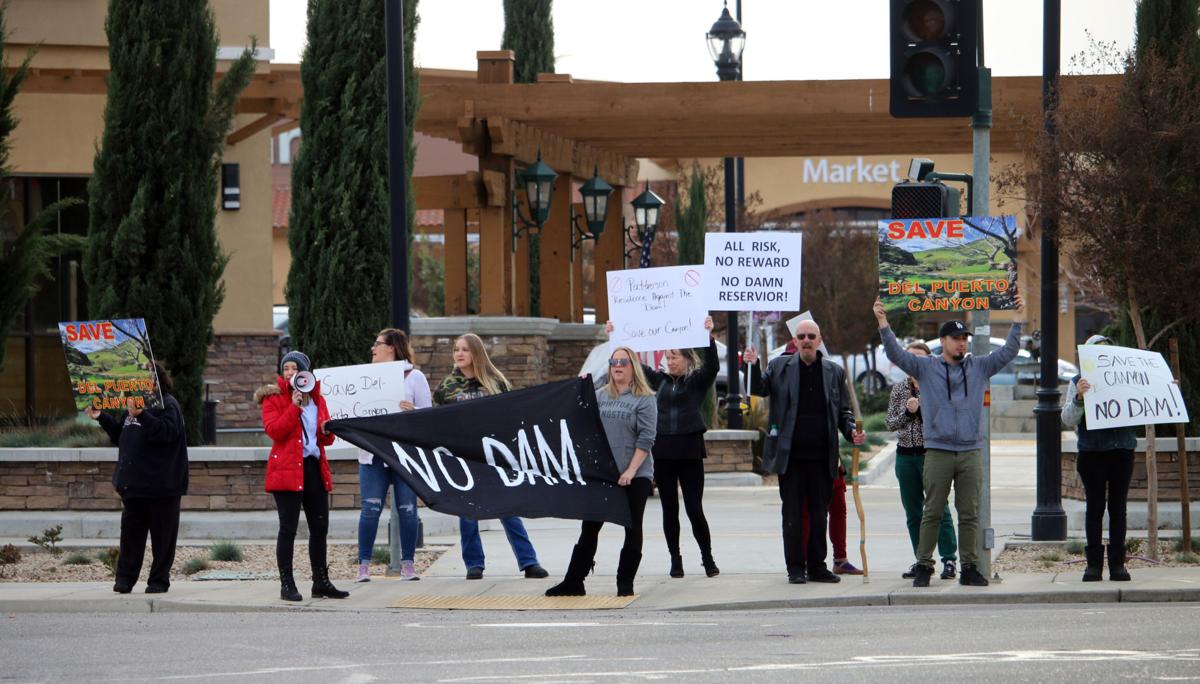 Some of the protestors at the corner of Sperry and Ward avenues before the public meeting on Wednesday, January 15. 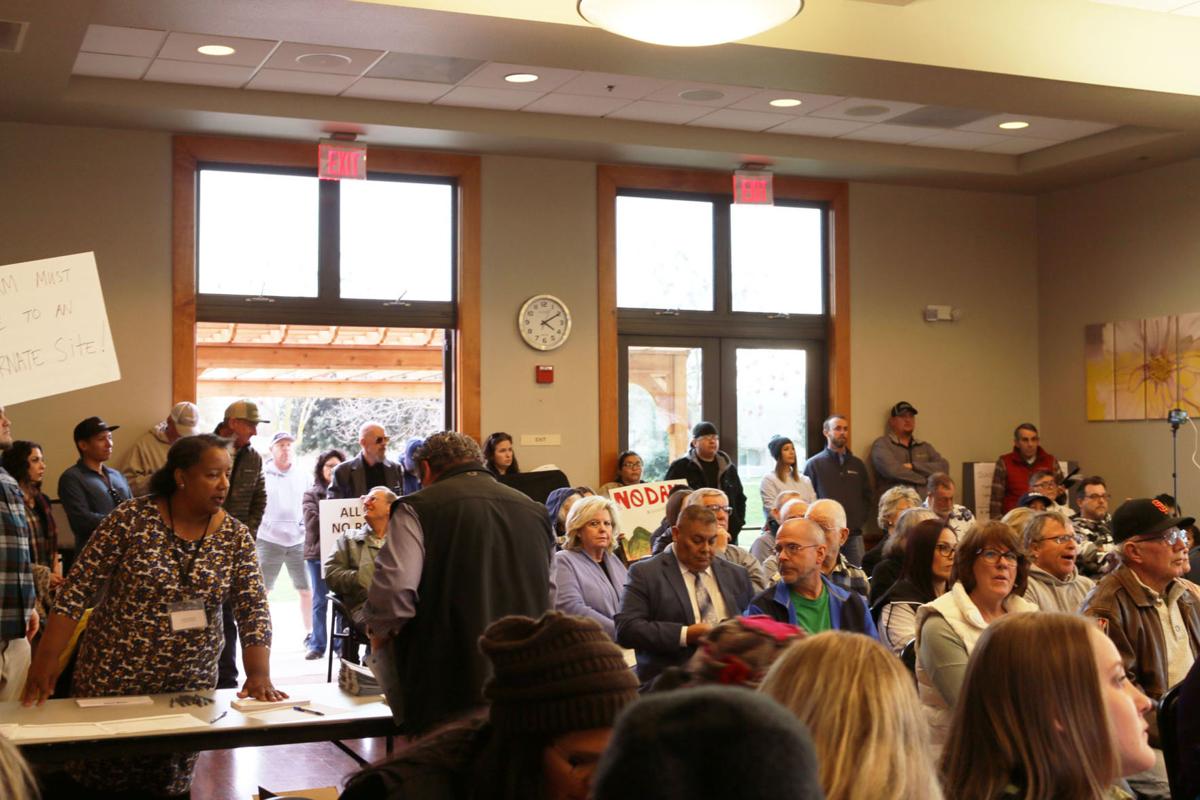 Part of the audience assembled for the public meeting on the proposed Del Puerto Canyon Reservoir project on Wednesday, Janaury 15. Former mayor Luis Molina, center, attended the meeting, which was standing room only.

Protestors against the dam project fill the hallway before the Del Puerto Canyon Reservoir meeting on Wednesday, January 15. Every person who stood at the microphone spoke against the project.

Some of the protestors at the corner of Sperry and Ward avenues before the public meeting on Wednesday, January 15.

Part of the audience assembled for the public meeting on the proposed Del Puerto Canyon Reservoir project on Wednesday, Janaury 15. Former mayor Luis Molina, center, attended the meeting, which was standing room only.

Emotions ran high during the public meeting for the proposed Del Puerto Canyon Reservoir dam project last Wednesday night, with most speakers visibly upset, and a few struggling to maintain their composure.

The meeting was preceded by a group protesting the project at the corner of Sperry and Ward avenues, holding up large signs and chanting. The group reconvened in front of the Hammon Senior Center, where the meeting was held, and subsequently stood in the back of the room through the standing-room-only meeting.

The purpose of the meeting was to take public questions and comments for items to be addressed in the final version of the Environmental Impact Report (EIR), and a court reporter was present to record the comments verbatim.

Project proponents did not answer questions or engage in discussion.

Modesto Junior College Professor of Geology Gary Hayes said he’s taken “hundreds and hundreds” of students to the canyon over 30 years. He likened to the canyon to Yosemite, saying he believed that if this region had been under federal control, it would have been considered for a national monument, because it’s “one of the few places in all of California where you can literally drive from the earth’s surface into the earth’s mantle. Going up the canyon, you pass through 25,000 feet of marine sediments – five miles of marine sediments. And then you pass into the ocean crust… Rocks that are from 30 and 40 miles down in the crust,” are in the upper part of the canyon, he said.

“It is a place of national significance; geologists have been exploring the canyon for years; a lot of research has been done.”

Additionally, he expressed concern about “the instability of the slopes throughout the reservoir.”

He also said that the EIR “failed to mention” that the first dinosaur bones found in California were discovered a few miles above the inundation zone. “I’m disturbed that such a significant site would be completely ignored in the planning for this reservoir,” Hayes said.

Elias Funez, former Patterson Irrigator editor, former City Planning Commissioner, former Parks and Recreation Commissioner and member of the 2012 General Plan Advisory Committee, spoke on the lack of public awareness of the proposed project. “What’s been amazing for me to understand, while I’ve been talking to people over the past few days, is that 90 percent of the people that I’ve been talking to have had no idea about this project.”

Funez said the area was included in the City of Patterson’s General Plan Update, and asked, “Why would you choose to build a dam where the city plans to expand and grow? During the conversation, you must have discovered that the city has drafted documents that show the area to be preserved as a natural park as part the draft 2012 General Plan update of the Parks and Recreation Element. The city Parks and Rec commission identified that area as a special sensitive species habitat, and an outdoor amphitheater as well as hiking, biking and equestrian trails were planned, should development occur in that area.”

Funez also mentioned that “some project proponents have been calling some of our bosses and complaining about some of us speaking out. That type of intimidation, typical of Patterson politics, has to stop.”

Asked about that concern in a phone interview on Monday, Del Puerto Water District General Manager Anthea Hansen said, “I think that’s a matter between the employer and their employee,” but added that she had seen the school district’s name “on several pieces of correspondence,” so she “called only to reach out to the superintendent to see if he needed more information on the project.” He had already attended a presentation, she added.

Nancy Jewett, who said she moved to the valley about 20 years ago, described the canyon as a “magical, magical place that has so much in it.” She called the proposed dam “a heartbreak, and an assault on an incredibly valuable, irreplaceable resource. And I don’t understand how it could have happened so fast,” she added, “people are just finding out about it.”

Creekside Middle School student Cassandra, 13, said, “As I am really young, I don’t really get a chance to be a part of the community, and to speak up… It really distresses me, about the dam, that this beautiful wildlife that’s out here… I don’t feel like this is a good idea.”

U.S. Geological Survey (U.S.G.S.) Field Coordinator Patrick Kolar, listed as a co-author on a USGS report entitled “Estimation of Occupancy, Breeding Success, and Abundance of Golden Eagles (Aquila chrysaetos) in the Diablo Range, California, 2014,” said he has been monitoring golden eagle territories in the area. “Based on our research, this is the densest breeding population in the world.” He attended the meeting to provide information, he said. Adding that he was “not advocating for or against the reservoir project, but I wanted to make sure that you knew that we have breeding information on breeding golden eagle pairs within the project area, and actually, some of which have been monitored for 25 years or so, intermittently.”

Former mayor David Keller, in an Op-Ed piece submitted to the Patterson Irrigator, pointed out that the City of Patterson is not listed as a “responsible agency” in the EIR. (Please see accompanying article.)

In an email on Monday, Hansen said, “Our position has been that the City isn’t really a responsible or trustee agency for this project. The EIR does state, however, that ‘Although the Project Partners receive intergovernmental immunity from local planning and zoning ordinances, efforts will be made to maintain project consistency with these ordinances as much as possible.’ So we have considered consistency with land use plans for determinations of impacts, both in the City and the County, as discussed in our document.”

City Manager Ken Irwin said Tuesday that the city’s legal counsel confirmed that the city is not a “responsible agency” for this project; “there is no approval from the city needed for the construction of the dam.”

Hansen also pointed to California Government Code Section 53091(d), which states “Building ordinances of a county or city shall not apply to the location or construction of facilities for the production, generation, storage, treatment, or transmission of water, wastewater, or electrical energy by a local agency.” 53091(e) provides the same exemptions to zoning ordinances.

Deadline for comments is 5 p.m. this Monday, January 27. Comments can be delivered to the Del Puerto Water District office at 17840 Ward Avenue, or mailed to the district at: