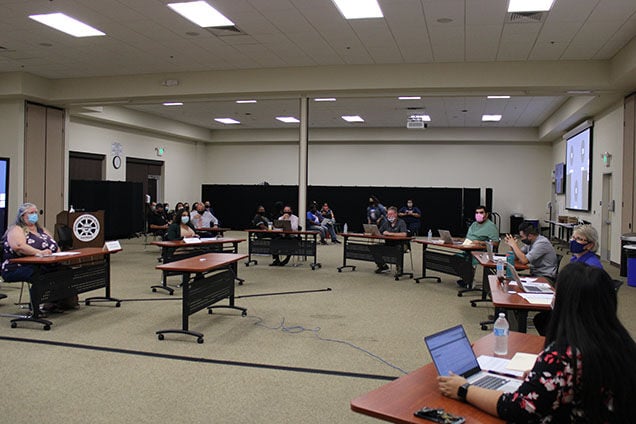 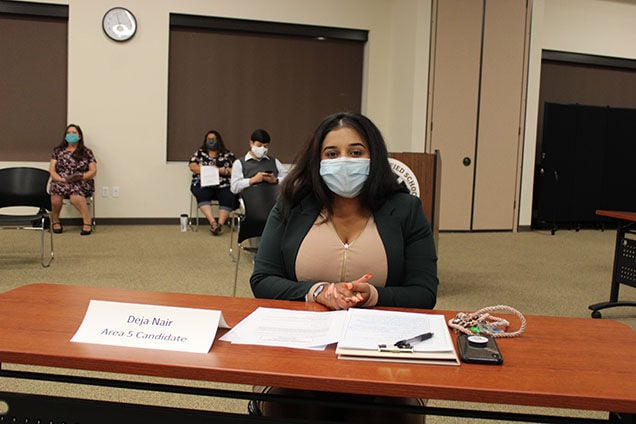 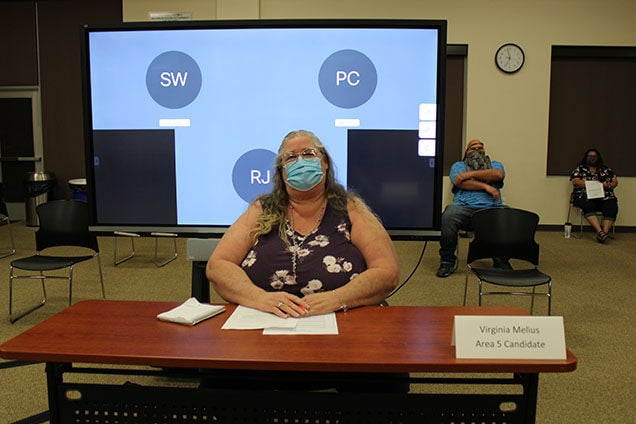 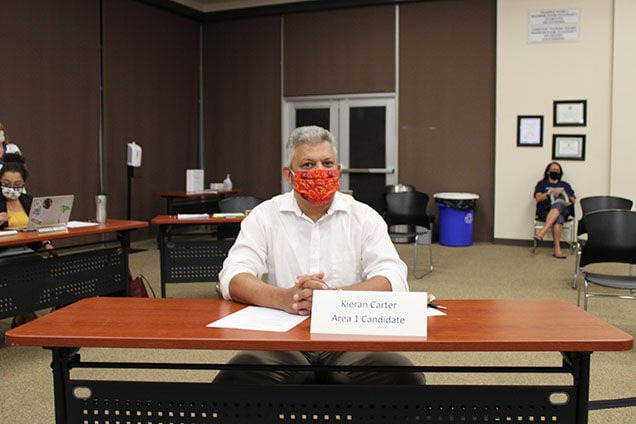 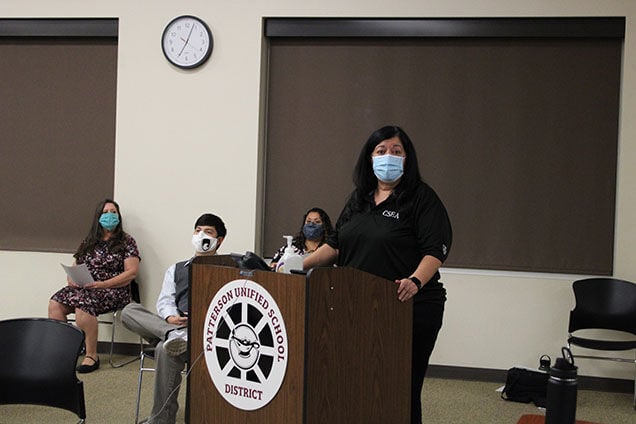 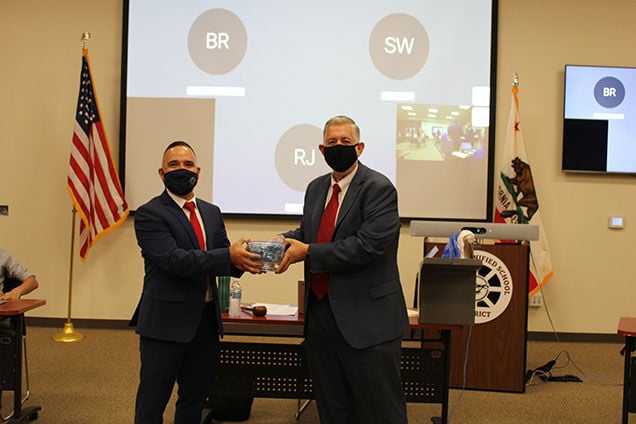 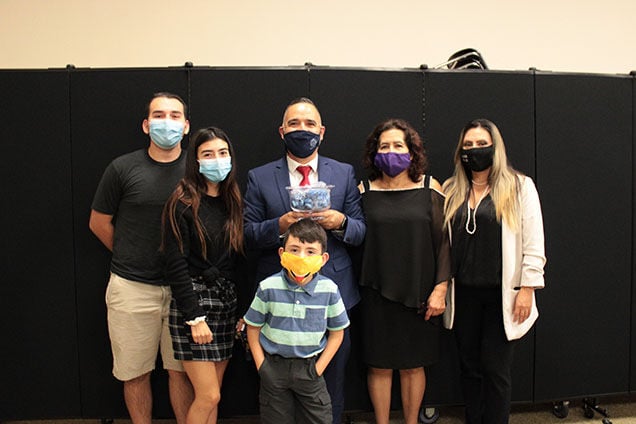 Continuation/Educational Options Administrator of the Year Jose Sanchez with his family. 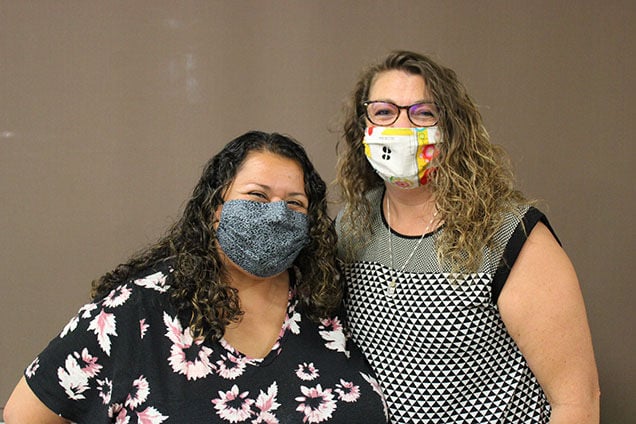 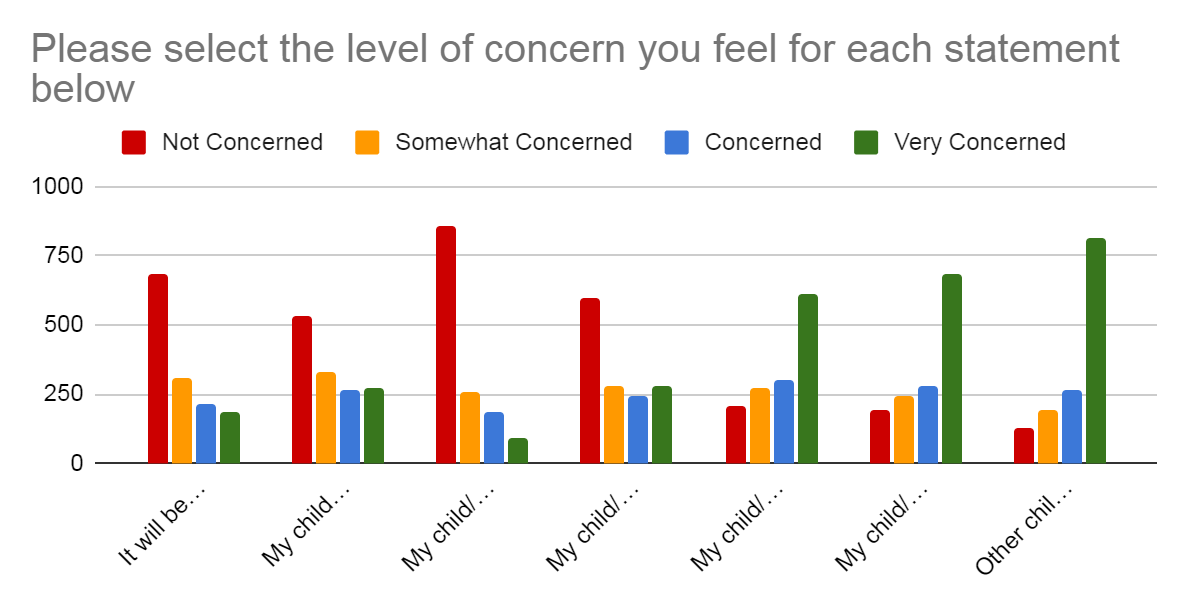 Continuation/Educational Options Administrator of the Year Jose Sanchez with his family.

Monday night’s school board meeting lasted three hours. The agenda was stacked; most notably was the item to approve resolution 10192020-A, Reopening Plan, and Return to In-Person Instruction.

There were more than 20 public comments, lengthy discussions, and in the end, a split vote that sent district administrators back to their offices to work on the proposed hybrid schedule with guidance from board members.

Christina Garcia of CSEA was the first to speak. She reminded members of their duty as elected persons to represent their constituents and speak on behalf of all children, not just their own. She went on to inform Trustees about a safety concern she has due to a “misunderstanding” that led to her cohort classroom not being sanitized after the previous day’s class.

Cohorts were set up at Northmead, Grayson and Walnut Grove to meet the needs of those families who are truly lacking internet access of any kind. With guidance from Joe Silveira, she contacted custodial supervisors who immediately took care of disinfecting the classroom.

“I know that we’ve signed an MOU with the district with an understanding of the responsibilities we have right now under modified jobs. But the district also promised that that room would be sanitized. Mainly, most important to me, the children. I could very well bring something to those innocent children. So, one little mistake like that can cost us a lot…We have to be on our A-game if we plan to reopen these schools. Nothing can be missed.”

Unfortunately, District Five Trustee Jose Reynoso was absent from the meeting and did not vote. His vote would have acted as a tie-breaker since the votes were split three-three.

The dissenting votes were in favor of delaying the reopening of school sites until after winter break and were specifically concerned with the aspect of the schedule that allows for all elementary students to be brought back to campus in such a short amount of time.

Segoviano said, “We need to decide what is safe. The red tier is not safe. We know that.” Not wanting to open classrooms too soon and potentially creating a spike in COVID-19 transmissions is a major concern for approximately 40% of PJUSD’s stakeholders. “I think this specific plan; we are trying to take leaps instead of walking.” Segoviano held his ground, reiterating, “Someone could possibly die. I don’t want that on my mind. I don’t want that on my conscience.”

The assenting votes were just as strong, with Cross and Bays arguing that decision making should not be fear-based as well as reminding other board members that the majority of stakeholders want to return to in-person classes.

“If you do what science tells you to do, it’s not inevitable you are going to get this,” Bays said about contracting COVID-19. To deny the stakeholders that want to resume in-person classes is against the wishes of 60% of the survey respondents. “For the students that don’t want to come back, they can do remote learning, but it’s not fair to the students who want to come back,” Cross said.

Superintendent Dr. Phil Alfano attempted to put members and stakeholders at ease, reminding them that the schedule could be adjusted to alleviate their concerns while giving the district, staff, and parents ample time to come up with site specific plans and child care.

“We will never come up with something that is going to make everyone happy. That would be a fool’s errand in this environment,” stated Alfano. “This was done collaboratively,” he said about the schedule, reminding the board and stakeholders that the schedule was developed with input from teachers, employees, and parents. “There will be positive cases. The goal is mitigation. By only having half the students here for a prolonged period of time, we will have a pretty good idea by January, where we stand as a county.”

“I just feel like the ball needs to get rolling,” Bays said about making a decision on the schedule. She also reiterated her concerns about the widening education gap, noting that the longer students are out of the classroom, the further behind they fall.

The resolution to adopt the schedule was not approved. The district was instructed on what the board would like to see changed. Alfano felt comfortable that he understood their concerns and agreed to bring back a revision at the next meeting scheduled on Nov. 2.

At a special Board meeting held on Oct. 15, Alfano presented PJUSD Board members with the results of the parent survey that was sent out by the district on Oct. 6.

The survey was meant to gauge the community’s inclination in regard to returning to in-person classes.

PJUSD was granted a waiver that would allow TK-sixth grade (PJUSD’s plans are to include sixth-grade students in the middle school plans, not elementary), students to return to in-person instruction while Stanislaus County remained in the purple or widespread tier, the School Board is responsible for guiding the district in their reopening plan.

School Board members considered community stakeholders’ opinions, including parents, students, staff, and other community members, to make balanced decisions that represent the community’s desires and are in students’ best interest.

Three weeks later, on Dec. 7, cohorts of third, fourth, and fifth-grade students would then be brought onto campus in a similar phased plan consisting of blended learning until Jan. 4, when in-person classes would begin.

Small cohorts in this hybrid or blended schedule give students and staff an opportunity to reacclimate to their new school routines as well as mitigate any potential spread of COVID-19.

Alfano encouraged the board to come to a consensus so that planning could begin.

“If we used case studies to close schools, we should use the same scientific data to reopen.” He also said, “These are not easy decisions. We do have to have some kind of plan. Whatever the board recommends.”

Of the 1,401 parent survey responses, 41.9% do not want their students to return to school. Of that figure, 33.5% do not feel comfortable with in-person classes returning before a vaccine is developed and administered. The remaining responses are parents who plan to homeschool or seek other online/independent study options.

Of the 187 responses received, 62.6% of the teachers wanted to return to in-person teaching when public health guidelines allow it. That figure includes 15.5% that wish to return immediately.

Of the 187 responses, 35.3% did not feel safe to return to in-person teaching until a vaccine has been developed and administered. The remaining 2.1% plan to request to teach Independent Study for the remainder of the school year.

Christina Garcia, President of California School Employees Association, also spoke to the board members about CSEA members’ concerns in regard to reopening.

Of the 372 employees surveyed, 105 do not feel safe to come back to campus for in-person instruction. Employee concerns were very similar to previous responses. Garcia reported that many employees were concerned about students’ ability to follow masking protocols. Another concern from some part-time employees related to the potential reduction in pay due to only working a partial schedule. They had previously been assured that they would not experience financial hardship. Although there was a similar percentage of employees who felt unsafe returning to campus, she told board members, “We all have our own opinions, our own beliefs on this pandemic. At the end of the day, number one, our children are first. We gotta do what we gotta do.” Implying that employees would return to campus if they approved the schedule.

Garcia also relayed her experience as part of a cohort classroom during the week. She spoke highly of Principal Tiffany Jones, saying all PPE that was needed had been supplied. She was grateful for the opportunity to be involved.

Kitty Vossekuil and Jose Reynoso will be vacating their Trustee seats at the end of this year’s term.

The three candidates were briefed by President Bays. Each current board member present would ask them questions, after which they would be called on randomly to answer. She instructed them that there were no right or wrong answers.

Candidates were asked a series of questions about why they wanted to serve as a Trustee, what experience they had that qualified them to be Trustees, how they would approach conflict resolution, what they believe the district has done well or not.

District 1 candidate Kieran Carter is in a supervisory position for a manufacturing company. His work history includes employee supervision and managing a multi-million dollar budget. He believes that all decisions should be based on what’s best for students first, followed by the district and then the community.

District 5 Candidate Virginia Melius has a long history of working among teachers and students while involved with Apricot Valley’s PTO. She believes that experience has helped her develop good communication skills and the trust of the community. She also has business management experience, including payroll. She believes that students should be the first priority for all decision making and that a strong community presence is important for developing relationships between stakeholders, the district and the board.

District 5 candidate Deja Nair is a product of Patterson Unified School District. She currently works for the City of Patterson and has experience working with the City’s budgeting and staff, which she believes has improved her communication and management skills. As a previous Patterson student and with siblings currently enrolled in the district she believes she has a better understanding of what the students are experiencing and is more relatable to those in her district.

Del Puerto High School Principal Jose Sanchez was recognized during the board meeting as the recipient of the California State Association of California School Administrators Continuation/Educational Options Administrator of the Year for the state of California. Sanchez thanked the board, district and Alfano for “his encouragement to seek professional development.” Sanchez dedicated the award to his mom, his wife and family. “Even though I always wanted to be a professional baseball player, I never made it, but this is as close as I can get to an MVP!”

Katherine Molina has been a PJUSD teacher for 18 years and currently teaches third grade at Apricot Valley Elementary. She has previously used the website www.donorschoose.org to crowdsource funding for robots and flexible seating for her students. Recently she set her sights on a book vending machine and used the donations based website to raise over $5,000 to cover the purchase cost. Donors Choose also selected Molina to act as a mentor for other members who used the site.