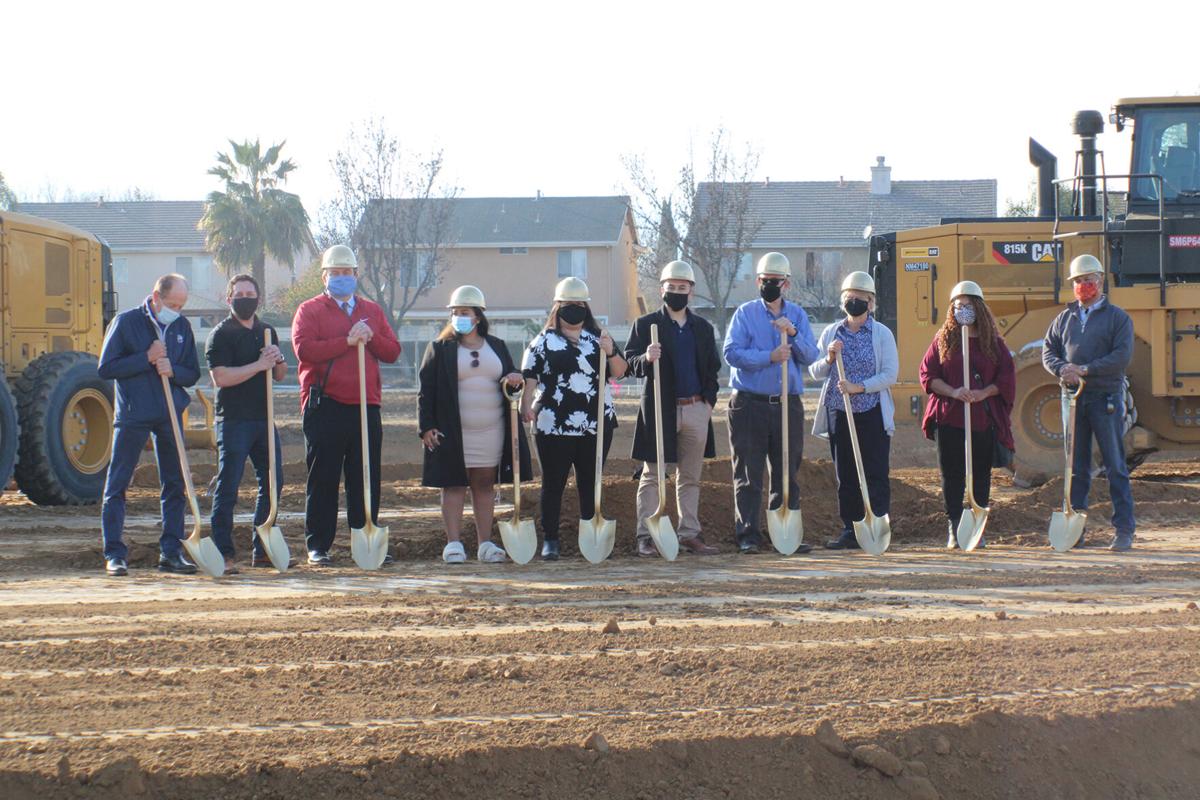 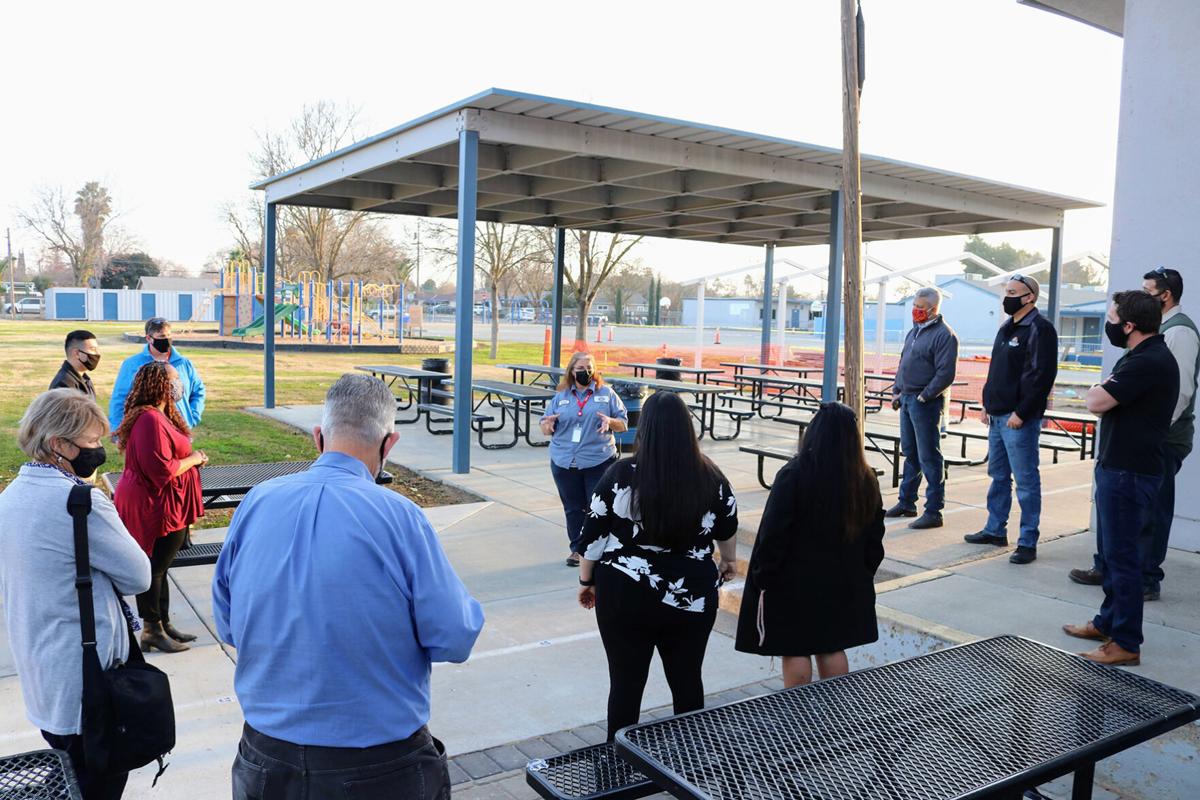 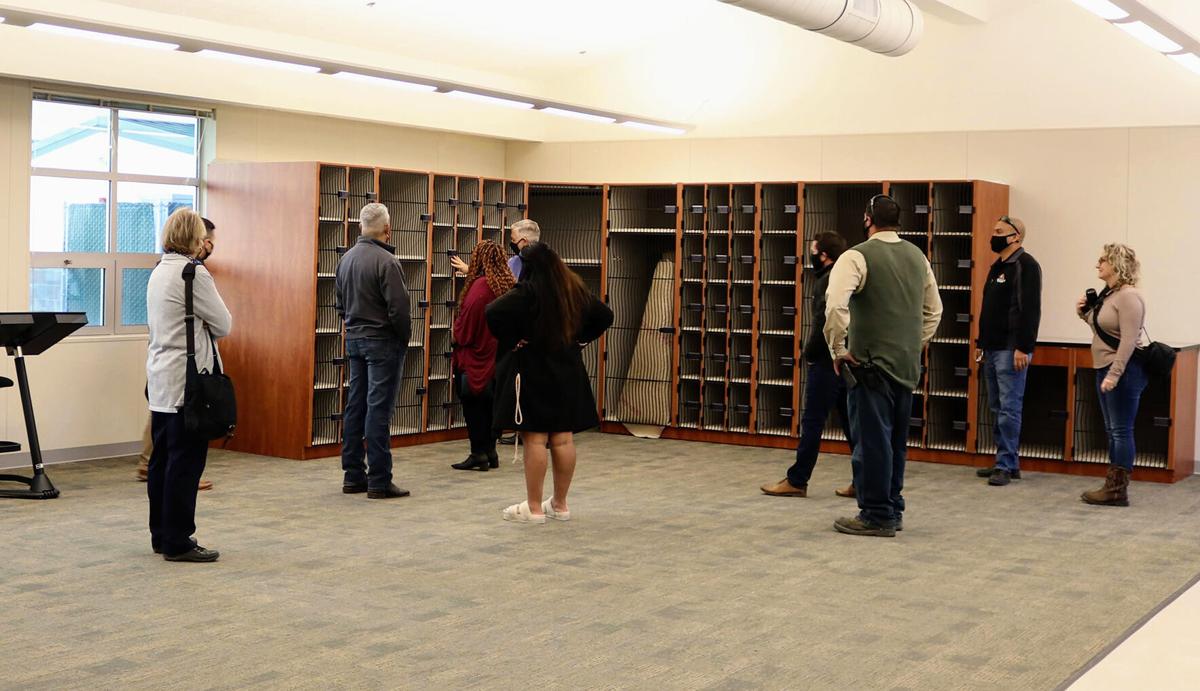 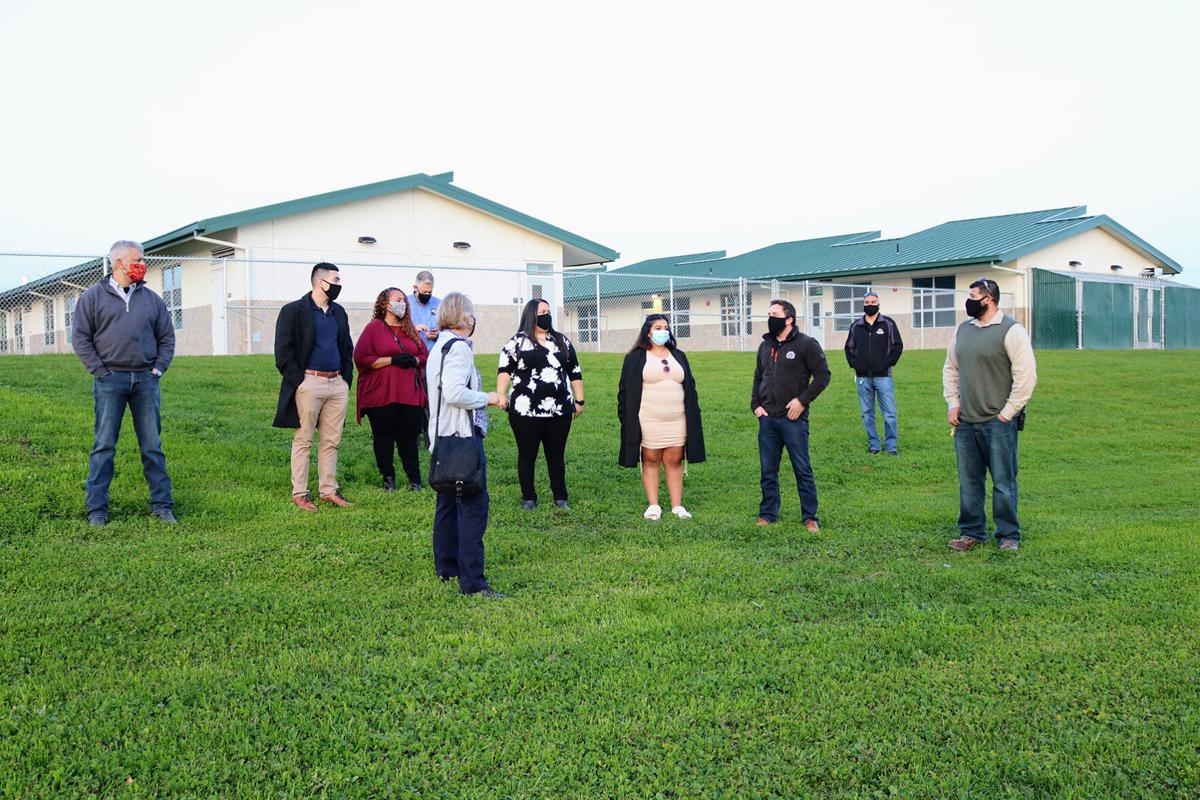 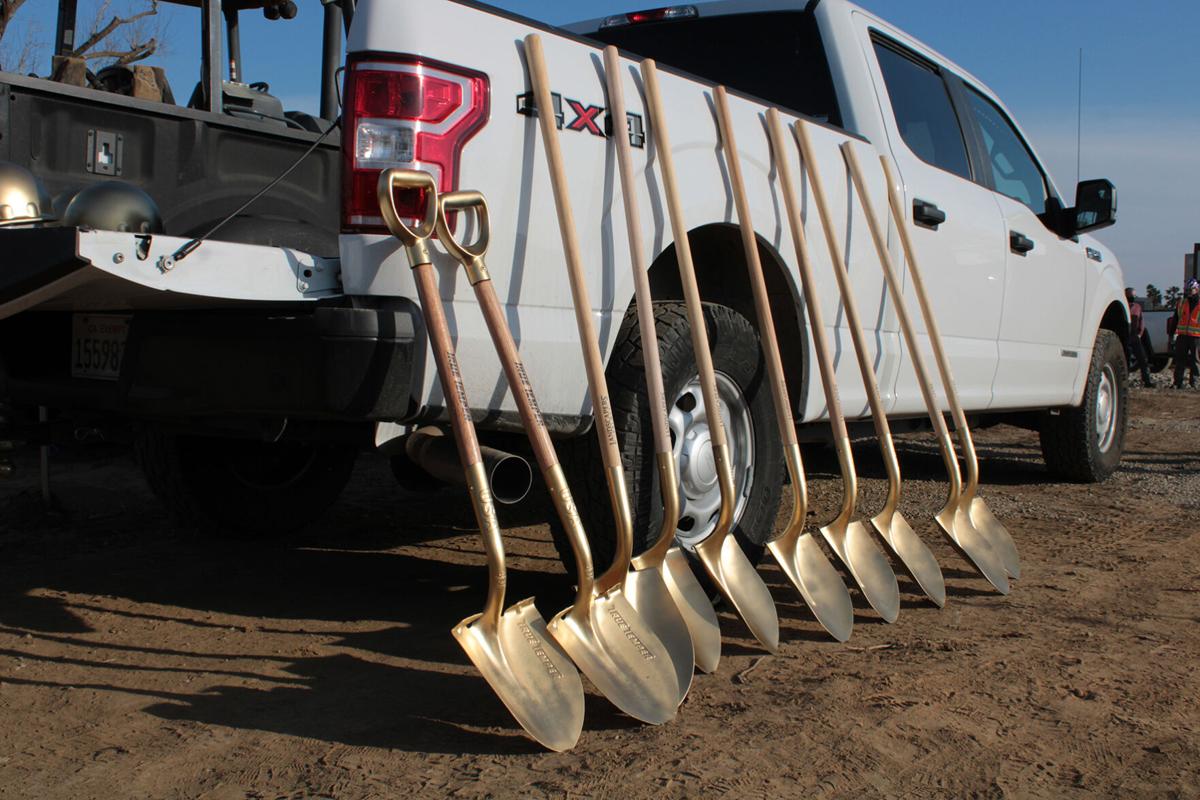 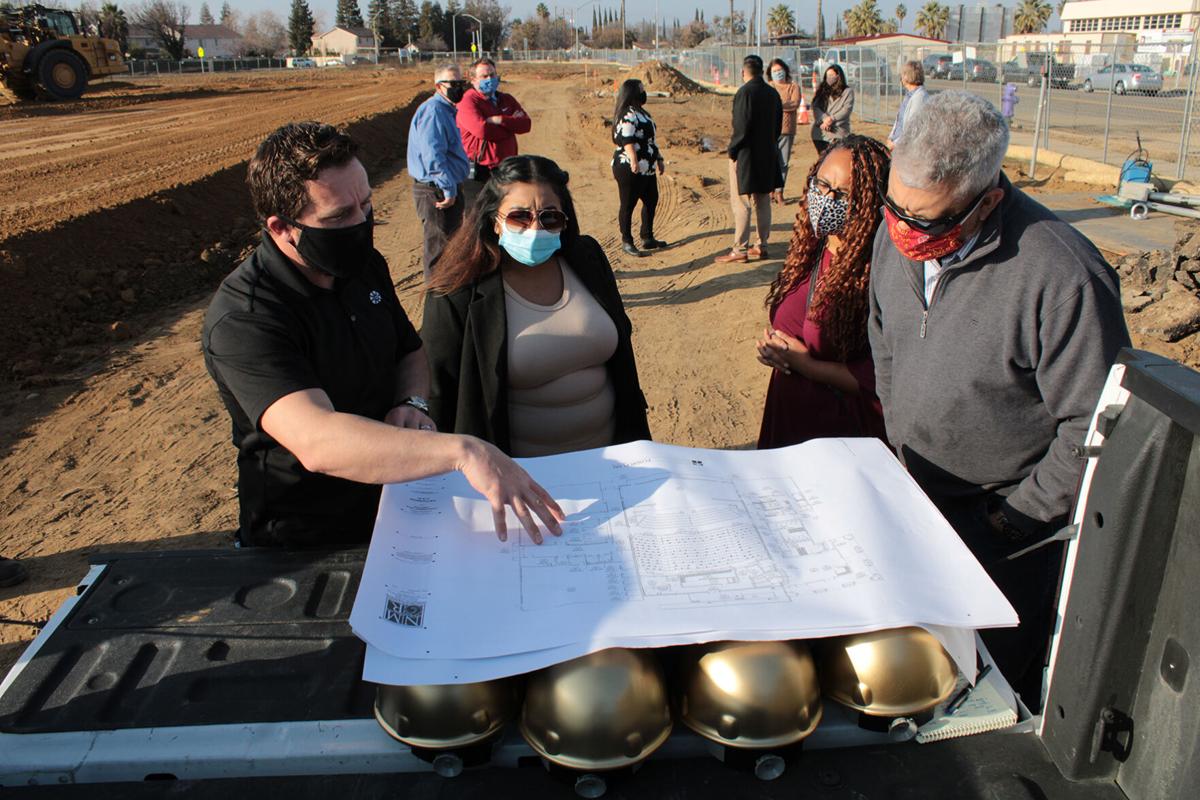 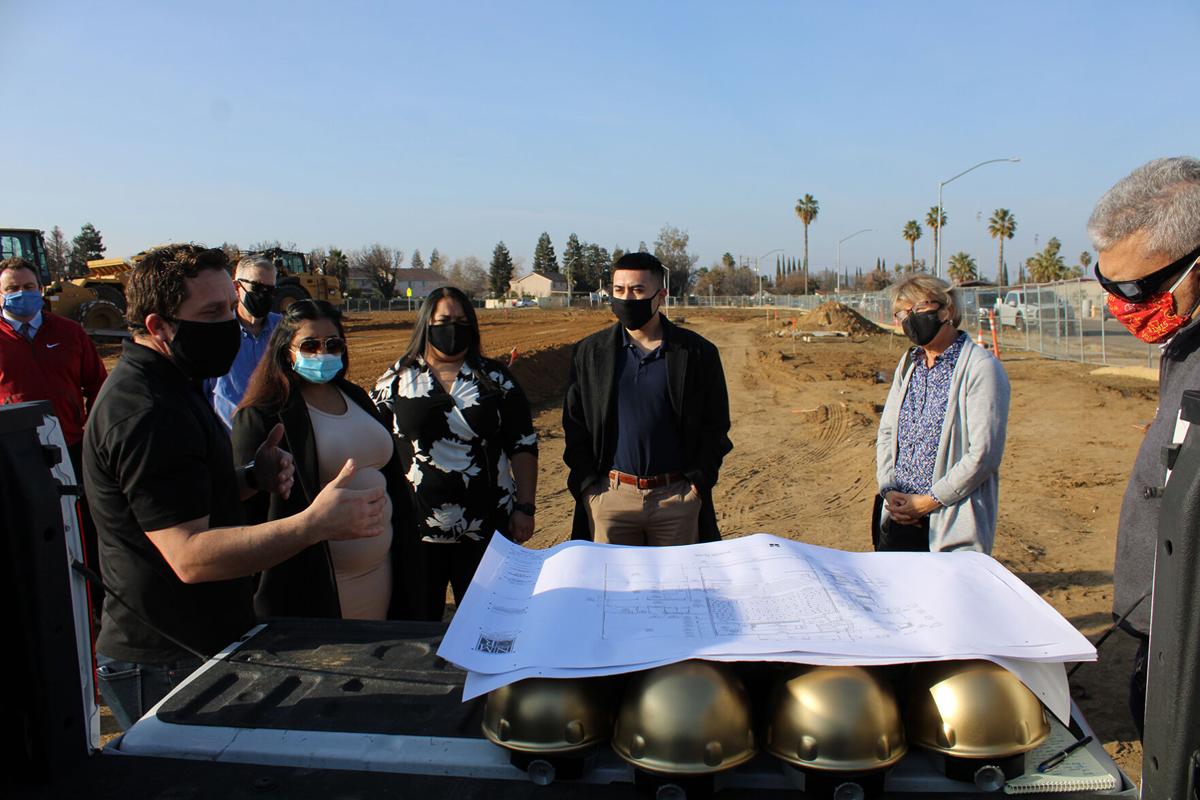 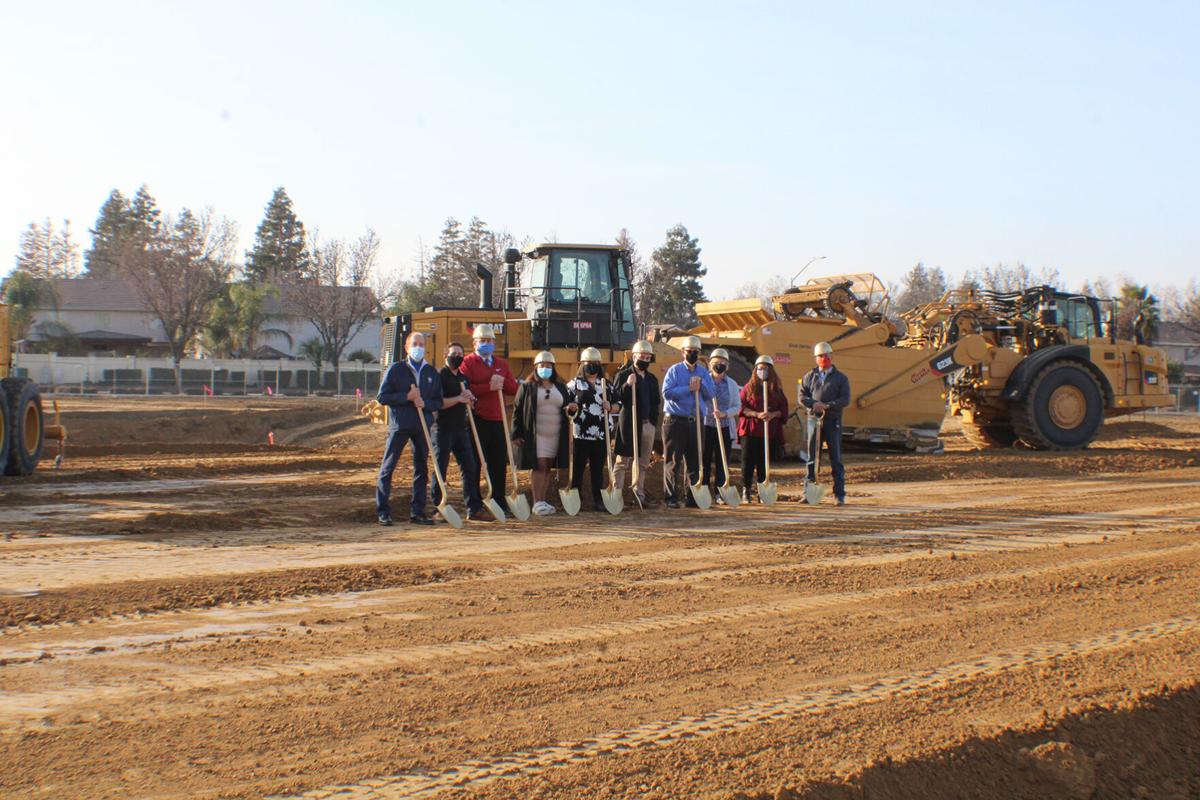 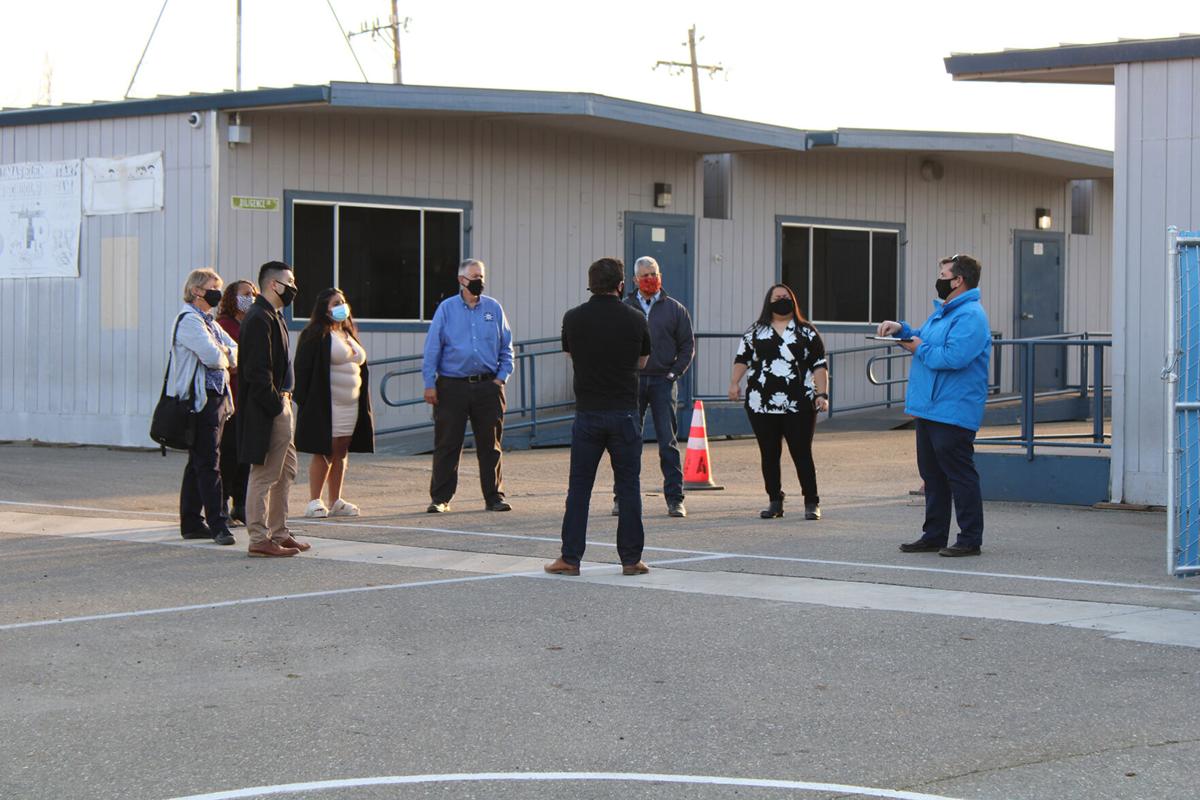 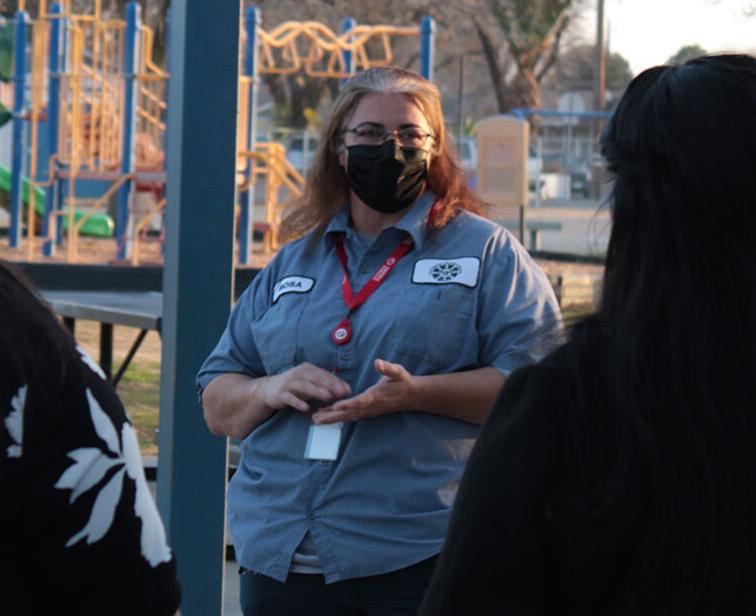 Patterson Joint Unified School District Board of Trustees participated in a ground breaking ceremony at the site of the theater project at Patterson High School.

Wearing gold helmets and using gold shovels, those gathered scooped a shovelful of dirt to commemorate their partnership in bringing this much needed and celebrated facility to Patterson students and the community at large.

District representatives also walked through the new construction areas at PHS that include the two-story science building, new tennis courts, shade structure, and improved concession area near the football stadium.

Members were truly impressed by the aesthetic that is developing but even more pleased that potential issues like lighting maintenance and storm drainage have been thought through and included in the new construction. Menge explained that the low-lying areas near the concession stand have had french drains put in to help prevent flooding.

French drains are a popular way of allowing water to quickly drain down into the ground naturally by layering rocks of varying size below the ground surface.

District representatives then did site-walks at Las Palmas Elementary and Walnut Grove.

Eric Drabert, the IT Director of Infrastructure explained the process of installing the LTE broadband towers at the different school sites as well as how they work to keep students and staff connected to improve everyone’s distance learning experience.

Rosa Oliveira, a member of PJUSD’s custodial team was on site to explain the sanitation procedures that the district has implemented to help combat the spread of COVID-19. She explained that while there have been some set-backs due to inefficient sprayers. those set-backs have been overcome by the use of different products that don’t take as long to apply and require no wipe down procedure, saving several hours per day.

French drains have also been installed at Las Palmas to prevent classroom flooding that would often occur during the rainy season. Custodial Supervisor Arturo Simental relayed an experience he had during a parent teacher conference when the water, “poured into the classroom, like a river.” The installation of the french drains will hopefully prevent future drainage issues and allow students and staff to continue their days uninterrupted as well as mitigating damages to the building.

At Walnut Grove district representatives toured the new music room that is inlcuded in the recently built wing on the easterly side of the school grounds. The improved ball fields will also promote student athletics in the City of Patterson, providing much needed space. Students who play recreational sports often have to jockey for field time. Baseball and soccer are very popular spring sports and sometimes it is difficult to schedule field use with The City.

Following the groundbreaking ceremony and school site tours, the first school board meeting of 2021 set about in the conference room of the Patterson Joint Unified School District’s Office on Keystone Boulevard.

The meeting was the first of the New Year and the first since Dec. 14. After the pledge of allegiance, the meeting started off with a trip to the lectern by California School Employee Association Patterson President, Christina Garcia. Garcia greeted everyone and stressed the importance of the CSEA in regards to defending members’ rights while simultaneously holding them accountable for the duties they perform. She worried that supervisors may be dissuading their employees from seeking the counsel of the CSEA.

“These are the times where we need to actually come together a lot more than we ever have, and the last thing that I want is for our members to be silenced, or for my voice to be silenced,” said Garcia, who followed up by extending a thank you to Administrator Veronica Miranda for inviting the CSEA to a discussion on the future hopes of the Associated Student Body program.

“We all want the children back, we all want to be productive and we all want to be making a difference in these children’s lives,” said Garcia. “I’ve been here thirty-one years and I take pride. I was born and raised in this town, I went through all the schools here so it’s my hopes and dreams that they all come back. So thank you so very much Veronica for including us in future hopes and plans.”

Next on the agenda was an update from Patterson High School Athletics Director, Rob Cozart.

“Thank you for having me here, I’m just going to provide an update for you with regards to athletics at the high school,” said Cozart. “It’s a way to bring you up to speed on everything that’s been going on. It seems like every time we come in here for these meetings it's ‘school reopening and school reopening’ and that type of thing and extracurriculars are also a part of that so I want to bring you guys up to speed with that.”

“Where we’re at right now is basically a ‘pause mode,’ we’re not having any organized team activities. We’re not doing any of those at the moment [because] we’re following along with the regional stay at home order and county restrictions,” said Cozart.

Cozart then went on to a timeline that showed how everything proceeded after the pandemic shut down in spring 2020 when spring sports were canceled in March. In October, organized team activities were able to resume under special circumstances that allowed for alternating between seasons 1 and 2 during different days of the week. But once the county fell back into the purple-tier, organized activities were shut down once again on Dec. 6, which led Cozart to discuss plans for the future.

“Right now as we're planning ahead and constantly planning as we go through this, one of the things is the NFHS learn website, which we get a good chunk of our coaching certifications from, they have a free course for COVID-19 and I’m adding that to our coaches requirement for this year that way when they go through the steps to clear themselves as a coach for the season, that’ll be an additional certification I’m going to require them to do.”

Some of the other steps included forming a preliminary plan that will be written and ready to submit to the county, remaining flexible, working together, and updating live stream capabilities by installing two Pixellot cameras at the stadium and gymnasium.

Superintendent, Phil Alfano, was the last to speak before the meeting adjourned Tuesday evening.

“There is still a lot of uncertainty about what is going to happen next. I think it will get sorted out here pretty shortly, I don’t think that the deadline of February first is realistic given the fact that most of the counties and regions in our state are still under the stay at home order so I hope to get more information shortly. We’ll update the board and our staff on what I've learned so far and we’ll go from there,” said Alfano. “...the case threshold [the governor] cited right off the bat...we’re about double that and our last conversation with county public health, they were saying that they thought we would probably plateau and start coming down around mid-February. That’s still about a month away. So again I don't think we are going to be held to that February first deadline.”