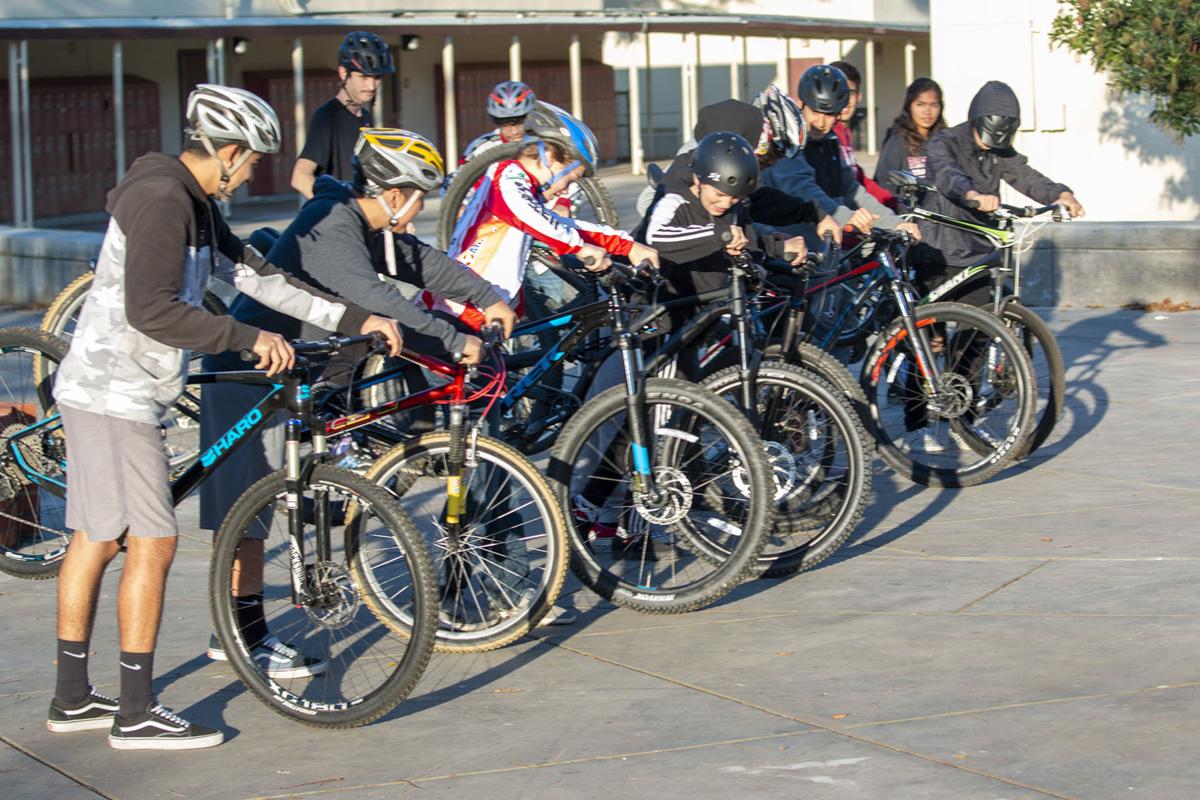 The Patterson High mountain biking team line up for instruction before participating in various drills. 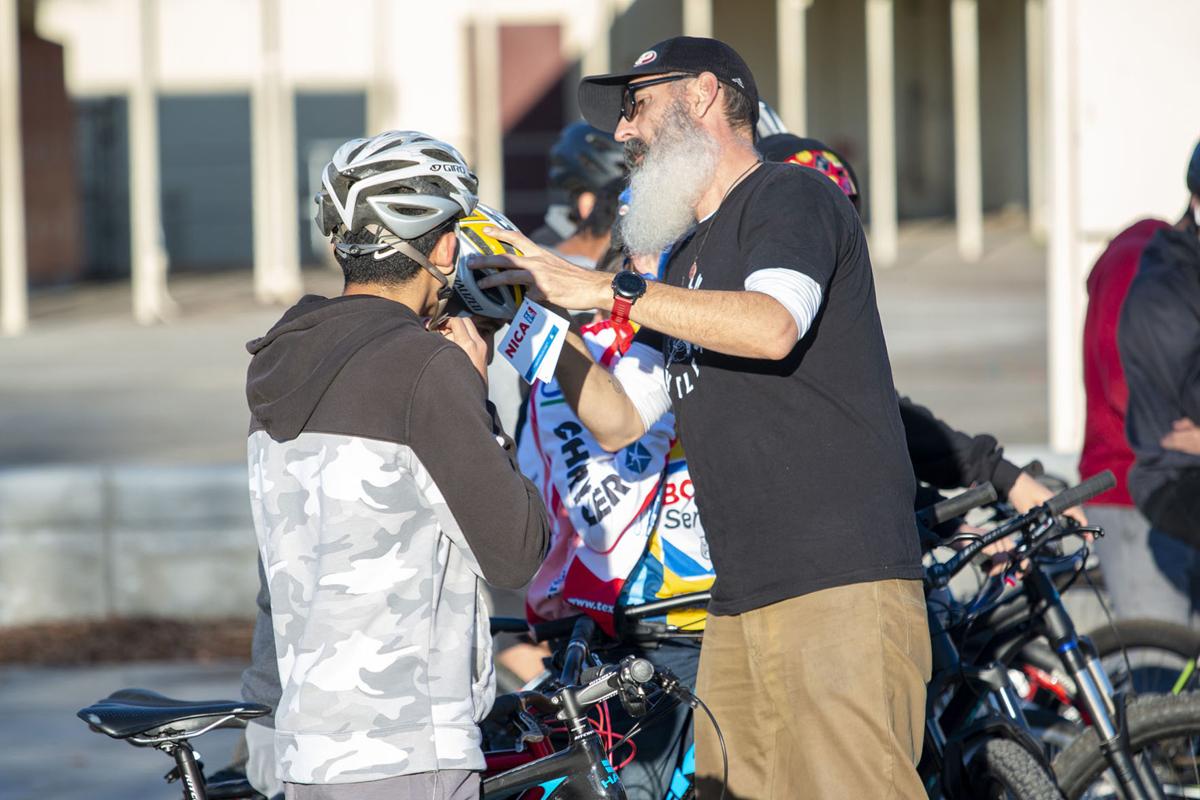 Head coach George Crawford helps a member of the team with their helmet. 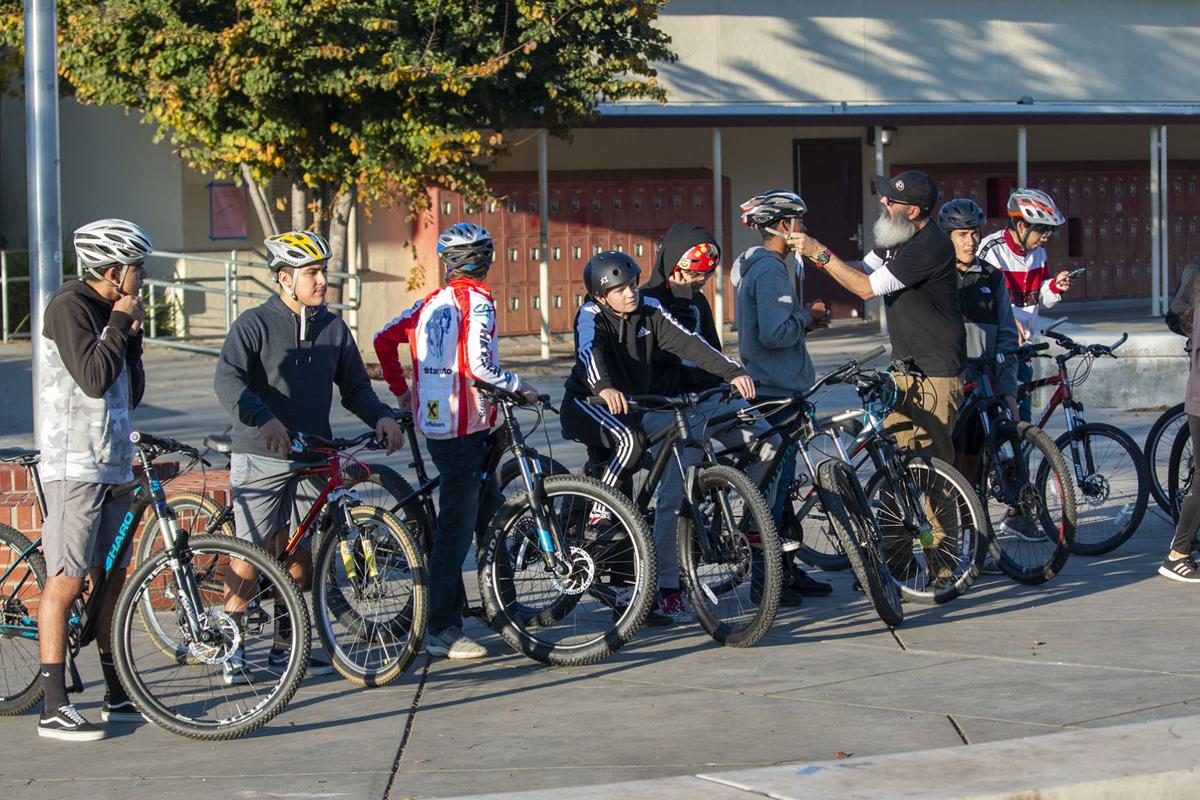 Members of the Patterson High mountain bike team are lined up for helmet inspection. 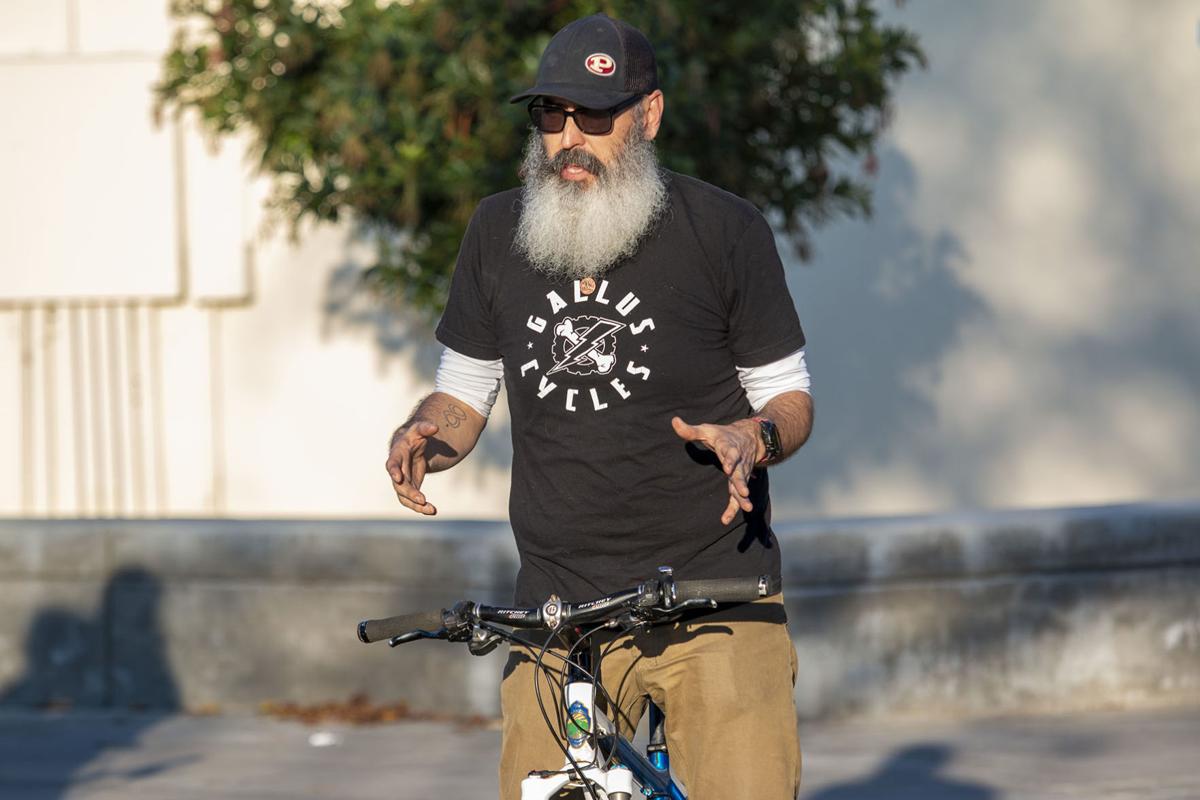 Head coach George Crawford explains some instructions to his athletes. 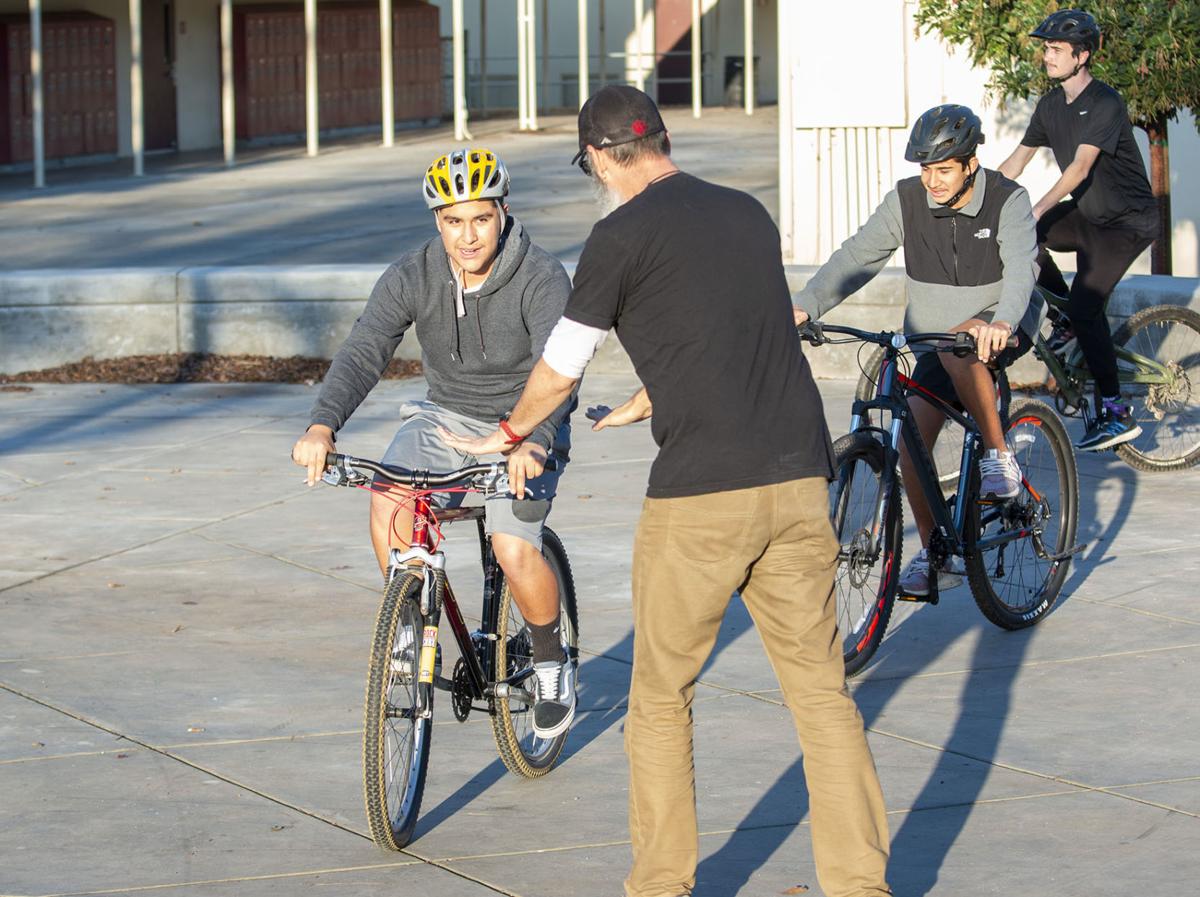 Members of the team took turns practicing how to stop with their front brakes. 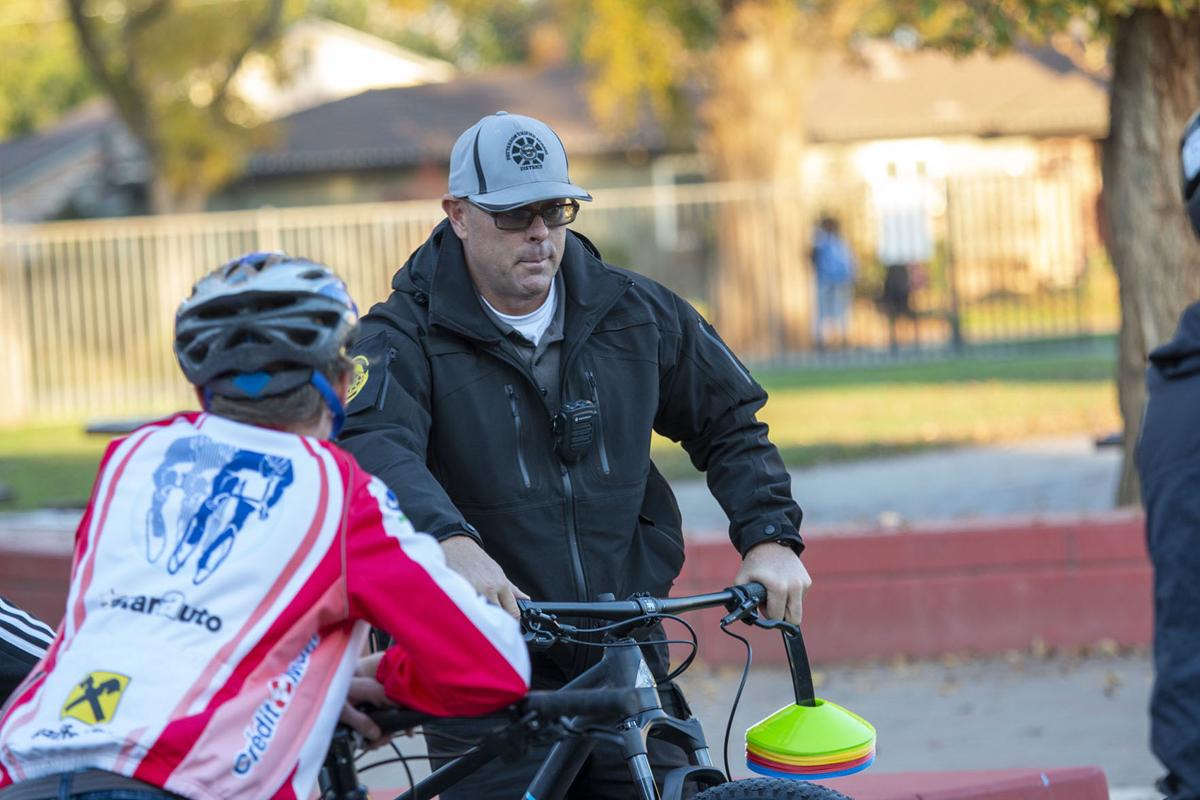 Assistant coach Vince Lopez goes over some instructions on how to properly shift gears. 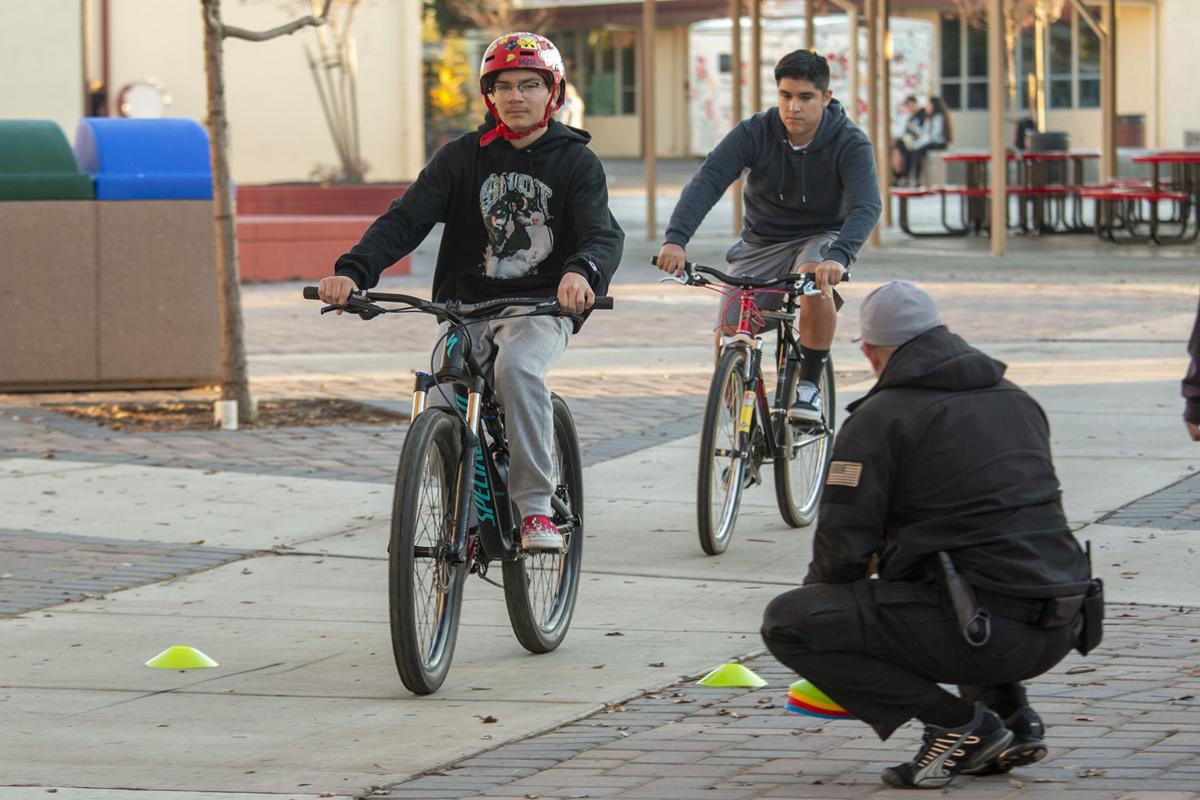 Members of the team were asked to demonstrate their knowledge on how to shift gears during a drill.

The Patterson High mountain biking team line up for instruction before participating in various drills.

Head coach George Crawford helps a member of the team with their helmet.

Members of the Patterson High mountain bike team are lined up for helmet inspection.

Head coach George Crawford explains some instructions to his athletes.

Members of the team took turns practicing how to stop with their front brakes.

Assistant coach Vince Lopez goes over some instructions on how to properly shift gears.

Members of the team were asked to demonstrate their knowledge on how to shift gears during a drill.

A new athletic team has formed at Patterson High and they are in the early phase of bringing the sport of mountain biking into the fold.

Mountain biking is not for the faint of heart. Riders are tasked with riding downhill on off-road trails that can vary in difficulty and danger. The object is to traverse these tracks as fast as possible, but doing so is easier said than done.

Patterson High will begin by joining the National Interscholastic Cycling Association (NICA). NICA was founded in 2009 and has grown to include leagues across 31 states. The leagues are categorized as affiliate, chapter, project and emergent leagues. California is divided into two leagues: NorCal High School Cycling League and SoCal High School Cycling League. The two California leagues were part of the original three leagues that helped form NICA in 2009 along with Colorado.

The NorCal High School Cycling League is further divided into a North and South group and two divisions due to the volume of participants. Patterson will join the South group in Division II.

Patterson High teacher and former golf coach George Crawford shared he was aware of the league’s existence for several years, but was impressed with the league’s size and activity upon inquiring.

Crawford has been riding for approximately 25 years himself, and admitted that the idea of starting a cycling team had been an idea that has lingered.

“I’ve thought about starting a team at PHS for a few years. The league has been going on for almost 20 years but wasn’t sure it was possible since cycling is a more expensive sport. I was contacted by friends in Modesto who were looking into starting a team and decided this was the year to try. I am no longer coaching golf, so I have time and I wanted to see what the interest level was around campus so I started putting the word out and I quickly had kids respond with interest,” Crawford said via email.

Interest only continues to grow. The team has 12 athletes officially registered for the upcoming season already, and Crawford shared that more students continue to trickle into the program, with it growing to 15 students including two students that are in eighth grade. The pair of eighth graders will not be able to compete in official competition, but will train and participate with the team in preparation for their freshman year.

Some of the riders on the team have experience riding, but for most of the prospective mountain bikers the sport is completely new to them.

Monday’s practice for example began with Crawford illustrating the proper way to secure a helmet before having the riders do drills on how to properly shift their weight and use their front brake without flipping over the bike.

Riders were then put through drills on how to properly shift gears. The coaching staff has the team learning all the various basic techniques to the sport before also helping build up their stamina in the upcoming weeks.

Crawford shared that he hopes to ease his riders into it with a 10-mile ride before increasing the distance to 20 miles plus once the time is right. The team will be practicing going uphill and downhill. The team will utilize the surrounding area as well as visiting trails in the Modesto and Sonora area to help them train for the season that begins in March.

The Patterson High Mountain Bike Team is currently listed as a club at Patterson High, but is officially recognized as a team by the NorCal High School Cycling League and is set to participate in competition in the spring.

Crawford is joined by three assistant coaches (Vince Lopez, Irma Crawford and Hector Lastra), as well as an additional assistant coach currently undergoing the process of getting credentials (Freddy Galvan).

Cycling isn’t cheap. The cost of entry is a barrier that any prospective team must overcome.

“The cost is my biggest worry. An entry level mountain bike that can stand up to training and racing start off at $400. The more common department store bikes that most kids have around here can work but they tend to require a lot more maintenance and repairs,” Crawford. “The goal is to have a safe bike that is mechanically sound.  Like any sport, cycling has its own specialized clothing, bike shorts, jerseys, gloves, arm warmers, leg warmers etc.  You can ride around town in anything you want but if you're going to train and race you want proper gear.  And then one expense I didn't expect was the cost of registering for the race themselves.  Each race the student wants to participate in will be $50.”

The team has already received donations from The Patterson Lions Club, Patterson Rotary and Patterson Soroptimists, but is still looking for funds to help purchase additional equipment and tools for maintenance. The PHS Mountain Bike Club is hoping to fundraise a sum of $2500 to help get the program on its feet.

“If we reach our goal we have a really good chance of having our fund matched by the Outride Foundation,” Crawford said. “Any club or business that would like to sponsor the team will be displayed on our team jerseys, banner, gear and website. If any local business would be interested in sponsoring us, they can contact me or go to the team website for more info.”

Patteron’s first race is slotted for March 8 in Redding. The team will go up to Redding for the weekend to participate in some camping on Saturday before the race is held on Sunday. This is a common experience for mountain biking teams that must travel to areas far and wide in order to ride on the courses created from the trails of off-road areas.

The Tigers will then follow up with races on March 22, April 15 and April 25 as part of competing in the NorCal Cycling League.