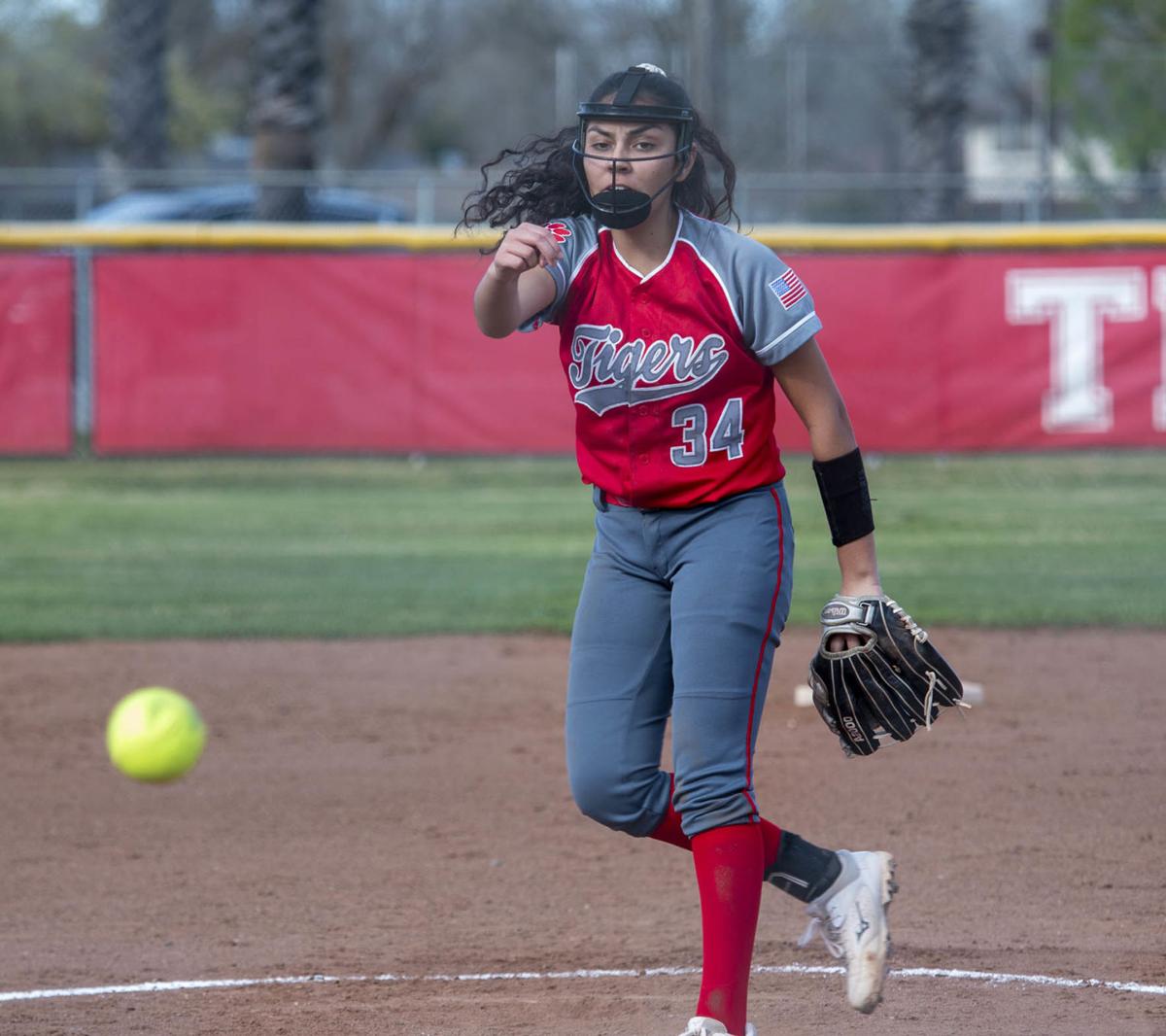 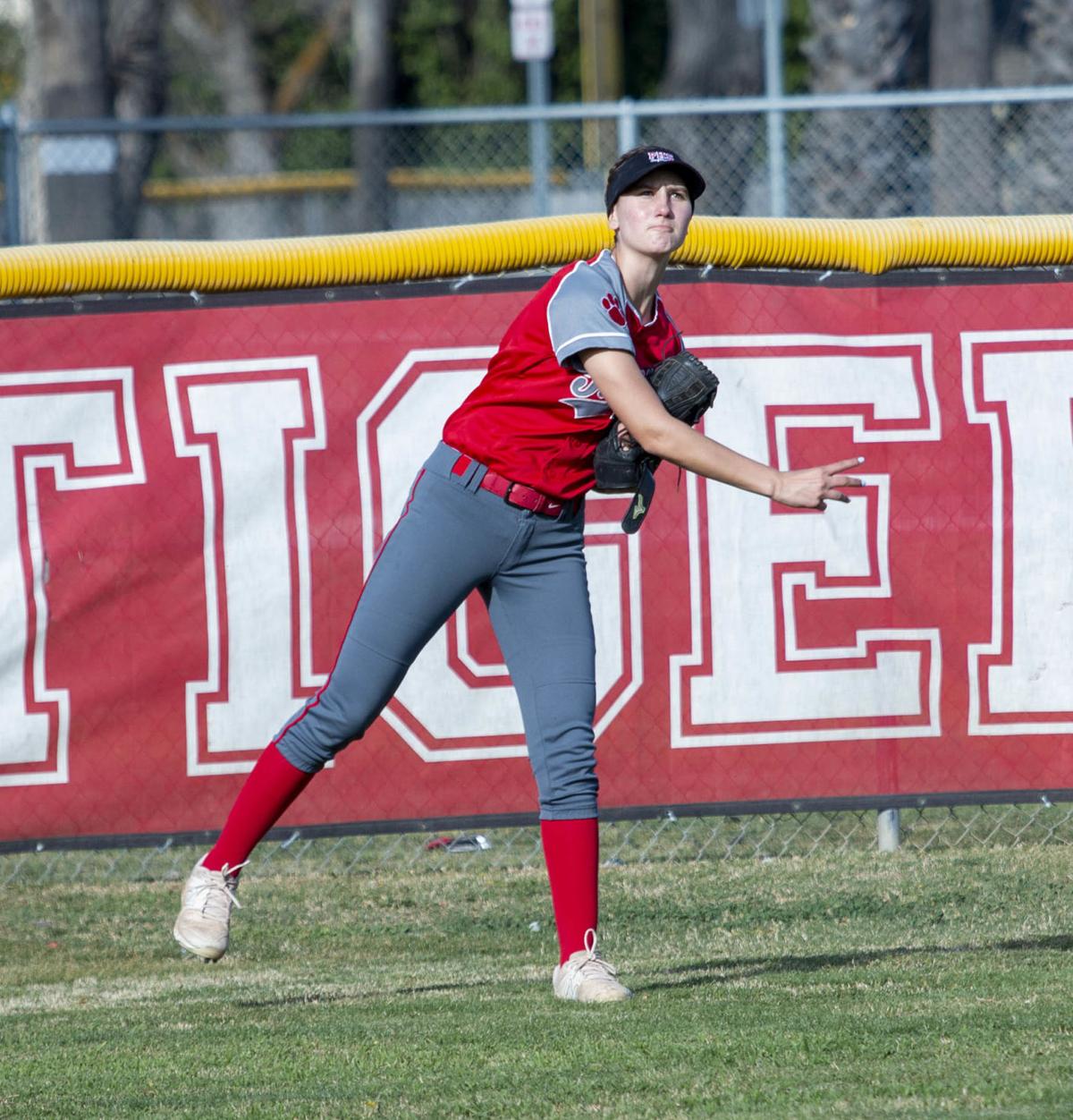 ophomore Ellena Ortiz throws the ball back to the infield after fielding a fly ball on March 10. 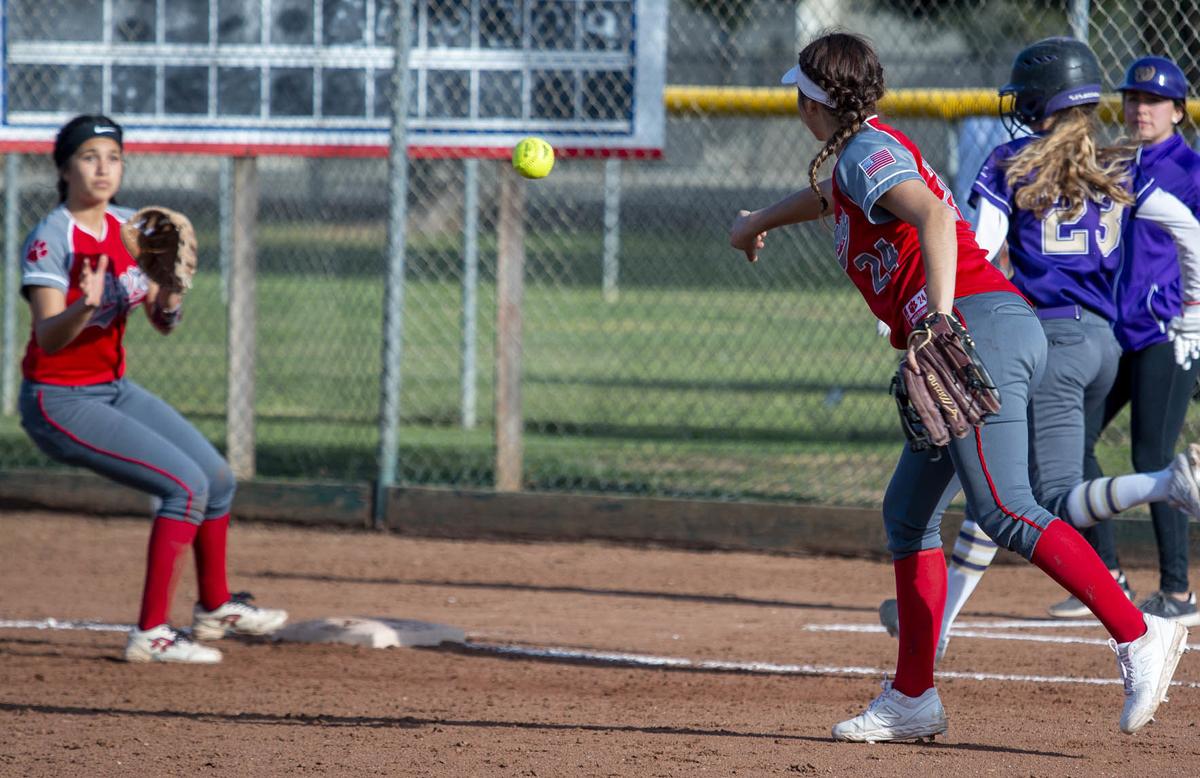 Senior Brooke Lynn Gill flips the ball to first base to attempt to get the Livingston runner out on March 10. 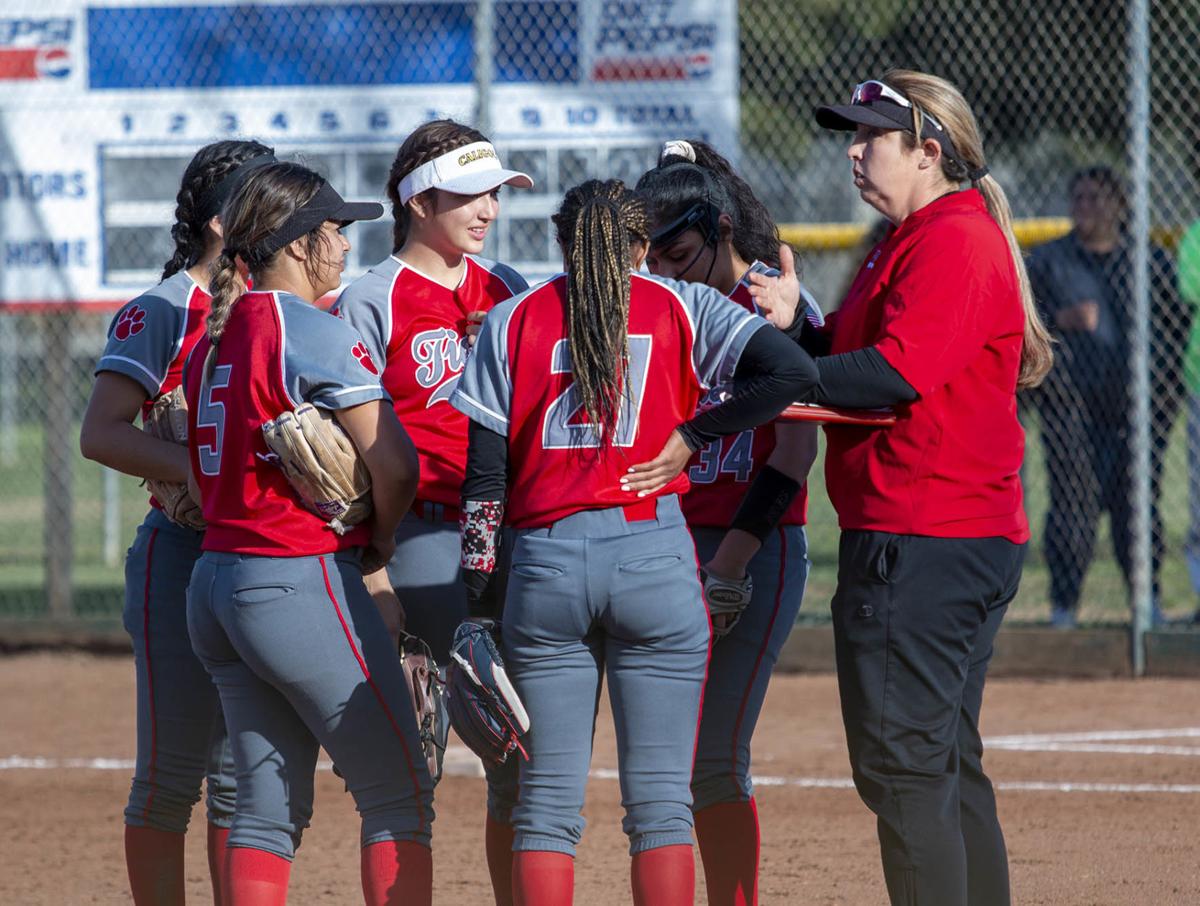 The Patterson High varsity softball team has a meeting on the mound on March 10. 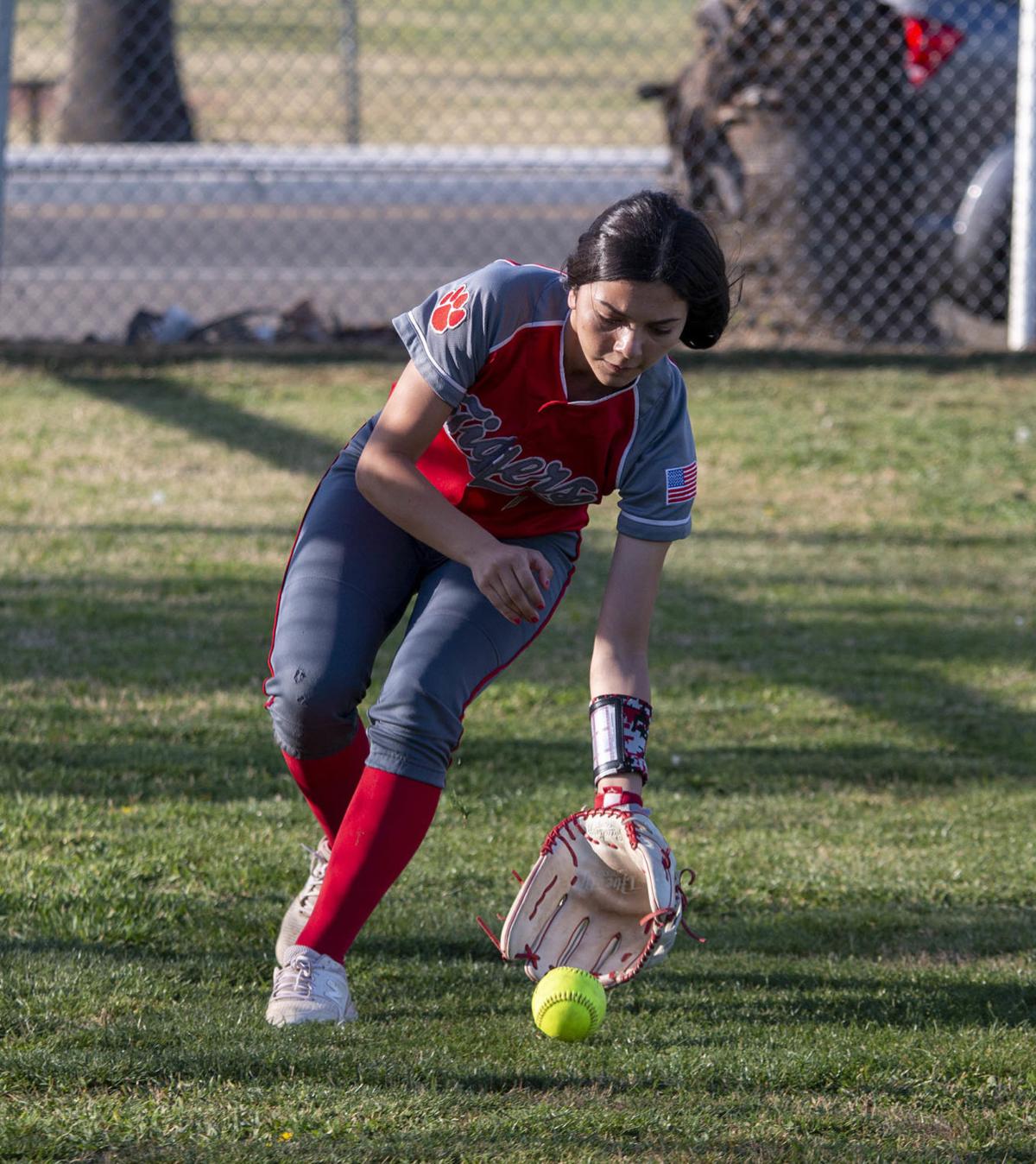 Sophomore Katelyn Zarate reaches down to retrieve the ball following a Livingston hit on March 10.

ophomore Ellena Ortiz throws the ball back to the infield after fielding a fly ball on March 10.

Senior Brooke Lynn Gill flips the ball to first base to attempt to get the Livingston runner out on March 10.

The Patterson High varsity softball team has a meeting on the mound on March 10.

Sophomore Katelyn Zarate reaches down to retrieve the ball following a Livingston hit on March 10.

A win over Livingston on Tuesday was just one of the five games the Tigers played over the last week. Patterson kept busy over the weekend, attending the Jaguar Classic Tournament held at Rainbow Fields in Tracy. Patterson began the tournament with an 0-2 start but got back off the mat to win the final pair of games over Waterford and Bret Harte to salvage the tournament.

They will then host Orestimba on March 13 and Atwater on March 18. Both games are scheduled for 4 p.m.

Tuesday’s game versus Livingston was a wild one. Over 20 runs were scored between the two squads.

Livingston did their best to try and keep pace with Patterson, but the Tigers had a response each time the Wolves attempted to tighten the score.

Patterson began the game with a 4-0 lead after the first inning. Livingston trimmed the score down to 5-4 after the top of the third, but Patterson erased those gains with three runs of their own in the bottom of the frame to hold an 8-4 lead.

Livingston made strides in the top of the fifth with three runs, but Patterson responded again with four runs in the bottom of the fifth to expand the lead to 12-7. One run from each squad down the stretch brought the final score to 13-8.

Junior Kealohilani Tufono was 3-4 with three runs, an RBI, a stolen base and two doubles.

Senior Carli Medina was 2-3 with two runs and an RBI.

The bats had little trouble scoring against Waterford High in the last game Patterson would play at the Jaguar Classic Tournament.

Patterson went ahead early, with five runs to open the game. An additional five runs in the third inning gave the Tigers a huge 10-run lead over the Wildcats.

The offense was backed by a superb performance from senior Delilah Garcia. Garcia shutout Waterford during her four innings of work allowing five hits, one walk and striking out four batters.

Senior Xiana Isom’s bat stayed hot at the tournament with her second straight game with a home run. Overall Isom was 2-3 with four RBIs.

Senior Carli Medina was 3-3 with two runs, a double and an RBI.

Sophomore Elena Ortiz was also 2-3 with a run and an RBI.

In total, the Patterson offense exploded for 14 hits during only four innings of play. The game was called early due to mercy rule.

Waterford sophomore Katie Camara was a bright spot for the Wildcats, going 2-2 with a double at the plate.

Senior Tawni McCarty had a tough outing on the mound, giving up 10 runs and 13 hits while walking two batters. McCarty struck out four hitters.

Bret Harte mustered up two runs in the top of the third to cut the lead down to 6-3, but the Tigers responded with a pair of runs in the bottom of the fourth to push the margin to 8-3. The game was ended after the top of the fifth inning due to time limit restrictions.

Patterson senior Xiana Isom ignited the offense going 2-3 with a home run and four RBIs. Junior Kealohilani Tufono was 2-2 at the dish with a double, a stolen base and two RBIs.

Garcia threw five innings for the Tigers yielding five hits and four walks while striking out eight. Although three runs were scored by Bret Harte, none of those were registered as earned runs against Garcia.

Bret Harte senior Karlee Juarez was 2-3 with a pair of runs and stolen bases.

Junior Morgan Mcdearmid got the start giving up six hits, seven earned runs and two walks while striking out one.

The first two innings did not go Patterson’s way. The Tigers found themselves trailing Liberty Ranch 5-2 through the first two frames. Liberty critically scored two runs in the top of the fourth inning to take a healthy 7-2 lead into the bottom of the frame.

The Tigers’ bats came alive to the tune of four runs in the bottom of the fourth inning, but despite a great effort the comeback was not to be, dropping the game 7-6 to Liberty Ranch in a game that was cut short due to time limit restrictions in place for the Jaguar Classic Tournament.

Patterson senior Xiana Isom was a force for the Tigers going 2-3 with two doubles, a run and four RBIs.

Sophomore Emma Medina was a perfect 2-2 with two runs and a walk.

Pitching in her second game of the day, senior Delihla Garcia notched four innings against the Hawks yielding three earned runs while striking out two.

Liberty Ranch was led offensively by junior Karli DalBianco. She finished the day going 2-2 with two doubles and three RBIs.

Junior Presli Kooyman pitched in with an RBI single in the first inning. Overall Kooyman finished 1-3 with two RBIs.

The first inning between Patterson and Beyer resulted in a 1-1 tie, but the Tigers scored in the bottom of the second to take a narrow 2-1 lead over the Patriots.

Beyer briefly tied the game back up at 2-2 following the top of the third, but Patterson responded with a pair of runs in the bottom of the same frame to take a 4-2 lead.

The Tigers went into the top of the fourth hoping to hold the line, but the Beyer offense exploded for four runs in the top of the fourth, to take a 6-4 lead when freshman Alison Robinson cleared the bases with a three-RBI double to jump ahead. Robinson had a strong day at the plate for Beyer, going 3-3 overall.

Patterson did not respond in the bottom of the inning, and the game ended due to the time limit.

Patterson sophomore Ellen Ortiz had a great offensive performance, going 2-2 with a pair of RBIs and a double.

Beyer senior Naveah Freitas finished 2-2 at the plate with two RBIs, a walk and a double. Junior Page Fisher was the starting pitcher for the Patriots. She finished her body of work with four innings pitched, four hits, four walks, three earned runs and a strikeout.