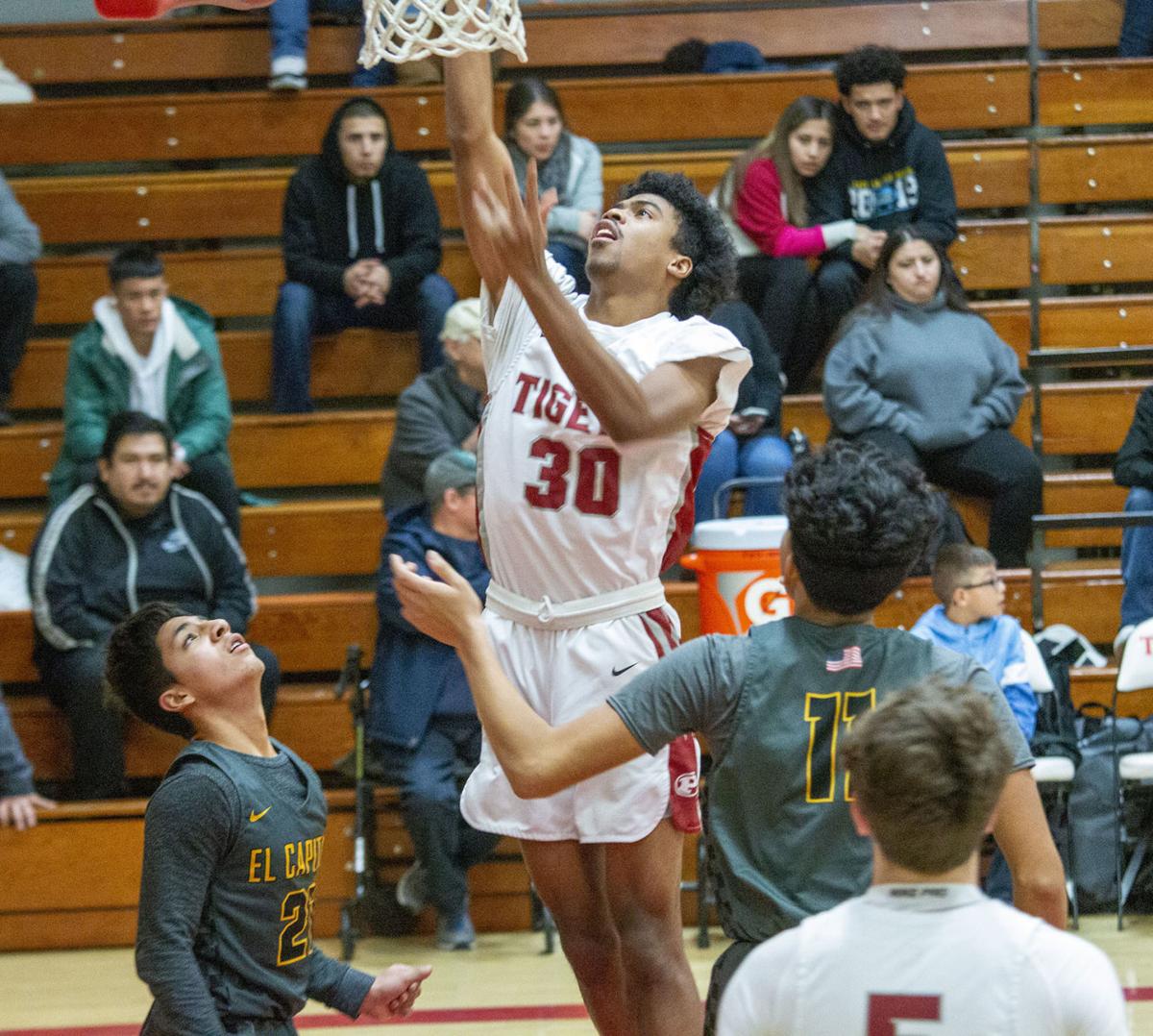 Senior Carmichael Jones goes up for a layup on Jan. 17 at Dave Klein Gymnasium. 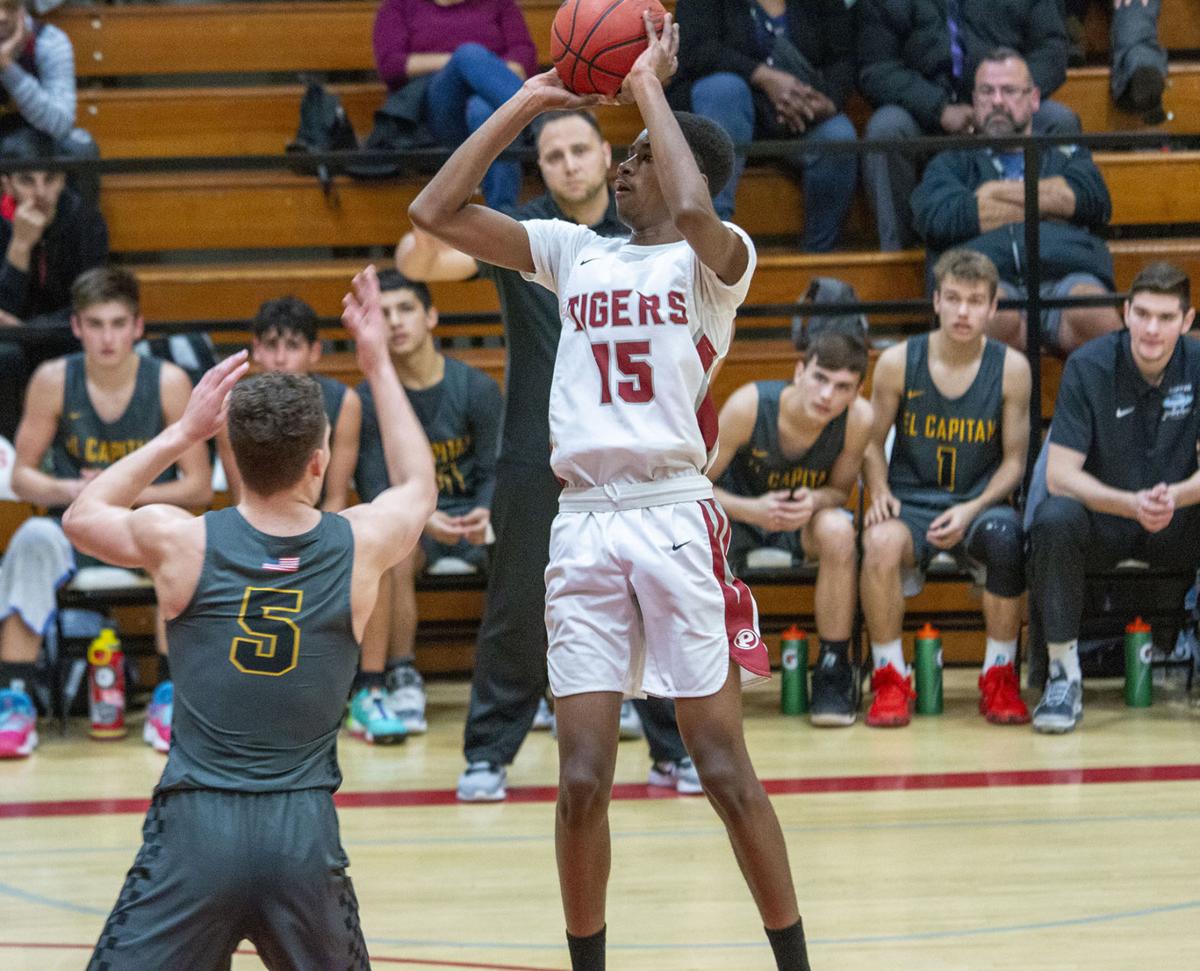 Junior Yannick Andzuouana rises up for a jumper on Jan. 17 at Dave Klein Gymnasium. 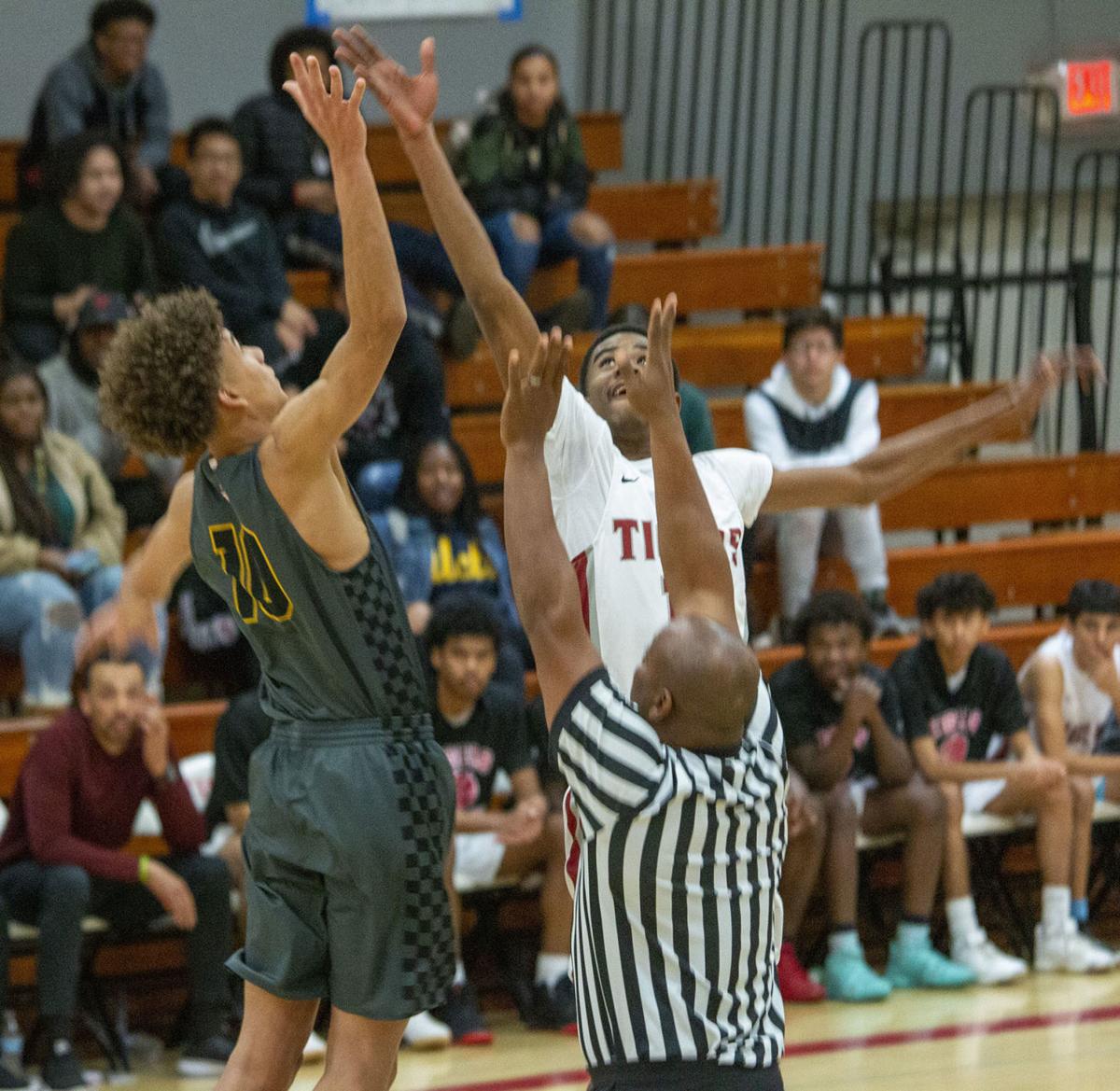 The tip-off between Patterson versus El Capitan on Jan. 17 at Dave Klein Gymnasium. 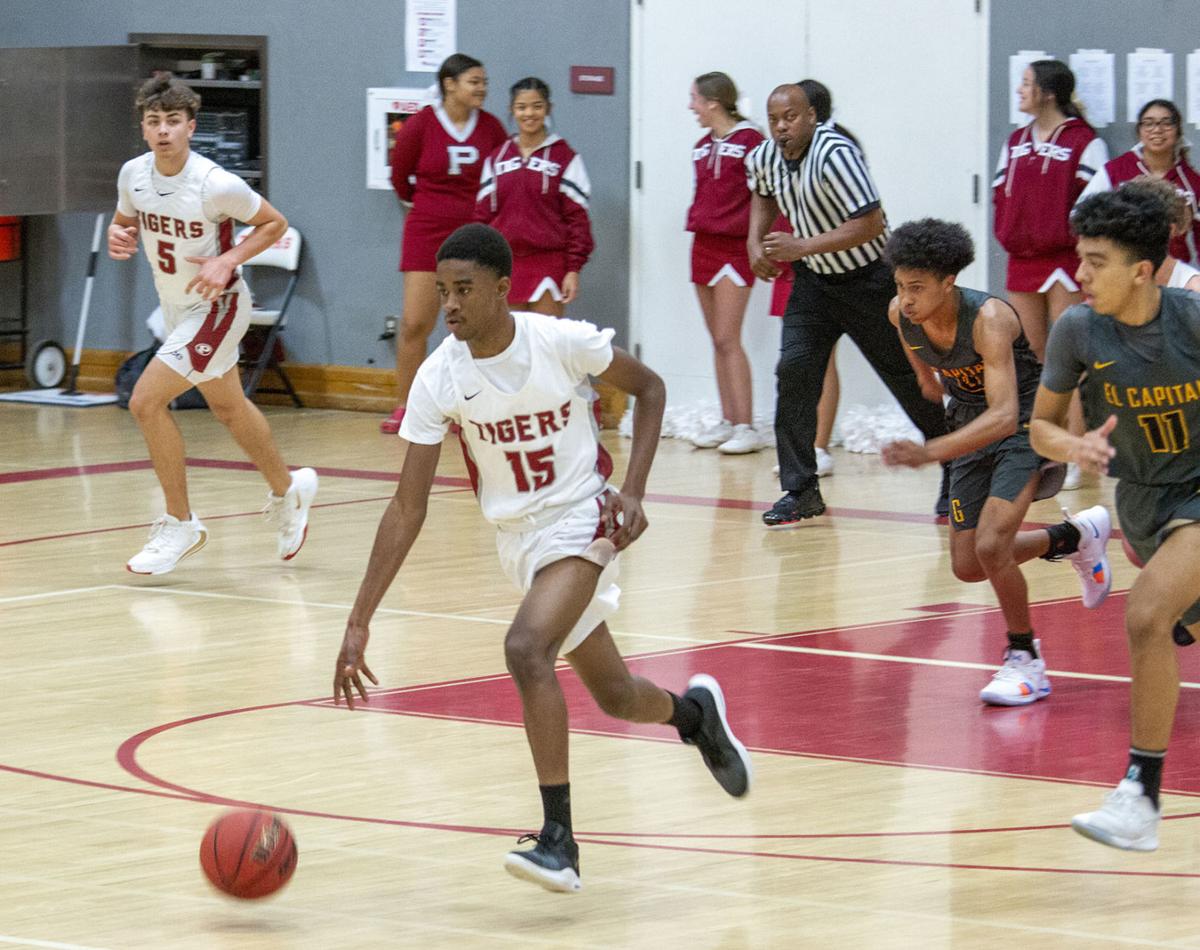 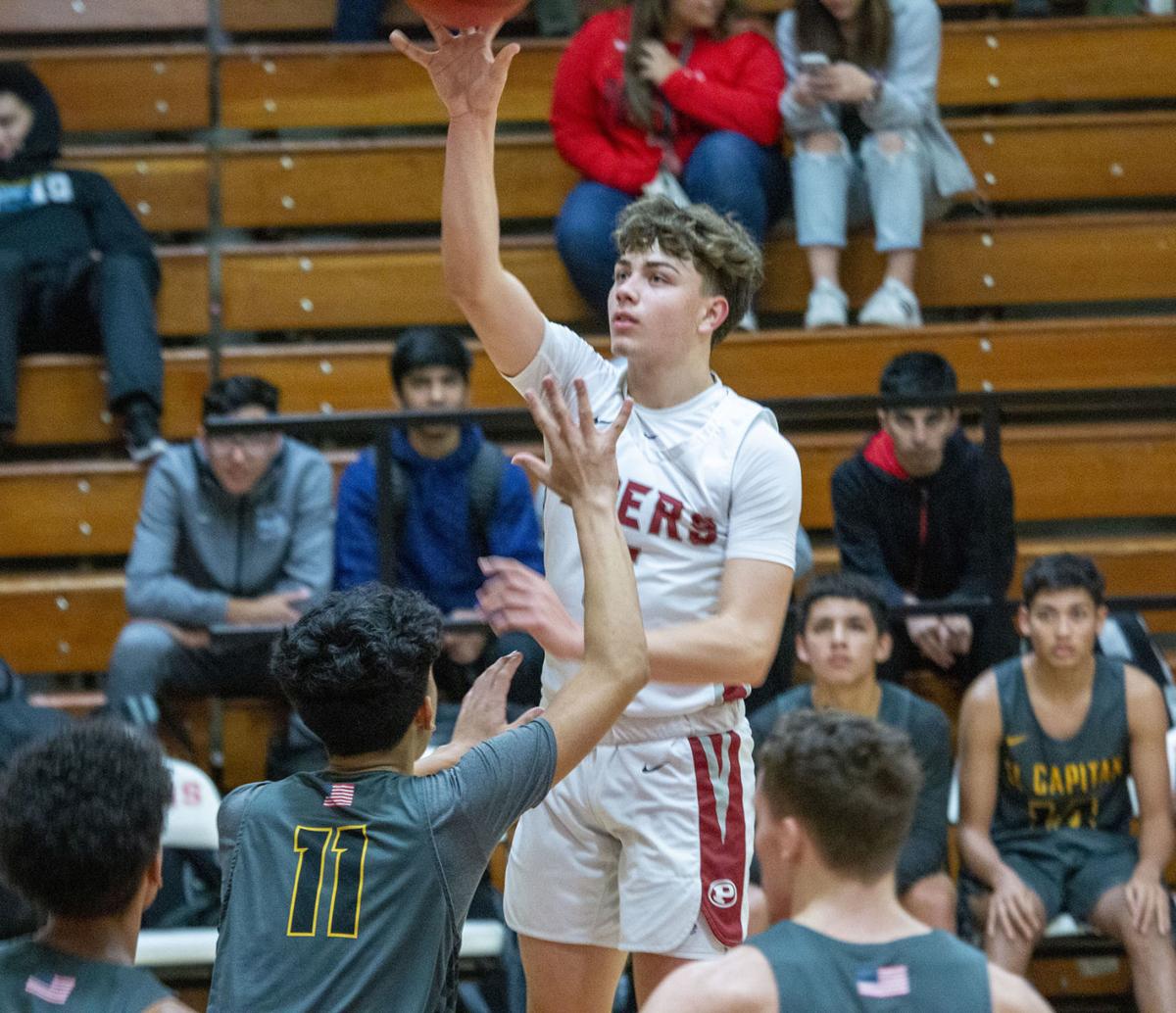 Junior Logan McCleery offers up a shot on Jan. 17 at Dave Klein Gymnasium.

Senior Carmichael Jones goes up for a layup on Jan. 17 at Dave Klein Gymnasium.

Junior Yannick Andzuouana rises up for a jumper on Jan. 17 at Dave Klein Gymnasium.

The tip-off between Patterson versus El Capitan on Jan. 17 at Dave Klein Gymnasium.

Junior Logan McCleery offers up a shot on Jan. 17 at Dave Klein Gymnasium.

The varsity boys basketball team got their week started by snapping a six-game losing streak in an overtime battle against Central Valley on Jan. 15. Unfortunately, the Tigers were unable to make it two wins in a row, with a loss to El Capitan at Dave Klein Gymnasium on Jan. 17.

Overall, Patterson heads into their matches this week with a 5-14 record. The Tigers are 1-3 in Central California Conference play.

Patterson hosted Merced High on Jan. 22 after press time. The Tigers have a bye on Jan. 24, but will return to action against Buhach Colony on Jan. 27. The game is scheduled for 7:15 p.m.

Nine turnovers in the first quarter resulted in Patterson finishing the frame with a 10-point deficit against El Capitan last Friday. Patterson got up to speed in the second quarter, but still lost the frame 15-12 to trail the Gauchos 35-22 at halftime. Despite the deficit Patterson stayed in the game against El Capitan, but the Tigers’ chances to cut it to less than 10 points would slip away from them in the form of a missed shot or turnover that often resulted in El Capitan scoring on the other end.

“For us it's just all about taking care of the basketball. Recognizing who to stop on defense and not giving up any easy shots,” head coach Jason McCleery said following the 60-46 loss. “We were in it. We competed. They don’t make nine threes. It's a different ballgame. We left some points on the court tonight, which unfortunately we have been doing all season, whether it’s at the free throw line or turnovers.”

Patterson cut it to as close as 48-40 with 1:25 left in the third frame, but by the end of the quarter the Tigers looked up at the scoreboard to see they were down 52-41.

The Gauchos did not hesitate to shoot the ball from deep. In total, El Capitan made nine three-pointers against Patterson.

Freshman Brody Collins and junior Joe Serena finished with 17 points each. Senior Dillon Greenwood had 12 points for El Capitan in the win.

“They shot the ball lights out. When you got guys stepping out to NBA range and hitting threes in our face there is nothing you can do,” McCleery said.

Junior Logan McCleery finished with 10 points and a rebound.

The Tigers got back in the win column when they faced Central Valley on Jan. 15, ending a six-game losing streak (the most in a row this season).

It took until overtime to decide the winner, but Patterson edged out a narrow 57-56 overtime win to escape with the victory.

The Tigers won the first quarter by one point up 10-9, but an even heat in the second quarter meant the Tigers owned a 23-22 lead at the break.

The Hawks responded with a 23-18 win in the third frame, holding a 45-41 heading into the final quarter. Patterson made up the difference with an 11-7 fourth quarter effort, resulting in the two squads needing an overtime period to decide the winner.

Points were hard to come by, but Patterson’s 5-4 effort meant the Tigers would leave Central Valley High with a 57-56 win.

Junior Cris Delgado was 5-10 from the field for 16 points, one rebound and two steals.

Junior Yannick Andzuouana had 10 points and two assists on 5-11 shooting. Andzuouana led the Tigers on the boards with seven rebounds. He also had a team-high four steals and three blocks, in one of the best all-around games from the junior this season.