Skip to main content
You are the owner of this article.
Edit Article Add New Article
You have permission to edit this article.
Edit
Welcome, Guest
News
Opinion
Community
Sports
Connect
Advertising
Services
Info/extras
Classifieds
1 of 9 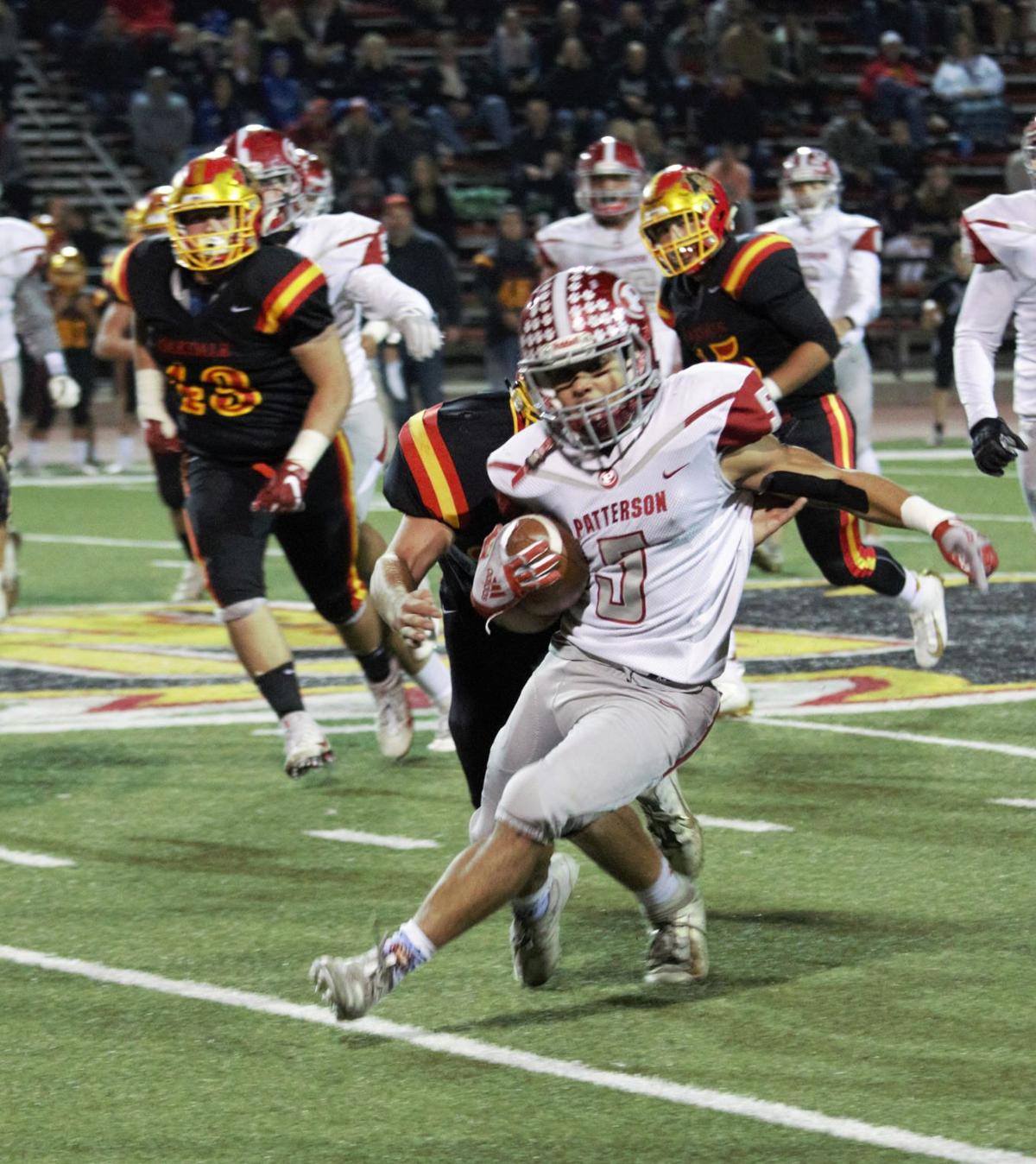 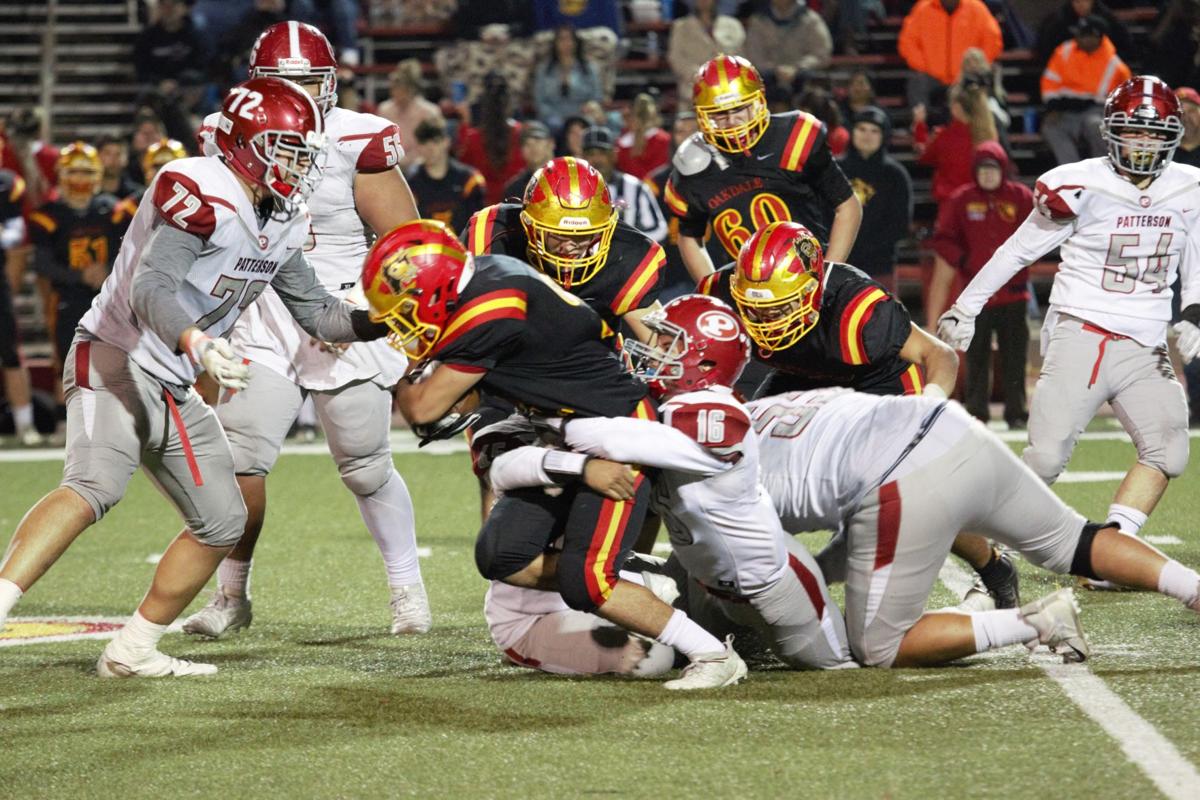 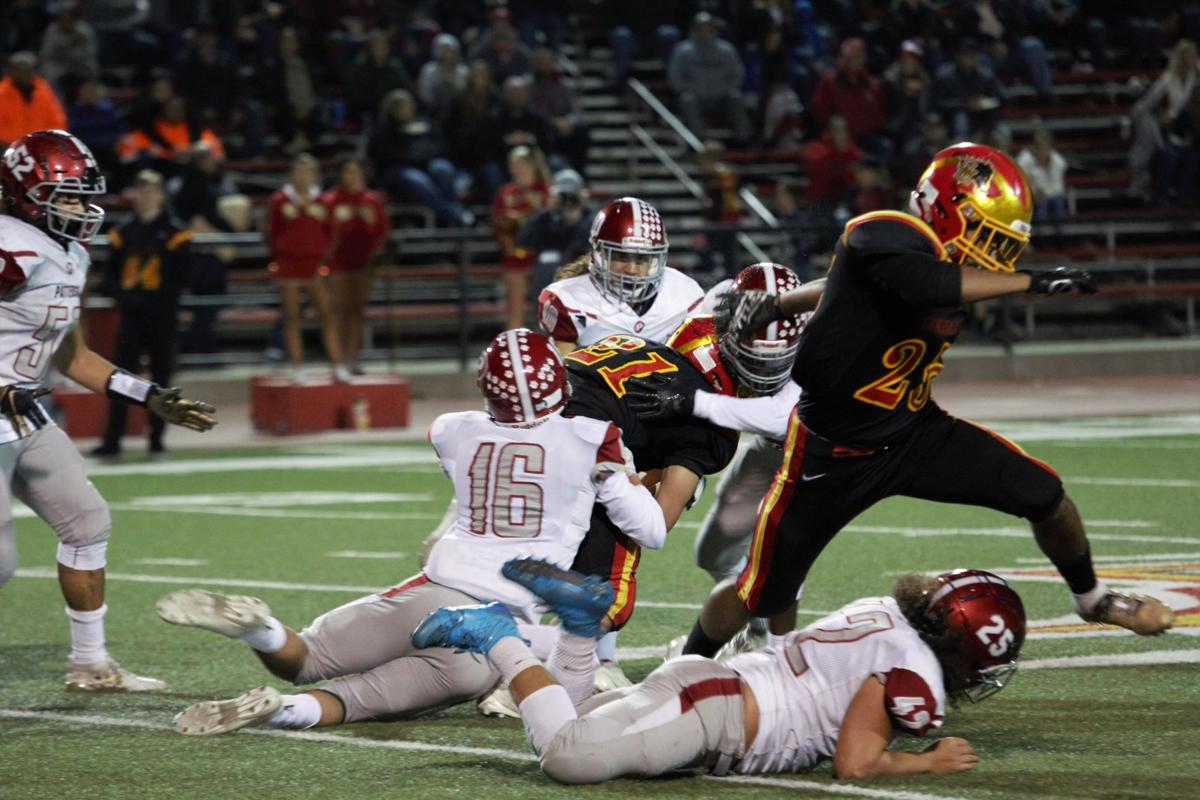 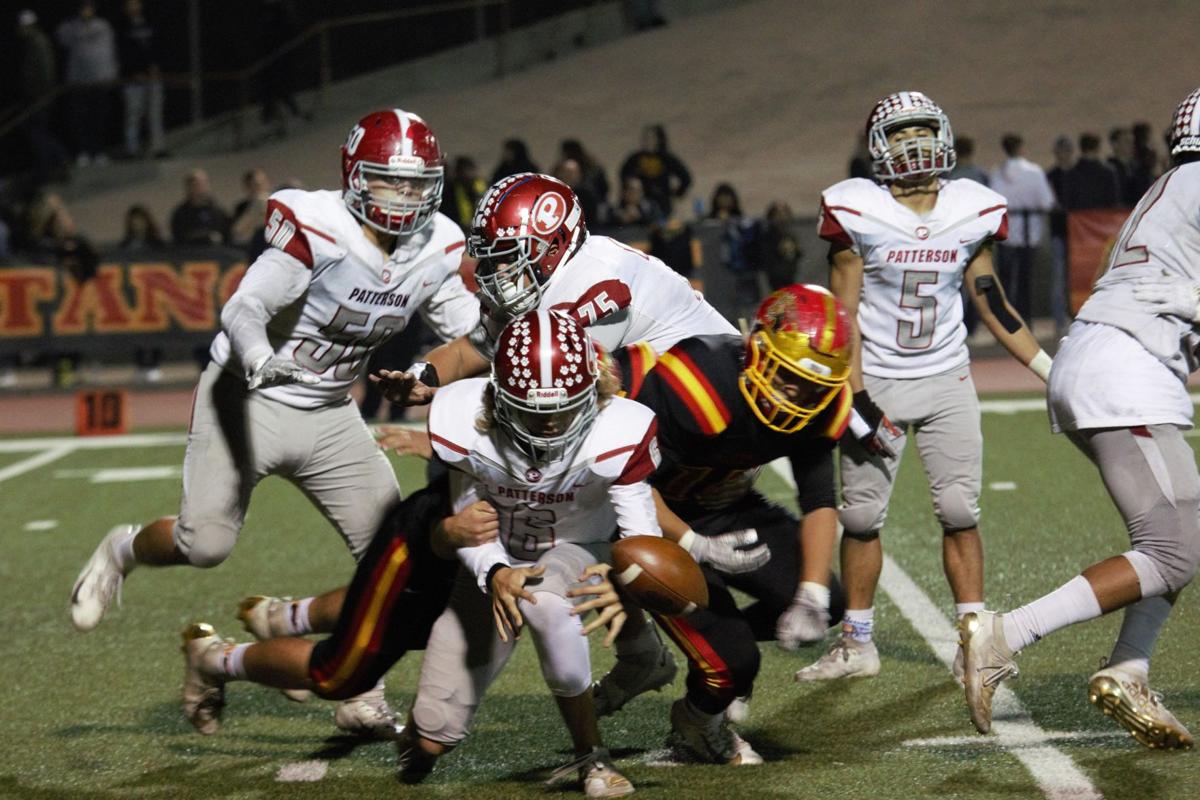 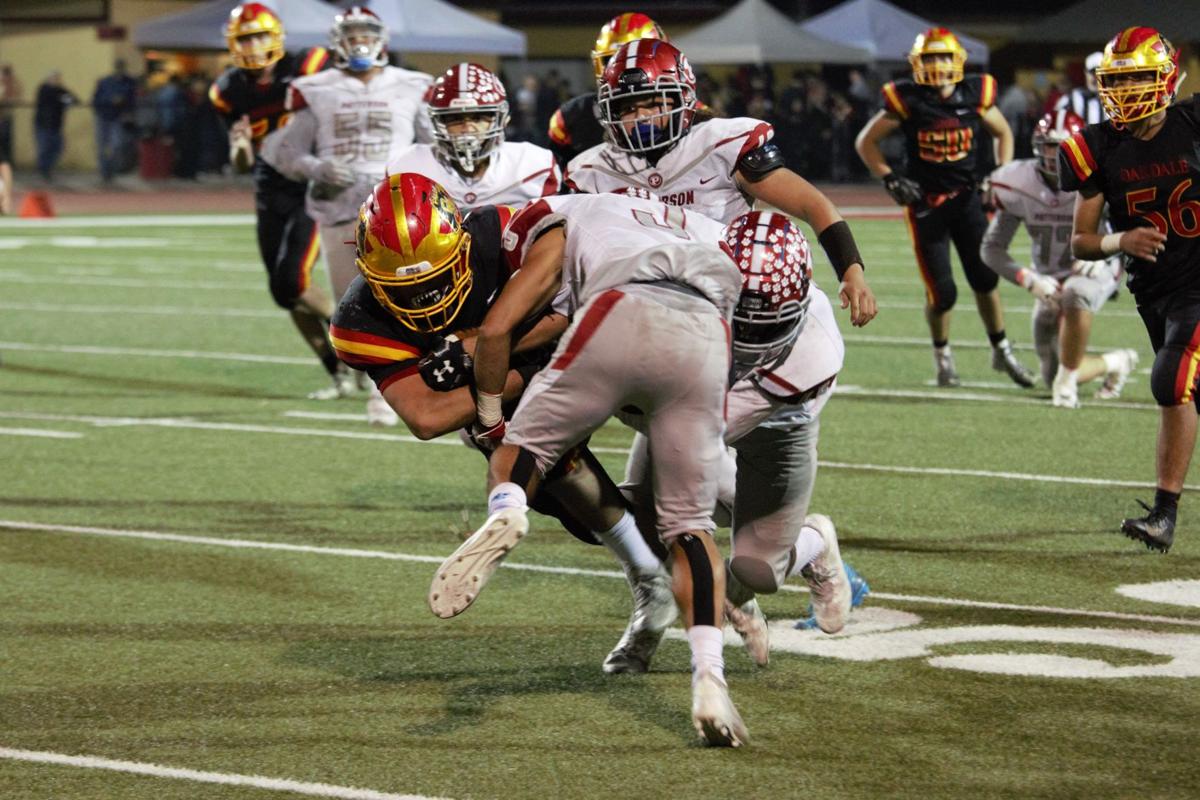 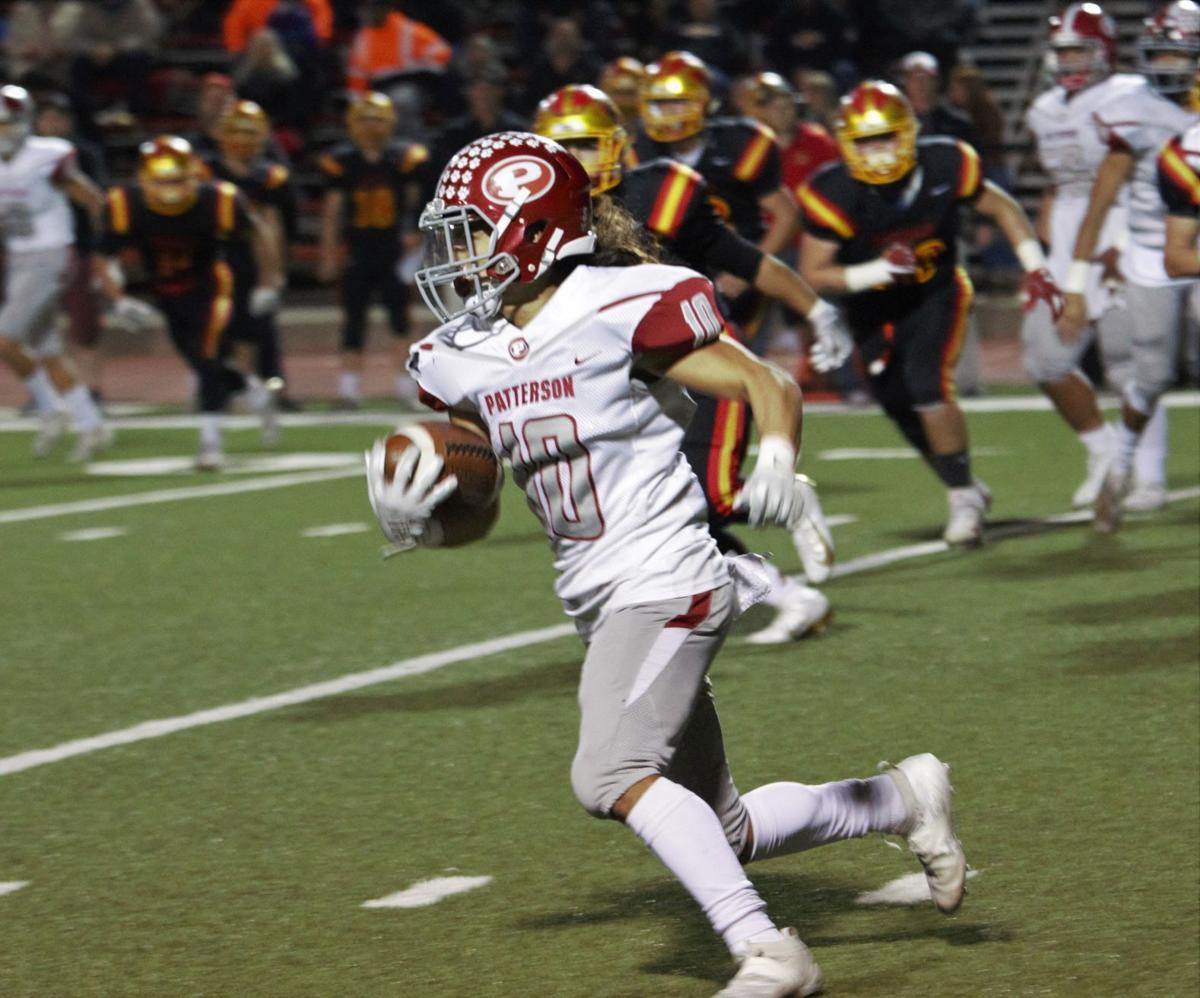 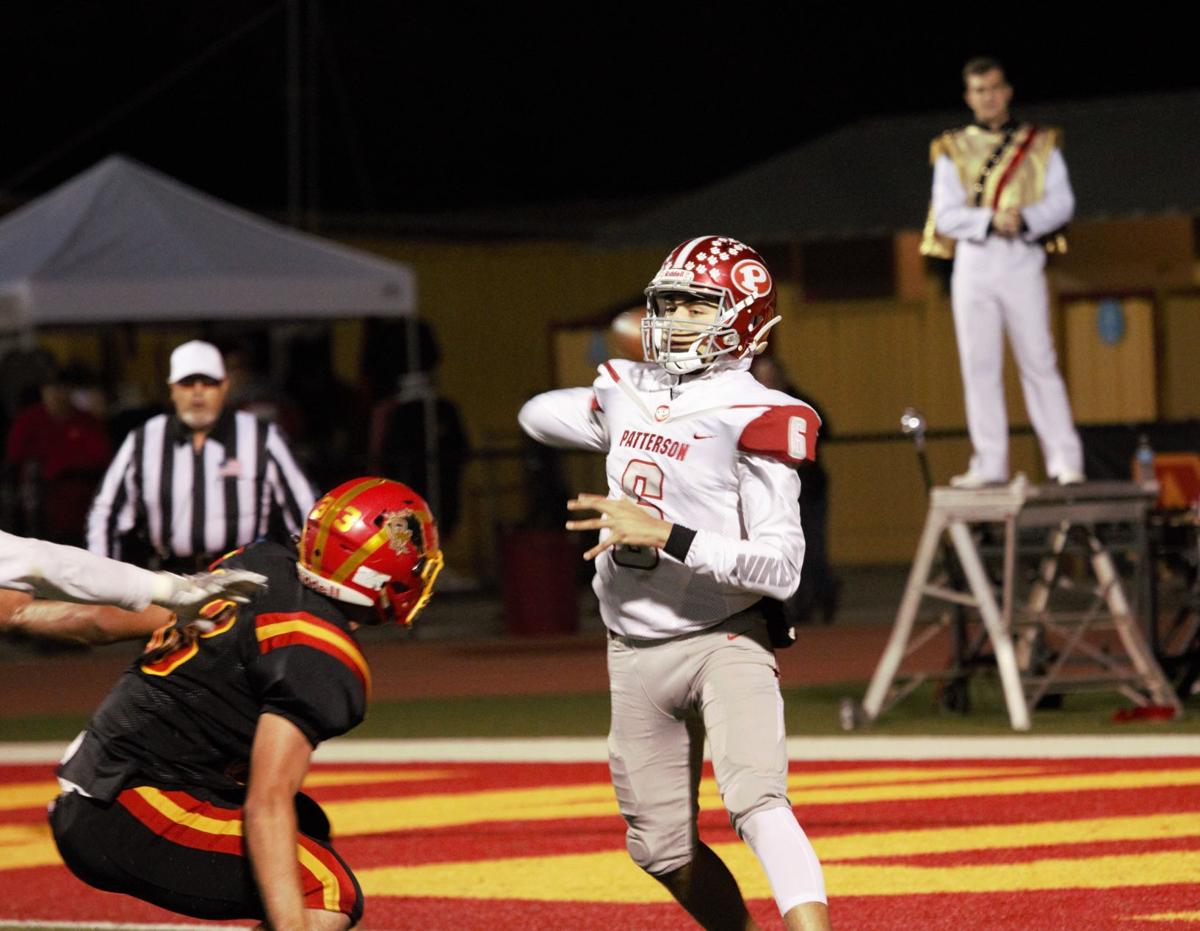 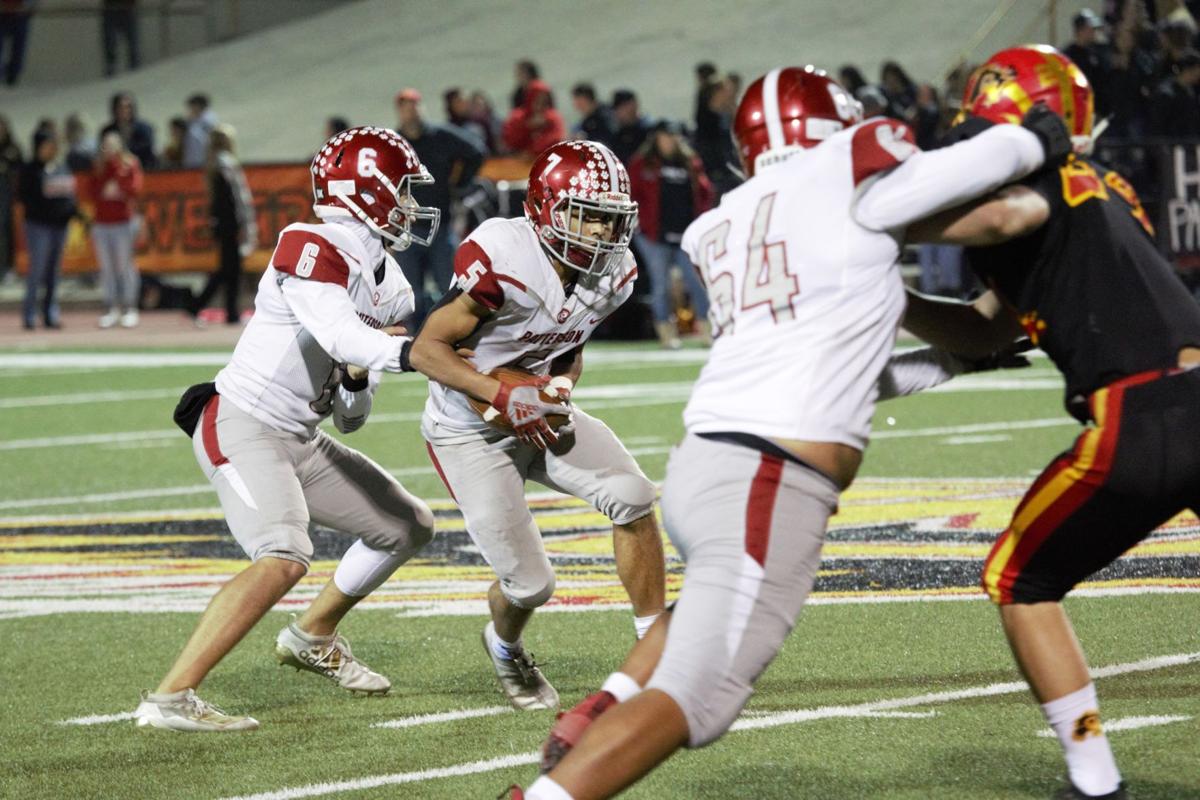 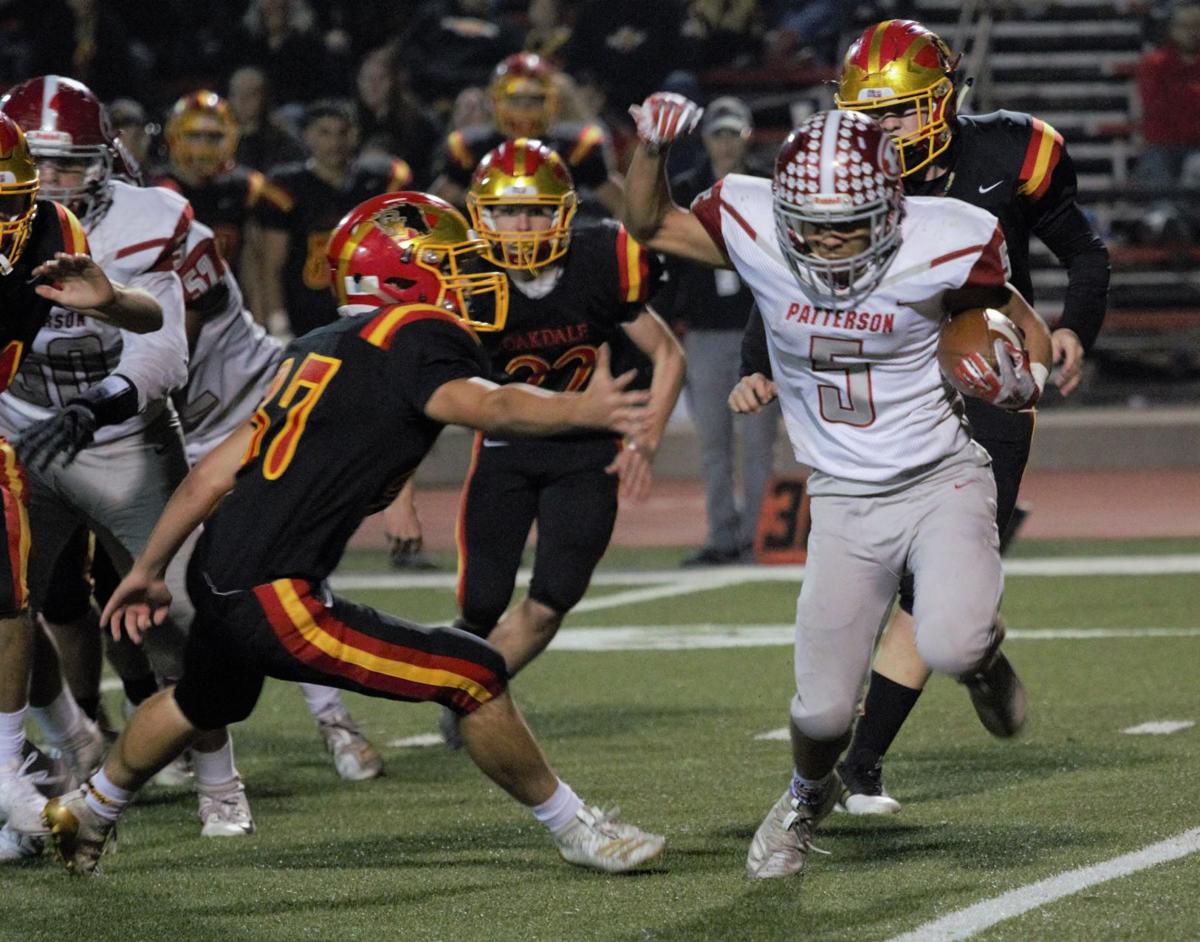 The ship was leaking with injuries, but the Patterson High coaching staff patched up the roster where they could and took the field looking to give the Mustangs their best shot in the quarterfinal round of the Sac-Joaquin Section Division IV playoffs.

The game was dominated by Oakdale’s potent run game; the Mustangs ran wild during their 67-21 victory over the Tigers on Friday, Nov. 15 at The Corral.

Junior Zeke Saffar led all running backs with 23 carries for 202 yards and two touchdowns. Teammate Leo Ayala was equally as impressive. The senior ran 192 yards on 19 carries for two touchdowns. Overall, the Mustang offense averaged a whopping 7.8 yards per carry in Friday’s matchup.

“Ultimately our defense was not getting the stops that we needed,” head coach Rob Cozart said after the defeat. “You couple that with not having a run game in the entire first half. It’s just little things here and there, and it kept steamrolling us. We kept fighting until the very end, until literally the clock ran out and we couldn’t go out anymore. Our season went down just like that. Our guys fought until the very end, and we are so proud of that.”

Cozart explained that this week’s practice heading into their quarterfinal matchup was tumultuous. Players up and down the roster were dealing with injuries, ranging from nagging to concerning. He explained that working on rehabilitation as well as preparing for a high-quality opponent in the limited time allotted for practice after school hours was difficult.

Against a team as strong as Oakdale, dealing with rehabilitating players from questionable to playing was a task that stressed the foundation of a roster that was already thin to begin the 2019 season.

“It’s just one of those things. We weren’t as deep. We didn’t have the deepest roster, so we ended up having to do a lot of adjustments,” Cozart said. “We practiced two hours a day after school every day. We aren’t blessed with an athletic P.E. where we can do stuff during the school day, and it shows up in a game like this where you are hobbled; you are low on numbers. We aren’t drawing things up in the sand. We are coaching up the guys that are there and getting them ready to the best of our abilities. That’s all I asked the guys to do before the game and at halftime. To give their best to themselves. Just do your job and do your very best to yourself, and you can’t hang your head when that happens.”

Running back standout Obadiah Godbolt was one of the many Tigers, including many players on the offensive and defensive line, just looking to get healthy before Friday’s game.

Godbolt’s status during the week was questionable, but after a full practice on Thursday, the senior proved he was as ready as he could be.

Godbolt showed flashes of his brilliance, with 13 carries for 120 yards and two touchdowns.

Fellow running back junior Jordan Imada was not able to finish the game due to an injury in the first quarter. His night was cut short after just one carry for the Tigers offense.

Junior Logan McCleery was limited to 17 passing attempts against Oakdale, completing seven of them for 99 yards and one interception.

Sophomore Javier Huizar was the top receiver in the game, with five catches for 80 yards and a touchdown late in the fourth quarter. The passing touchdown was a bright spot amidst gloom late in the game.

Cozart shared that the connection between McCleery and Huizar will be a pairing that will be critical moving ahead into 2020. His expectations for his quarterback and his entire squad will be even higher next season.

“That’s something I want to see. I want to see that connection be improved, strengthened, worked on and maintained throughout the offseason and going into next season,” Cozart said. ‘Expectations are going to be high. I expect him (McCleery) to put a lot of work in the offseason. I know he is a busy kid. He plays basketball and baseball, but if this is something he wants to excel at, and this is something he wants to make a statement with, then he needs to put in the work, and that doesn’t just go for him, but that goes for anybody that is coming back and doesn’t want to have this taste in their mouth.”

After stalling out on their opponent’s 49-yard line, Patterson was forced to punt after the opening drive of the game.

Oakdale began their drive backed up to their own four-yard line, and after two failed offensive plays were forced into a precarious third-and-nine situation to open up the game. The Patterson defense was presented with an opportunity to get the Oakdale offense off the field, but instead the Mustangs extricated themselves out of danger with a 16-yard pass and run, and to compound the damage done, the Tigers defense was flagged for a 15-yard penalty, moving the ball from the four-yard line to the 35-yard line in the span of one critical play.

“We had them in a third-and-long situation and we didn’t play tight enough coverage, and they were able to convert. The air kind of went out of our sails a bit. Then their run game was just on,” Cozart said.

It was too early to tell at the time, but that unfortunate series would turn out to be a theme in the loss.

Oakdale’s ability to respond in several third down situations was a difference maker. Patterson was unable to get the Oakdale offense off the field with regularity, forcing only one punt in the loss.

That bit of breathing room early was all the Mustangs needed. By the end of the first frame, the home team was up 14-0.

The Tigers trailed Oakdale 24-7 with 5:07 left in the second frame, when Godbolt broke free for a signature run that spanned 65-yards for a touchdown. It appeared that Patterson found the spark they had been looking for.

That would have improved Patterson’s standing down 24-14, but a penalty all the way back near the line of scrimmage erased what would have been a monumental development for the Tigers.

To the jeers of Patterson fans in attendance, the ball was brought back and celebration quickly gave way to consternation.

It was yet another moment where Patterson would endure a setback in a game that had little room for error to begin with.

Instead of a touchdown, the Tigers were forced to punt four plays later. Rather than being down 24-14, Patterson looked at the scoreboard at halftime, finding themselves down 31-7.

Oakdale opened the second half with a 29-yard touchdown run from Saffar to increase that lead to 38-7, and never looked back. They advance to the CIF Sac-Joaquin Section Division IV semifinals to host Merced High on Nov. 22.