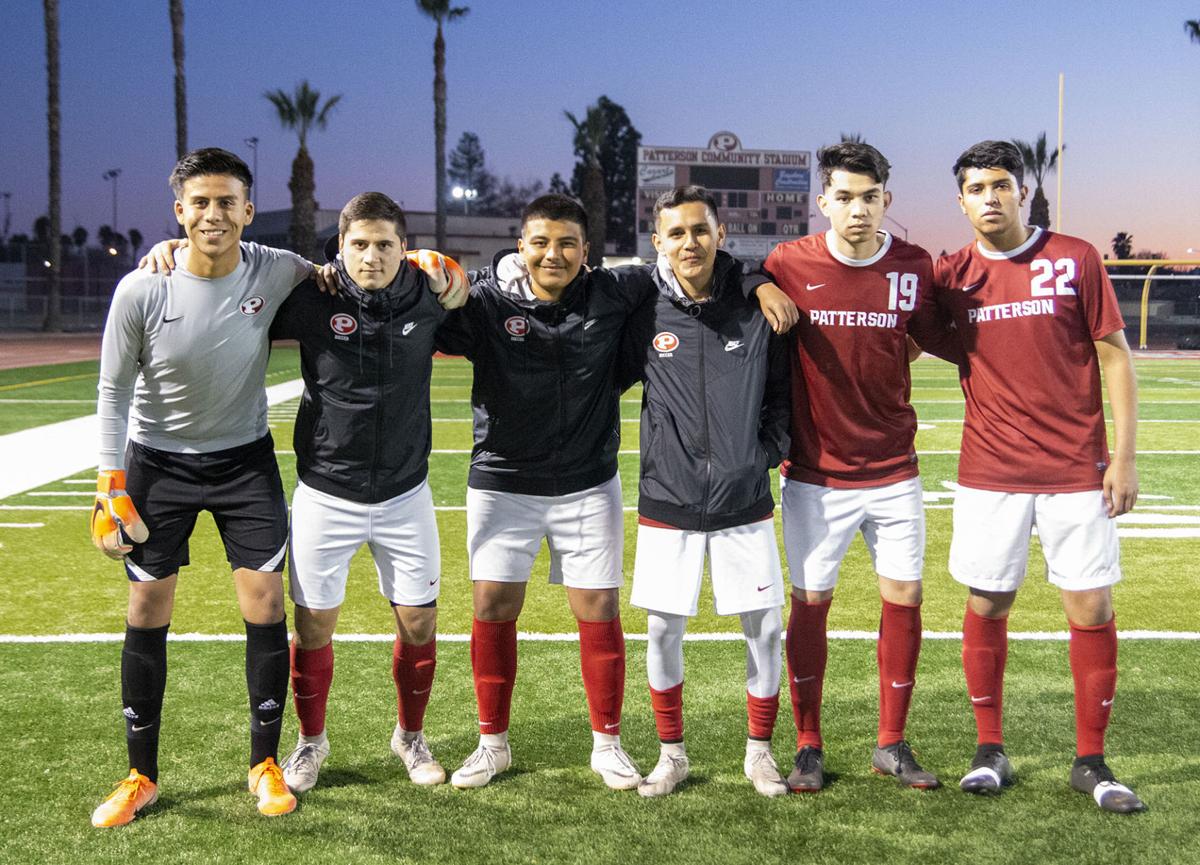 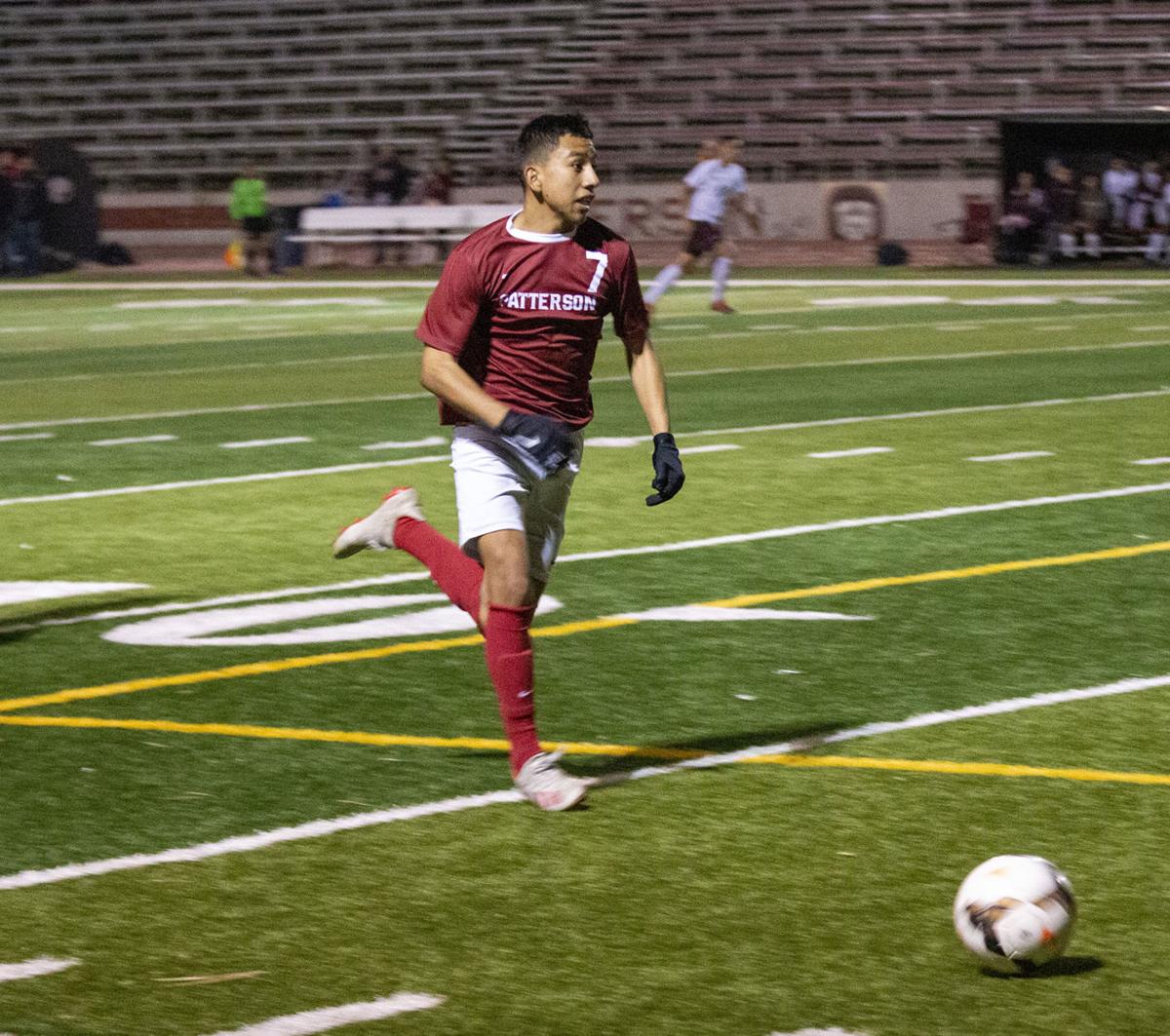 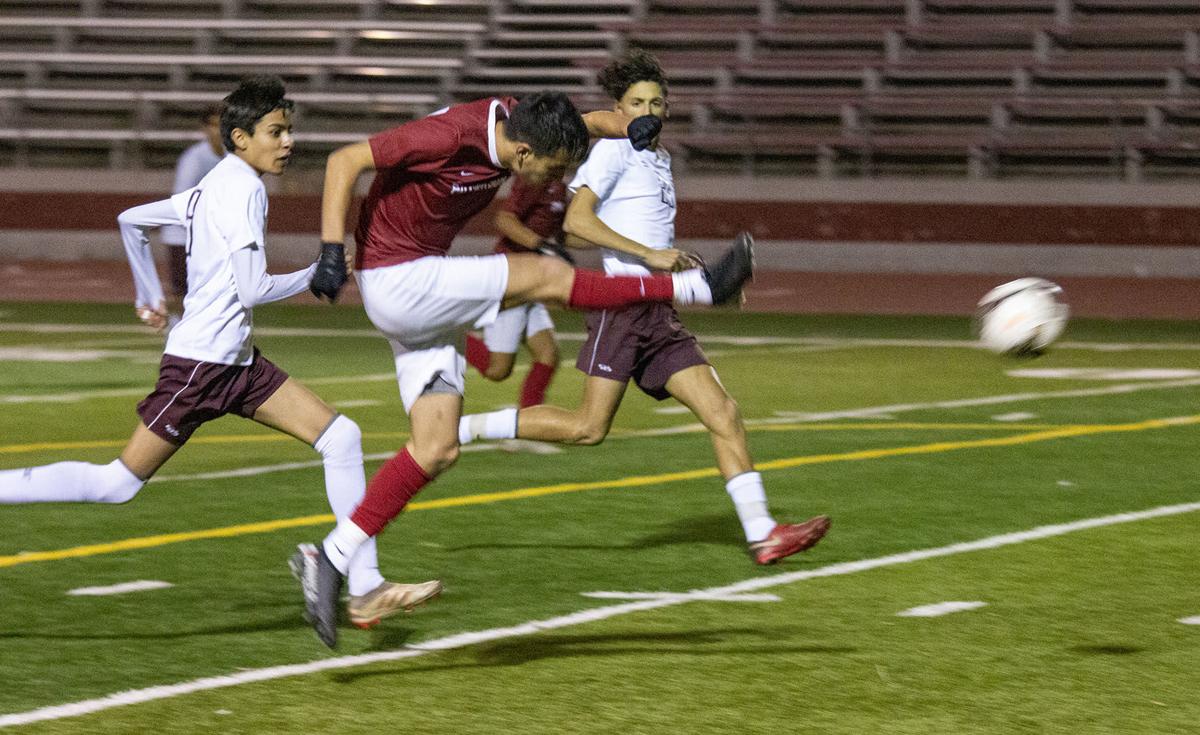 Sophomore Jonathan Mendoza unleashes a shot on goal that would slip past the goalie for a score. 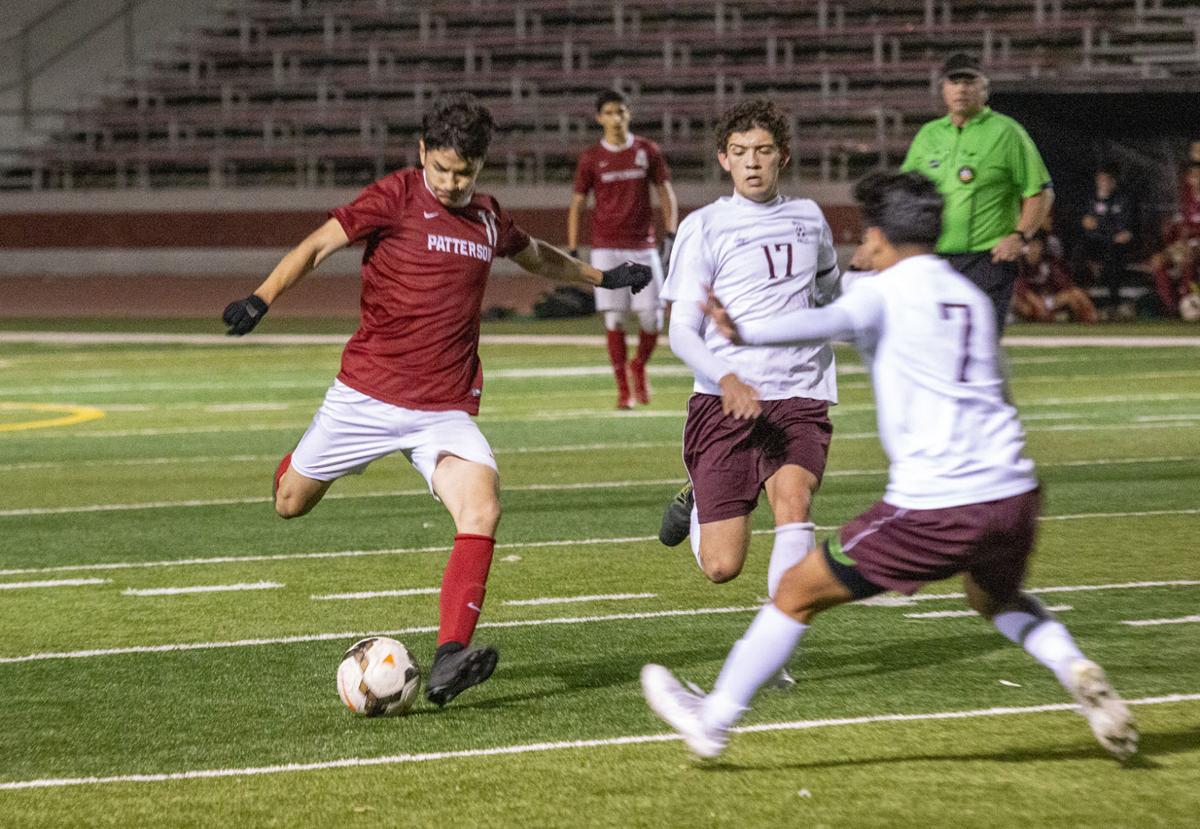 Sophomore Antonio Gallegos plants his left foot for a kick on Feb. 6 at Patterson Community Stadium.

Sophomore Antonio Gallegos plants his left foot for a kick on Feb. 6 at Patterson Community Stadium.

Last Thursday was the Patterson High boys varsity soccer team’s senior night, signaling the final home game of the regular season, but with a 4-0 win over Golden Valley, the Tigers are certainly hoping to earn the chance to play at home again this season.

Every win is significant for the Tigers. Although a second-place spot (top four places advance to playoffs) in the Central California Conference is secured, Patterson still aspires to earn the highest seeding possible and thus another home match.

A clean sheet against fourth-place Golden Valley last Thursday had the Tigers heading into the final week on the right foot.

“They’re doing a lot better. It’s been a challenge for the kids to stay mentally focused. They understand the season is coming to an end and there is no room for error. If they want to go to playoffs, then they need to play the same way they are now. Stay consistent, score goals, and play well defensively,” head coach Luis Torres said following the win on Feb. 6. “This is the way we want to keep playing.”

No doubt the Tigers have been on a roll as of late. Since their 3-3 tie with El Capitan on Jan. 21 and their loss to Central Valley on Jan. 23, Patterson has won four in a row.

In those four games, the Tigers have blasted past their opposition, outscoring their opponents 16-3.

For the second straight game, the Tigers also had four different goal scorers.

Sophomore Jonathan Gallardo scored in the 11th minute. Sophomore Antonio Gallegos gave the Tigers a 2-0 lead heading into halftime, with a goal in the 38th minute.

Patterson kept their foot on the gas in the second half.

Senior Ricardo Jimenez tacked on a goal in the 65th, while senior Oscar Rodriguez finished the game off with a penalty kick goal in the 74th minute.

“Our wingers and forwards are phenomenal. We have speed. We have good technical work, so any plays, any set pieces, I think we are dangerous all around. It shows. Everyone is scoring,” Torres said of his offense. “We have our two or three guys that are always assisting and scoring, but we are getting more offensive players involved on the score sheet.”

The Tigers defense came up big when they were under duress, thwarting a corner kick opportunity in the 37th minute, and goalkeeper Miguel Cortez made a nice save in the 45th minute when the initial shot ricocheted off the crossbar back to the Cougars offense. A second shot attempt was on target, but Cortez was there to swallow it up with a sliding tackle, voiding the opportunity.

Golden Valley was awarded a free kick in the 49th minute, but the Patterson defense ensured the penalty did no harm. Golden Valley had attempts in the 58th and 61st minutes, but both attempts missed wide.

With Patterson and Central Valley both winning on Tuesday, the top two spots of the Central California Conference are locked in. Patterson will not have enough games left to catch Central Valley, meaning the Hawks will be the 2019-20 CCC Champions. Patterson, regardless of how Thursday’s matches play out, will be the runner-up.

The Tigers defeated the Thunder 4-2 on Feb. 11, thanks in part to two goals from sophomore Johan Mendoza.

Gallardo scored his 14th goal of the season and Gallegos scored for the second game in a row.

Jimenez was credited with two assists, bringing his team high total to 13. Juniors Nathanael Farah and Prabnoor Singh had one assist each.

Patterson will finish the season at El Capitan on Feb. 13 at 3 p.m.

Playoffs are scheduled to begin on Feb. 18. Brackets for the CIF Sac-Joaquin playoffs will be announced this weekend. Further information was not available as of press time.