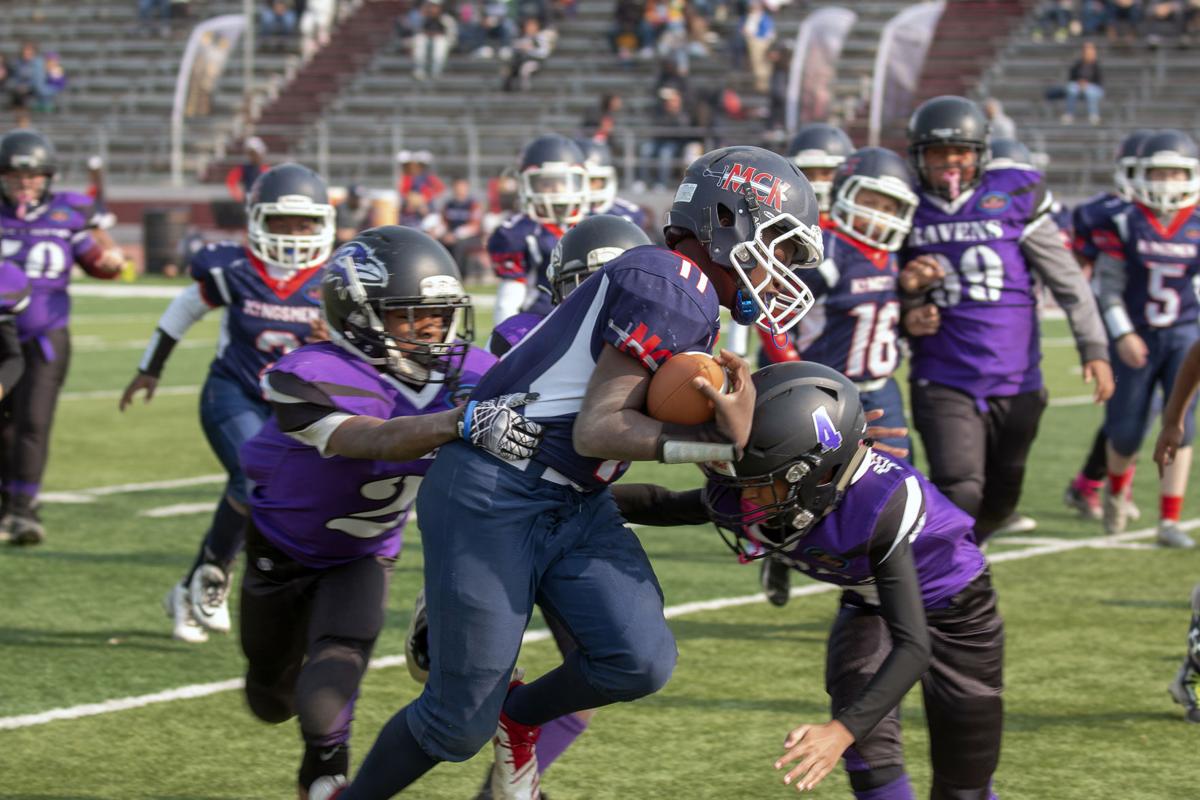 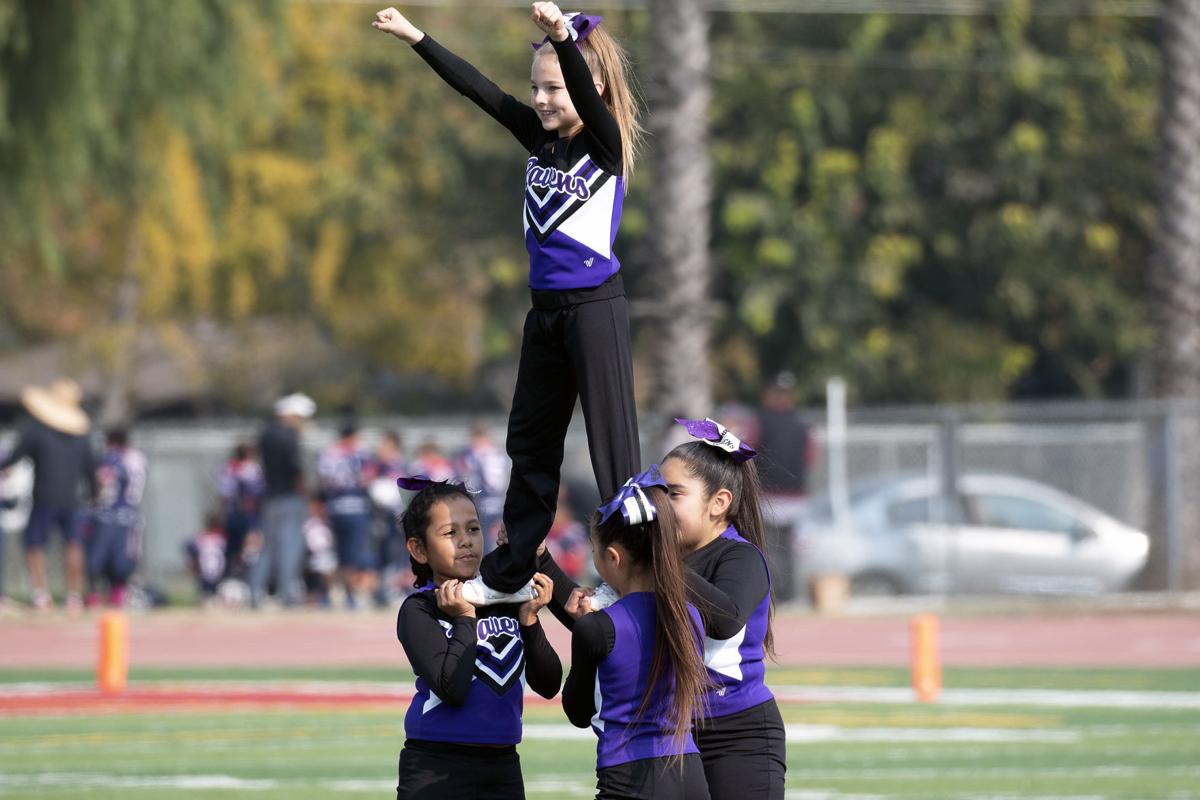 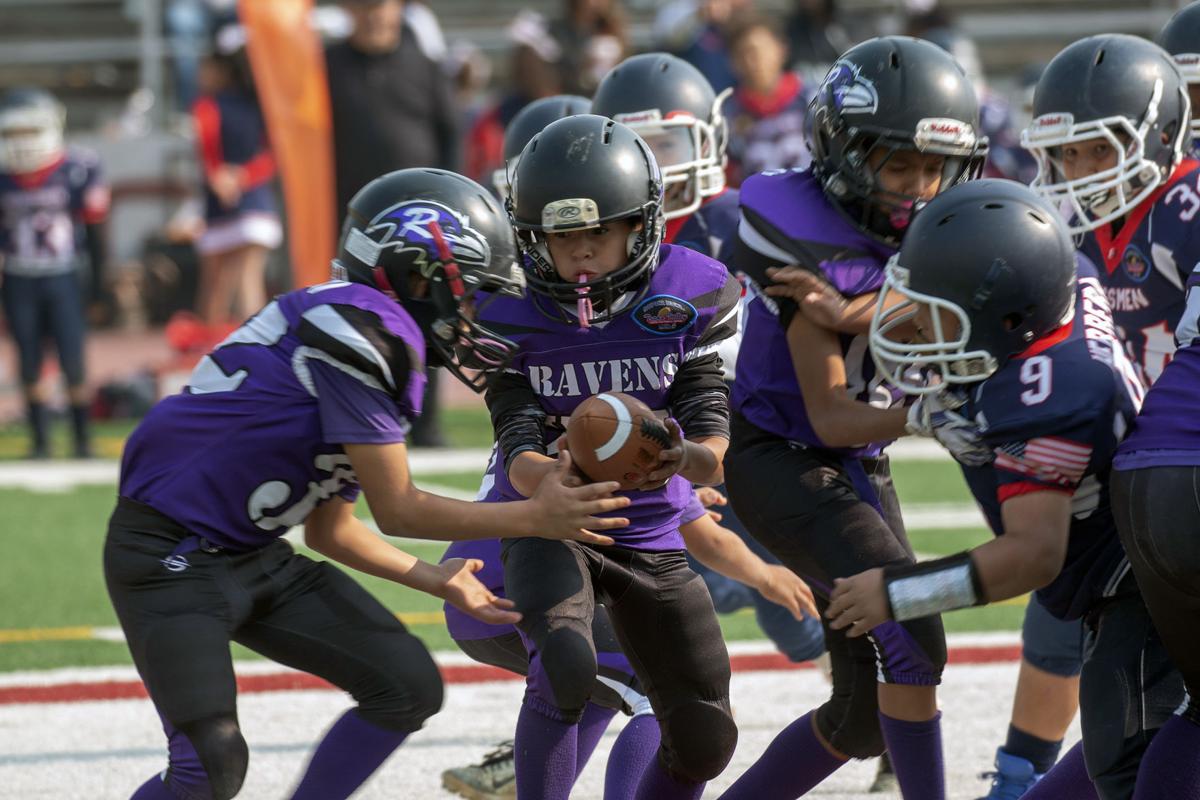 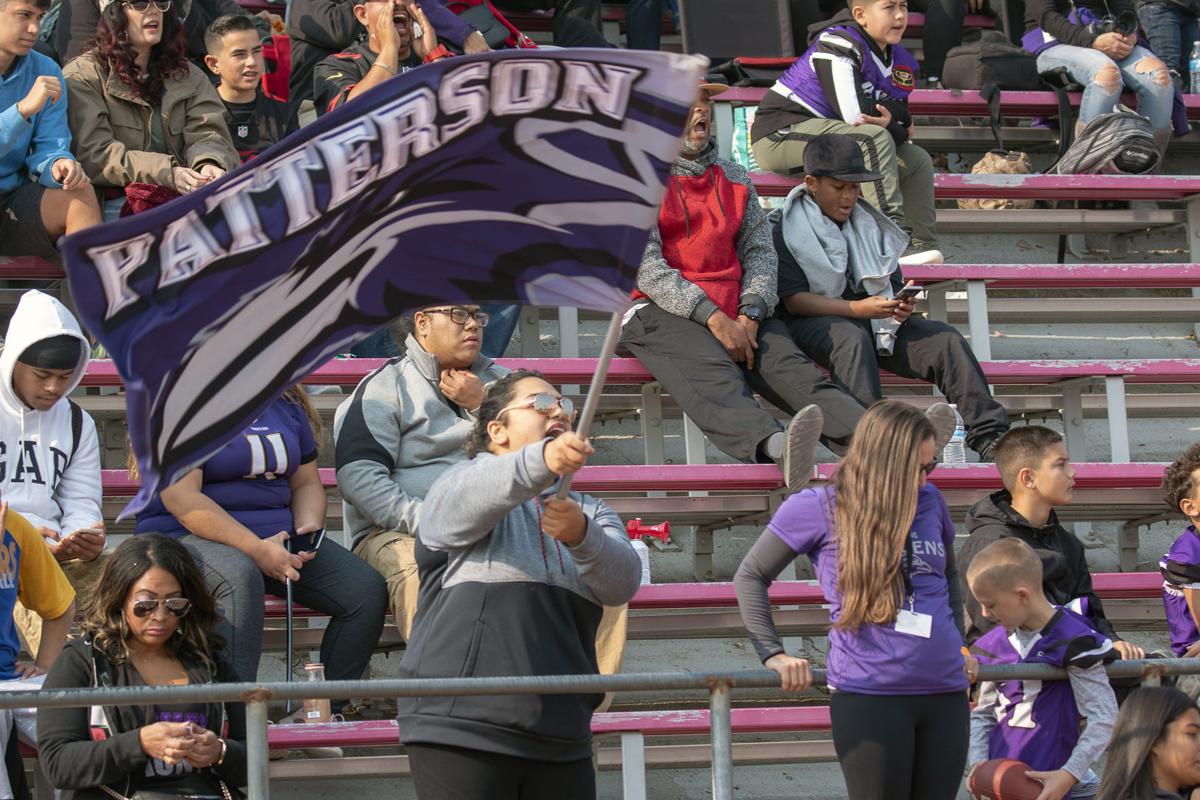 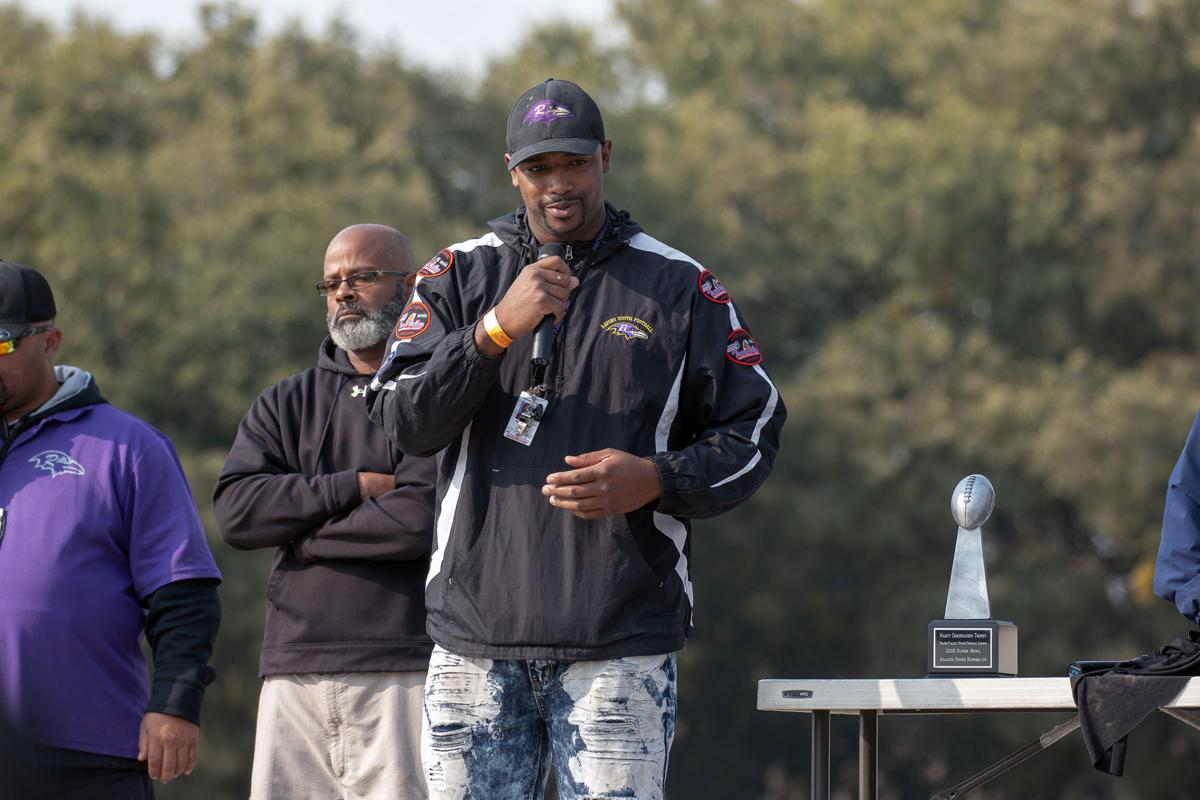 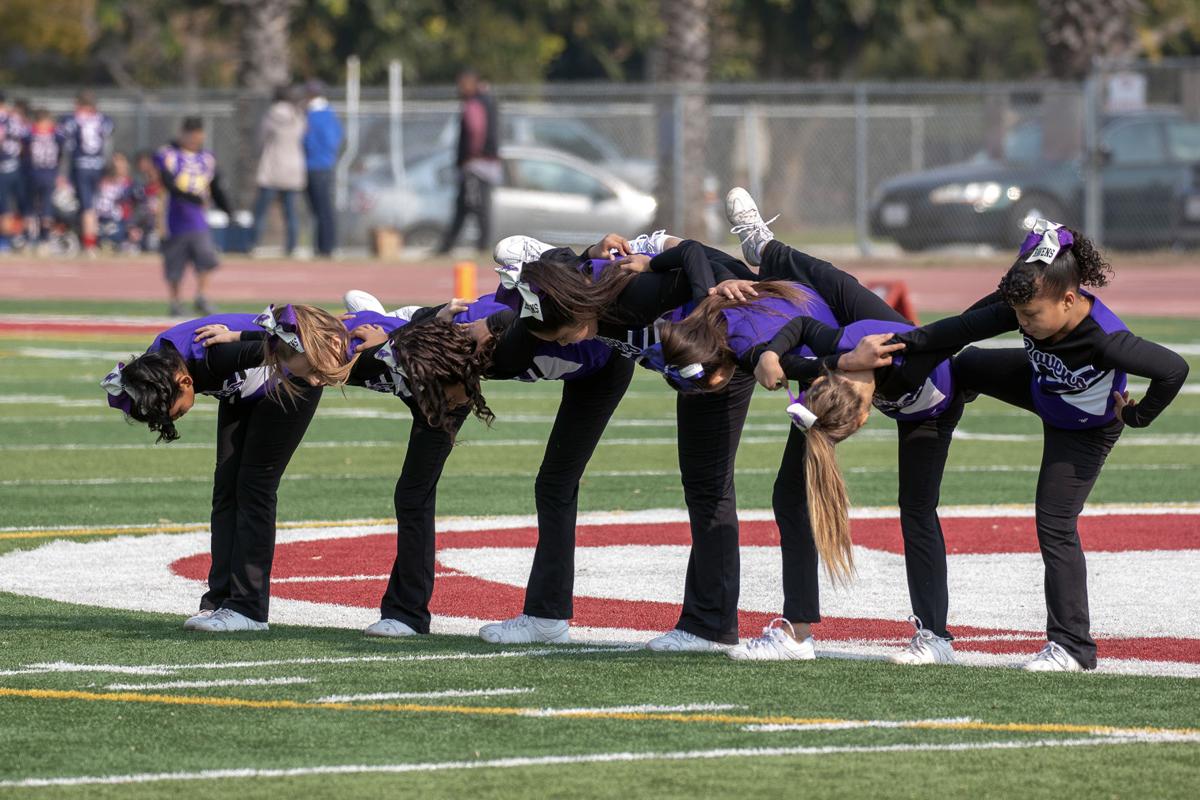 TVYFL Vice-President Joe Powers explained that the organization held a league-wide bidding process to see where this year’s event would land, and the Patterson Ravens youth football organization submitted a proposal for Patterson Community

Stadium to be the site for the 2018 Super Bowl. After a league-wide vote was held, Patterson was chosen as the host.

“Been a great couple of days for football,” Powers said. “We’re very happy. The field looks great. It’s a great day. Everybody is happy.”

A total of six games were held across two days. The TVYFL is split into two conferences (Atlantic and Pacific), divided by four age group divisions (junior novice, novice, junior varsity and varsity). The junior novice age group did not play at Patterson Community Stadium over the weekend, but were honored with a trophy ceremony.

The Patterson Ravens novice team went into Saturday’s game against the Modesto Christian Kingsmen undefeated, yet it was the Kingsmen who came out on top, defeating Patterson by a final of 22-0.

The Kingsmen were aided by a pair of touchdowns from Marcus Simms and a touchdown from Cain Walker.

Kingmsen head coach Adam Lema shared some of his thoughts on the Super Bowl-winning effort from his team.

“These kids are so smart. We’re blessed. We had no speed; that’s kind of (been) a running joke with our team all year long. We played a kind of messy, rough kind of gruff offense, and these kids took to it. They loved it. They were so good,” Lema said. “It was a big deal because, I got to be honest, coming in I didn’t think we would win.”

While the Kingsmen were enjoying the jubilance of victory, the Ravens were reconciling with an undefeated season that could have been.

Ravens head coach Martell Scoggins was very supportive of his squad. “I’m still very proud. I’m not disappointed at all. I’ve seen so many players progress this season….they got a lot of spunk. Win, lose or draw they’re still champions to me,” Scoggins said. “At the end of the day you want to win a trophy, but that’s not always the ultimate goal. The ultimate goal is to teach these kids life lessons, and that’s what we preach over here at the Ravens.”

One aspect both coaches agreed on was the loud support booming from the Ravens fans all game.

“Ravens fans are amazing. They are so loud. I call the plays on the sidelines, and about halfway through the game I had to start having my quarterback run over,” Kingsmen head coach Lema said in regards to the noise level throughout the game. “It’s an attribute to this organization. The Ravens are really good. They’re fantastic. They have a good community program.”

Knights and Kingsmen with strong showing

The Ripon Knights had a strong showing over the weekend. The Knights dominated the Pacific Conference with victories at the varsity, junior varsity and novice levels. The Pacific Junior Novice champions this year were the Big Valley Sabres.

The Central Saints were crowned as this year’s Atlantic Varsity champions, while the Modesto Christian Kingsmen took home titles in the junior varsity, novice and junior novice divisions.