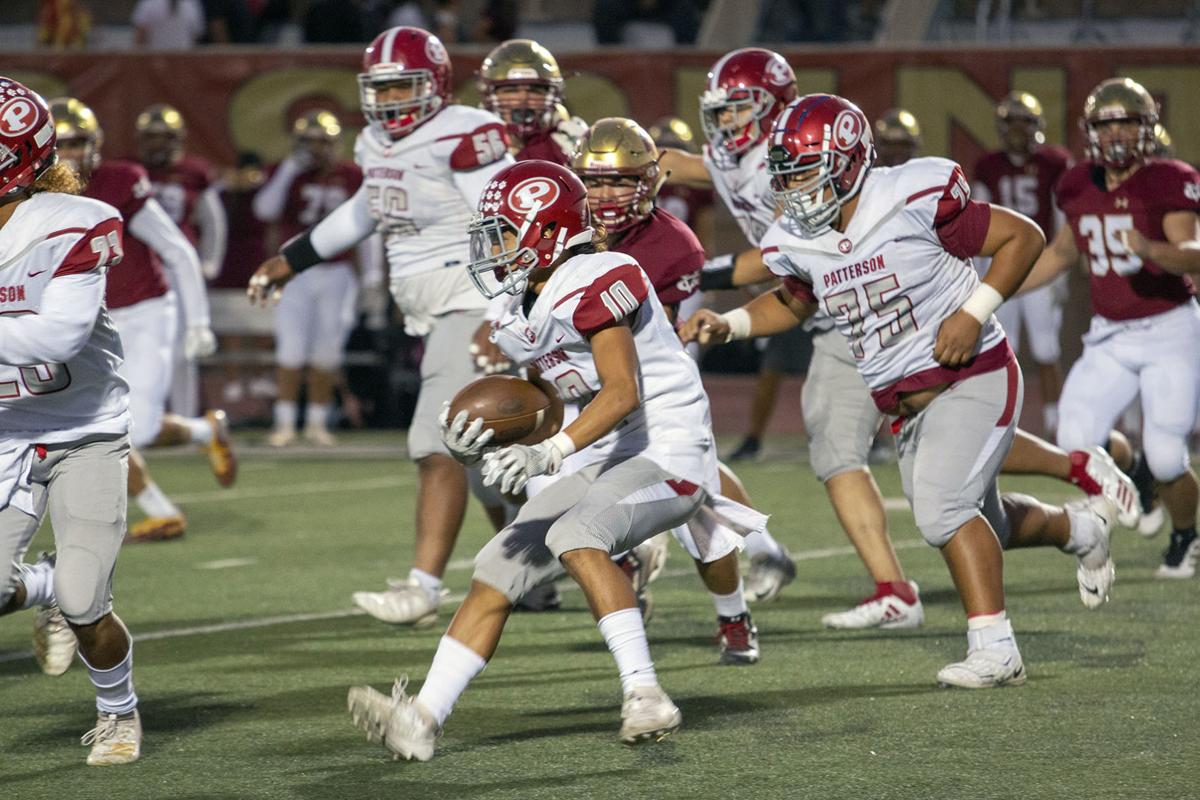 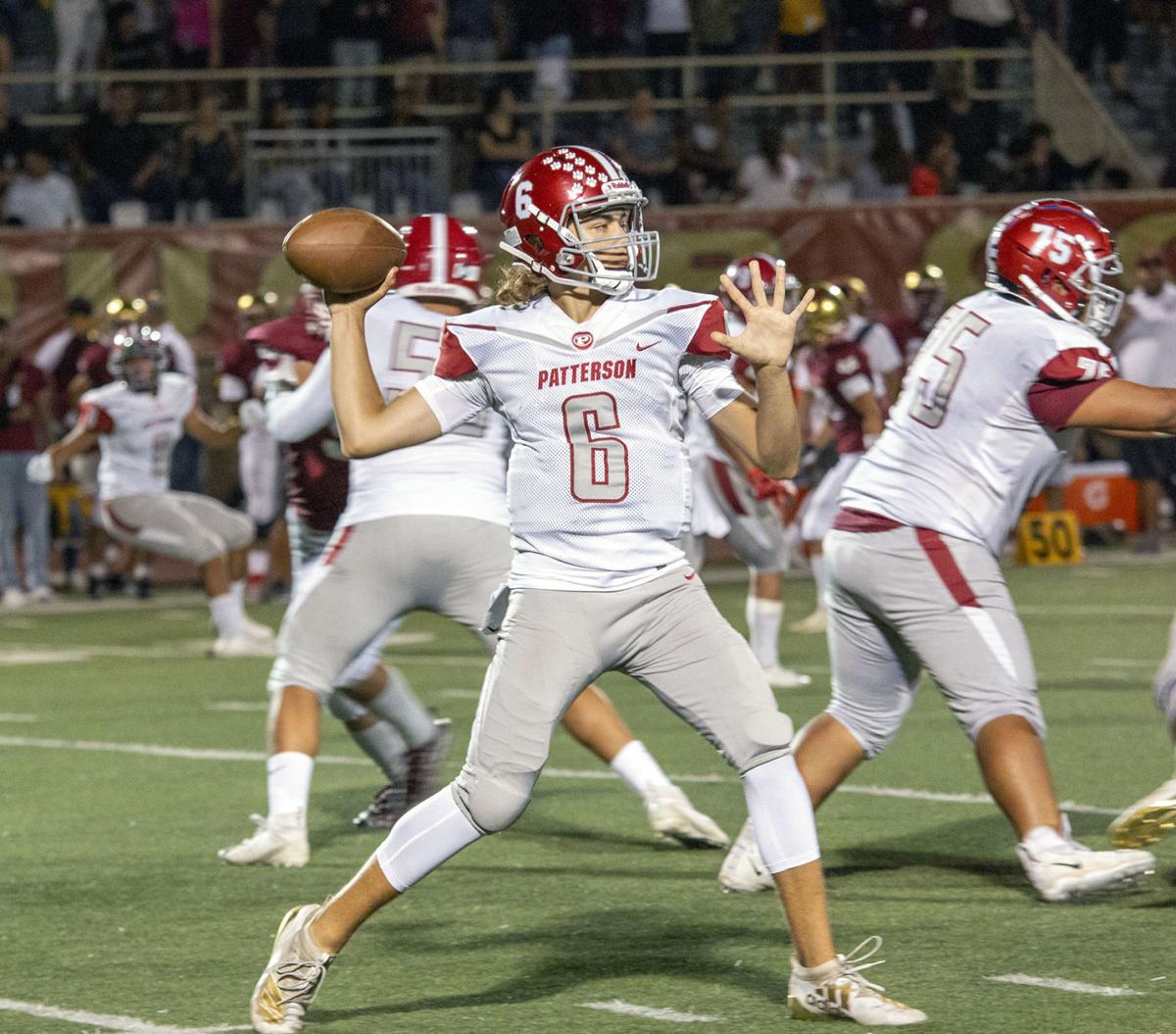 It came down to the final seconds of the game to decide a winner in a back-and-forth affair between Patterson and Golden Valley High School on Friday, Sept. 27 at Veterans Stadium.

The game saw four lead changes, leading to a fateful final drive of the game.

Down 35-31, the Tigers rallied to drive the ball all the way down to the Cougar six-yard line in the closing seconds of the game, but despite four shots at the end zone, could not find a way in, dropping the game 35-31 for Patterson’s third loss of the season.

“There were things that added up,” head coach Rob Cozart said following the loss. “We knew they were going to be competitive and give us their best game. We just can’t spot people multiple drives and multiple points and expect us to be able to turn it on like a light switch and get stuff done.”

The loss brings a lot of uncertainty as Patterson heads into their final four games of the season. With a 3-3 record overall and an 0-2 start in league, the Tigers will have plenty of work to do to maintain the hope of playoff berth.

Golden Valley improved to 3-2 overall and 1-0 in the Central California Conference.

Junior Logan McCleery had a strong game for the Tigers, going 19-31 for 280 yards and a pair of touchdowns.

Junior Miguel Mendiola finished with four catches for 78 yards and a touchdown.

Senior Obadiah Godbolt had one touchdown on nine carries for 41 yards. Overall, the Patterson offense put together 327 yards.

Golden Valley sophomore running back Jabari Phillips had a huge game for the Cougars. He finished with 31 carries for 154 yard and three touchdowns. The sophomore accounted for the majority of the 219 total yards of offense produced by Golden Valley.

Senior Jonathan Peredia was 4-11 for 56 yards and two touchdowns.

Penalties, giving up short field position, dropped passes and missed opportunities all added up against Patterson in their loss, but none of that was apparent in the opening minutes of the game.

The Tigers came out gunning, and found success to open the first quarter.

Junior Logan McCleery opened the scoring with a 27-yard touchdown pass to Huizar, with 9:40 left in the first quarter.

Godbolt backed that up with a slick 13-yard touchdown run to give the Tigers a promising 14-0 lead with 4:56 left in the opening frame.

Patterson was in control to open the game, but Golden Valley had other plans.

The Cougars stunned the Tigers with four touchdowns in the span of eight minutes to completely flip the script.

The bleeding continued for the Tigers when Phillips polished off a drive with a three-yard touchdown run with 9:36 remaining.

An interception from junior Alizha Winzer set up yet another short field position. This time Phillips gashed the Tigers with a 16-yard touchdown run to put the home squad up 28-14 with 7:27 left in the second quarter. All four scoring drives began inside Patterson’s 35-yard line, putting the defense with their backs to the wall regularly in the second quarter.

The Tigers salvaged a turbulent second frame, when junior Adrian Melesio kicked a 45-yard field goal to narrow the deficit to 28-17 heading into halftime.

“Give these guys (Golden Valley) short field and they’ll take advantage of it,” Cozart said reflecting on the 28-point swing. “We just dug ourselves a hole. Couldn’t move the ball on offense in the second quarter for whatever reason. They weren’t doing anything different, we just got real complacent. Guys couldn’t get a push up front. It felt like we had our opportunities and again ultimately penalties come into play.”

Patterson did respond with a push in the second half.

The Tigers were given a huge boost from senior Davante Imhoff, who intercepted a pass from Peredia and returned it 40 yards for a touchdown, for a huge momentum boost.

Golden Valley’s failed field goal attempt turned the ball over to Patterson, and the Tigers capitalized when McCleery connected with Mendiola for a 24-yard touchdown reception to put the Tigers up 31-28 with 4:48 left in regulation, but unfortunately for Patterson that would be the final time they scored.

Patterson stopped Golden Valley’s responding drive, but also were unable to convert on a first down with just under three minutes left in the game, and were forced to punt it to the Cougars.

A healthy punt return set up yet another short field position for the home side, and Phillips delivered what would turn out to be the winning play with a 16-yard touchdown run.

Patterson began their final drive on their own 35-yard line, and managed to keep the crowd on the edge of their seat when they responded by driving the ball down to Golden Valley’s six-yard line. Despite a valiant effort to salvage the game, it was not meant to be for the Tigers.

Patterson will head to Atwater High on Oct. 4 still searching for their first league win of 2019.

Atwater has had a strong season. Under head coach Seneca Ybarra, the Falcons have been impressive with a 5-1 overall record and a 2-0 start in CCC play with wins over El Capitan (48-0) and Central Valley (63-33). Atwater’s only loss came to Lincoln (43-0) in out-of-conference play.

The Falcons average 114.6 receiving yards and 252 rushing yards per game for a total of 21 touchdowns.

Senior Charles Jackson leads the team in rushing, with 42 carries for 468 yards and six touchdowns.

Junior Julius Peacock is not far behind in the rushing category with 38 carries for 400 yards and three touchdowns in 2019. Peacock has also received the majority of the snaps at the quarterback position, going 27-50 with 497 yards and seven touchdowns to three interceptions as a passer.

Senior Nathan Knight has been their top receiver with 11 catches for 298 yards and four touchdowns.