You are the owner of this article.
Edit Article Add New Article
You have permission to edit this article.
Edit
Welcome, Guest
News
Opinion
Community
Sports
Connect
Advertising
Services
Info/extras
Classifieds
1 of 8 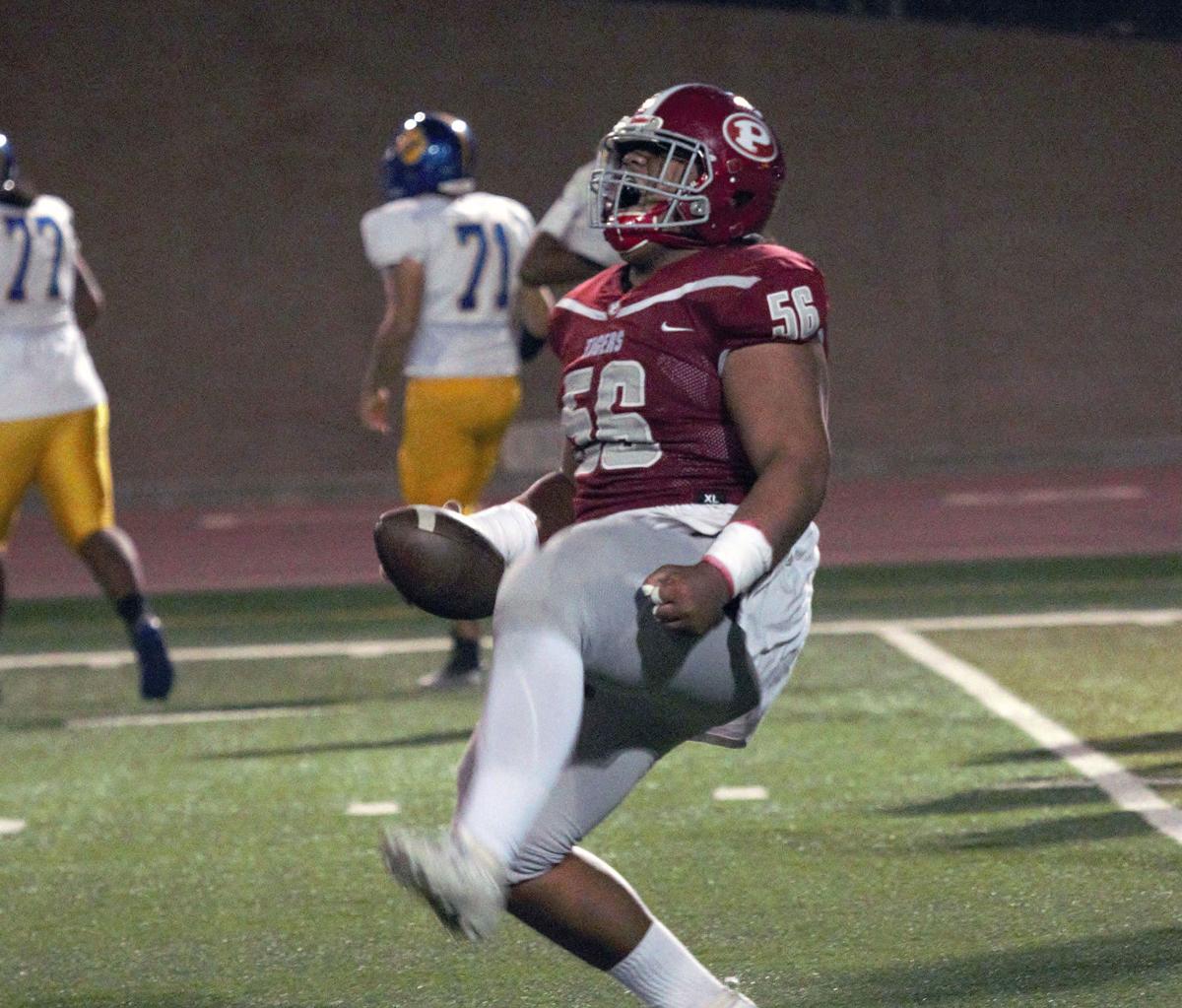 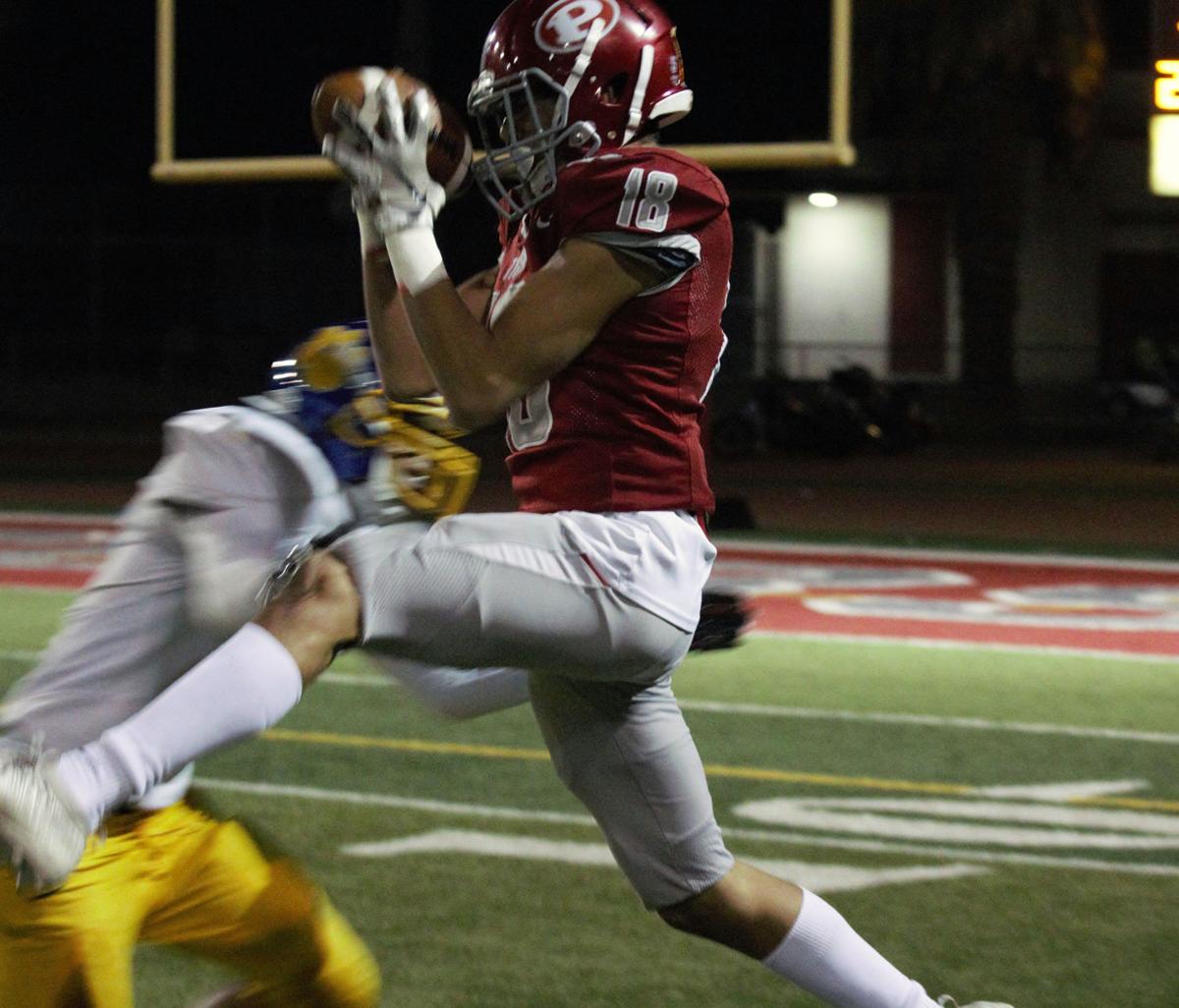 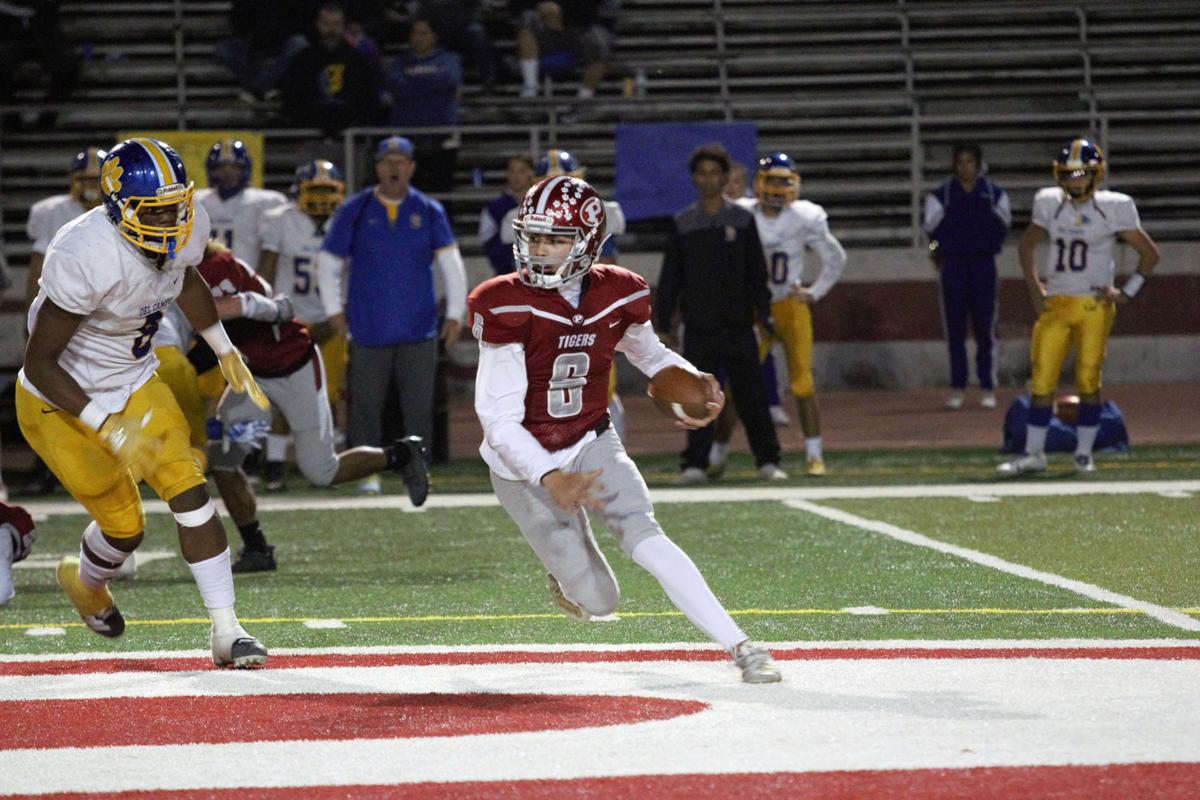 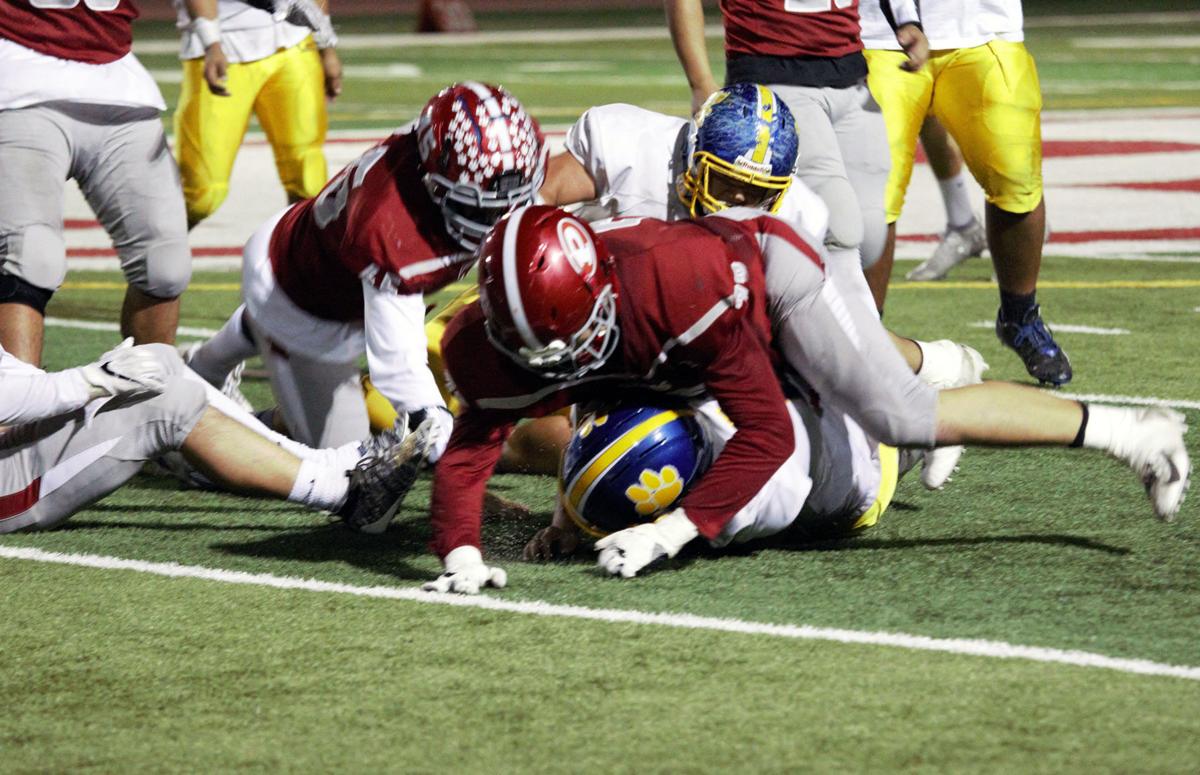 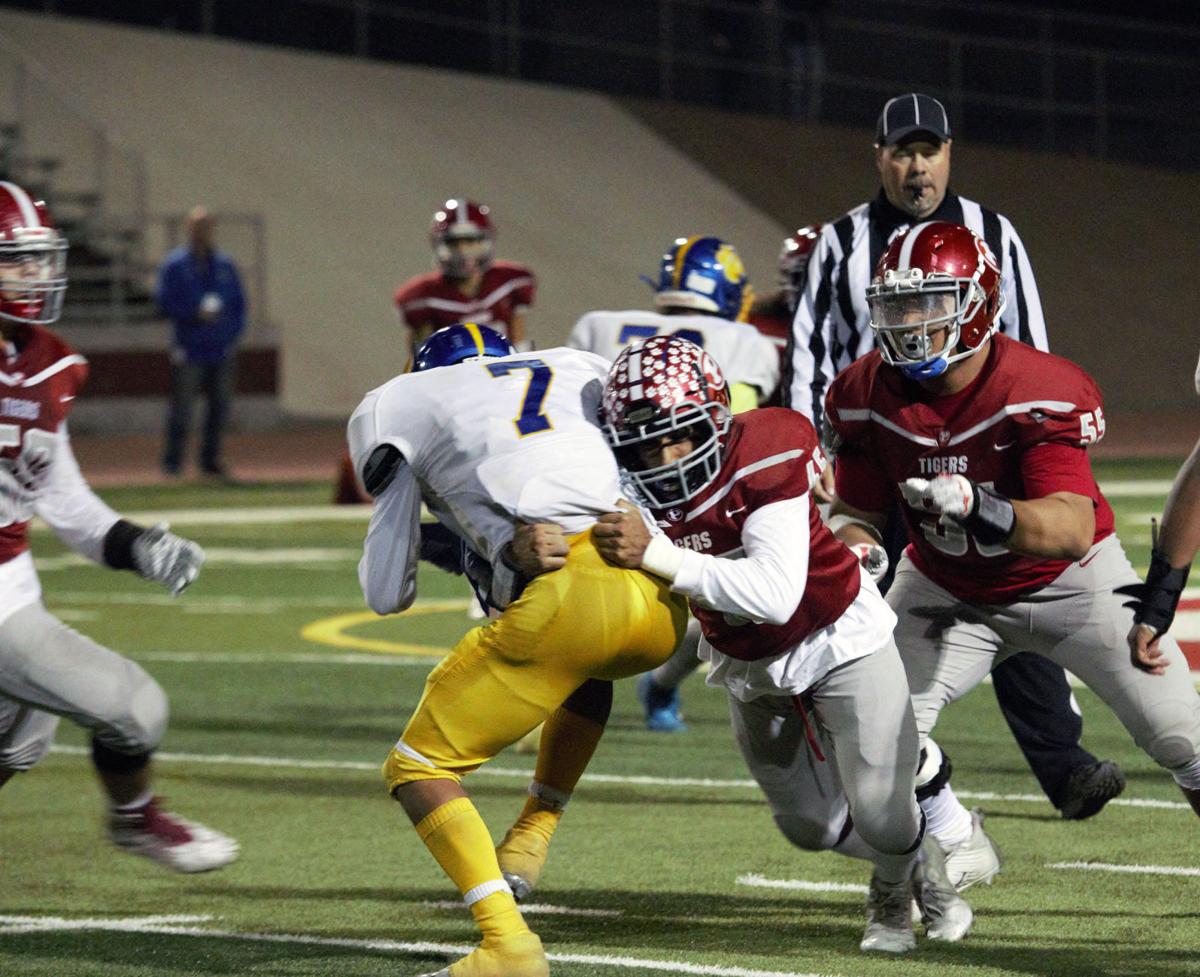 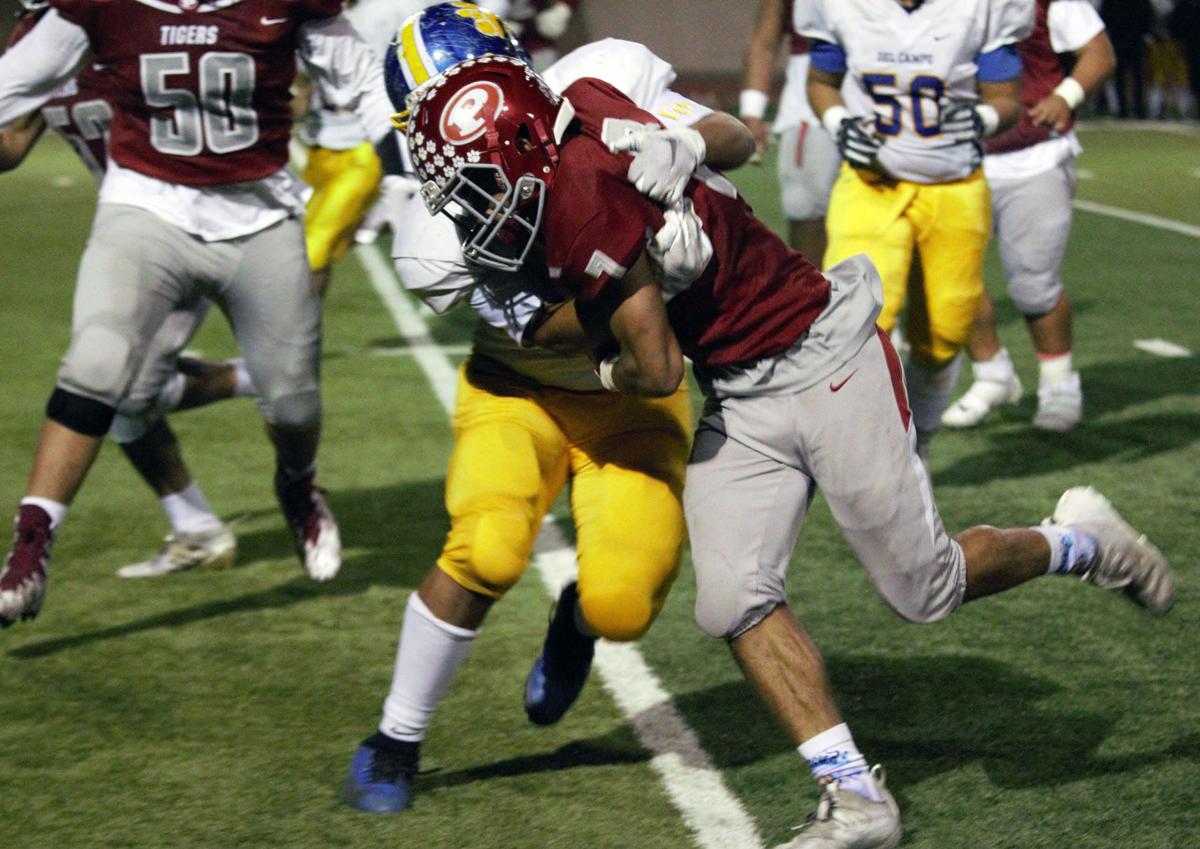 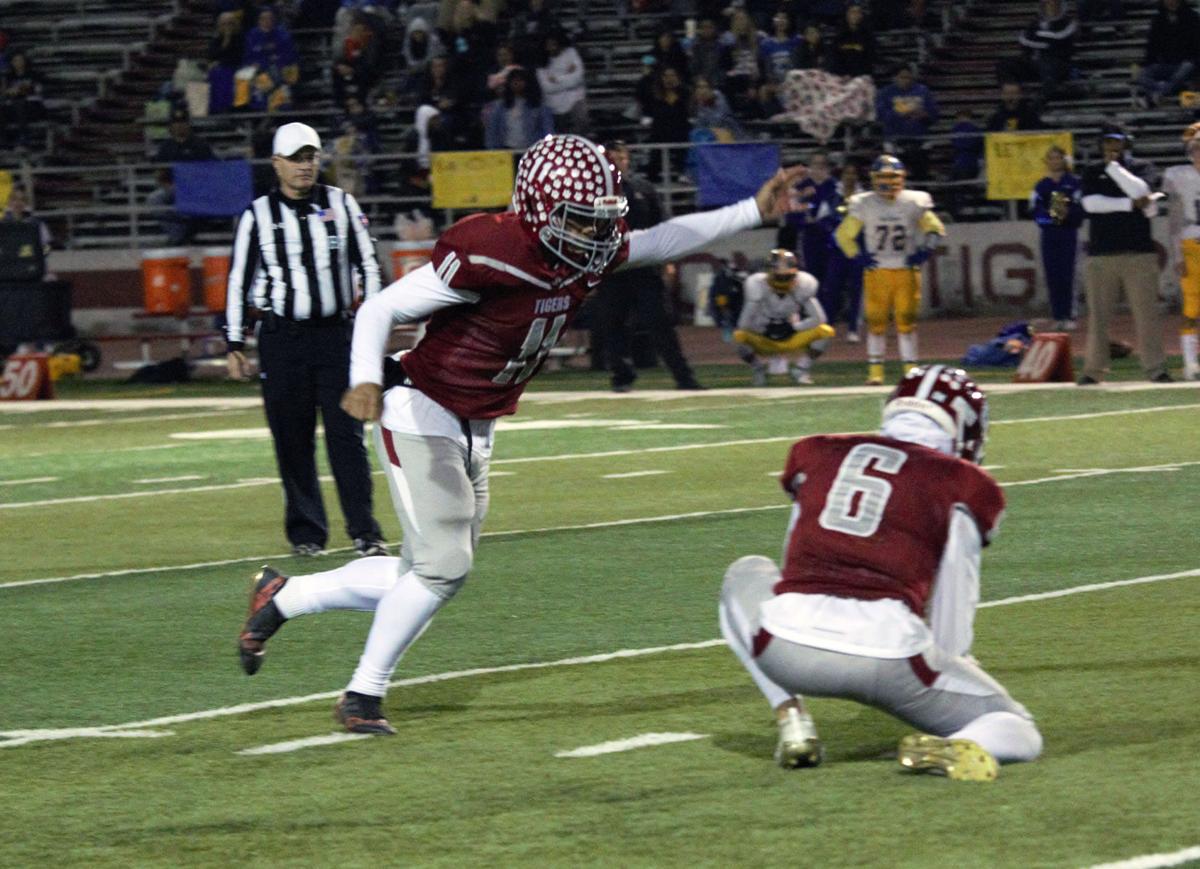 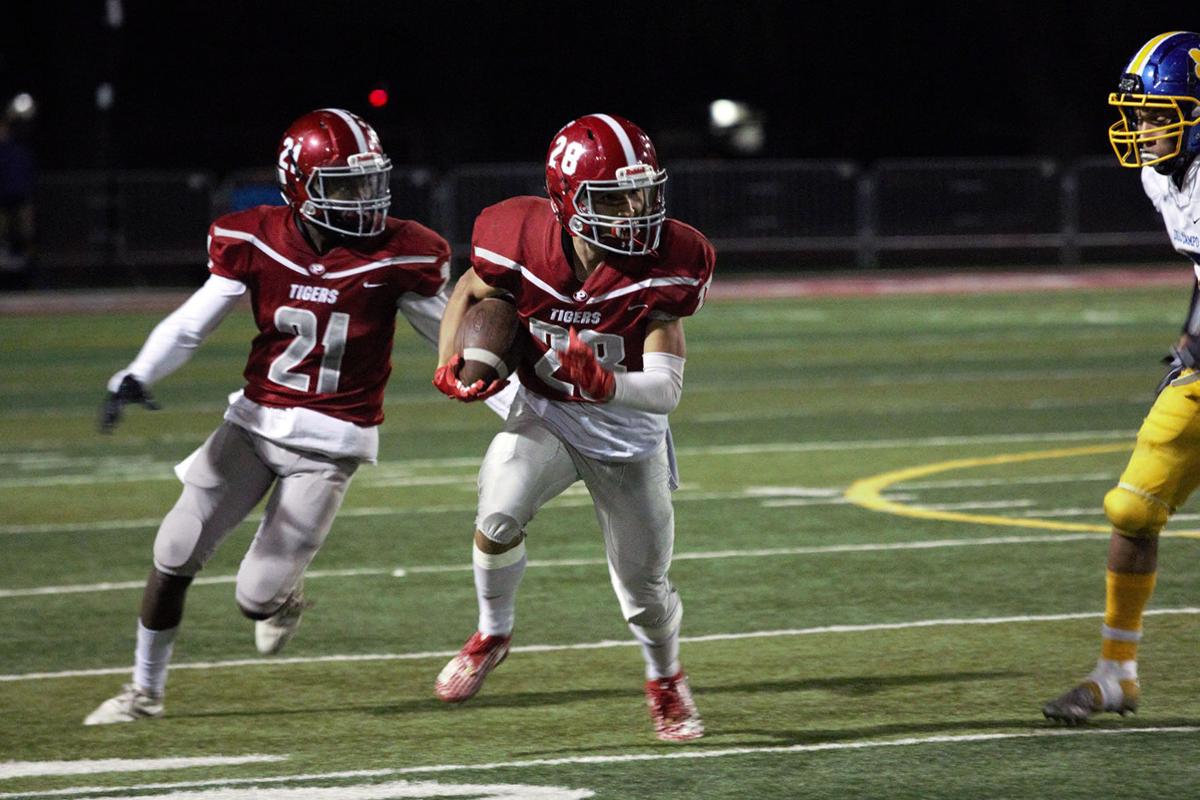 Through 34 minutes of play the Tigers had the game well in hand, holding a 27-7 lead over visiting Del Campo High School in the first round of the CIF Sac-Joaquin Section Division IV playoffs last Friday, but any plans of a date with Oakdale were certainly put on hold during what was a potentially calamitous fourth quarter for Patterson.

Even after the Tigers responded with a 40-yard touchdown run from Obadiah Godbolt to stretch the lead to 34-7 with 11:15 left in the game, the Cougars simply did not give up.

Instead, Del Campo began a gutsy attempt at a comeback that had the Patterson crowd on edge and the fans in attendance from Fair Oaks beginning to believe.

The Cougars scored 21 unanswered points during the course of the next five minutes, that completely changed the complexion of the contest.

What was once a 20-point lead was down to just six with 6:43 left in regulation after a 40-yard touchdown pass from quarterback William Tuter (who replaced starting quarterback Gabe Corpe due to injury) to senior Alex Rocha.

The Tigers’ defense, that had been stingy through three quarters (only 77 yards allowed in the first half), experienced a gut check moment, and although they bent they did not break.

Following an interception for a turnover on Patterson’s ensuing drive, Del Campo was poised to attempt the final push needed to take the lead, but their Achilles heel in Friday’s matchup struck again when Del Campo needed a scoring drive the most.

Their drive was stalled out by fumbling the ball for a concerning ninth time in the game (two of those fumbles resulted in turnovers).

This forced the visitors into a long third down situation that they were unable to convert, forcing a punt with 4:46 left.

Patterson, who had not scored since Godbolt’s 40-yard run to begin the final frame, was searching for any points to increase their lead past eight points and make it a two-possession game.

The Tigers began their fateful drive on the 49-yard line before marching to the 15-yard line, and perhaps more importantly, draining over two minutes in the process.

In stepped junior kicker Adrian Melesio, who was asked to attempt a 32-yard field goal to ice the game.

Melesio kept his poise and delivered the decisive blow. Patterson crucially held a 37-28 lead in the waning moments of regulation. Del Campo’s dreams of a comeback were now a distant possibility once again.

“That field goal was enormous. Really all of them were,” head coach Rob Cozart said. “He’s a huge weapon.”

Melesio was perfect on all three field goals in a game where every point counted, and notched every extra point opportunity on the four touchdowns scored by the Patterson offense.

Del Campo admirably let it all hang out, but an interception by senior Davante Imhoff during their final drive of the game spelt their demise in a gutsy performance by the Cougars.

“Great team win. Last chance at home. It was good for us. They made it a little too exciting at the end. Some of our guys acted out of character. I didn’t like that, and it will be addressed next week, but moving on and looking forward to a real good matchup and a real good place to play high school football at The Corral,” Cozart said.

Patterson leaned heavily on their run game down the stretch. Junior Jordan Imada finished the game with eight carries for 92 yards.

Godbolt was their go-to player, especially in the final moments of the game. Overall, the senior tallied 24 carries for 132 yards and three touchdowns, to lead all running backs.

“He’s the fastest guy on the field, so we figured, ‘let’s toss it to him and let him run it all the way to the corner,’” Cozart said. “He’s never let us down. He’s one of those guys that is explosive, he’s a leader, and he is a guy that you want to have finish the game for you.”

The Patterson defense was impressive through three quarters of play, but the 21-point schism in the fourth quarter put a damper on an otherwise solid performance from the Tigers.

“The first half I was really pleased with the defense. We harped on them all week about what they needed to do and how physical it was going to be and what they need to do to stop the run; they (the Cougars) got big backs with size, and man they stepped up,” Cozart said. “The line up front made it easy for our backers to go make plays; outside backers really did a good job on their responsibilities.”

Quarterfinal showdown at The Corral

Awaiting Patterson in the next round is a familiar regional foe in the always-potent Oakdale High. The Mustangs under head coach Trent Merzon had yet another strong season, with a 7-3 record overall and a 5-1 record in the Valley Oak League. Their 42-39 victory at Central Catholic in the final game of the season resulted in a three-way tie with Manteca and Central Catholic. Oakdale’s three losses came to Liberty (19-14), Palma (28-14) and Manteca (55-37).

Aided by a tremendous season from junior running back Zeke Saffar, the Mustangs’ 2019 season earned them a spot as the number two seed in the CIF Sac-Joaquin Section Division IV bracket.

The two programs are definitely familiar with one another.

The Mustangs have been a regional power for some time now.

Oakdale won Division III titles in 2016, 2014 and 2012. In fact, in the last 15 years the Mustangs have only had one losing season (4-6 record in 2005) and have qualified for the playoffs in every season but 2005. Safe to say Oakdale is no stranger to playoff football or success.

Cozart expressed excitement at the opportunity to play against an Oakdale program that he expressed a lot of praise and respect for, and looks forward to the challenge of taking a shot at the 2018 Division IV semifinalists.

“Coach Merzon runs a great program. They’re a one-high school town just like us. It’s like other ends of the valley, we are on the westside and they’re in the foothills,” Cozart said about drawing Oakdale in the quarterfinals. “That’s a great atmosphere to play a high school football game. It is almost like a college game. We are going to hype this up and get this thing as packed as we can, and make it one for the books. Keep it as hyped as we can, make it exciting and give ourselves a chance. I told our guys before the playoffs started that we are the 6-4 team that nobody wants to play. I firmly believe that and we will use that as our mantra moving on and run with it. I think that’s a way for our guys to make some noise in the playoffs. We missed out on a CCC championship, but let's make some noise, so they’re rallying around it.”