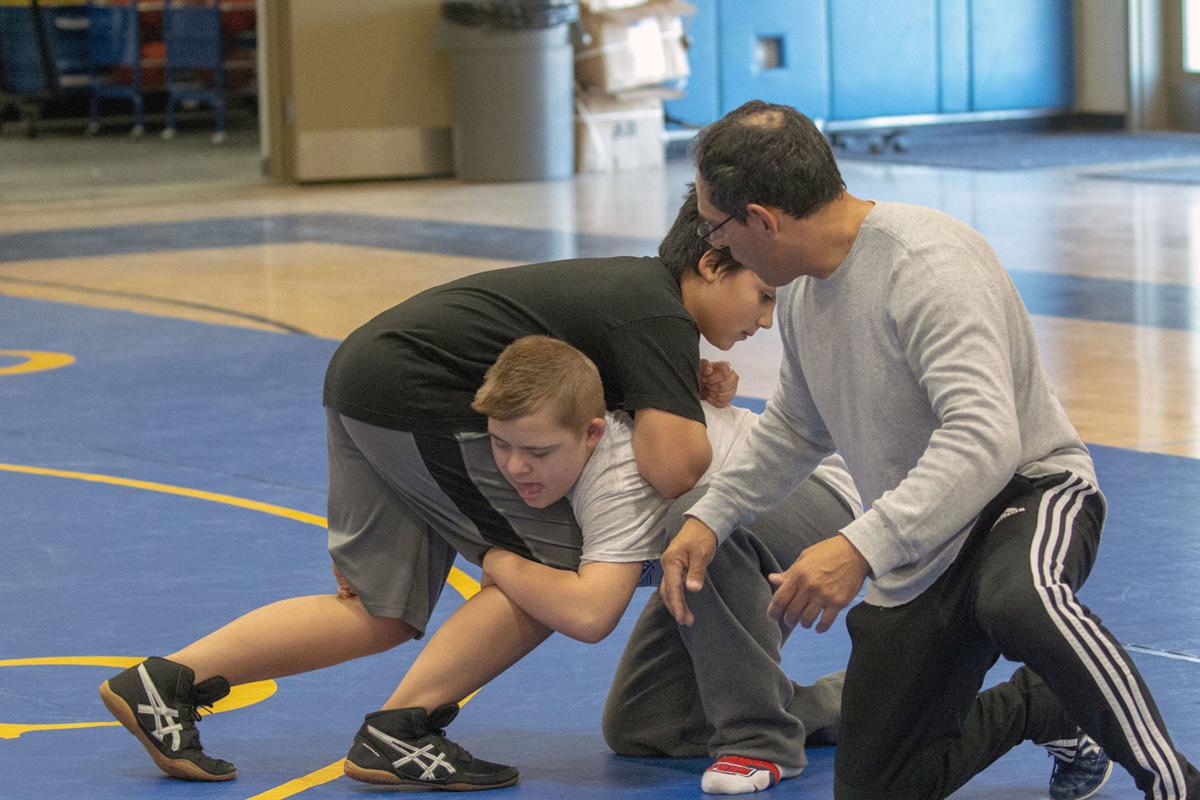 Owen Tyler works on his takedown technique with his partner Aiden Phillips while head coach Hugo Culebro watches on Feb. 19 at the Creekside Middle School gym. 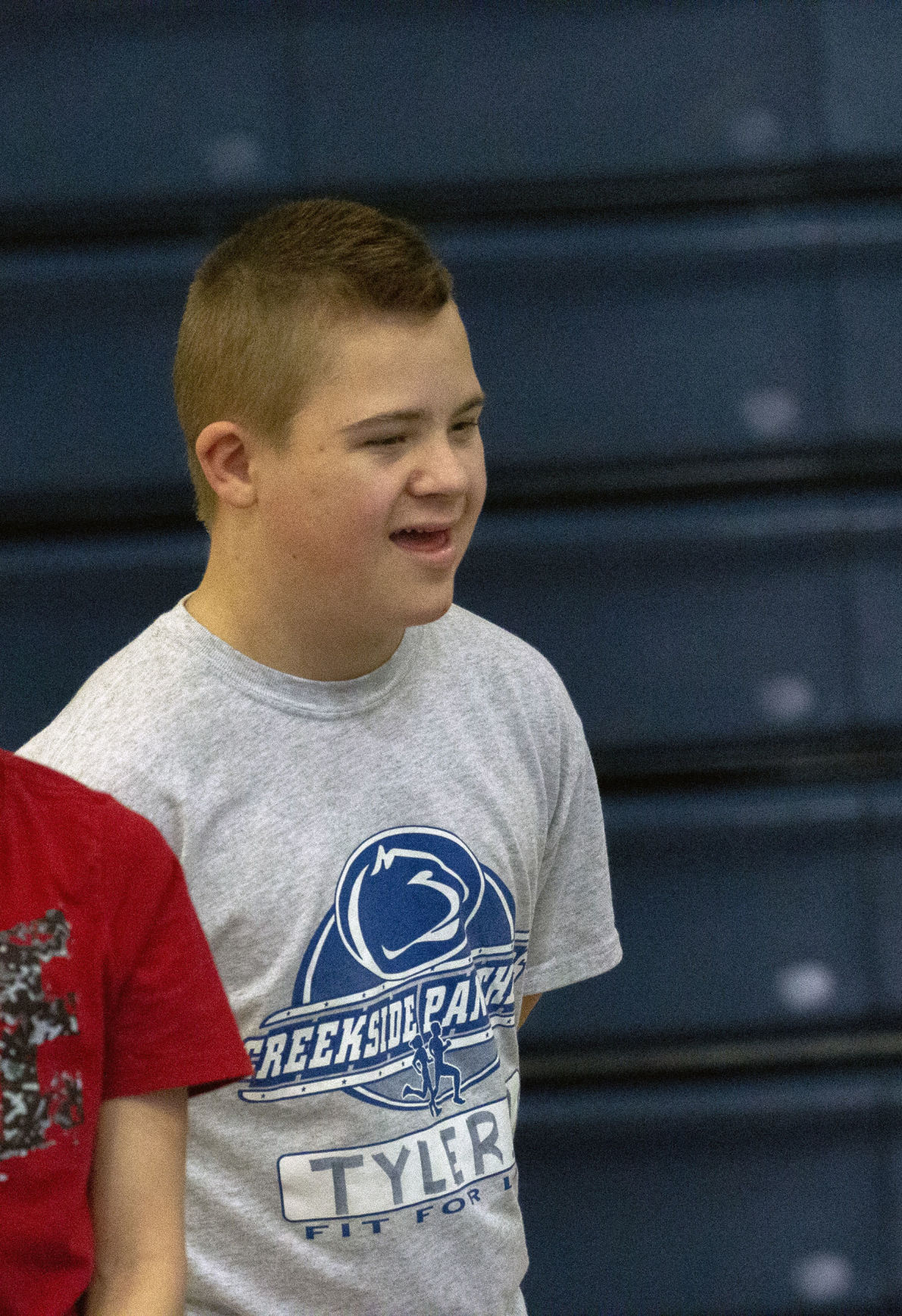 Owen Tyler works on his takedown technique with his partner Aiden Phillips while head coach Hugo Culebro watches on Feb. 19 at the Creekside Middle School gym.

Creekside Middle School seventh grade wrestler Owen Tyler is treated just like anyone else on the Panthers squad. Along with the rest of his teammates, Tyler goes to practice every day to aspire to be a better wrestler. He is pushed by head coach Hugo Culebro, training the same way anyone else would be, but Tyler does so while living with Down syndrome.

“Owen is like any other kid, he comes to practice every day and wants to fulfill* his dream to be a wrestler. Owen is treated just like all the kids; he is part of our team,” Culbero said via email.

As highlighted in this paper in an article from 2010, Tyler has been fully inclusive in his education since kindergarten. Rather than opting for special needs classes, Owen’s parents Jim and Cyndy Tyler wanted to give Owen the opportunity to take typical classes along with his peers. Fast forward to 2019, and Owen is still doing just that.

“He’s socially included with everything throughout the (school) district. If he wants to do something, we let him do it,” Cyndy said.

She explained that wrestling is just an extension of that full inclusion mantra.

Watching his older siblings wrestle, Owen’s desire to be a grappler began at a young age.

“When he was in second or third grade he came and watched them and said, ‘I’m going to wrestle for Creekside,’” Cyndy shared. “He’s just always wanted to wrestle. He’s just into all aspects of wrestling.”

Cyndy credited former Creekside wrestling coach Bobby Pierce and former Panther and current Tigers wrestlers Noah and Chase Mirelez for helping to feed Owen’s interest in the sport. Once Owen reached sixth grade and attended Creekside himself, it was a natural fit to join the squad.

Cyndy praised the Panther coaching staff and culture for Owen’s inclusion and development as a wrestler.

“These coaches are amazing. It’s the coaches, not Owen. He can get out there and roll around all he wants, but he’s learning” Cyndy said. “That’s all anybody wants for their kids, is to better themselves.”

With his sister Mary alongside, Owen participates in all the practices.

Tyler has been wrestling for three years, but earlier this month the seventh grader’s commitment to the sport was highlighted when a video went viral of a match between Oakdale Junior High eighth grader Payne Perkins and Tyler during a wrestling meet held on Feb. 5. This was Owen’s fourth opportunity to compete in a match.

Culebro always tries to find matches for all the kids on his squad, and Owen is no different. Culebro approached the Oakdale Junior High wrestling coaching staff about finding an opponent for Tyler ahead of the scheduled meet.

Tyler wasn’t the only winner in the gym that evening. Everyone was.

“We brought it up to Payne and he was more than willing to do the match. I think for the wrestlers it showed the sport is bigger than ourselves.” Roche said via a phone interview. “For him to do that act of sportsmanship shows there’s more at stake than just winning.”

Once the match began, Tyler went to work. While he looked for opportunities to advance his position, the crowd began to chant Owen’s name, edging him to keep going. Perkins offered resistance at first, but ultimately facilitated and was pinned by Tyler.

“Everyone was excited about it. I don’t think there was a dry eye anywhere,” Roche said.

Owen’s mother Cyndy shared he was just happy to get a chance to wrestle and exhibit the progress he’s made as a wrestler.

“Owen doesn’t care if he wins,” Cyndy said. “To Owen it was just another match. He was happy to show what he’s been learning.”