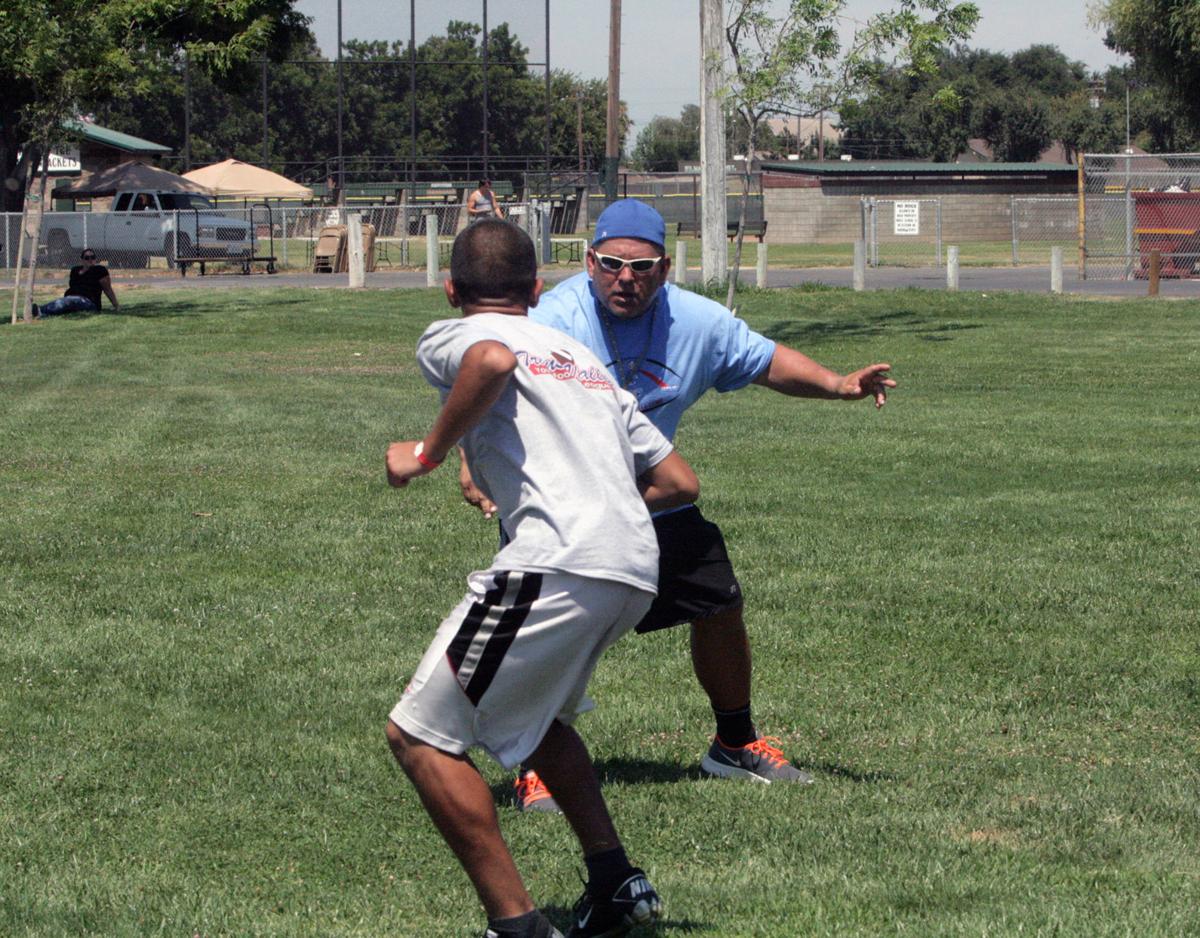 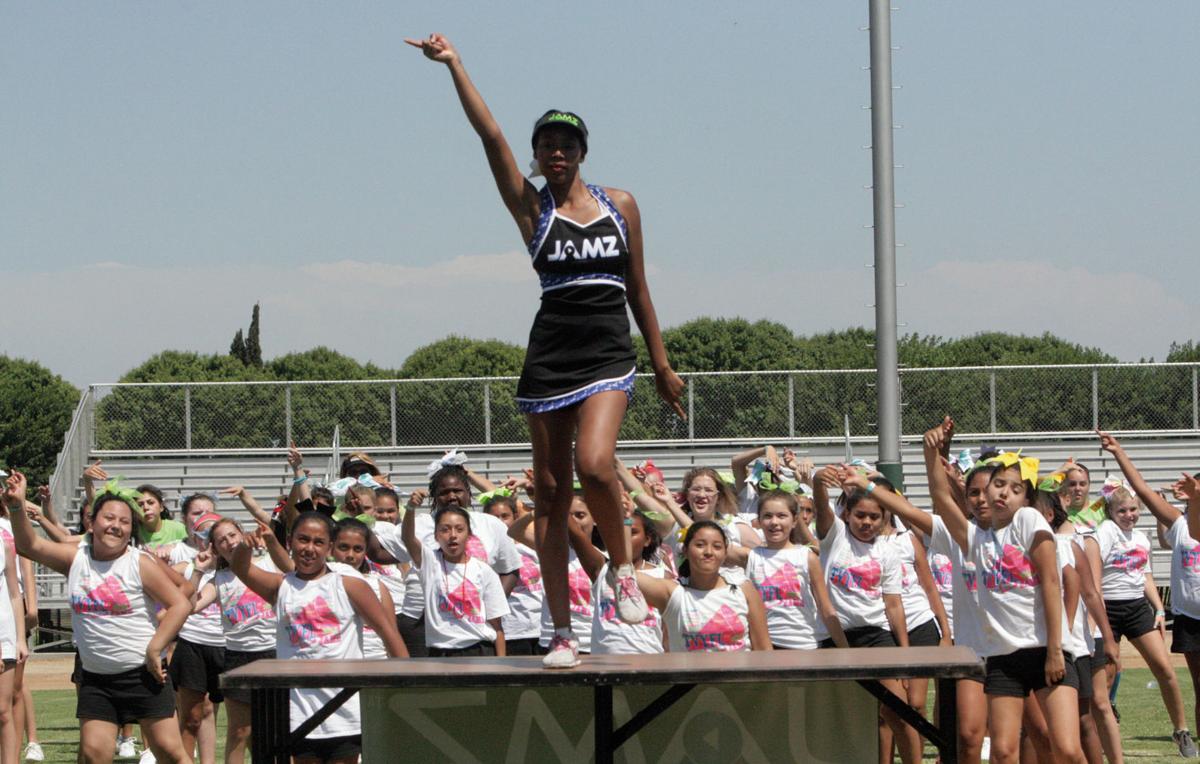 Third year JAMZ instructor Chelsea Toler leads the group of cheerleaders behind her as they practice their dance routine on Aug. 1. 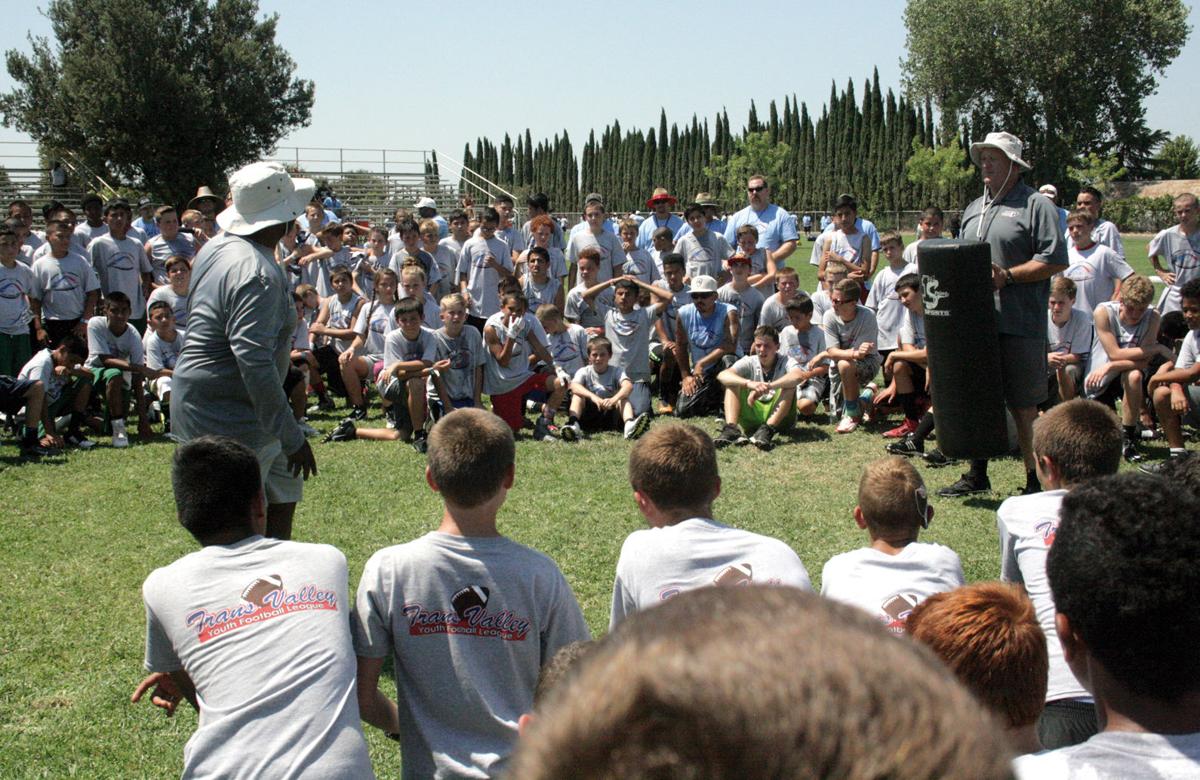 Terry Summerfield on the right and Chris Nesbit on the left go over the fundamentals of the next drill the afternoon of Aug. 1 at Hilmar High School.

Third year JAMZ instructor Chelsea Toler leads the group of cheerleaders behind her as they practice their dance routine on Aug. 1.

Terry Summerfield on the right and Chris Nesbit on the left go over the fundamentals of the next drill the afternoon of Aug. 1 at Hilmar High School.

HILMAR — School is still out for the summer, but the normal, desolate look of Hilmar High School during the break was transformed over the weekend.

Over 1,000 youth football players and cheerleaders and over 200 coaches populated the grounds of the school to participate in USA Football’s Heads Up Camp and the cheerleading-focused JAMZ Camp in preparation for the upcoming Trans Valley Youth Football League (TVYFL) season.

Concussions and their long-term effects on players have been a cause for concern in the sport of football. Many solutions for addressing the issue and staving off a potential decline in participation have been floated around, as parents’ worries about their children being seriously injured may prevent more and more kids from playing football.

USA Football’s Heads Up program is an attempt at alleviating the issue of concussions in the sport by changing fundamental tackling techniques at the youth football level.

Any kid enrolled in the TVYFL was welcome to participate at the camp over the weekend, which had instructors from USA Football teaching techniques that aim to keep players’ heads safe.

Chris Nesbit of Luther Burbank High School in Sacramento was one such instructor. Nesbit has been coaching the sport for 15 years at the high school level, and felt that this program’s objective was important.

“I just love football. It’s a good opportunity to interact and meet other people,” Nesbit said. “Trying to enforce this heads-up football for concussion prevention is good for the kids.”

USA Football Master Trainer Terry Summerfield has been coaching 29 years, and he has been involved as a regional trainer for three years, teaching at camps in Oregon, Washington, California, Alaska and Hawaii.

Summerfield, the varsity head coach at Barlow High School in Oregon, also visited Japan in February of this year to help train football players in Heads Up clinics in cities such as Tokyo, Osaka and Kyoto. 2015 marked the 80th anniversary for organized football in Japan.

Summerfield explained that the reason he joined the program was his disenchantment with the direction the sport was headed. “I did not like watching ESPN’s greatest hits,” Summerfield said. “I was concerned about that, and when I heard about the Heads Up program, it just made sense.”

Starting a grass roots campaign to reeducate coaches and players on the fundamentals of football and health safety is the best avenue to increase player safety, Summerfield believes.

“The game of football has so much more to teach than X’s and O’s,” Summerfield said.

Along with stressing head safety and protection, the Heads Up football program trains coaches on how to recognize concussion symptoms as well as how to prepare for the heat and enforce proper hydration.

The program also emphasizes establishing a plan of action for emergency events, such as a sudden cardiac arrest.

As football players practiced techniques in adjacent fields, cheerleaders took over Hilmar High’s stadium to learn new techniques of their own for the 2015 season.

Typically the JAMZ Camp is held as a standalone event, but this is the first year that the TVYFL decided to run it alongside Heads Up.

JAMZ is a Modesto-based organization that teaches dance routines and cheer techniques to young cheerleaders.

The group also sends cheerleaders to national and regional championships—the first of the 2015-16 season being the Kingdom Classic in Vallejo, Calif., starting on Oct. 11.

Instructor Russ Alcorn, who has been with the JAMZ organization for 11 years, led the afternoon session on Aug. 1. The Modesto native wanted to share his expertise in cheerleading. “I am here to educate the cheerleading athletes on the 2015-16 cheer and dance curriculum,” he said.

Alcorn, along with JAMZ instructor Chelsea Toler, spent the afternoon teaching cheerleaders a dance routine, with Alcorn demonstrating each technique slowly. Participants rehearsed each section of the routine before moving on to the next.

At the end of the day, the cheerleaders exhibited what they had learned with a demonstration for their parents.

The TVYFL will start their season Aug. 15. The Patterson Ravens Youth Football and Cheer program will begin opening week at home when they host the Gustine Redskins at Patterson Community Stadium.