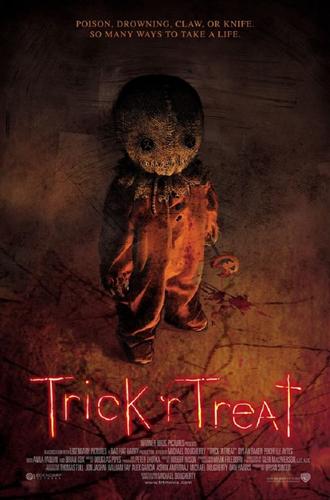 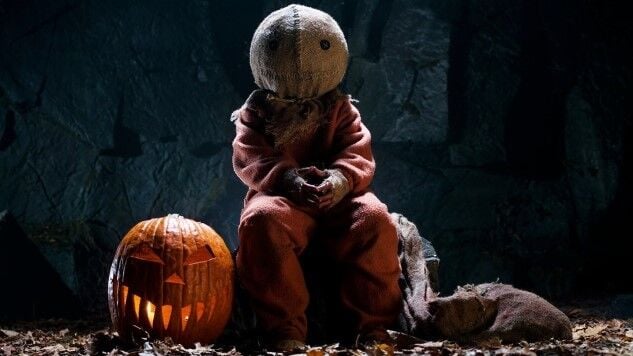 We got ourselves a spicy one today folks!

Trick ‘r Treat, released in 2007 and written and directed by Michael Dougherty, was largely ignored upon its initial release, being doomed to the film festival rotations and never getting a real theatrical release. It has since gone on to attain cult status with some even declaring it the greatest Halloween film of all time. So let’s talk about it.

The premise is deceptively simple. Several neighbors of a fictional Ohio suburb each have their own horrifying experience on Halloween night. Each of the five stories overlap so seeing characters from the different stories interact with one another, or be seen in the background of another story, is often fun with us, the viewer, trying to piece out the correct timeline of events. The recurring theme that binds all the stories together is the appearance of a trick or treater named Sam.

If things went differently and the film got a wide release Sam would no doubt go down into the hall of fame for costumes each year.

The film itself is easily digestible and easy to understand with some people claiming it is the perfect gateway film into the horror genre for those not already a fan. There is a little something for everyone from creature-feature to slasher, and of course the super natural.

I would go so far as to make the claim that Trick ‘r Treat can go up against any horror anthology, like Tales from the Crypt or the Twilight Zone, and hold its own. It does this with a heavy use of symbology and iconography by establishing a set of rules for Halloween; having a lit jack-o’-lantern will keep you safe. Once you know that you can spot in the film who is safe and who isn’t.

So let’s dive into what makes the film good.

To start off, the film is wonderful at taking your expectations and subverting them. Even the opening scene sees what could be a cliché killer in a mask and instead flips it to a guy waiting for a ride. In the same train of thought, the first story has an unlikely killer with an even more unlikely twist ending.

In fact most stories here have some sort of twist that is revealed in the end, and if it is your first time watching, they can be quite the shocker; later it turns into a fun game of trying to spot the clues to the switch in future viewings.

Each story lasts around twenty minutes and moves fast enough to prevent you from getting bored. They’re filled with plenty of shock value and some with plenty of gore for those seeking that.

The neat part about the film is if one story doesn’t keep your attention it’s easy enough to skip to the next one and not lose the film at all as each segment is its own individual story, connected to one another by Sam.

Let’s take a moment to discuss Sam as he is the thread linking everything together, and if the film does not get him down then it all falls apart.

Thankfully Sam is both an adorable and horrifying being. Some sort of Halloween Deity there to punish those who break tradition by destroying pumpkins or blowing out their candles. It’s a clever set-up used to explain why the characters are targeted by Sam, even if some of these people obviously deserve their fates.

The film plays with our morality by making us feel sorry for some characters before they meet their doom but then throws a curveball that changes the context of each story. In the end, the choice of whether or not we feel for them is left to the viewer. It’s a difficult trick to pull for movies and I think this one does it well. Never overly cynical or mean about what it’s doing, instead trying to play off irony and make the events of the night have a macabre sense of whimsy and fun.

The film is the antithesis to Christmas, wherein a typical Christmas film people are forgiven and second chances are handed out in the end. Trick ‘r Treat, on the other hand, is about punishing those that deserve it reminding us that Halloween is a season devoted to fear.

It’s a fun film with all sorts of throw backs to other stories and horror tropes with a payoff to every detail it gives you. It’s a highly efficient film with nothing being wasted and if there is one take away to get from the film it would be, don’t be a jerk and light your jack-o’-lanterns.

Oh and the film is rated R for a reason so best put the kids to sleep before checking this one out. Trick ‘r Treat can be found streaming on HBOMax and rented on Amazon and Youtube. Have fun and stay safe.