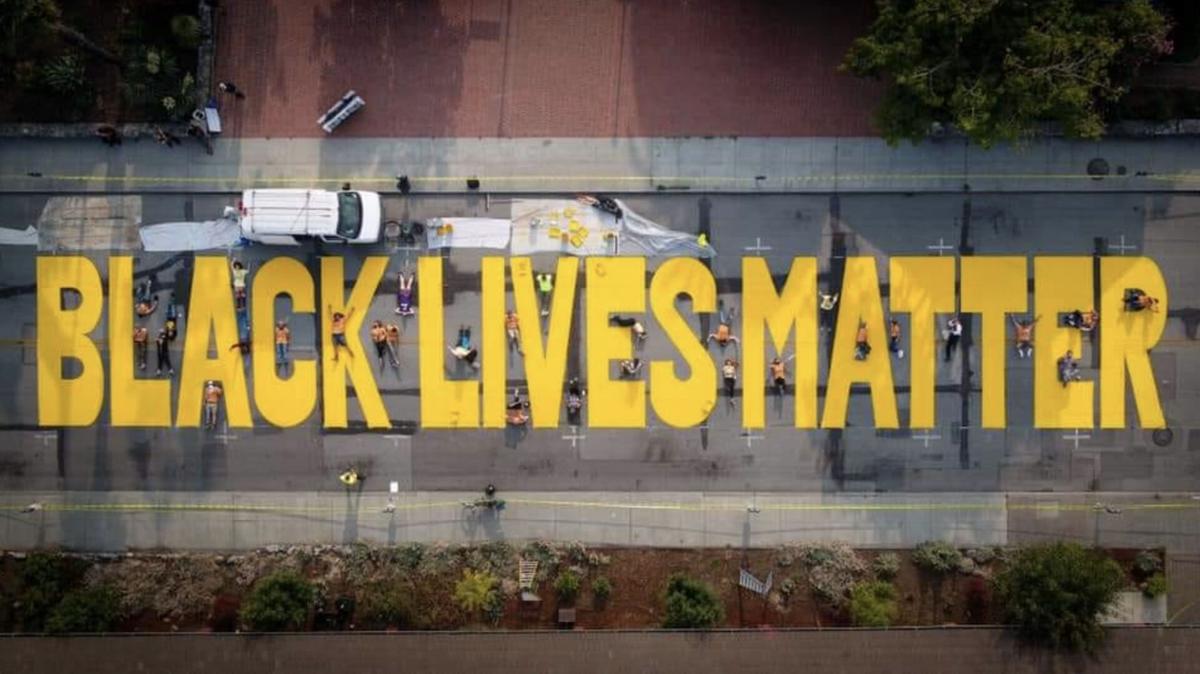 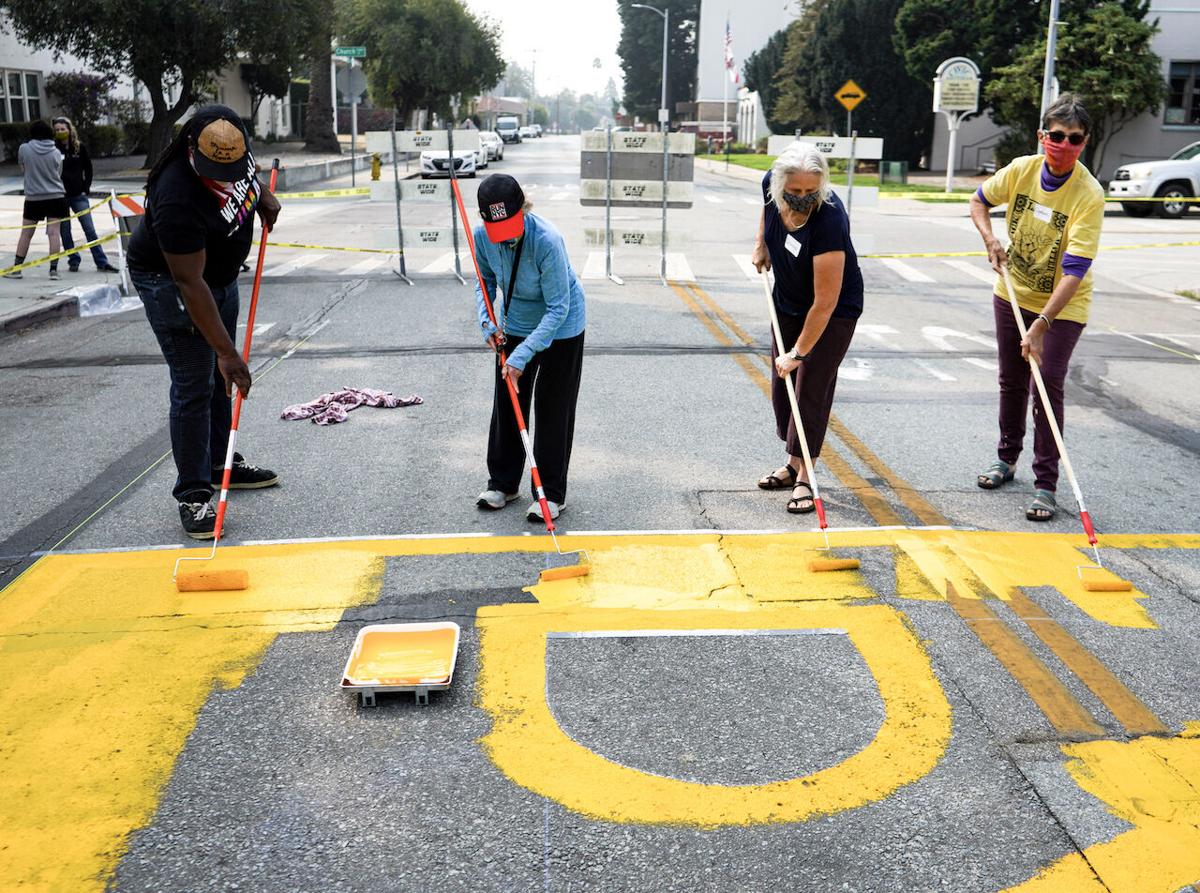 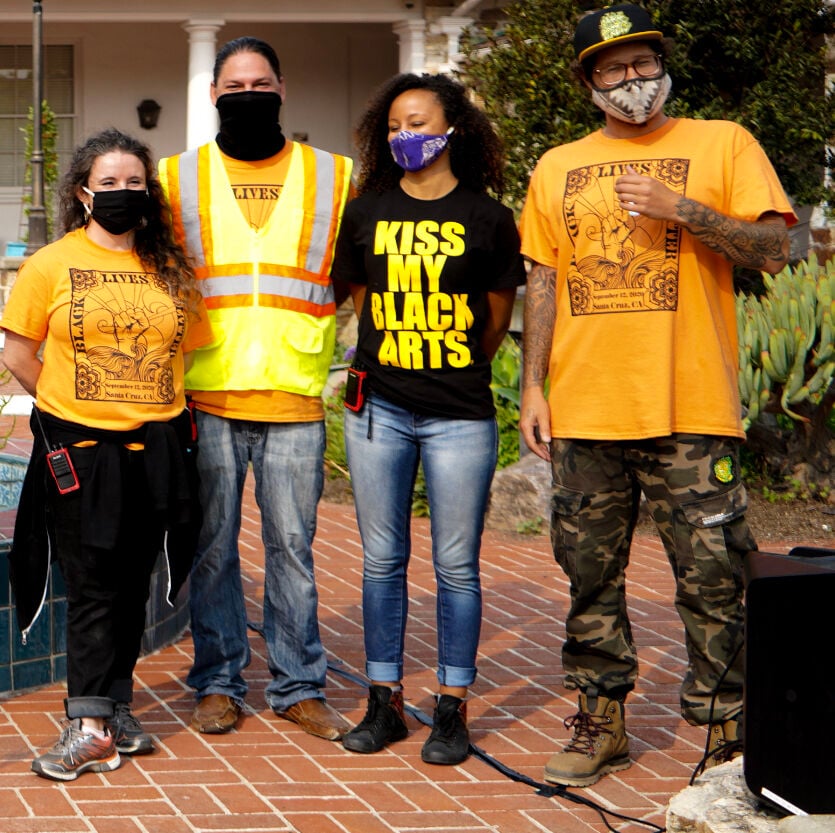 Santa Cruz became the second city in the nation to add a city sanctioned Black Lives Matter mural in front of City Hall on September 12th. The effort began in early June, when local artist was Abi Mustapha connected with City Arts Commission Vice Chair Sean McGowen.  After many months of paperwork, planning, presenting, and fundraising, more than 500 community members helped paint the mural throughout the day.

In order to paint the mural, Mustapha and McGowen spent several months getting the City onboard.  Mustapha explained her motivations for city approval, “If the City approves it, we can ask them for more than a mural. We can get support on more racial equity issues and the mural will be more than a performative act.”  Receiving permission proved much more difficult than either expected.  McGowen quickly ran through their application experience, “We requested many permits for various ways, but they were all shot down by the Public Works Department.  They wouldn’t allow us to paint the street.  We decided it was time to let the community know and sent out a letter of intent.  By 3 p.m. that same day, we were getting dozens of calls and the community helped push us onto the City Council agenda.”  After two months of City Council meetings, the council unanimously approved their mural, and the organizers finally received the clearance they needed.

Although they spent months of planning, both Mustapha and McGowen were overwhelmed by the community response.  Mustapha was so proud of the volunteers, “Some murals go up and nothing happens, or some go up in protest, but this one is different because the community is behind it.  Instead of a critical protest, we’re recognizing the good things and advocating for more.  This mural was made by the community, and now they have to take care of it.”  Mustapha sounded almost disappointed by the lack of painting opportunity, “With more than 500 volunteers and social distancing, you could only really paint three rolls, and then it was someone else’s turn.”

Aside from individual involvement, many organizations collaborated to put on the event.  Local artist, Taylor Reinhold advocated and planned alongside Mustapha.   Shandara Gill, Founder and Executive Director of Yoga for All Movement, managed all monetary contributions.  The Museum of Art and History Exhibitions & Projects Manager, Whitney Ford-Terry, “was a colossal help to organize our volunteers,” according to McGowen.  MAH staff divided the volunteers into socially distanced groups and Lunacy Productions donated hand sanitizer for the event, which helped the event follow safe COVID practices.

The Santa Cruz BLM mural differs from many, as Mustapha points out their plan for sustainability.  The organizers have already raised enough money to cover maintenance costs throughout this year and the next, and Mustapha is excited for a larger scale event after the pandemic ends.  “I don’t want this to be performative, I want it to be sustainable.  So in following years we’ll make a whole event, with food trucks, vendors, and educational speakers.  That’s the ideal.”  According to Mustapha’s plans, each year community members will gather to celebrate Juneteenth and repaint the mural.

While Mustapha has heard of a few residents objecting to the mural, she points out the ill-informed nature of their dissent.  “A lot of people in Santa Cruz who aren’t for this movement don’t understand that this was voted on by elected officials and the City Arts Commission.  It was supported unanimously, by those we have chosen to make decisions on our behalf.  No tax payer money went into the mural, it’s all been privately funded by donations and created by volunteers who have donated their time.  This is a community supported project.  Those who look this movement and see it negatively, see what they want to see.  They’re not looking deep enough.  Black Lives Matter is based on equality and rational thinking.  Every movement has a dark side, but that’s not a part of the official movement.”

If you missed out on painting the mural this September, don’t worry!  Mark your calendar now for next year’s event, June 19th.  You can also check out www.yogaforallmovement.org/ to donate or learn more.  Finally, both McGowen and Mustapha have advice for anyone looking to create a more racially equitable future.  Mustapha explains, “This movement starts with education. People think, ‘we can hire black people, or do this or that,’ but it’s more about understanding the racial bias.  If you grew up in the U.S., there’s no way to escape this system.  It evolved out of slavery and continues to keep things unequal, understanding that we have these biases, our history, and that they still exist is the first step.  We all need to unlearn and relearn a lot.”  McGowen “urge[s] people to be more active in city government, that’s how well create a more equitable future.”  Their advice is a great step to take, to make our community more equitable, welcoming, and compassionate for all.