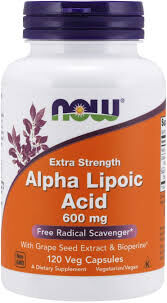 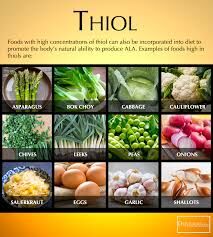 Alpha lipoic acid (ALA), also known as lipoic acid is a vitamin-like antioxidant referred to as the "universal antioxidant" because it has the unique attribute of being both fat and water-soluble.

Alpha lipoic acid can be found in very small amounts in some  foods. The richest foods are organ meats (kidney, heart, liver), potatoes, spinach, and broccoli. One of the first groups of researchers to isolate alpha-lipoic acid required nearly 10 tons of liver residue to produce a mere 30mg. So, ALA is a strong candidate for dietary supplementation.

A unique aspect of ALA is its ability to regenerate other antioxidants back to active states. This includes vitamin C, vitamin E, and coenzyme Q10. Alpha-lipoic acid also influences the production of glutathione, which supports a healthy person’s liver detoxification.

"Alpha-lipoic acid could have far-reaching consequences in the search for prevention and therapy of chronic degenerative diseases such as diabetes and cardiovascular disease," says Lester Packer, one of the leading researchers in the area of antioxidants. Antioxidants attack "free radicals," waste products created when the body turns food into energy. Free radicals cause harmful chemical reactions that can damage cells, making it harder for the body to fight off infections. They also damage organs and tissues.

In the body, alpha lipoic acid is involved in many processes. It is involved in the absorption of sugar and supports its metabolism. This means that ALA helps the body turn glucose into energy for the body to use. In addition, ALA supports healthy nerve function. The conclusion of the researchers is that alpha-lipoic acid seems to be efficient and safe in the treatment of diabetic peripheral neuropathy with a daily dose of 600 mg for 3 months.("Rom J Intern Med"   Jul-Sep 1999)

Up to 50% of diabetic patients develop peripheral neuropathy, a type of nerve damage that may result in pain, loss of sensation, and weakness, particularly in the lower extremities. Peripheral neuropathy is also a leading cause of lower limb amputation in diabetic patients. The results of several large randomized controlled trials indicated that maintaining blood glucose at near normal concentrations was the most important step in limiting the risk of diabetic neuropathy and lower extremity amputation.

The potential of ALA for metabolic syndrome has also been explored. It was shown that ALA can help weight loss, ameliorate insulin resistance, as well as to lower blood pressure. Animal studies show that alpha-lipoic acid prolonged lifespan in certain species.

In various studies, some people who took ALA lost an average of 1.5 pounds more than those taking a placebo over 14 weeks. In the June, 2020 issue of the "Int J Clin Prac" a meta-analysis found that Alpha Lipoic Acid "significantly reduces the risk of obesity" including reduction in weight and body mass index (BMI).

ALA at 600mg/day for 2 months showed "significant pain reduction" in the treatment of mild to moderate carpal tunnel syndrome. ("Malays Orthop J"   2020 Mar.)

ALA assists to prevent muscle damage caused by free radicals and speeds up muscle recovery. The multiple health benefits of ALA have made it a popular supplement among endurance and resistance athletes.

Results of a 2018 meta-analysis study showed that alpha-lipoic acid supplementation could significantly decrease CRP(C-reactive protein) level in patients with elevated levels of this inflammatory marker. ("Nutrition, Metabolism and Cardiovascular Diseases").

CRP is an inflammation marker that may indicate chronic inflammation linked to harmful diseases such as diabetes and cancer.