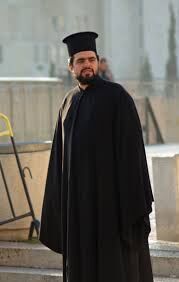 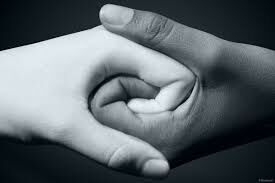 Every week, on Sunday morning, I kiss a black man’s hand in front of several hundred people. And I’ve been doing that for twenty years. It happens in the middle of our Sunday service at a moment called the ‘Kiss of Peace’. We do this because, in Eastern Orthodoxy, it’s considered a deep hypocrisy to worship together while claiming to be ‘perfectly united, with no divisions’ (1 Cor. 1:10) while being upset with someone or holding a grudge.

So in the middle of the service, the clergy turn to each other, take the other’s hand, embrace, and kiss the hand. And my fellow priest, Father Nathaniel Johnson, my co-struggler and dear friend, is one of the few long-time African American residents of the San Lorenzo Valley.

Father Nathaniel is quite a man in his physique, wisdom, experience, and talents. He’s a professional bass player, and over the last 60 years played with the top jazz, blues, and creole musicians and bands. He was in Steve McQueen’s movie ‘Bullet’. He once spent an evening with Martin Luther King Jr. He moved to the valley in 1976 and soon became the first black volunteer and eventual EMT on the Felton Fire Department.

He’s old enough to be my father, and he was one of my father’s dear friends. Now he is my friend. And he has giant, beautiful, black hands. When we exchange the Kiss of Peace, it is a moment of brotherly love, camaraderie, and the kind of loyalty only gained on the battlefield. We are in the good fight. And we are in it together.

As an African American in Santa Cruz County, Father Nathaniel represents the less than 1% of our black population; and in the San Lorenzo Valley it’s even less. He’s encountered overt racism over the years, and had his share of subtle racism too: awkward glances, weird ‘vibes’, forced smiles, cold eyes.

Design call out for this

When ordained in Jerusalem, I made a commitment to always wear my black priest’s robe. And he told me, “Now when people stare at you, you’ll know a little bit of how it feels to be black.” Almost everything I know about being an African American comes from him. We are real friends, and we have real talks.

And guess what? We have police in our church too: Sheriff deputies, CHP, corrections officers, and DOJ. And guess what else? We all love each other and get along most of the time. We have both the ‘thin blue line’ and ‘black lives [that] matter’. How? Well, for one, we take Father Nathaniel’s favorite piece of advice: “Most of the time, the best thing to do is shut your mouth.”

We don’t have any special African American days or Law Enforcement days. We care for the well being of all our neighbors, no matter the color of skin or the color of uniform. And we refuse to prioritize political movements and personal opinions over our devotion to ‘love your neighbor as your self’ (Mk. 12:31) and even to ‘love your enemies’ (Mt. 5:44).

So when BLM picked up momentum, I asked Father Nathaniel what I was supposed to think about it. I want to know from someone who knows the truth about being black. I don’t want to be ‘educated’ by social media or political movements. I want to go to the source. I want an African American to share their wisdom with me. I want the reality, not the spin.

“Well,” he began, “is there racism? Yes. Are there bad cops? Yes. But is focusing on the negative going to help anyone? Nope. And if anything is actually going to get better, there are two things we have to keep at the front of our minds, at the forefront of our awareness.”

“First, there is no white person in America who is responsible for the choice his ancestors made to own slaves. That’s the past. And we don’t judge a man by what is long gone. We judge a man by the decisions he makes in his own life, and his willingness or unwillingness to accept responsibility for those choices.”

“Second,” he continued, “we have to shut our mouths and stop talking about the color as if it has any significance other than being an aspect of the beauty and variety of God’s creation. Picture a flower garden with black, white, blue, yellow, red, and pink flowers in it…all the colors.”

“Tall flowers, short flowers,” he smiles and points to the two of us because he’s tall and I’m short. “Are we really going to argue about what color is best or worse, and maybe start pulling out some colors? It’s the very nature of the variety that makes the garden beautiful! And the fact is, when you start pulling out the flowers, you’re going to end up with a lot more weeds.”

Creationist or an evolutionist, none can deny that the natural world around us is one of profound variety, not homogeny. A variety of color, history, opinions, experiences, freely made choices, and varying paths; a precious variety that we must protect at all cost. For it is in the protection of all that we find protection for ourselves.

And it dawned on me what really happens when we focus on the color of skin or the color of a uniform; like black and blue. We all end up ‘black and blue’. We all end up bruised and wounded. We all become externally focused and self-conscious to a deeply unhealthy degree, nurturing a systemic hate towards those we condemn and by whom we feel condemned.

So when we see our African American neighbor walking down the street, greet them and assure them that they are loved and supported. And when we see our police officer neighbor, let’s give a friendly wave. If by chance we can talk to law enforcement personnel, let’s tell them that they are loved and supported too. Because if we can’t love both the black and blue lives, our own lives will just end up more black and blue.

Father Thaddaeus Hardenbrook (MA, MTh) has lived in the San Lorenzo Valley since 1973, attended SLV high school, Cabrillo College, UCSC, and San Jose State before turning his studies from literature to pastoral theology. Having grown up in Boulder Creek, he now resides in Ben Lomond with his wife and four children, and is the senior priest at Saint Lawrence Orthodox Christian Church in Felton.