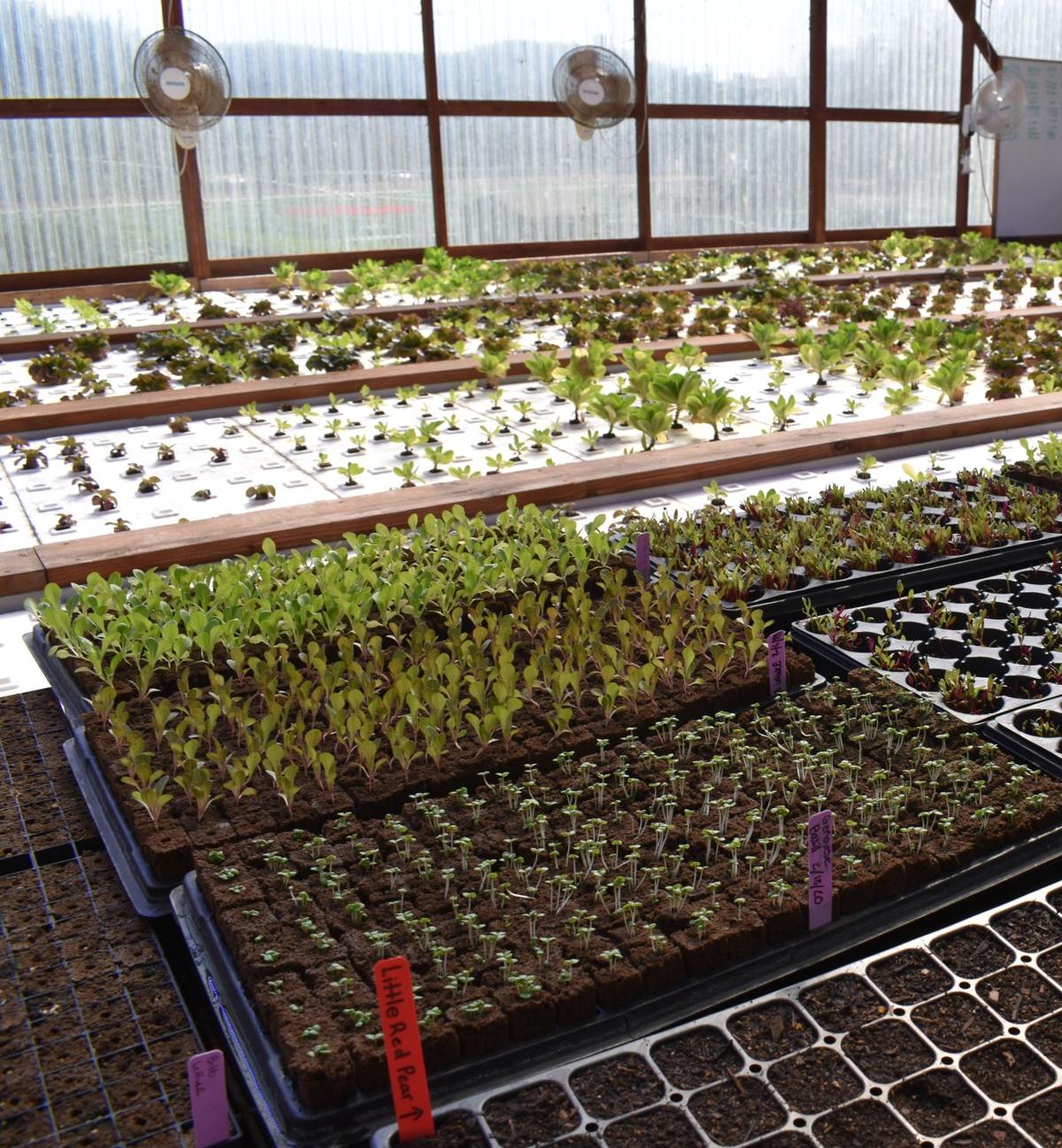 Inside the green house, many plants are thriving with the tender care of SLVHS students. 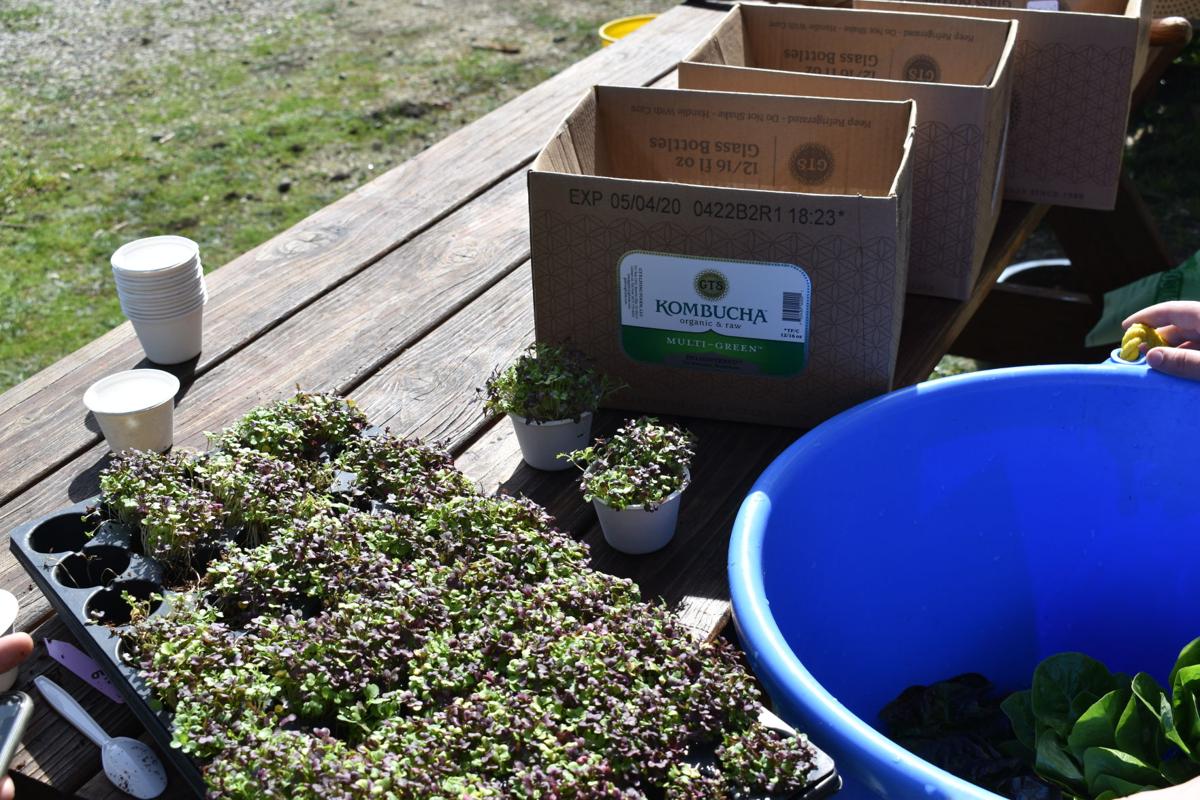 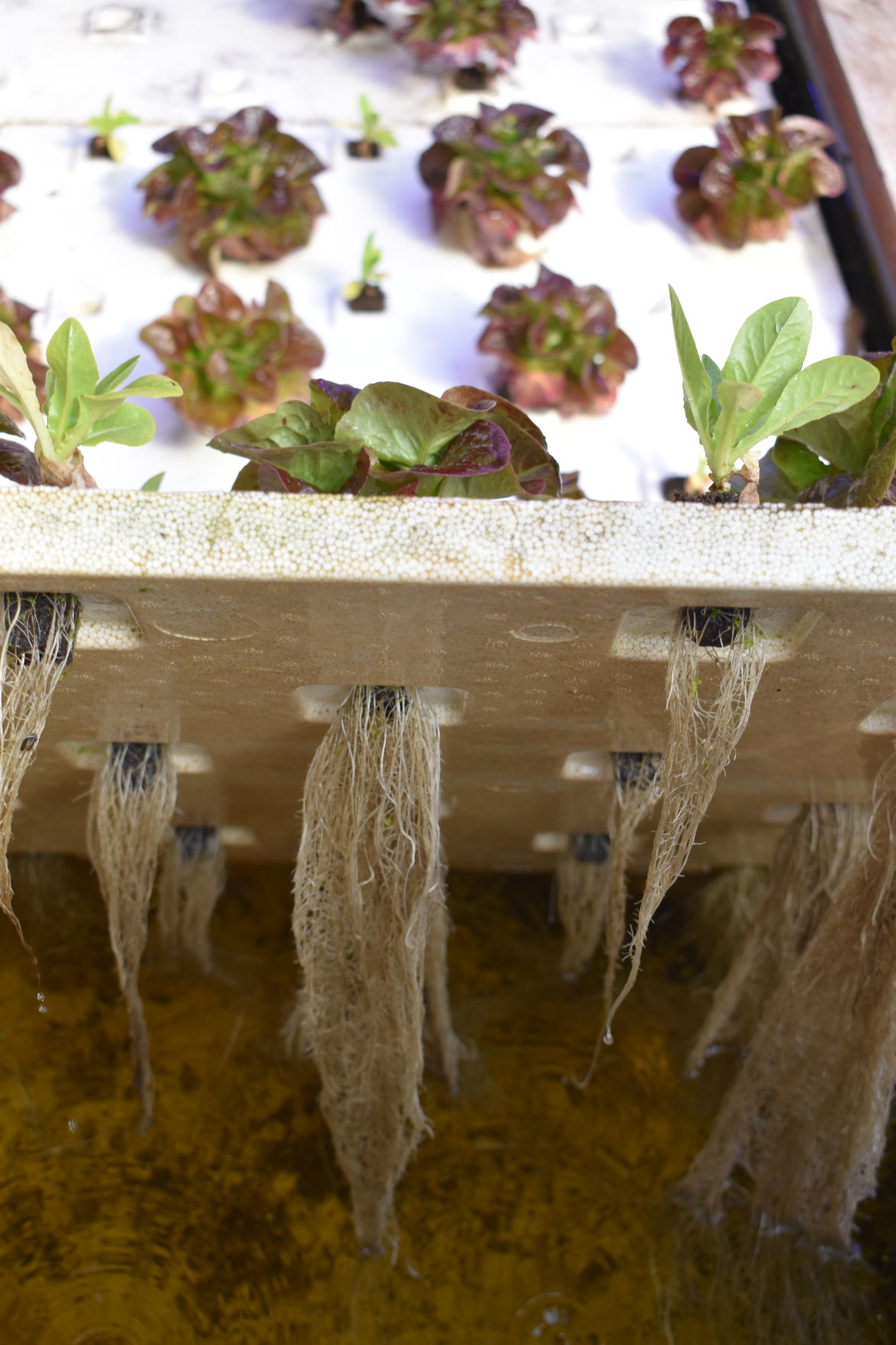 An aquaponic cabbage raft picked out of the water, with roots exposed and water below.

Inside the green house, many plants are thriving with the tender care of SLVHS students.

An aquaponic cabbage raft picked out of the water, with roots exposed and water below.

On a blue-sky day, I walked up the western slope of the San Lorenzo Valley High School campus, almost to the edge of Fall Creek State Park, to the Aquaponics Program.  Over the hubbub of harvesting, water tanks, chatter, and Stevie Wonder, Mr. Meyer’s voice echoed around the facility, “Okay, guys! Get to your stations.” As I took a passionate and student-led tour of the greenhouse and classroom, I couldn’t help but wonder where this program was when I was in high school.

I was guided through the facility by two SLVHS students and program members, Erin and Lucy.  Lucy gushed as we entered, “It’s a beautiful facility… Almost everything is student run and maintained.” Mr. Meyer, the aquaponics teacher, recounted the beginning of the aquaculture program in 1999 to restock the San Lorenzo River with steelhead trout.  Five years ago, SLVHS was approached by School Grown, a nonprofit bringing aquaponics facilities to high schools.  Aside from School Grown’s help, the center would never have been completed without generous donations from Mountain Feed, Scarborough Lumber, and San Lorenzo Lumber.  With plenty of volunteer help and passion from the SLV administration, the greenhouse was impressively erected in a month.  For the first three years, Mr. Meyer reported that School Grown “ran the center as a business, while students had access for classes and helped harvest.  At the peak, we could produce 500 heads of lettuce per week.”  After the trial period, SLVHS took over the facility and hired Mr. Meyer to teach courses and maintain the center.

In the greenhouse, a student explained to me the basics of aquaponics, “Plants grow on rafts with their roots dangling in the water.  The fish provide nutrients for the plants and the plants clean the water for the fish.  It’s almost entirely self-sustaining. We occasionally feed the fish and the fish provide for the plants.  It’s all student run and every now and then we sell our produce.” I was soon amazed by the wide range of organisms throughout the facility, including succulents, kale, cabbage, cilantro, broccoli, spinach, peas, tomatoes, aloe, yew flower, microgreens, hydrangea, duck weed, hops, chard, wheatgrass, gooseberries, California poppies, lettuce, strawberries, horseradish, worms, lady bugs, praying mantis, black flies, tilapia, trout, cat fish, koi, shrimp, chickens, and many other sorts of flora, fauna, and critters.

We had a lot of ground to cover in my hour-long tour, between the greenhouse, succulent garden, koi pond, chicken coop, compost area, sewage filtration pond, and vertical garden.  As we walked, I struggled to wrap my brain around the vast array of students’ skills.  Alongside from monitoring water and soil quality, clearing aphids, planting seeds, harvesting, tending to critters, marketing, and composting, the students contribute to many other activities as well. Students get the last few weeks of the aquaponics course to pursue an independent project, be it a new walkway, a mural, filtration system, or something entirely different.

One project, a koi pond, has been the site of a student led battle against herons, “A great blue heron comes and steals the fish, so we netted the whole thing.” While the students occasionally struggle to fend off some birds, they raise chickens.  The chickens are provided by the county, after they are used to monitor for West Nile virus of the population across the county. They sell the eggs, about 2-3 dozen per week in the summer.  Lucy explained another important role of the chickens, “We pick off aphid eaten leaves and feed them to our chickens, so we don’t waste anything.”

Like chickens, the vast number of other organisms makes the center unique.  Mr. Meyer summarizes the main lesson of the facility, “We’re trying to teach the kids that there’s a cycle and we need to complete it.  It’s a regenerative process.”  The aquaponics center is completely organic, so the students use “flowers to attract lady bugs to eat the aphids, as a part of their ‘Integrative Pest Management Program.’”  They also spend a lot of time hand washing aphids of off produce, instead of spraying pesticides.  Hops are growing on the side of the building to create shade and the compost will help fertilize the produce.

You can have the culmination of this student and plant communal effort on Instagram at SLV Aquaponics. Produce and succulent boxes are regularly posted for sale via the social media platform.  Erin explained, “We’ve been selling since the greenhouse has been up, but now we’re trying to structure the way we sell.”  Additionally, this past semester, the program hosted a winter’s farmers’ market.  They’re hoping to have another soon, in front of the Performing Arts Center. Lucy hoped to soon work with the Felton Farmers’ Market, “For our next farmer’s market, we’re asking a bunch of people to contribute.  We’d like [the next market] to branch out from produce.”

To learn at the center, students must take biology their first year, aquaculture as sophomores, and then enter the aquaponics class as juniors.  Some students, like the student in charge of maintaining and testing the water quality, impressively began to learn their skills “back in 6th grade.” To culminate their education, seniors help as out as teaching assistants and help maintain the center in the summer.  After graduation, there are many opportunities to continue their love of aquaponics.  According to Mr. Meyer, “Cabrillo has an aquaponics program, UCSC is putting one in, Davis has one, University of Kentucky has an outrageous program, so does the Santa Fe Community College.  There’s a lot of room for these kids to go.  We’re giving them a pathway to continue their education or get out into the field, like at Ouroboros Farms in Half Moon Bay.”

While student opportunities are greatly increasing, so are opportunities for the facility.  Mr. Meyer is excited to get commercial worm bins, use the school’s compost, and sell worms. Plant friendly solar panels are another step for the facility.  They’re made by a local Scotts Valley business, let in enough light for plants to grow, and would power the greenhouse.  As a bigger project, SLVHS is planning to build a bigger classroom for CTE classes, including science, aquaponics, aquaculture, and visual arts.  Mr. Meyer also hopes to expand the program with two other aquaponics and aquaculture classes. Between cultivating produce, maintaining water and soil levels, selling their product, expanding the center, composting, and caring for other organisms, the aquaponics program is teaching the tools of an admirable trade.

If you’re interested in learning more, you can reach Mr. Meyer at hmeyer@slvusd.org or check out https://www.instagram.com/slvaquaponics/?hl=en for the latest box!