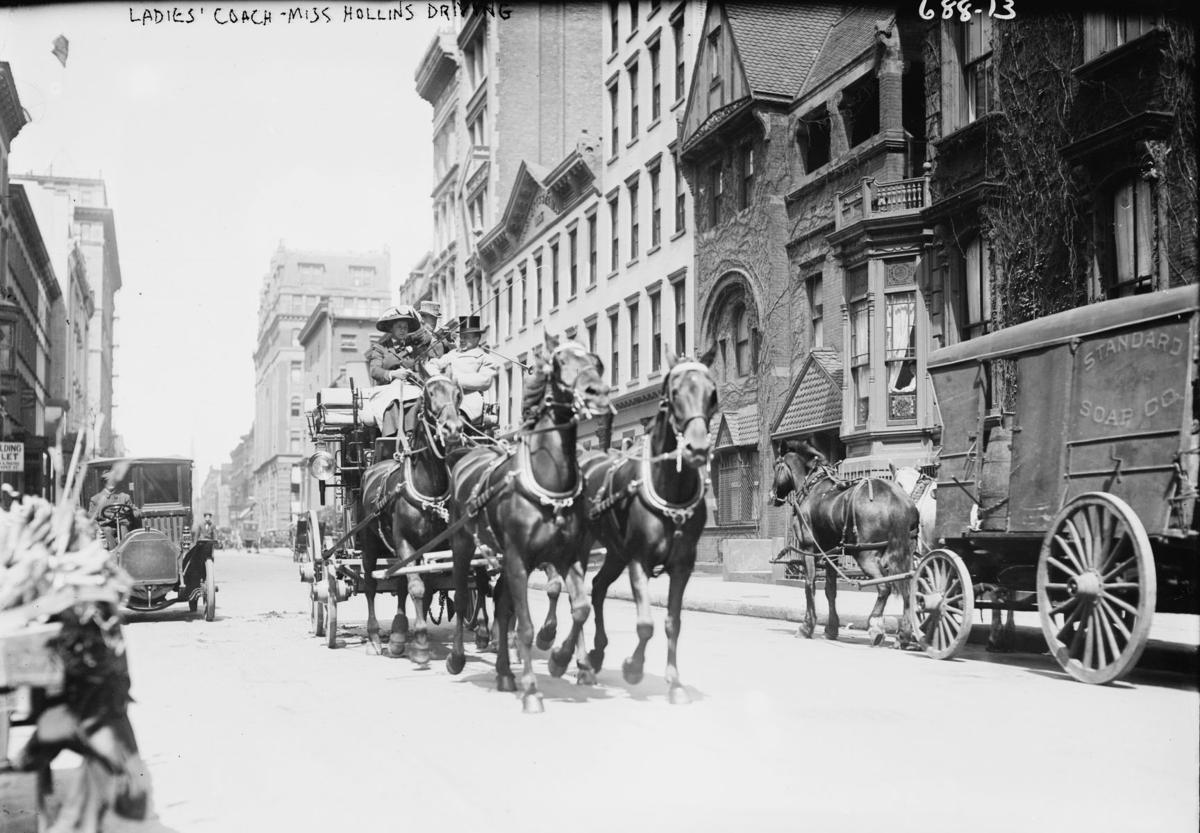 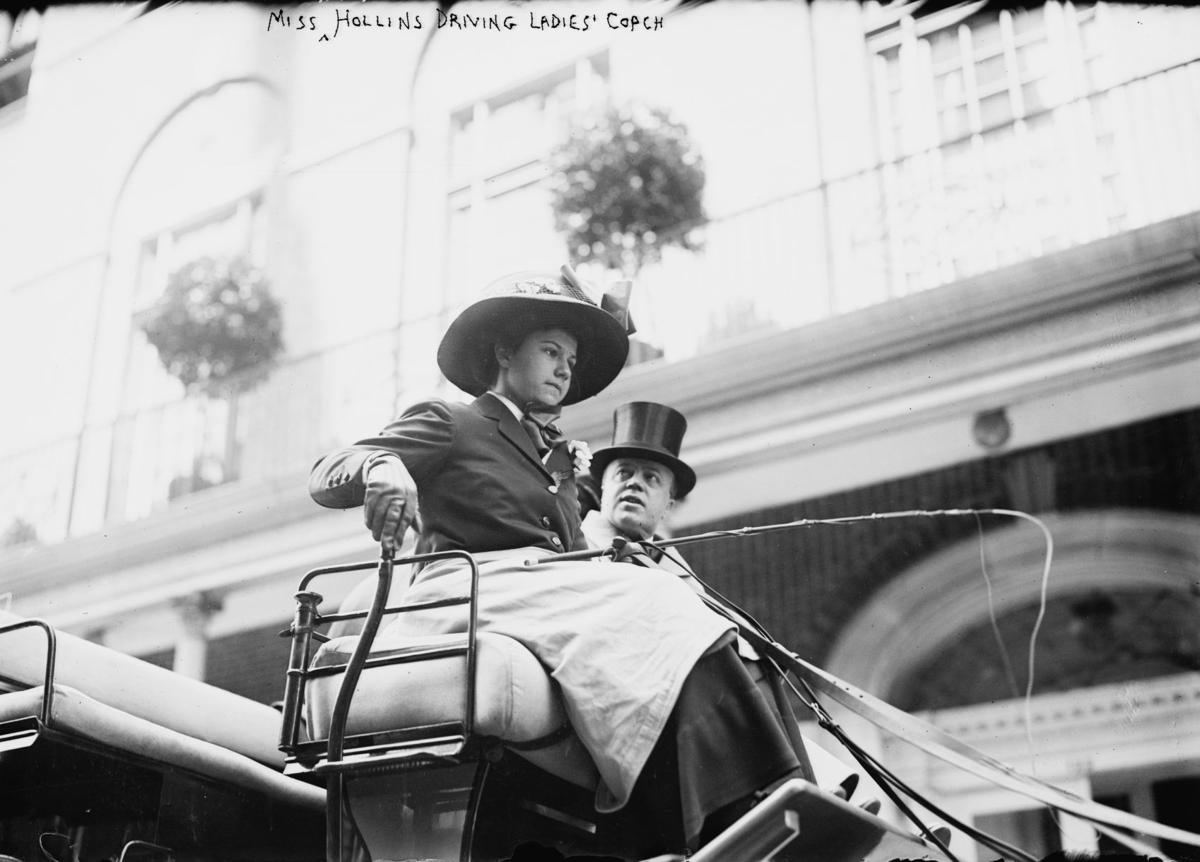 Santa Cruz County historians have a few bragging rights regarding famous residents of the past.  Zasu Pitts and Alfred Hitchcock represent the movies; Jerry Garcia, Janis Joplin, and Neil Young left us a musical legacy.  Sports not so much.  A few baseball players reached the big leagues.  Harry Hooper eventually was enshrined at Cooperstown—Hal Chase will never be.  This year, however, we can applaud another Hall of Famer—a golfer—and it’s about time.

Marion Hollins was not a typical debutante, which society reporters greatly appreciated.  “Miss Hollins can ride and drive, row and swim, play tennis and golf, better than most girls of her set,” observed one item.  “An accomplished and sensible young woman, in striking contrast to the helpless, affected maidens pictured in the average society novel as characteristic of that class.”

Her first claim to fame was as a “whip.”  The aristocratic sport of four-in-hand coaching crossed the Atlantic to New York in the 1870s.  Ornately decorated vehicles known as “drags,” driven by members of the city’s elite, staged parades up Fifth Avenue and through Central Park.  “It is just as expensive to maintain a coach as a yacht,” noted one reporter, “so the class that enjoys a sport only because it is impossible for the masses has taken up coaching with a zest.”

As automobiles arrived on the scene, horse-drawn coaches gradually disappeared.  Young men of leisure preferred fast cars and rarely chose to invest the time necessary to master the skill of managing a team of horses.  To revive interest in the sport, Morris Howlett, a prominent whip, decided to promote it to a new audience—society women.  “Coaching is one of the best outdoor exercises,” he advocated, “for it gives coolness and poise, besides bringing the roses to the cheek.”

The response was gratifying.  Shortly after the turn of the century, a number of “the most fashionable ladies in New York” organized the “Ladies Four-in Hand Club.”  It was an exclusive group, where competence counted as much as social status.  As they guided their coaches through city traffic, participants were evaluated—lapses in form resulting in demerits.  Before long, the women of the Four-in-Hand Club were ranked among the most proficient drivers.

In 1910, Marion Hollins became the youngest member of the club.  She had been handling horse teams since the age of 9 and Howlett, her tutor, regarded her as his prize pupil.  Her work handling the reins quickly attracted attention.  “With ease and grace she piloted the four-in-hand through congested Fifth avenue.  As the coach passed the Plaza near Central Park, many were attracted by the welcome notes of the trumpeter, and smilingly raised a little cheer for the intrepid whip on the box.”  “She is some pumpkins,” enthused one of the reporters invited along for the ride.   “The greatest thing in coaching, I learned, is to be able to make a long drive without an accident and arrive at the destination not one minute ahead of time, not one minute behind, but on the dot.  That’s what our intrepid driver did to a gnat’s heel.”

She also did her best to promote her pastime.  “Racing is referred to as the sport of kings,” she commented, “but I don’t think it compares with coaching in the first place, I think it requires more training, and in consequence more dexterity, to handle four horses to a coach than it does to pilot a runner around a beaten track.  The woman who can handle a four well, and by that I mean getting all there is in them out of her span and at the same time never fretting them and reserving their strength for the supreme tests, is a good horsewoman—in fact, the very highest type of horsewoman.”

Her enthusiasm for driving, however, was not limited to coaches.  She was increasingly seen behind the wheel of her own automobile.  “As to motors, Miss Hollins preserves a rate of speed that does not encourage moss to grow on the tires of her vehicle.”

Although her success as a whip was confirmed by numerous press clippings, after several seasons navigating coaches through New York traffic, it became obvious that the coaching fad had run its course.  As she contemplated the future, Marion Hollins realized that her ambition of achieving athletic excellence would not be satisfied by four-in-hand driving.  There were, however, other sports becoming available to women.  And, as one observer noted, ”Miss Hollins is also a golf player of no mean ability.”