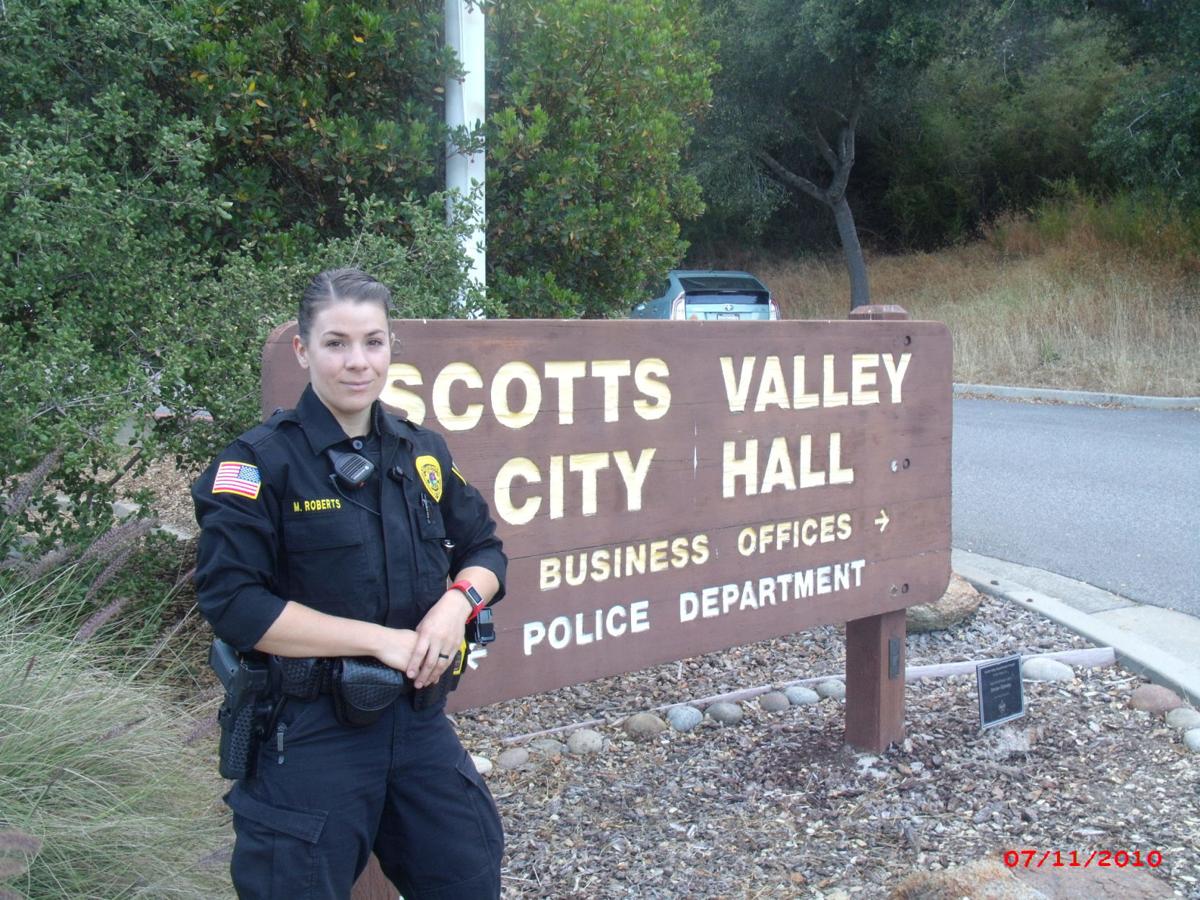 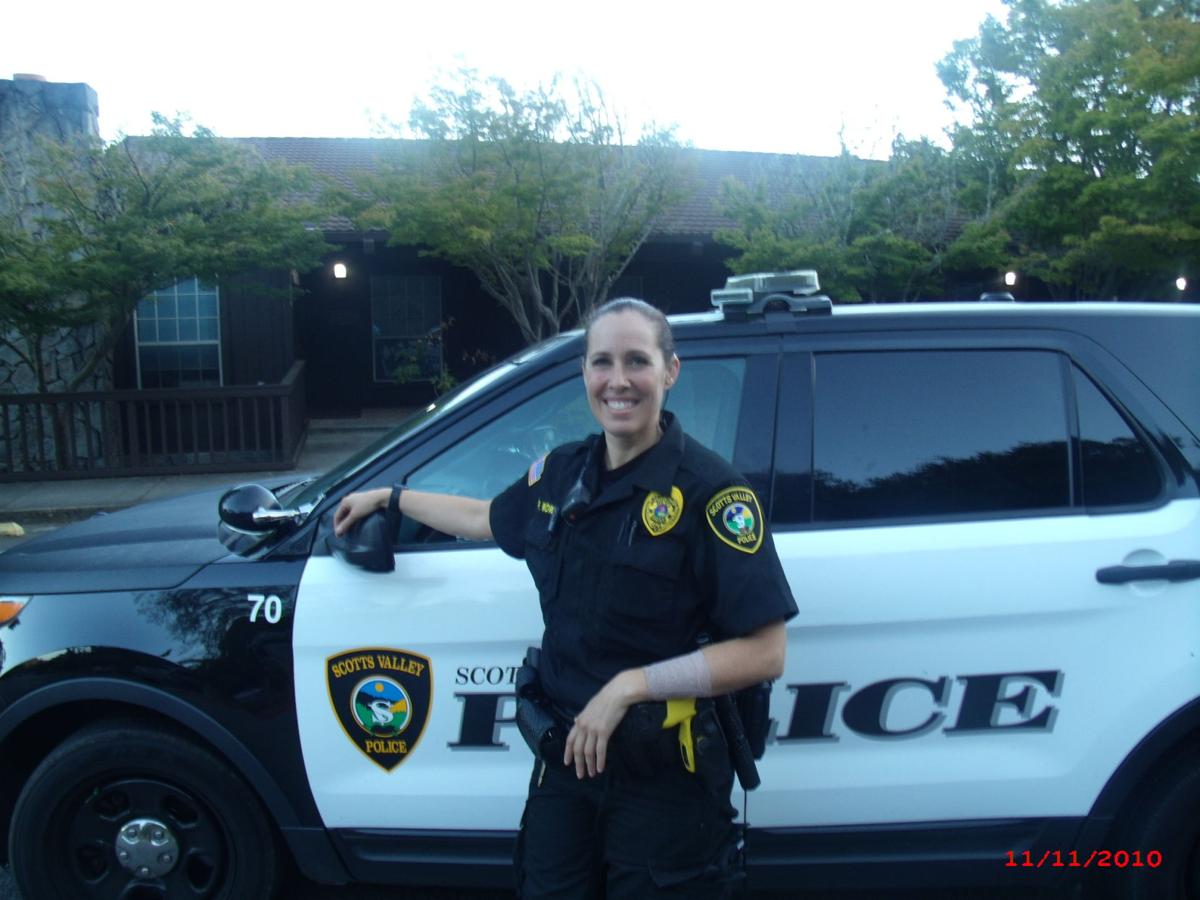 Scotts Valley Police Chief Steve Walpole seems to be following the recommendations of several studies finding that woman police officers improve the overall performance and reduce complaints of police violence in major cities across the country. After several years of turnover and vacancies in the Scotts Valley Police Department, the department is now fully staffed with the addition of two new female police officers: Officer Meredith Roberts and Officer Pascal Wowak.

Officer Meredith Roberts graduated from the police academy in December 2017, completed her 17-weeks of field training in Scotts Valley in April, and is now riding solo patrols as a sworn police officer. The only other female officer on the force is also new to the department, Officer Pascal Wowak.

Roberts married into a family in which law enforcement is something of a tradition- her husband is a Santa Cruz County Deputy Sheriff, and she has a brother–in-law on the force in Scotts Valley. Two months ago, Roberts and her husband bought a house in Corralitos, which gives their younger daughter plenty of yard to play in, Roberts said.

“It was always a dream I had, to become a Scotts Valley police officer, but at the time, before I went to the Police Academy, I wanted more life experience, and wanted to be with my daughter after she was born,” Roberts said.

According to Roberts, it is the challenge of solving different problems every day, the lack of routine and not knowing what each day will bring that attracted her to law enforcement.

“With every contact-it’s something of a puzzle, trying to figure out how people communicate,  how they tick, and figuring out how to adapt to that and help them with whatever is going on in their life.  I like the need for quick thinking on your feet,” Roberts said.

Having grown up in Scotts Valley was also a motivator for Roberts. “I wanted to give back to this community because it was such a safe haven for me, and I wanted to continue that tradition… that sense of safety that I like so much about Scotts Valley,” Roberts said.

Officer Pascal Wowak, 45, came to Scotts Valley with more than 24 years of police officer experience, and just finished her field training in Scotts Valley.  Having lived in Scotts Valley for 17 years, and working as police officer in Walnut Creek and Sunnyvale, Wowak was also strongly motivated to continue her career in the town she had adopted and considers home.  Wowak paused her police career for a few years when her two children were infants, now 15 and 13 years-old, and worked as a commercial photographer.

“I couldn’t wait to get back.  I missed it every day I was gone. There’s no other job like it in the world. Every day is a big question mark,” Wowak said. “You never know what you’re going to happen… there’s so much opportunity to do so much good… It’s so rewarding, there’s nothing like it.”

When Wowak first started as a police officer 1994, she said there were virtually no mentors or role models for her, and female police officers were an “anomaly”.  Law enforcement draws a certain personality Wowak explained, those with a strong temperament, and a certain emotional and physical strength, and a strong commitment to help others “that almost transcends gender,” Wowak said.

But Wowak recognizes that women police officers usually bring a different skill set than male officers. “We’re better communicators, generally...It’s what we’re taught to do,” Wowak said. “I was a cop before I was mom, and now I’m a cop as a mom     and I can’t help but notice the difference. I’ve found that my ‘mommy voice’, especially with intoxicated males, is incredibly effective. I’m actually bewildered at how effective it can be,” Wowak said.

Lind believes women police officers are vitally necessary, especially for their ability to deescalate and balance contacts for domestic violence, investigating sexual assaults, and interviewing children.  But, Lind explained, women shouldn’t expect to get the job at any lessor standard than men.

Lind explained there is a six foot wall at the police academy that prospective officers must be able to scale and get over quickly as part of on-going agility tests. Lind said that wall is the same height for both men and women, and is not meant to discriminate, “you just have to get over it,” Lind said.

Lind said she been following Officer Roberts career. “I’m very proud of Meredith,” Lind said. Lind complemented Chief Walpole for both his efforts to recruit women, and especially going the extra mile trying to recruit locally, for police officers with real ties to the community.