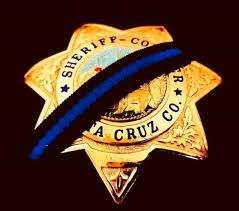 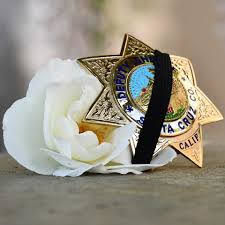 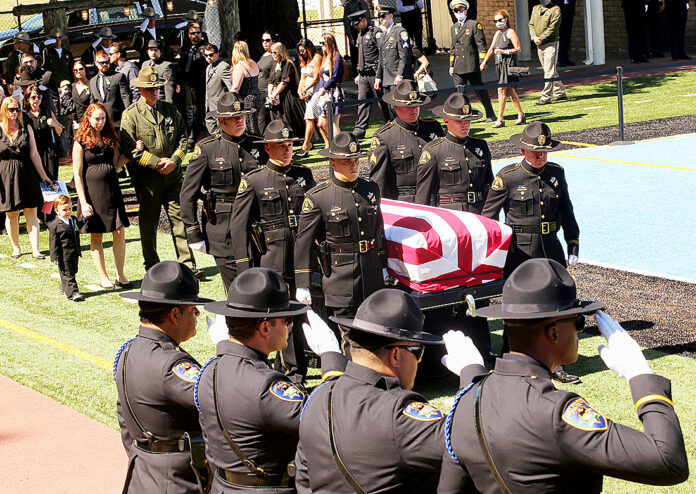 On the morning of June 17th, thousands gathered under the summer sun at Cabrillo College to honor the life and celebrate the stories of Santa Cruz County Sheriff’s Sergeant Damon Gutziller. The ceremony, led by Twin Lakes Church pastor René Schlaepfer, opened the Lord’s Prayer. “May his family sense our collective love for Damon, and our support and love for them,” he implored. “We pray for all uniformed personnel. Let them sense the gratitude of our community today. We pray that our community may be filled with faith, hope and love.”

“I slept with the lights on for four nights,” recalls Clara Racabal, the RN who took the video of two male residents pinning Carrillo to the ground in Ben Lomond, and subsequently beckoning law enforcement to come provide assistance. Racabal was on her way to Felton when she noticed a flurry of police action ahead of her on Highway 9 in Ben Lomond. She pulled over and struck up a conversation with two gentlemen along the road. “I arrived at the scene around 3:15pm,” says Racabal, “and at that point, we all knew what he (Carrillo) was accused of.” Though Racabal nor the residents ever saw the white van that Carrillo had allegedly used during the incident, they all saw the other weapons that Carrillo had once they got him on the ground: a pipe bomb, AR-15 style rifle and pistol. They also saw the gunshot to Carrillo’s leg. When the two men had started searching for the suspect, they knew he had to be close. One neighbor searched in a yard that had a child’s play structure in it. As he peered into the tube-style slide, he saw the suspect’s feet—and a puddle of blood that had gathered from the gunshot wound.

Sheriff Jim Hart began his speech by acknowledging the police first. “You guys are amazing and I love you for that, thank you. It was a bad call,” Hart said. “Our people saved many, many lives. I want to thank all the community members—our deputies are loved, and if you watched the procession (for Sgt. Gutzwiller), you saw hundreds of people lining the streets to show their appreciation.” Hart also thanked the “dozens of law enforcement agencies and officers who have poured into our community to protect us. On that day, more than 40 agencies responded, not to mention our fire brothers and sisters, dispatchers, EMS crews. To all police agencies, I will forever be in your debt,” said Hart, and he acknowledged that his deputies feel the same way. “We are humbled by what they have done. The FBI showed up with 50 people to process the crime scene, and they flew in teams from Quantico to help. Hart had known Sgt. Gutzwiller for 20 years, and promoted him to Sergeant just last year. “Damon showed us what it means to be generous of energy and spirit, and unflappable in the face of life’s challenges. If I could fill my department with Sgt. Gutzwillers, I would,” said Hart. He ended his address by saying, “Let’s make Damon proud.” And then, with tears in his eye, he left the stage, approached Damon’s family, and got down on one knee in front of Gutzwiller’s widow, Favi, as he presented Damon’s 2-year old son, Carter, with his daddy’s badge.

There were two men who held Carrillo to the ground until law enforcement could get to their location. Hart recalled their efforts in the memorial. “On that day, two deputies were ambushed, but a civilian looked madness in the eye, said, “Not in my town,” and swatted away a bomb, a rifle and a pistol.” He thanked them for stopping the rampage, and shared appreciation for the communities of Ben Lomond, Felton, and Boulder Creek as businesses and residents brought water, food and love to the deputies. For now, though, at least one of the men wishes to remain anonymous.

On June 10th, three Felton Business & Community Association members erected a thin blue line American flag, which represents law enforcement and is flown to show support for the men and women who put their lives on the line every day to protect this nation, at the corner of Highway 9 and Graham Hill Road. Were Sgt. Gutzwiller’s death being acknowledged in a vacuum, the raising of that flag might have been a more neutral statement; the country is not in a neutral place, though, given the murder of Minneapolis resident George Floyd on May 25, 2020. When the thin blue line flag went up—four days after Gutzwiller’s murder, and 16 days after Floyd’s—protestors for the Black Lives Matter movement found themselves sharing their message beneath the flag that, in their eyes, represented the oppressors. Some might recall that, several weeks ago, a P.O.W. flag had waved on that very pole, but the process to raise that flag had included a petition, and the veteran who advocated for its installment had gone through hoops with various agencies to ensure he met all the prerequisites.

The thin blue line flag’s appearance signaled a break with the BLM movement, and Felton businesses began receiving angry emails from residents who disagreed with the messaging. Now, after suffering significant financial losses due to COVID-19, business owners find themselves again struggling to remain open as their sales are diminished by the confluence of a flag and its meaning.

Other public servants shared their love and respect for Sgt. Gutzwiller. Mark Ramos, Deputy Fire Chief for Santa Cruz City Fire (retired), openly wept during his remembrance. He recalled the time that Gutzwiller had announced that he and wife, Favi, were trying to start a family. “We’re playing without a goalie,” Ramos remembered, and the crowd at the memorial laughed. “He was so excited to become a family,” said Ramos, and the tears flowed freely. “Damon, we will honor your life by loving your family,” he said. “Until we meet again.”

Santa Cruz Sheriff’s Sergeant Steve Ryan called himself blessed to be a close friend of Sgt. Gutzwiller. He told the tale of how he and Damon had joined the SCSO Drone Team, and made themselves flight jackets (which upset a fellow officer that was a licensed pilot). In keeping with his wicked sense of humor, Gutzwiller changed his phone’s ring tone to the “Top Gun” theme song; Ryan called Gutzwiller during a briefing and the ringer exploded with “Danger Zone.”

Sgt. Chris Shearer, with SCCSO, acknowledged that his memories are a lot easier to write than they are to say. “There are moments in your career that will knock you to your knees, and this is one of them. I’ve never been more proud in my life to be a member of the Sheriff’s Office than the day of that incident.” To Gutzwiller’s son, Carter, Shearer said, “Sitting behind you is a never-ending sea of tan and green. Those are your brothers and sisters that are never going away…and this is the community where your daddy’s story will be told. Be loyal, be honest, be Damon. Your daddy’s a hero, Carter, and we love you.”

Damon’s widow, Favi, spoke through tears and deep, palpable grief. “Some things are too big, too beautiful to describe, and a picture will never do it justice. That’s how it is with Damon. He wasn’t like anyone I’d ever met before.” She recalled how she had told Damon early in their relationship that she didn’t want to have kids. Now 38 weeks pregnant and the mother of 2-year old Carter, Favi shared how she had changed her mind. “I wanted to have children with Damon because he would be their father.” During their relationship, Damon carved a Celtic lovespoon for Favi on Valentine’s Day, and included a note where he explained the meaning of the symbols etched in the wood: an anchor, a heart, a keyhole and a spade. “This is the man we are missing, and the father our new baby will never meet,” Favi cried. “I can only hope that our children will grow up to be just like their father. I pray for the strength to raise the amazing children he would have raised. I know that I will carry Damon in my heart and through my children forever.”

Finally, Pastor René implored the crowd to “Honor Damon by taking one of his qualities and prioritizing it as yours. Seek to multiply the good in Damon’s life into your own. I give you this charge: if you knew Damon, you must be the repository of memories of Damon for his children. Please seek them out over the years, tell them these stories and how much you loved him. This will not hurt them—it will help them more than you know. There is no greater love than this, that he laid down his life for his friends. May we all go forward with the same determination.”

An SCCSO dispatcher called out End of Watch for Gutzwiller’s call sign as his casket rolled through the Wall of Honor created by uniformed personnel, and those in attendance stood at attention as Favi, Carter, their family and friends trailed the casket, beginning a life without the man they love, and the man who loved them all so deeply.

The thin blue line flag was torn from its mounting sometime on Sunday, June 12th. Aggrieved community members hadn’t felt as though the FBA had heard them—none of their emails had been responded to by then, and they were looking for action. Although the person responsible hasn’t been identified, one active community member acknowledged that this is a time for everyone to have their voices heard. “Our community is dividing rather than coming together when we need it. We are not immune to the travesties of the world. We have lost one of the good ones, Sergeant Gutzwiller. We had a terrorist in our own backyard failed by the healthcare system, whose kids go to school with ours and will need our support. Racism exists in our community and can spread like wildfire. We can only heal by listening, becoming education, and actively making a change.”

Perhaps the memories of Damon Gutzwiller will soften the upset and division in our community, and result in a more cohesive environment for us all.