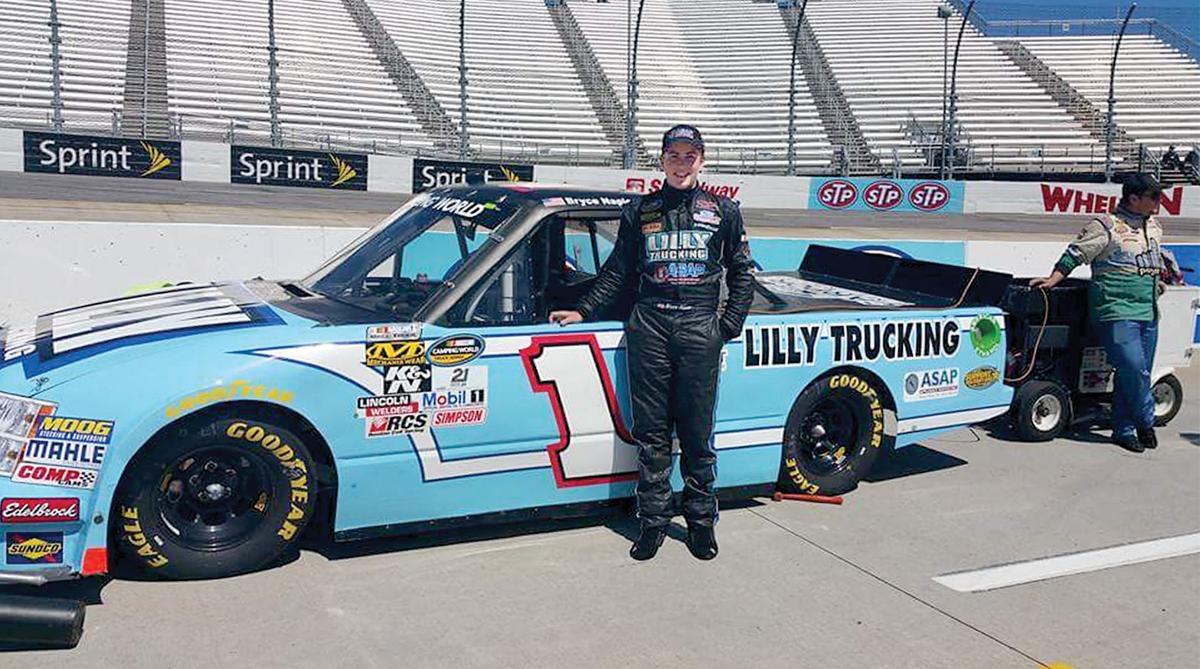 Bryce Napier, 16, a NASCAR Camping World Truck Series driver stands with his truck on the track at Martinsville, Va. on April 2. 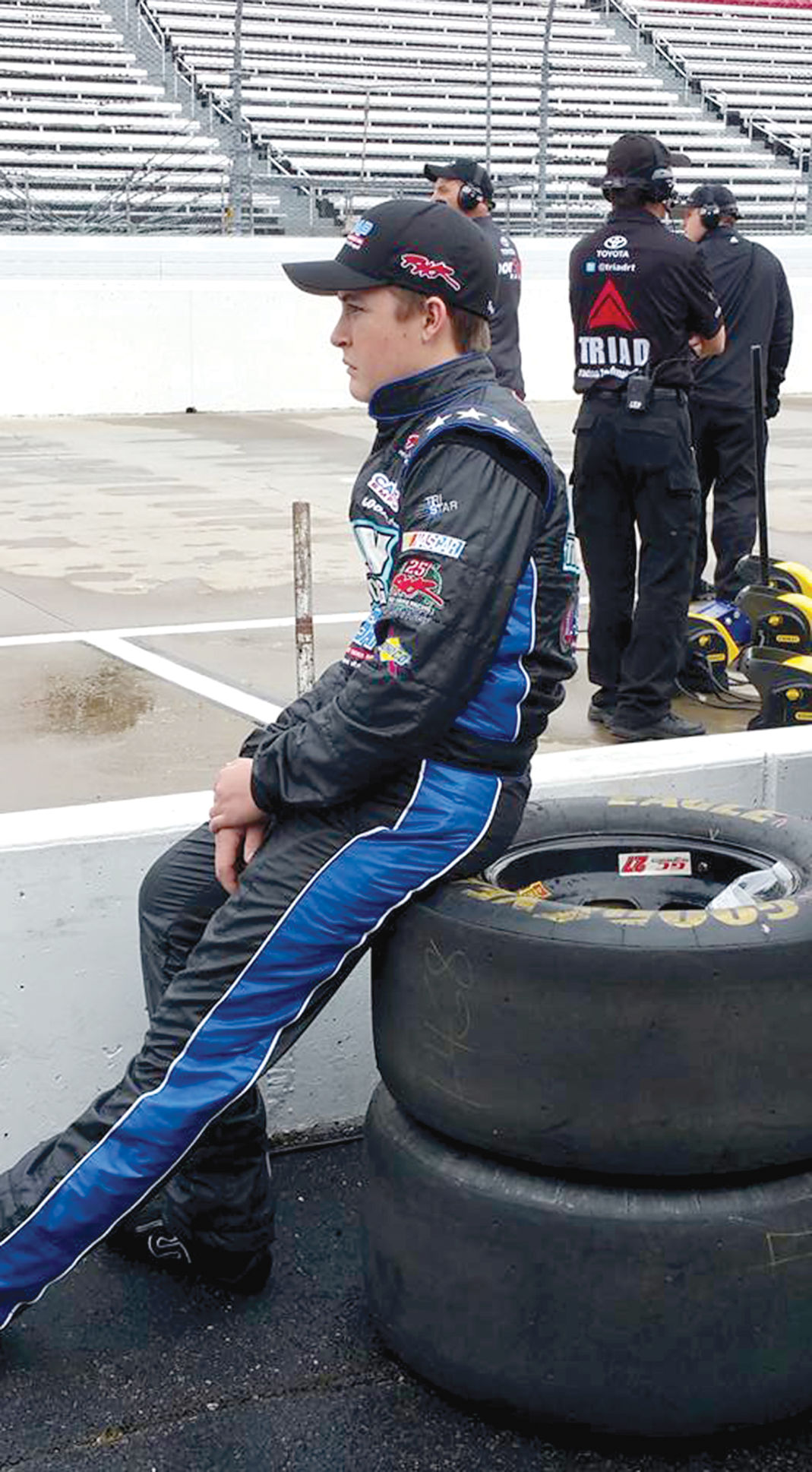 Bryce Napier, 16, a NASCAR Camping World Truck Series driver waits in his crew pit for his first race at Martinsville, Va. on April 2. 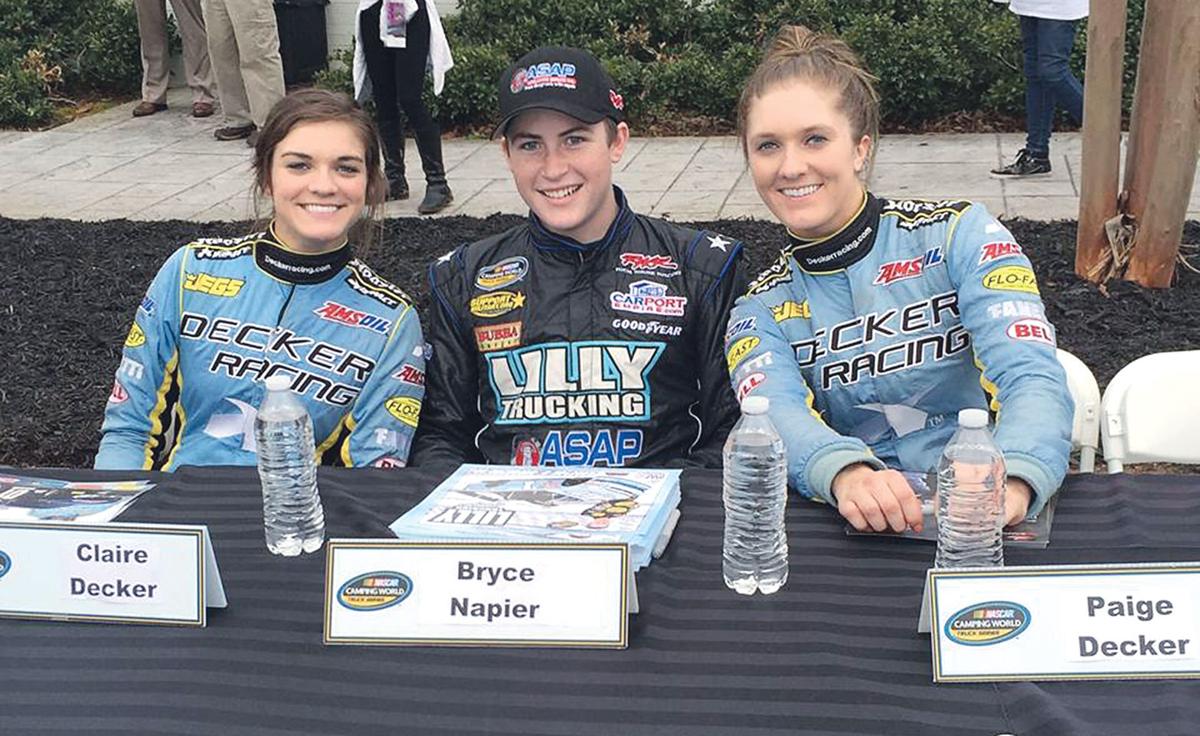 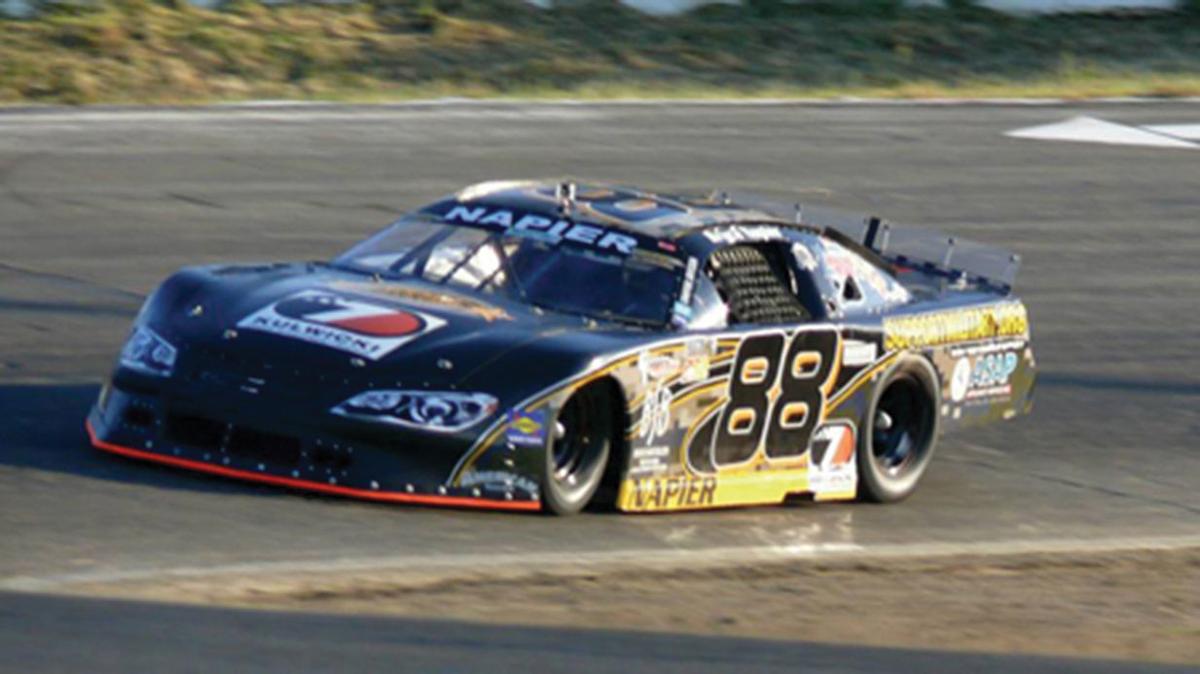 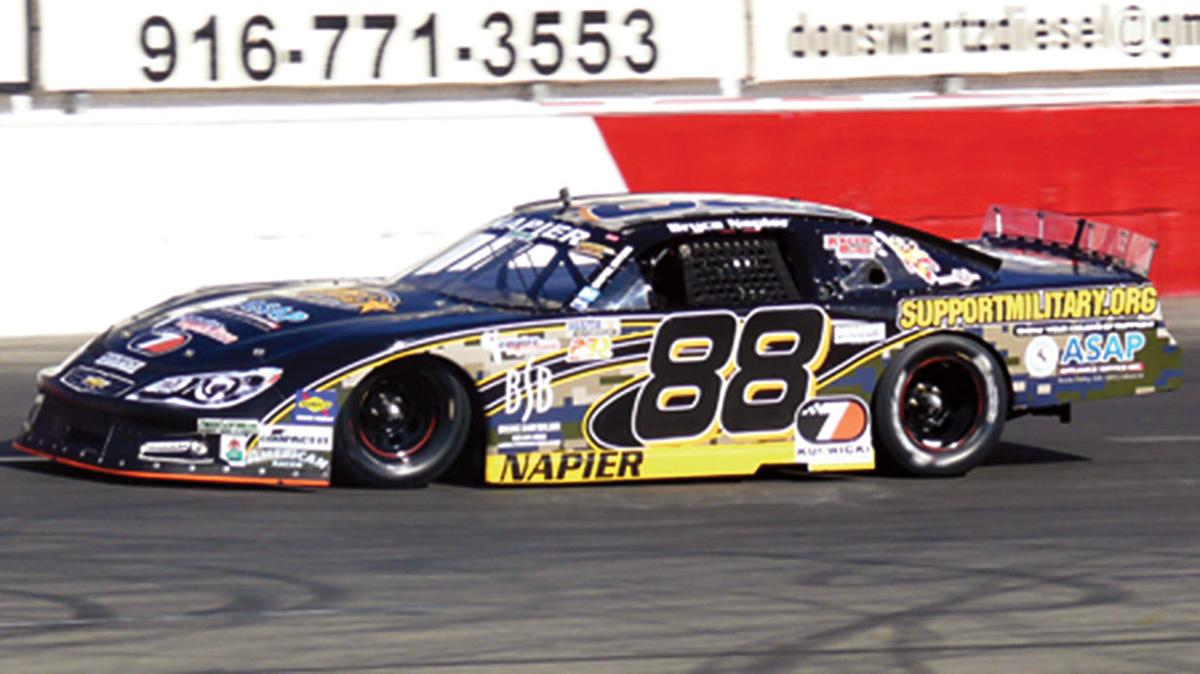 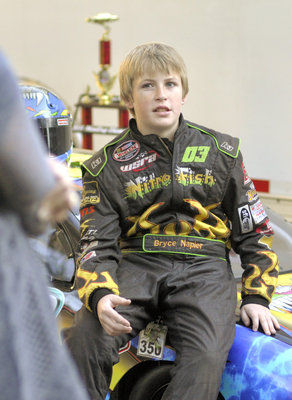 Bryce Napier, 16, a NASCAR Camping World Truck Series driver stands with his truck on the track at Martinsville, Va. on April 2.

Bryce Napier, 16, a NASCAR Camping World Truck Series driver waits in his crew pit for his first race at Martinsville, Va. on April 2.

Bryce Napier only recently got his California driver’s license, and when he speeds, his family just cheers him on.

“I started competing when I was 5½ or 6,” Bryce said in an interview Tuesday — 10 days after driving in his first NASCAR race.

At 16, Bryce may be the youngest driver in NASCAR history. After getting approval from NASCAR, Bryce started at the back of the pack at the Alpha Energy Solutions 250, a Camping World Truck Series race in Martinsville, Va., on April 2.

It’s the latest mile in a long journey for Bryce.

“I want to eventually be a Sprint Cup racer,” he said, referring to the top tier of professional NASCAR drivers. “I got my real car at 6. A quarter-midget.”

That 13-horsepower quarter-scale race car that began Bryce’s racing career was the logical extension of his love of cars and speed.

“My first memory is when I had Power Wheels. I had a yellow Corvette. It was never fast enough for me,” he said. “My neighbor and I were always working on it. We hit it with a hammer and said we were making it faster. We would ride it around the driveway. I put duct tape on the tires to get more grip going up our steep driveway.”

“He just took to it, racing all over the place,” he said.

Napier said he and his wife then got Bryce a powered go-cart, then the quarter-midget, then a third-scale NASCAR car which Bryce used to compete on tracks at Stockton, Madera and Roseville. Eventually they got him what is called a baby grand — a two-thirds scale racer — that he raced until two years ago.

“When he turned 14, he raced a full-sized late models. It had 500 horsepower,” Napier said of the so-called ‘late model’ racer. “A lot of people we raced against thought we were crazy to put him in the late model.”

Bryce didn’t just drive his cars. He wanted to understand what made their performance change.

“When I was in the late models, I did about 70 percent of the work on the car during the week when it was at our house,” he said. “I do a lot of the work, which helps, because if you don’t work on the car, it’s not as good. If you know the car, it helps me tell the crew what to do, because I know what the adjustments do.”

It’s not the first time Bryce got involved under the hood.

“I’ve been working on the cars ever since I was a kid. Working with my dad and my brother late at night to get ready for the weekends. It’s definitely a lot of work, but it’s worth it,” he said.

The 16-year-old talked about how much of racing is dependent upon the team around you — your spotter, crew chief and pit crew.

“It’s good to have a friendship with your spotter and your crew,” he said. “It’s definitely a team sport, for sure. They’re doing their part, I have to do my part.”

With his late-model car, Bryce finished second for the season at the Stockton track and was named Rookie of the Year there — and NASCAR was watching.

Rick Ware, team owner for Rick Ware Racing, invited the 16-year-old to take the driver’s seat of his truck for the Alpha Energy Solutions 250 two weeks ago.

“We’ve worked a fair amount with young guys before. Bryce is the youngest guys we’ve worked with,” Ware said in a phone interview Wednesday. “I heard how good he was, how he listened, his attitude.”

Ware, a former NASCAR driver who has trained and debuted many rookie drivers, said Bryce is special.

Ware said Bryce proved it on April 2 in Martinsville.

Bryce began at the back of the 32-driver pack. He passed nine other drivers, finished in 23rd place and had only one on-track bump with another racer — NASCAR champion Kyle Busch.

“I did have a little rubbing with him,” Bryce said with wry humor in his voice.

It was Bryce’s conduct throughout the race that impressed Ware.

“Bryce is racing against Kyle Busch — arguably one of the best in history,” Ware said. “He did really well. He didn’t tear the truck up. He listened. He did everything right.”

Bryce said he was fine with 23rd place but had bigger goals in mind. He met Tuesday in Livermore with potential sponsors and is trying to get into the NASCAR Camping World Track Series at Iowa Speedway on June 18. It’s all part of his quest for first.

“Finishing first is the biggest deal,” Bryce said. “Me being young, most of the guys I’m racing are older than me. So you want to get respect, race them clean, and gain their respect.”

Bryce said he’s also racing something else — his own ability.

“You’re always pushing yourself to go further and push harder,” he said. “You have to know your limit to where you can push it, but also push it as much as you can.”

Get more information about Bryce’s racing career at www.brycenapierracing.com.