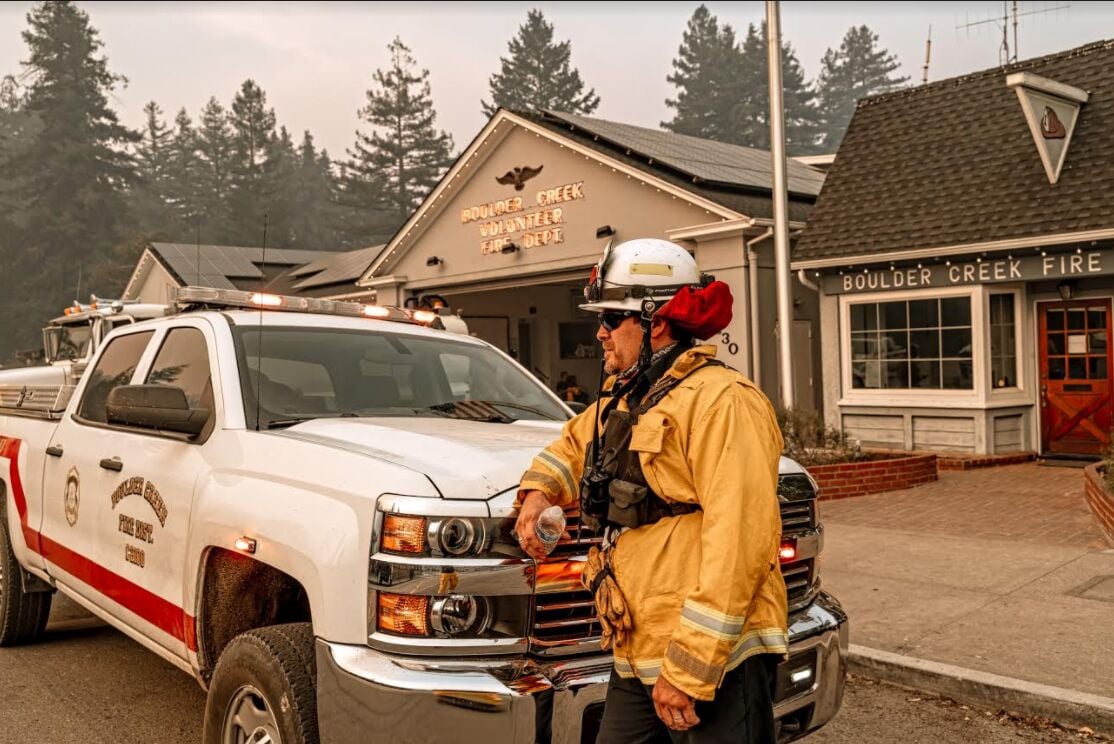 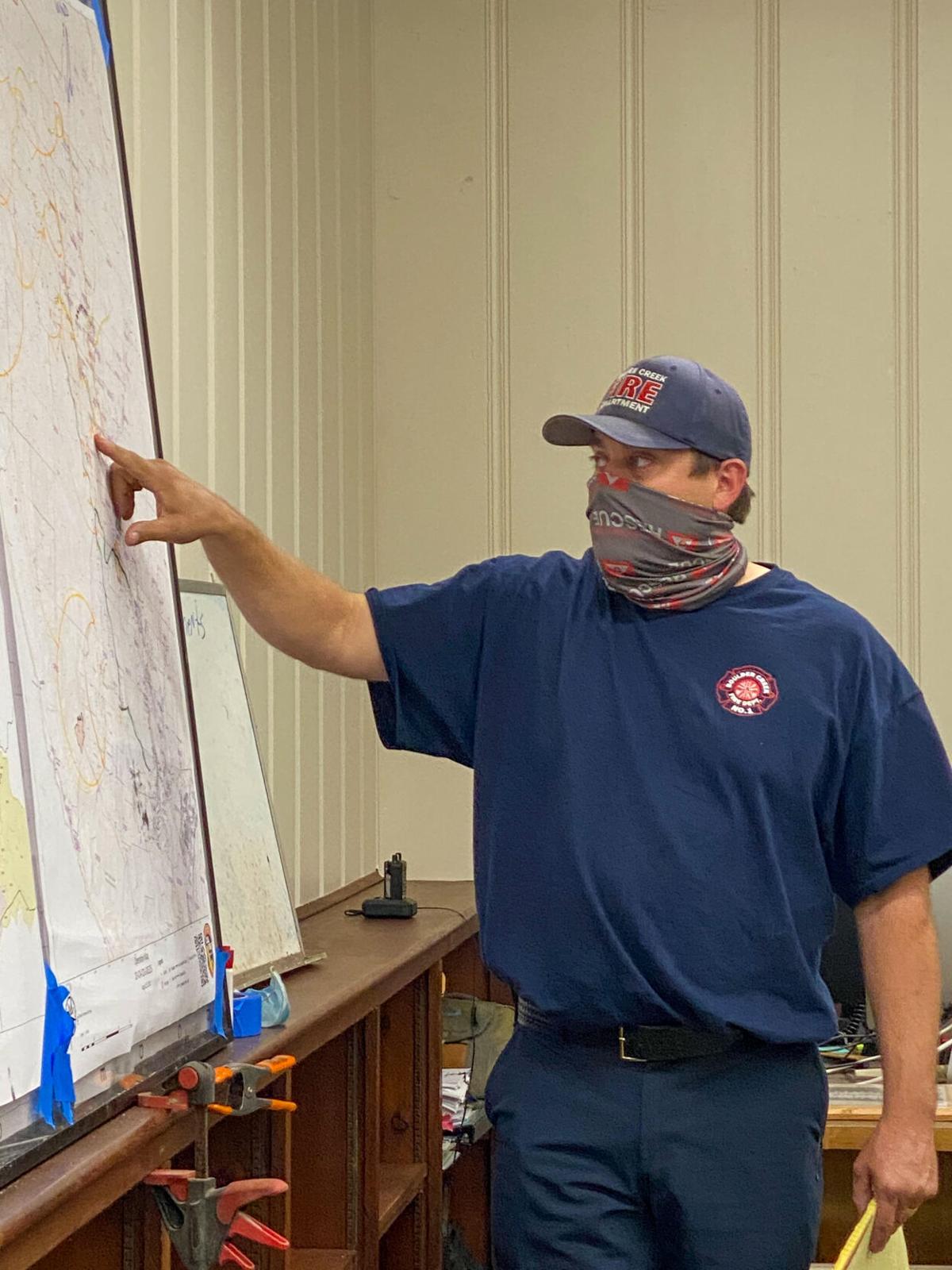 Most of us were sound asleep. A raucous, powerful gust of wind followed by a roaring clap of thunder woke the San Lorenzo Valley in the early hours of Sunday, August 16th. Trees heaved, branches toppled onto roof tops, and transformers exploded as lightning crackled in the sky, sending bolts of electricity coursing through the swirling night air to make contact with the ground. Social media pages erupted with reports by thousands of locals who were stunned by the sudden ferocity of the storm, sharing photos of purple skies lit with streaks of lightning touching down in our mountains. Many of us simply watched in awe as we stood silent witness to the severe thunderstorm passing over our heads. The rain came an hour after the start of the storm that delivered nearly 11,000 lightning strikes. In stark contrast, morning dawned quietly, as if worn out by the effort of the night. There was debris and damage scattered throughout the area, but on that Sunday morning, it seemed the worst was past.

DESIGN – Put a colored break here for start of the story

Boulder Creek Fire Protection District Chief Mark Bingham is relatively new to his post, but not new to his industry of fire suppression and prevention. Bingham cut his teeth with the Ben Lomond Fire District beginning in 1995; in 1998, he joined the Boulder Creek Fire Department (BCFD) as a firefighter, and in 2001, he was hired by NASA Ames Fire Department in Moffett Field. As is true with most volunteer firefighters who hold simultaneous positions with paid departments, his experience with each agency benefitted the other. In 2005, Bingham was promoted to lieutenant, and then to captain in 2007. Suffice to say, Bingham, 41, is seasoned for his age. In August of 2019, Bingham’s promotion to Assistant Fire Chief was announced, following the pending retirement of then-chief Kevin McClish. Chief Bingham took the reins of the department as Fire Chief beginning November 1, 2019 with the full support of BCFD’s Board of Directors and personnel.

In a town like Boulder Creek, nature has a way of calling the shots. Heavy rains cause mudslides, which close roads and trap residents; trees topple after storms, taking down utility poles and leaving neighbors without power and internet access; pavement gives way when the earth beneath it is saturated, and major travel arteries like Bear Creek Road and Highway 9 are squeezed into one lane until the roads can be safely restored. Local businesses and long-time residents know the drill. They lean on each other, and provide support when basic necessities are compromised. Johnnie’s Super Market keeps a rain gauge on its wall to track the inches of water inundating the town each winter, and Red Pearl’s Jenny Wu is beloved for her generosity towards customers in times of need. Cities are cities, but towns are families.

DESIGN – Put a colored break here for start of the story

Mark Bingham was sleeping in his family’s trailer the night of Saturday, August 15th. A heat wave had settled into the San Lorenzo Valley with still air and record temperatures, making Bingham’s Boulder Creek home too hot to sleep in. Even with the air conditioning running in his fifth wheel, Bingham was still blanketed by the heat held beneath the canopy of redwoods, pine trees and oaks on his property. Through the branches of the towering trees and the grade of earth that rises behind his home, Bingham watched the lightning flash. He sat up in bed, took notice, and mentally began to prepare for battling what was yet unknown, but inevitable: the firefight of his life.

“I’ll go back as far as I can, and try to work forward,” Chief Bingham told me. I was perched in a well-worn black leather chair, seated across the desk which has played host to multiple fire chiefs since the department’s inception in 1892. “I don’t want to ask you any questions,” I told Bingham at the outset of our interview. “I just want you to tell me your story, and how it all played out.”

“Somewhere around the wee hours of the 16th, the storm was coming through San Lorenzo Valley pretty hard. I’ll never forget it: I woke up around 4:30am to lightning, thunder and my phone and pager going off, alerting me to the incident, and requesting me specifically. It was a CalFire request to Boulder Creek for Chief 2100 to respond to a fire. It was about two miles outside of town, and I wasn’t able to see how many resources were coming, but I was told that other units were being ordered, so I asked our dispatch center to send one of our Type-3 apparatus. Engine 2137—our water tender—was dispatched.”

A water tender is a type of firefighting apparatus that specializes in the transport of water from a water source to a fire scene. Water tenders are capable of drafting water from a stream, lake or hydrant. - Wikipedia

“When I got out there, we found the fire below a house; we went direct on the fire and were able to contain it. I became more of an Incident Commander (IC) as additional resources arrived, and we ended up with two CalFire engines and a hand crew.”

There are two types of hand crews. Type I crews focus on constructing fire lines (areas designed to stall progression of the fire) by hand in areas too rugged or where environmental sensitivities prevent heavy machinery. Type II crews mostly construct fire lines to help contain and control wildland fires and can perform initial attacks on fires. - California Conservation Corps

“I looked off the ridge; we were on the end of a bluff, and I could see lightning hitting the ridges in all directions. We would see a lightning strike, and then a column of smoke rise up. Before I could even call it in, other people were on the radio, saying that they were seeing the same thing. That’s when it dawned on me that there were a lot of incidents going on before BCFD got the call, and CalFire was already out there working those fires. I was dispatched to the 3-10 Fire. If you have multiple fires at the same time, those are called complex fires, and they are assigned numbers to break them down according to location. The “3” stood for CalFire Battalion 3, which is located in the San Lorenzo Valley, and it was the 10th fire. That’s when I realized that this is what we were going to do all day. My experience working for CalFire’s Shasta-Trinity unit mirrored this event—we would watch lightning strikes pound the area, and then spend two days chasing fires—so I knew we were in for the long haul.

“I came back to the station, and that afternoon we were called back out again to assist CalFire in their area, miles outside of our fire district. I knew these fires were threatening the Boulder Creek Fire District, and all of the valley districts cooperate with CalFire and each other, so I went back out with another water tender. This time we were dispatched to North China Grade Road, and when we got up there, we saw multiple columns of smoke going up from the ridges. We called for support and were told there were no resources coming. We were able to do fire attack and officially get containment, but it took overnight and into the next morning, which was Monday the 17th. At this point I thought the threat to Boulder Creek’s Fire District was mitigated.

“Some of our folks slept on the line that night; I was able to get released by CalFire, and our tender and type 3 came back the next day. That Tuesday mid-day we got called out to an unknown type of fire at Crows Nest and Tradewinds on the top of East Hilton. There’s a logging property up there, and I knew there was a truck trail that was accessible, so I raced up the hill and met with the Redwood Empire (logging company) representative. He took me down the ridge a bit, maybe a mile in, and showed me a spot fire that had burned out a 10’ x 10’ area.

A spot fire is a fire started by flying sparks or embers (sometimes referred to as firebrands or brands), at a distance from the main fire. - Merriam Webster

“He’d already put it out, so I called CalFire, and a prevention officer came out. He was hoping like heck that it wasn’t a spot fire, but he came to the same conclusion I did. He agreed to notify someone from his agency, and just then, we watched as a glowing, smoldering rat’s nest landed  right in front of us. I turned to the CalFire officer and said, “How close is the closest fire?” He replied, “Oh, it’s MILES from here.” Turns out that spot fire was started by a fire that was six miles away. I called down to CalFire in Felton to let them know we had witnessed a spot fire; I forwarded a picture of the firebrand that landed, and then called another member of the fire service to alert them. We don’t use the term “spot fire” lightly, and it was important that I got the message across so they knew exactly what the CalFire prevention officer and I had seen. Up to this point, all of the fires had been outside of our district—this was the first one inside our district. Once I returned to the station, the first thing I did was review our evacuation maps. I continued working until that evening, and after obtaining more information about the proximity of the fire to our district, I decided that we needed to release a fire evacuation order. Not a warning, but an order. We would typically issue a warning first to allow residents time to collect their things and make their plans, but my experience with fires in heavy timber like this is that it can pick up a head of steam and really get going. If I had not made that decision then, we would have had hundreds of people still in that 236 drainage route. From the moment I pulled that order until the moment that fire hit, when we look at the fire modeling and progression, there’s no way we could have gotten the people out in time; there were some residences that were impacted within a few hours. If I had stayed with a warning, those people might not have gotten out at all.”

Next week: The fire grows, bringing danger and risks to the residents of Boulder Creek.