Women's Polo, Turn of the Century 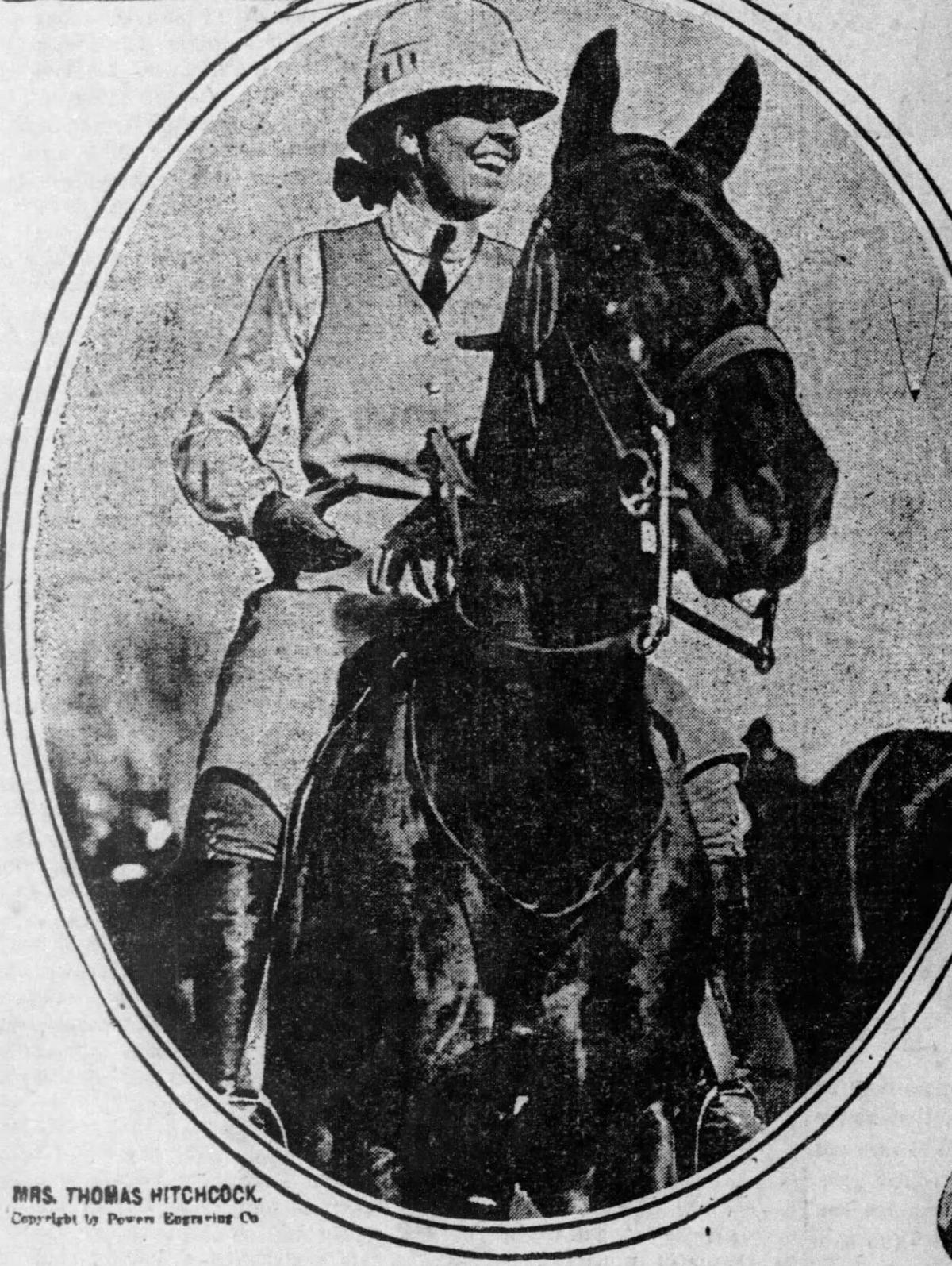 Photo credit: SF Examiner, June 1913. Louise Hitchcock, the only woman in the Polo Hall of Fame.

Women's Polo, Turn of the Century

Photo credit: SF Examiner, June 1913. Louise Hitchcock, the only woman in the Polo Hall of Fame.

The Piping Rock Horse Show, a main event on 1911’s fall social calendar, attracted horse lovers from many of Long Island’s country estates.  The judging of thoroughbreds was accompanied by field events for men and women.

On the first day, Marion Hollins successfully defended her reputation as New York’s foremost lady whip, narrowly besting three rival drivers.  The prize was a silver cup, presented by its donor, Helen Hastings, founder of the Ladies’ Four-in-Hand Club.  On the second day, Marion rode in an elite event—the Ladies’ Polo Pony Race.  The field was led by the three female Hitchcocks—mother and two daughters.  Miss Helen Hitchcock prevailed in the quarter mile dash on a sloppy track.  “It proved the most exciting event of the day.”

A decade before, Louise Eustis Hitchcock, a member of the Meadow Brook fox hunting club, had set a precedent by ditching her side saddle and riding skirt; appearing at a meet “riding astride and in a costume distinctly masculine.”  The innovation had been widely adopted—all the “prominent society women” in the Piping Rock competition rode astride.

The Hitchcock marriage was made in horse heaven.  Her Oxford-educated husband, Thomas, excelled in equine sports, especially polo—playing on the first team to give a British squad a run for their money.  When his hard-riding wife and then his daughters began to practice the sport, he was delighted.

Polo enjoyed a surge of popularity after the representatives of the United States achieved dominance over their Old World rival.  Their successful defense of the championship in June 1911 brought thousands of spectators to the Meadow Brook grounds, including Marion Hollins.  Theodore Roosevelt and Mrs. Hastings took in the action from the Hitchcock box.

That winter, Louise Hitchcock and her friend decided that the time was right to organize a woman’s club.  “Many persons think,” said Mrs. Hastings, the team’s manager, “that polo is exclusively a man’s game.  That demonstrates how little they know about it.  To be a proficient player one must be a good and daring rider, possessing firm, steady hands, an unerring aim, clear vision, a quick wit, and above all, indomitable courage.  We have scores of women who ride with the Meadow Brook hounds who possess all these attributes.”

The first meeting of the “Meadow Lark” polo club proved quite encouraging.    Before long, the fledgling club collected enough applications “to select half a dozen teams,” giving the leaders plenty of talent to evaluate.  Among the recruits was Marion Hollins.

When the first scrimmages were held on private fields owned by wealthy Long Island neighbors, it became apparent that Marion could ride and wield a mallet with the best of them.  Reviewing one practice, an observer noted that “Miss Hollins made some clever plays, in lifting the ball.  Her accuracy in hitting places her above the average player.”

The idea of society ladies invading a man’s game appealed to many sports reporters.  “Polo is going to be popular for all girls who can cover the ground like a rough rider.  It is purely a game for the present generation type of girl, who has been trained to try anything,” English newspapers, however, ridiculed the endeavor.  “The idea!” responded Mrs. Thomas Hitchcock, the team captain.  “The game that we women are capable of is far from child’s play.”  Marion Hollins agreed.  “All I can say is that I should like to have some of those Englishmen come over here and try a match with us “We ask no favors in a match with anybody.”

In June, the Meadow Larks invited the public and press to an exhibition match.   Mrs. Hitchcock took charge of the “Yellows,” while Marion Hollins and Helen Hitchcock led the “Blues.”  The scrimmage was inclusive—Thomas Hitchcock backed up his wife, while the Blues often added his 12-year old son, Thomas Jr. to their line-up.

The innovative club attracted nationwide attention.  “The women who took part in that affair,” commented a San Francisco Examiner correspondent, “astonished the expert masculine players with their skill and nerve.  This is the golden heyday when the athletic girl shines.  “The girl who does not ride well, play a fair game of golf or tennis, swim easily and gracefully, is out of the fun zone in any fashionable summer colony.  If she can also drive a four-in-hand, drive her own car and play polo, she may be considered a full-fledged graduate with high honors.”